I missed E.V.’s one year check-up.

For some reason I had the days mixed up (it was supposed to be last Friday), and for a list of very boring but understandable reasons, I totally blanked–until I got the dreaded, “Where are you?” phone call from the office. Oops. Thankfully, by a twist of fate and a bit of luck, the appointment was easily rescheduled for today–practically at the same time as E.V.’s friend, Clara’s, appointment! Yay! (Making lemonade out of lemons…)

We arrived a little early for our somewhat-impromptu play date, allowing for Emma Vance to bask in all the glory of the “well” waiting room fish tank. (Ob-sessed.) It also gave E.V. the chance to interact with another little boy who was a little older and very, um, affectionate. He had a new baby sister and was VERY into hugging “babies” (which he deemed Emma Vance), and hugged her over and over and over–while she was trying to pay attention to her fishes. Bad idea. As his mom nervously apologized, reminded him to be “gentle,” and told him that “no means NO,” Emma Vance got increasingly annoyed. She chanted, “No-no-no!” at him, and as he eventually backed her into the corner for a big hug, she pushed him away. I guess I don’t have to worry about her in life; the little lady can handle boys! He was sweet and well intentioned (although boisterous), and just as his family went back for their appointment, Clara arrived! 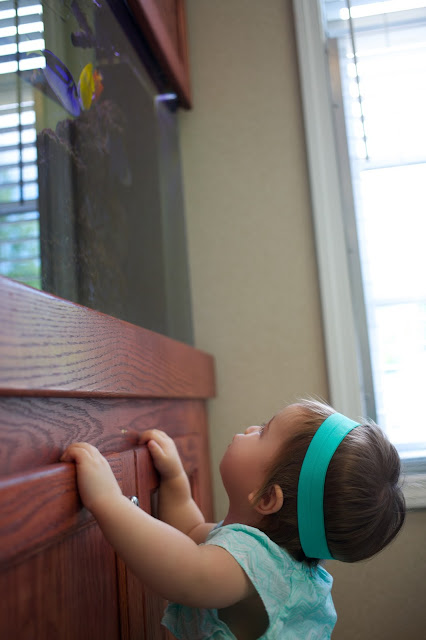 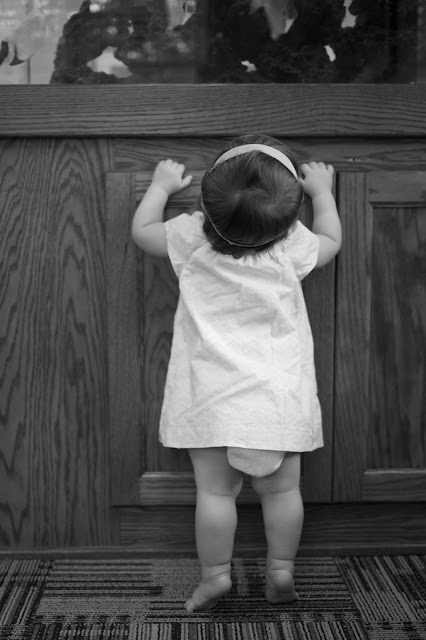 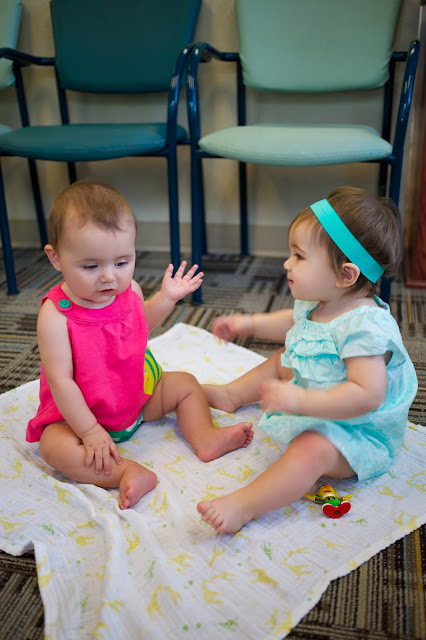 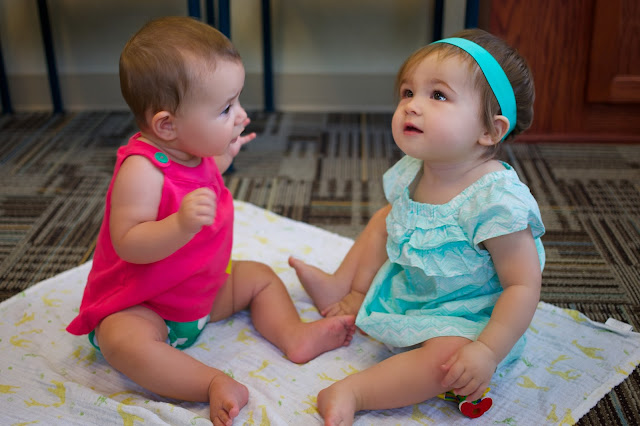 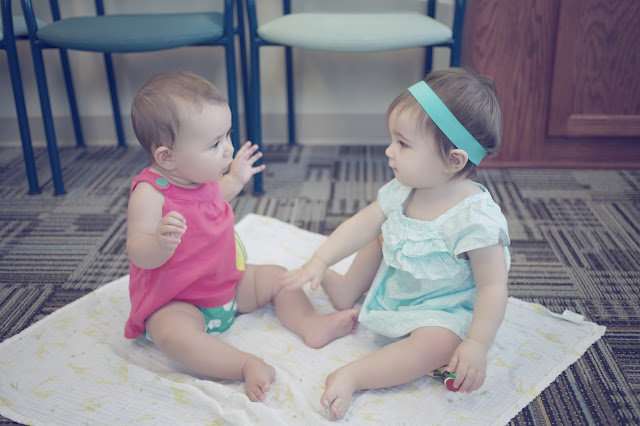 Why didn’t Alli (Clara’s mom) and I ever think of this before??? I mean, this was mom-multitasking at its best. Not only did we get to hang out for a bit with the girls, but as our appointments were so close together, we got to run into one another as we carried the babies here and there, comparing stats and stories as the appointments progressed. (Spoiler alert: Clara is WAY bigger than E.V. was at her age six months ago–and practically bigger than her even now!) However, since her appointment was 15 minutes before ours, Clara got called back before us, leaving me with a boisterous and newly lonely baby to handle in the waiting room. Cue organic corn puffs, my secret “quiet” weapon. Thankfully we only had a few minutes of overlap before meeting with the nurse to weigh-in. 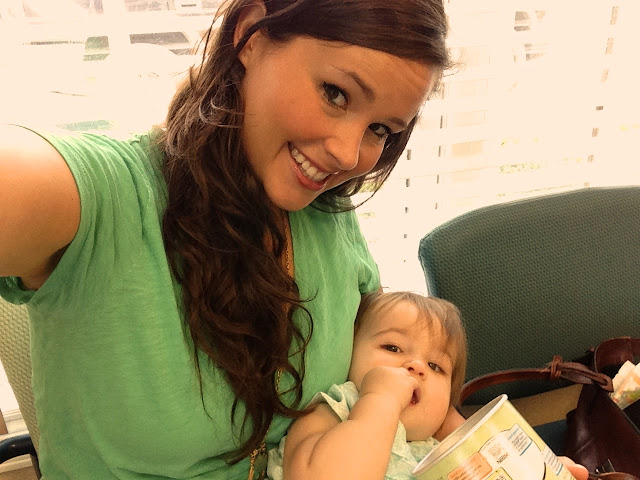 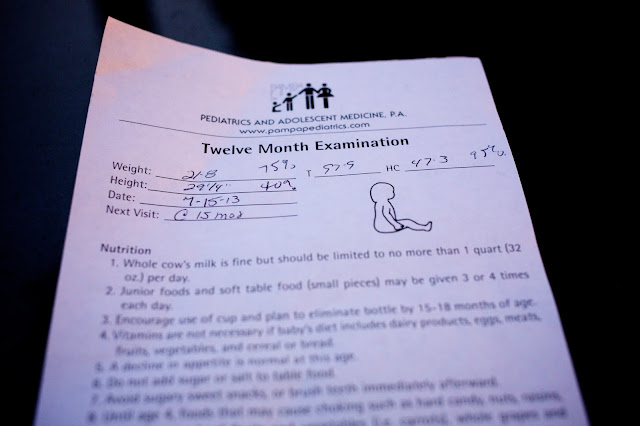 Okay, here’s the boring part: In a nutshell, Emma Vance is still short(ish), fat and brainy. Her percentiles moved around a bit, though. For height, she grew 2.25 inches and is now 29.25 inches tall; she went from the 25th to 40th percentile (not too shabby). She gained two pounds and now weighs 21.8 lbs.; she went from the 70th to the 75th percentile in weight. As for her head, it grew two cm to 47.3 cm in circumference, jumping from the 75th to the 95th percentile.
Once we were done with the stats, we had to wait for the doctor. Any form of waiting is getting increasingly difficult as E.V. gets more mobile. I was left trying to figure out how to entertain a one year-old for what felt like for-ev-er, so here’s what we did:

The doctor finally rescued me, answering a few questions then doing her examination. Everything seems on-par with Emma Vance. (Yay!) Then it was time for immunizations–and the second I laid her down she started bawling. “I know what’s coming, Mom, and you’re a meanie for making me do it!” Post-shots, I was trying to calm her down and discovered a box of books under the exam table. Score! She was still sobbing as she pulled out the books, but by the time she had emptied it and chosen one to “read,” the tears had stopped. Whew.

Does seeing her in pain ever get easier? No? Crud. At least we survived and have three whole months before having to do it all again! :) 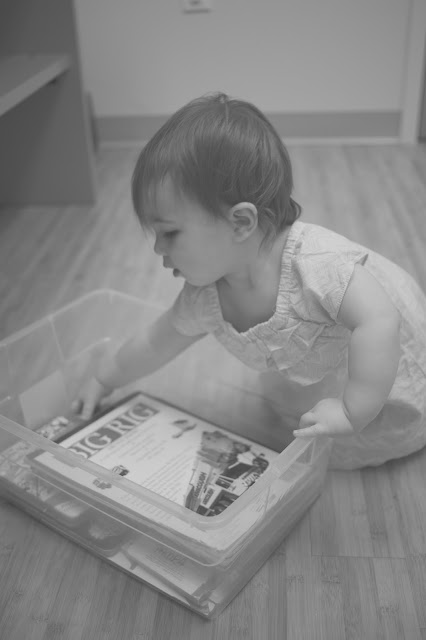 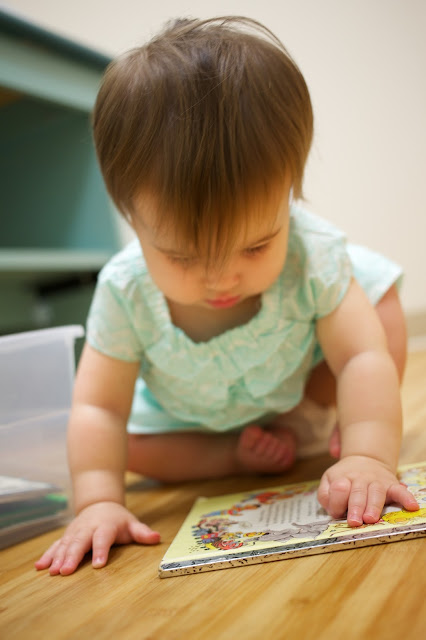