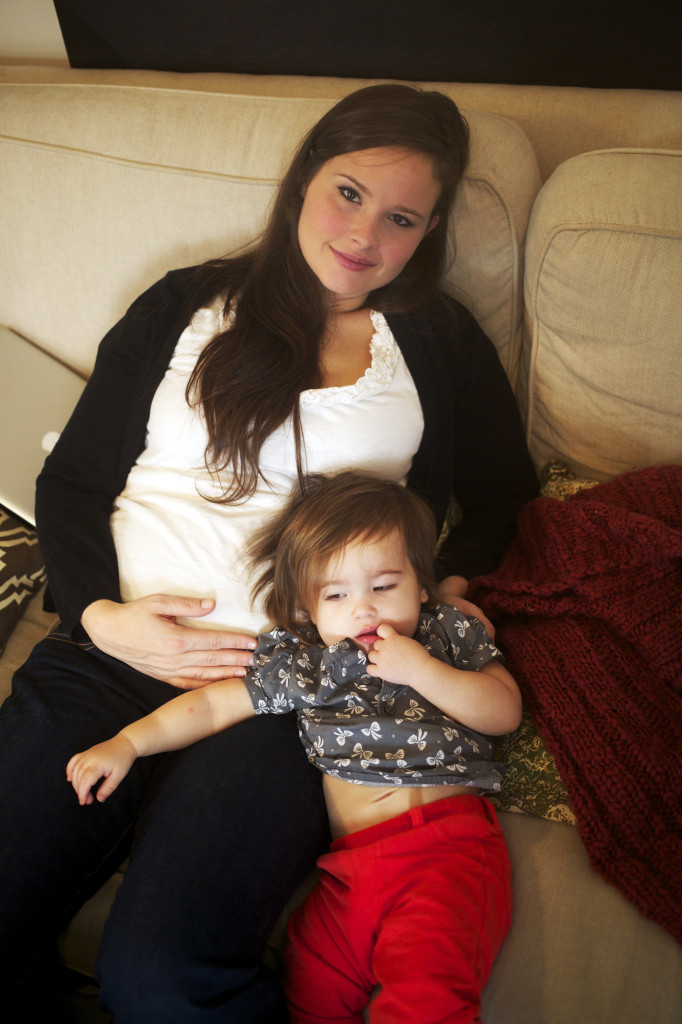 Yup, that’s about as beached of a whale as you can get! ;)

God bless all you Graceful Pregnant Women (GPWs) out there. You (secretly) know who you are, with your basketball bellies, pregnant half marathons and non-maternity jeans. Although I am not one of you, I honestly can say I totally wish I was. :)

This all began at the gym. I haven’t worked out in, well, so long that I can’t remember how long it’s been! There are a million excuses, but the reality is that if you want to do something badly enough, you will find a way to do it–and I sure as heck haven’t done it lately. With my New Year’s preparations underway, though, the looming January 1st start line became motivation to get back to the gym, and when that wasn’t motivating enough, I reminded myself of Past Talie, who worked out practically every day of her last pregnancy. (That jerk.) So this week I’m (sluggishly) back in action. In fact, today I went to a Yoga Basics class.

It was during this hour-long struggle to find my new center of balance and stretch out my cold, clammy muscles that I began pondering GPWs. (Geez, thanks God, for surrounding me with skinny friends who post-partem-ly walk out of the hospital with flat stomachs. Maybe You could let that be me one day? Pleeease? ) I don’t hate GPWs like a lot of us non-GPWs tend to do; no, I in fact I’m openly and good-naturedly jealous of them. :)  Could you imagine?!? What a way to experience pregnancy: Regular clothes! Exclamations of praise on “how good you look” everywhere you go! Laughing about eating three pieces of cake “because, after all, I am eating for two” while never worrying about weighing in at the doctor’s office! Walking like a normal human being despite carrying a person in your belly! Looks of disbelief at having given birth just days before when someone sees you holding a newborn! Ahhh…that’s the 30-something female dream. As for me? I just waddle around, watching my face get rounder every day (Seriously. Not. Fair.), living vicariously through my GPW friends…secretly wishing that I could join their club.

I, however, will never realize that dream. And I’ve come to grips with that fact. So, instead of lingering on what my genetics will never allow me to be, let me talk to all my APW (Awkward Pregnant Women) sisters. If I’m being honest, when I see another APW out there, I want to just hug her and say, “Me, too! Me, too!” but you can never tell an APW that she is one–although, let’s be honest, we know who we are. :) The reality is that we are the majority, that we are just going through a phase, that no matter how hard we try to dress up that bump to look like a GPW, we simply aren’t made that way. And that’s okay.

It was in yoga today that the reality of being okay with my APW-ness hit me. I was red-faced and sweaty, staring at myself in the mirror while I unsuccessfully pushed my baby belly to the side in an effort to get closer to the floor; everyone around me (including the old lady to my left) was practically face-planted on their mats while I was still straight-armed and upright. Bah. That’s about as far as I can go today. I began to think about a GPW friend of mine whose nine-month belly is so cute and tiny compared to my six-month belly and how she would be so much more graceful in the pigeon pose than I was, and I began to feel bad for my APW self. But it was at that exact moment that the instructor looked right at me and said, “Way to go, Mama-to-Be! You’re hanging right in there!” (She probably thought I was like two days away from giving birth because my tummy is getting so huge so fast, but whatever…I’ll take the compliment even under false assumptions! ;) ) And you know what? I was hanging in there! True, I was wobbly and stiff and encumbered by the extra belly bulge, but I was doing it. It doesn’t matter that I’m just a GPW wannabe. My APW self is working toward adding another precious little girl to our family, and that’s what matters. So, all you other secretly-sad APWs out there take heart! This too shall pass, and until then, let’s just hold hands and waddle down the street together in our sweat pants, okay?