In addition to Ryan’s unexpected doctor’s visits this week, I also took Emma Vance for her six month check up. Her appointment fell nine days before her six month birthday due to the office’s abbreviated Christmas schedule and was perhaps the least eventful of our appointments with the pediatrician thus far. After Ryan’s shenanigans, I’m very thankful for that!

Overall, Emma Vance’s growth is right on track. At six months (or so), E.V. weighed in at 16 lbs. 4 oz. (55th percentile), having gained exactly two pounds since her fourth month appointment. She is 25.5 inches tall (45th percentile), adding another inch and a half to her height. The surprise of the day was that her head only grew two centimeters, so she’s moving toward “normal” in her head circumference. (But I’ll always think of her as my brainy baby regardless! :) ) Basically she’s pretty normal, which is a blessing. 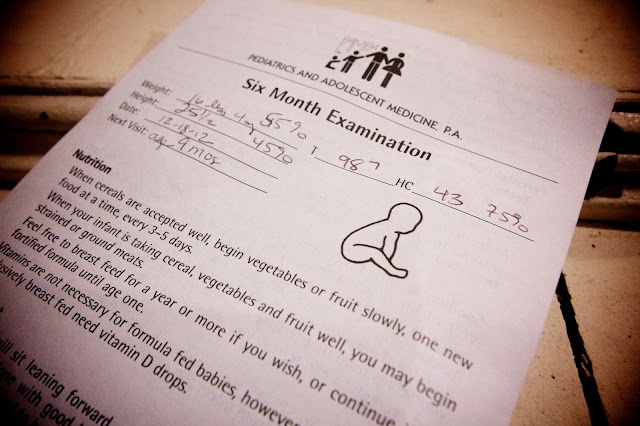 Emma Vance showed all the proper developmental signs–sitting up, standing up straight with some help, attempting to crawl, grabbing at and chewing on the necklace while the doctor talked, babbling, etc. I made the appointment so long ago that I failed to recognize that it fell during her current morning nap time, so she was a bit lethargic compared to her normally energetic self; however, she was so fascinated with everything around her (including the sanitary paper on the examination table and the fact that she can now roll around on it) that she kept herself awake until the end of the appointment.

This was the last of the “tons of shots” appointments (thankfully), and although I had scheduled Ryan to come with me, he had a last minute meeting with a client. (Zach Morris always gets out of bummer situations.) We all know that I HATE when she has to get shots, so I had prepared myself for a terrible day with a fussy, sleepy baby. She needed four shots this time around, and although it was terrible and she bawled, she recovered much more quickly than before. In fact, she was smiling before the nurse left the room! She did pass out before we left the office, but this time I think it was as a result of skipping a nap and not from getting immunized. In fact, although I cuddled with her during her afternoon nap so that she’d sleep a little longer than normal, she was surprisingly on schedule! (The past two times she slept most of the day after getting shots.) It was a totally unexpected “win.” I guess she’s just growing up and able to deal with the pain better, but secretly I attribute her great recovery to the fact that the doctor got new Band-aids. Still Snoopy, but at least they’re new! ;)

Even though the new Band-aids aren’t as upsetting of a sight as the old Snoopy bandages, we did take the opportunity to try on E.V.’s Baby Legs (compliments of Aunt Jill). Sassy and a way to cover up her boo-boos? Perfect. 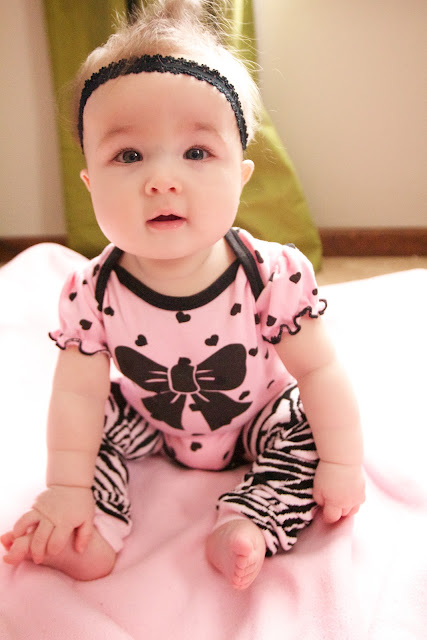