Over the past week or so, Emma Vance has been developing some new, um, habits.

The most endearing of these new habits is what I like to call Ol’ Scratchy Hands. She’s been grabbing at objects for a while now, but her interest in “feeling” stuff has really peaked recently. Coincidentally, this newfound mode of exploration happened in conjunction with her nails becoming super strong. Up until this point I’ve been able to handle her little hang nails without any tools, but now her nails aren’t quite as pliable and I have to admit: I’m freaked out at the thought of clipping them. Cue heebie jeebies. I figure that as long as she doesn’t do any real harm with her little razor fingers, I’ll procrastinate on cutting them down. I say all of this because since I handle E.V. the most, I’ve gotten a bit scratched up lately. In fact, I’ve gotten scratched up a lot recently! I don’t mind, though, because it’s so sweet and makes her so happy.

Beyond simple curiosity, her scratching is also a comforting action, so she scratches around as she falls asleep on me. (She also rubs her little foot in a circle as she drifts off–which I do too! It’s a weird quirk and the first time I felt her do it I was totally freaked out and excited. Anyway, back to the scratching…) I LOVE when she does this because she did it in my belly, and many times when I was worried that she hadn’t been moving it was her little hands scratching around that reassured me that she was okay. I know this is only a temporary phase that she’ll grow out of, so I’m reveling in it as much as possible right now.

Her next latest trick is biting on her own bottom lip. I have NO IDEA where in the world she became fascinated by her bottom lip, but it’s become an obsession of hers over the past week. She’s been spouting a few “moms” and “mamas” as she’s had her little lip captured, which I of course love to hear, and her little “mmmmm-ing” cracks me up. In fact, her little mimicking sounds extra hilarious when she sucks on her bottom lip; it’s like a little ventriloquist act! She’s still parroting something that sounds like “Help me!”–which is super funny being said through a closed mouth. It’s a strange habit, but I suppose it’s an easier one to break than thumb sucking or pacifiers, right? 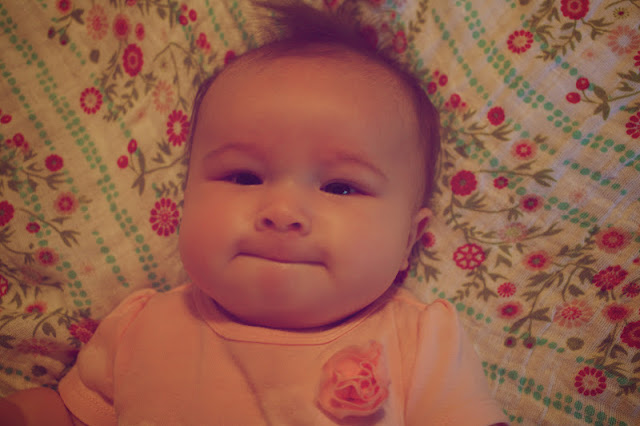 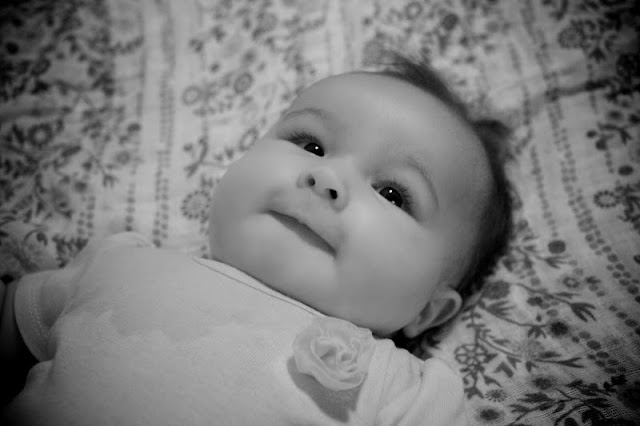 The final trick I’ll mention here (because these days there are A LOT) is screeching. I feel so bad for E.V.–she wants to be mobile more than anything, and she spends so much of her day frustrated that she’s stuck. She’s always complained in her little baby ways (grunting, stretching, crying) when she hasn’t been able to move herself at will, but lately she’s resorted to screeching. The first time it happened I was alarmed (for obvious reasons), but now after it happened a second and third time, I realized that she’s using her little voice to will her body to move. It cracks me up. Atta girl! When she does screech, putting her on her belly gives her a new body position to work with and quiets her down. She’s great at rolling over from this crawling position and can wiggle back and forth, but until this little lady can go 360 degrees easily, I’m afraid the screeching is here to stay. How do you tell a baby to be patient? :)

Overall, Emma Vance changes everyday, learning and developing in surprising and entertaining new ways. I wish that I could capture every moment on film, but I have to live life and not be obsessed with remembering it more than with living it. If only I could invent a way to capture everything my eyes see–I’d be a millionaire!