Emma Vance is a total crazy baby these days, busy as ever and into everything. We’ve given in and added anti-pulls to many of our drawers and cabinets, put up the baby gate and hidden the valuables. Our ongoing struggle with the dog bowls remains, though, and seems to be getting worse.

To be honest, if I’ve got a pressing chore and I know E.V.’s got her little hands into something, I evaluate whether or not to pull her away from her entertainment by assessing how long it will take me to fix whatever she’s messing with; if the clean up time is less than the time it will occupy her attention, she’s in luck. :) For example, we have a low cabinet with plastic cups that she particularly likes; it’s in the kitchen (where I usually am) and emptying the cabinet and sorting its contents takes way longer than clean up does, so restocking the items has become a several-times-a-day task lately. The dogs’ bowls, however, are another story.
I don’t know what it is about them. Perhaps it’s the noisiness of the hard kibble against the ceramic bowl or the splashiness of the water, but if E.V. is out of sight and quiet, chances are she’s making dog food soup. The ritual goes like this:
First, throw 90% of the dog food onto the kitchen floor and giggle as Oscar and Olive race to gobble it up. (The three of them, by the way, are totally in cahoots.) Make sure that some of the dog food rolls in the crevices Mom can’t reach, of course, because that will be great entertainment later when she has to crawl on her hands and knees to clean it up.
Next, dip your tiny, chubby baby fingers into the dog’s water, giving it a good splash so that the floor gets nice and wet. Don’t be afraid to try a foot or two, too, if you’re feeling adventurous.
Finally, in the penultimate act of baby-playing-with-dog-food entertainment, combine the two. Piece by piece, slowly add the remaining 10% of kibble to the water bowl, watching as it soaks through and becomes soggy. Oscar will be rather thankful as he slurps up the yucky stuff and will repay you with his undying affection.
Voila! You’ve successfully created dog food soup!
What to do, what to do? In our next house I plan on moving those tempting bowls into the dogs’ private area to be permanently blocked by baby gates, but Amityville doesn’t have a mud room or area that would work well. So, for now, I’ll settle for yelling, “Emma Vance, do NOT touch the dog bowls!” into the kitchen at the first sound of scattered kibble—which happens about ten times a day. I suppose that if the dogs don’t mind helping with the majority of the clean up then I can’t complain toomuch, can I? ;) 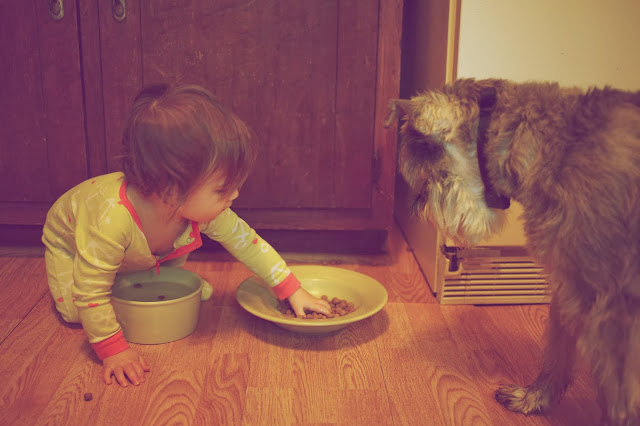 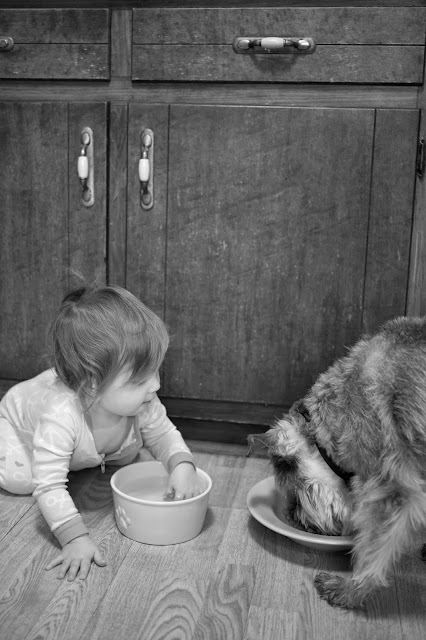 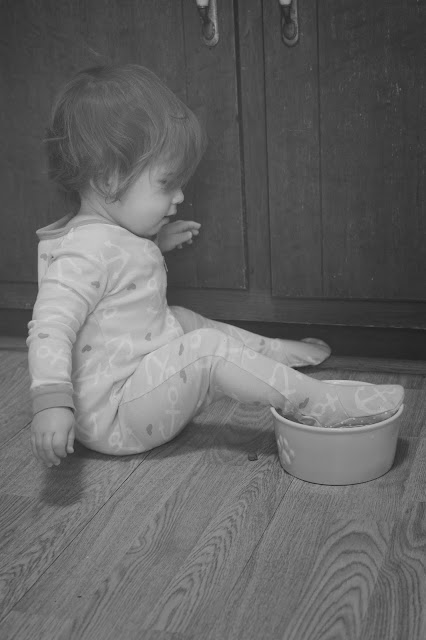 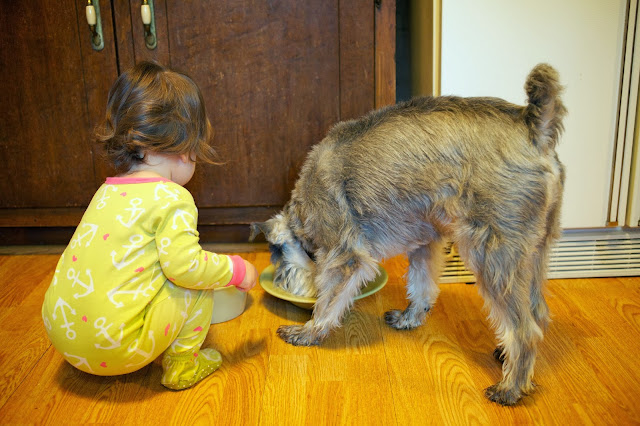