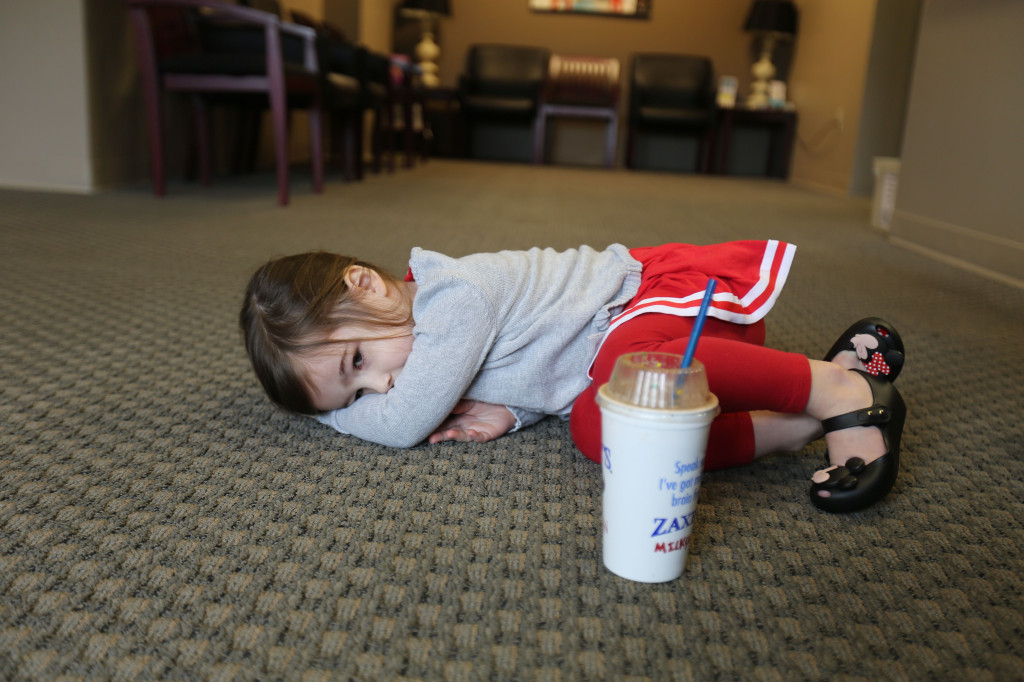 Well, it’s official. The Shoves are henceforth disowning Valentine’s Day. It seems while everybody else smooches and buys flowers and brags about their significant others on social media, we’re stuck getting the crap end of the holiday over here. It’s as if everyone else in the universe has marked their thresholds and the Valentine’s Day Curse has passed over their houses without so much as a glance, but we somehow missed the memo and have felt the V-Day wrath.

You may remember we all assumed that my last February 14th pretty much qualified as the Worst Valentine’s Day EVER. I attempted to make E.V. and Cricket heart pancakes, but instead got a face full of hot oil. The squeeze bottle busted, and when the batter hit the pan, that was the end of our fun Valentine’s breakfast. The following hours, days and weeks were awful but got progressively better. I saw a slew of medical folks: ER personnel, wound doctors (yes, that’s a thing), dermatologists — heck, I even saw a plastic surgeon. The burns on my arms were bad, and I spent weeks continually changing bandages. My face, however, was my biggest concern for obvious reasons. The days after the incident showed me a lot about myself — that I’m a preparer (most of the doctors basically told me they couldn’t do anything until the wounds had healed), that I’m impatient (see previous parenthetical, haha), that my vanity isn’t quite as deep as I though (“No makeup for two months? Okay!“), that I over explain myself (sorry if I ran into you post-burn, pre-healing)…but in the end, life moves on. I spent the spring nursing my burns, the summer avoiding ALL sun, and then, well, everything pretty much faded into a story from my past.

Until February rolled around again.

I can’t believe it’s only been a year since my Valentine’s Day Massacre. It feels like a decade ago, and I’m thankful for that. A year later, my burns are almost indiscernable, praise God. I know it’s completely vain to admit, but I just didn’t want to walk around with scars on my face for the rest of my life. My healing was nothing short of miraculous, and I couldn’t be more pleased. I had planned on this entire post being about my recovery and healing process, but today proved that the Valentine’s Day Curse is an annual occurrence around here.

This year we had some very simple plans: Go to church. Make heart-shaped pancakes (because Talie Freaking Aquilio doesn’t let a challenge beat her). Have a nap. Enjoy Sunday yoga. Take a family trip to Chuck E.Cheese’s. None of those things happened.

Instead, we had an awful day. Cricket got a wretched stomach bug. (She started throwing up at 3 a.m. and was still barfing at 8 tonight.) Emma Vance woke up with a swollen face and a killer bloody nose. (Yuck.) Then I ran out to pick up bagels for breakfast in an attempt to cheer up our morning, but they burned them. (Seriously??) Cricket napped all day, and I spent every free moment between caring for my sick baby and entertaining my preschooler sorting, hanging and putting away an entire two-year old’s wardrobe (a project I started yesterday before realizing how monumental a task it was). I tackled heart pancakes for lunch while Emma Vance enjoyed watching copious amounts of television. Then, out of nowhere she started complaining that her ear hurt after lunchtime. Within an hour E.V. was sobbing and inconsolable, and I had to call my poor, dedicated husband home from working (yes, on a Sunday, on Valentine’s Day — #selfemployed) so that I could run her to the urgent care facility. She cried on the way there that she didn’t want the doctor to take her ear off, so I consoled her with a chocolate-and-sprinkles milkshake. Once quickly diagnosed with an ear infection, I took her to the pharmacy to fill prescriptions for antibiotics and ear drops. Emma Vance wailed while we waited, which hastened the pharmacist ZERO. I was then informed that they no longer make numbing ear drops (!?), and my substitute was Ibuprofen (not good enough). Then Ryan and I then spent the evening trying to coax E.V. to take her meds (sheesh). Cricket roused from her napping and demanded a bath, and E.V. joined her since she seemed to be feeling much better — until she barfed in the tub. New shower. Dry jammies. Bedtime for all, but since Ryan needed to keep working I handled both girls’ nighttime routine myself, meaning that I stuck all three of us in E.V.’s bed to lull both girls to sleep. Within a few minutes of Cricket passing out, I started to move her to her own bed, but she instead threw up again. New sheets. New shower. Dry hammies. Bedtime again, this time on a pee pad on our stripped-down master bed. (Seriously, I have done so much laundry today!)

I suppose that technically getting third-degree burns on your face and arms constitutes a worse day than some barfing and an achy ear — unless it’s your kids who are in pain. Overall, I just want to cry, “UNCLE!” to this wretched Valentine’s Day Curse and move on with my life. However, we all know that bad things come in threes, so V-Day 2017, I’m ready for ya’! ;)

Here’s my face and arms, one year post-accident! 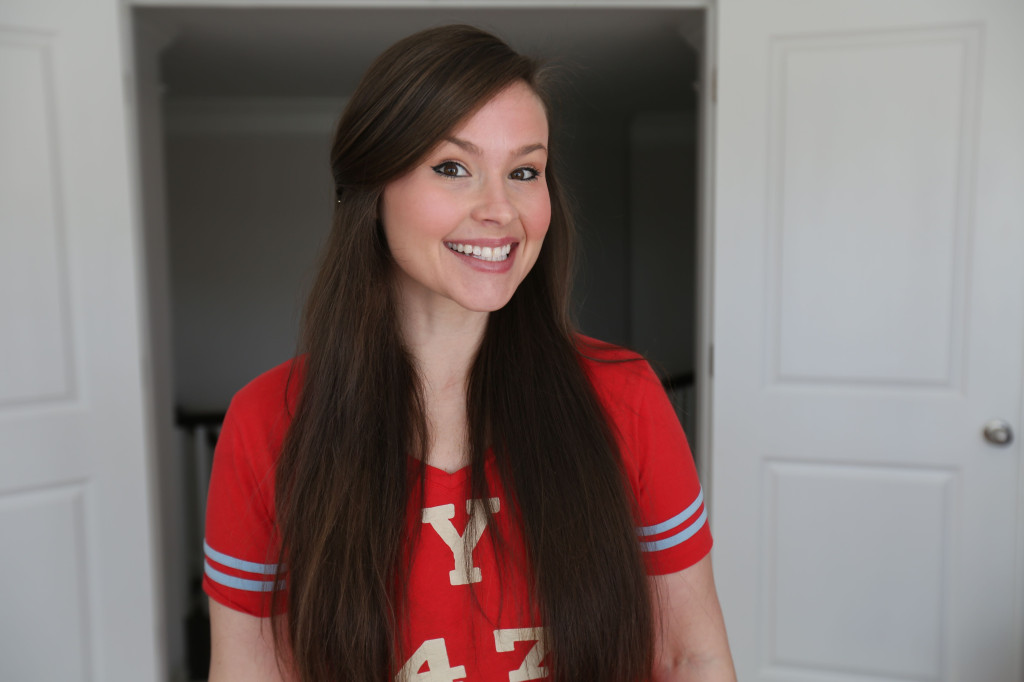 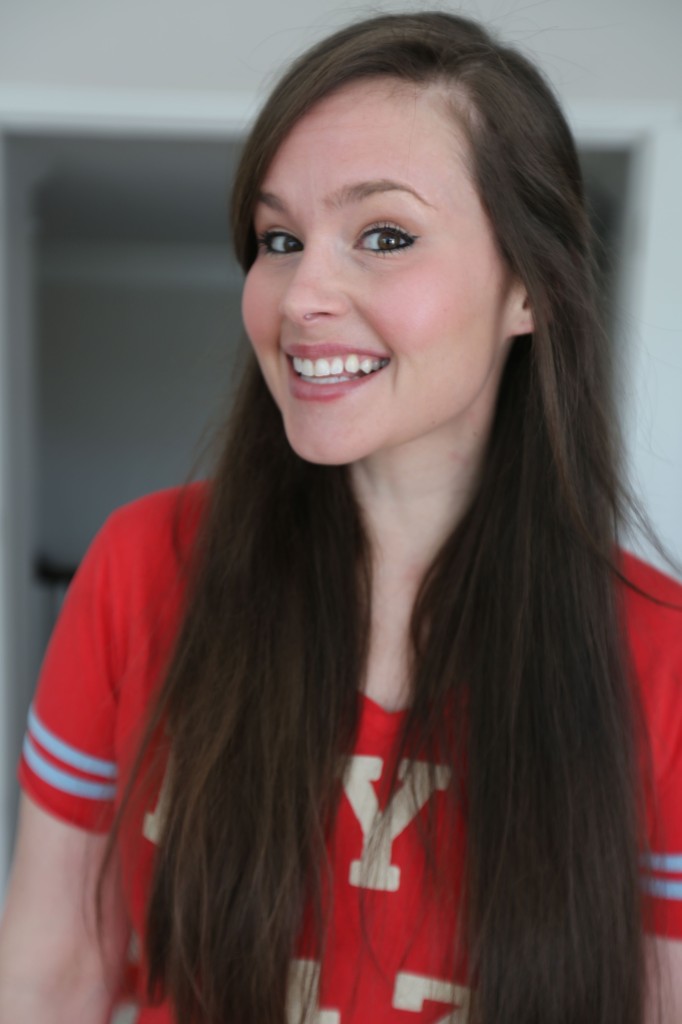 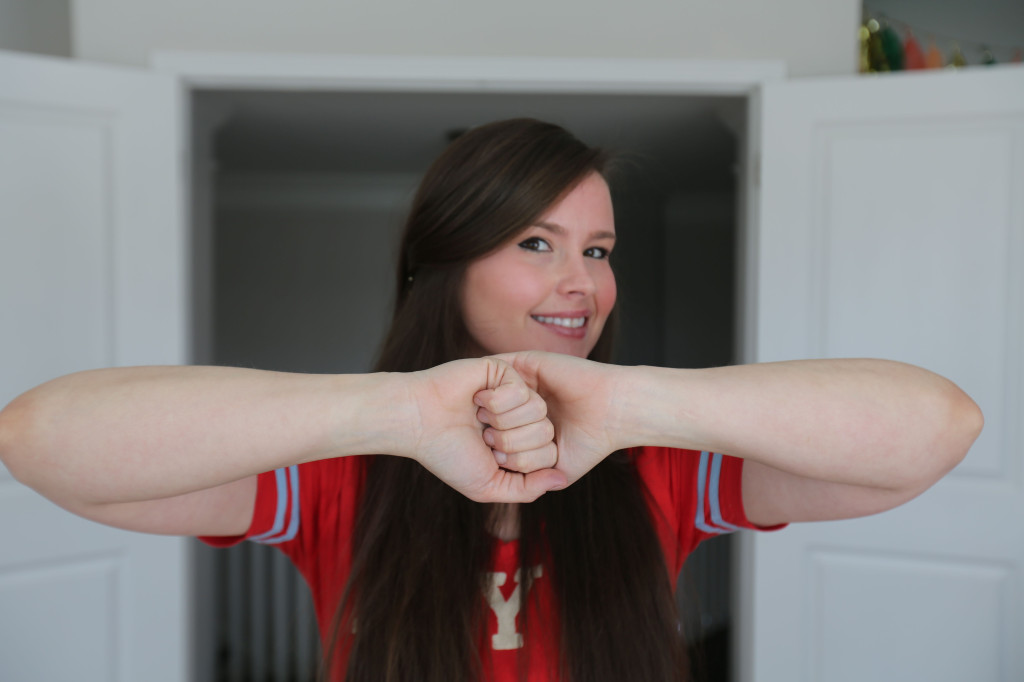 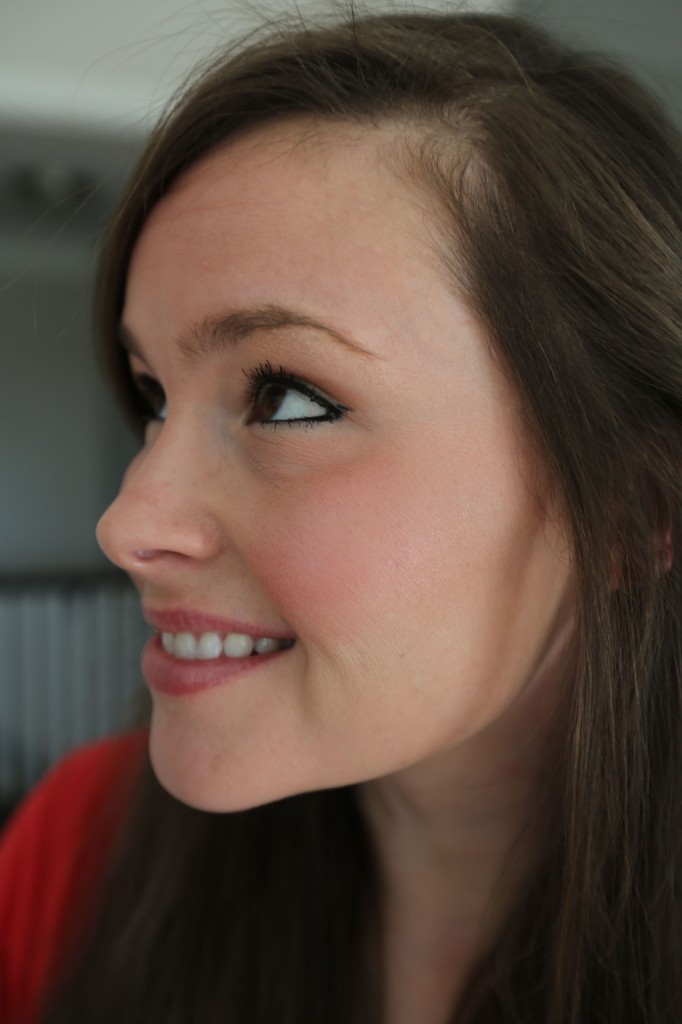 Now onto the curse… 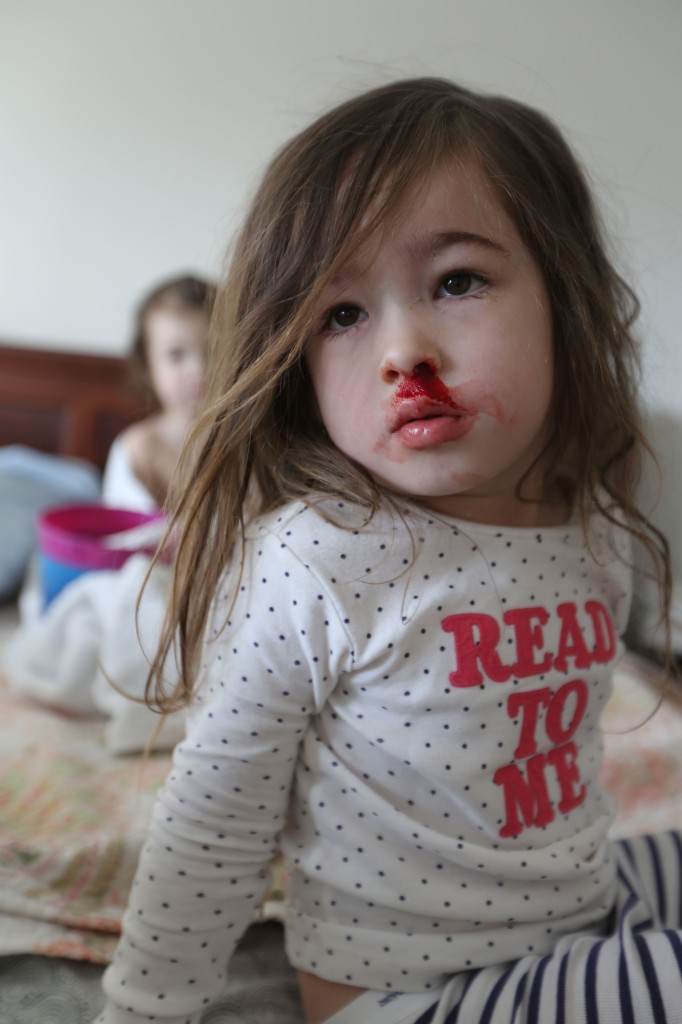 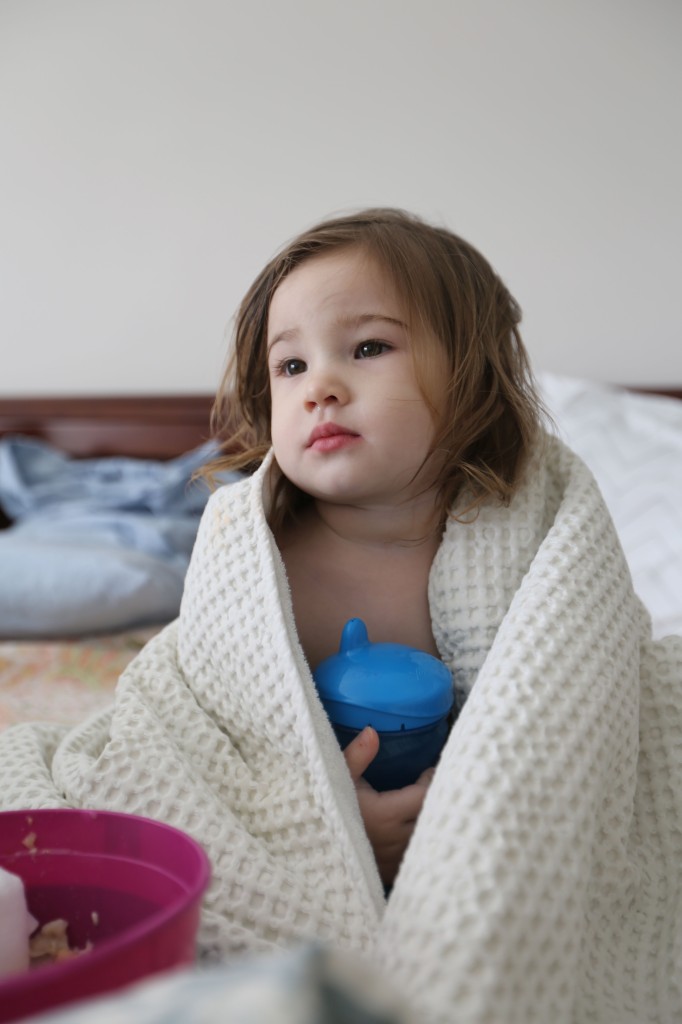 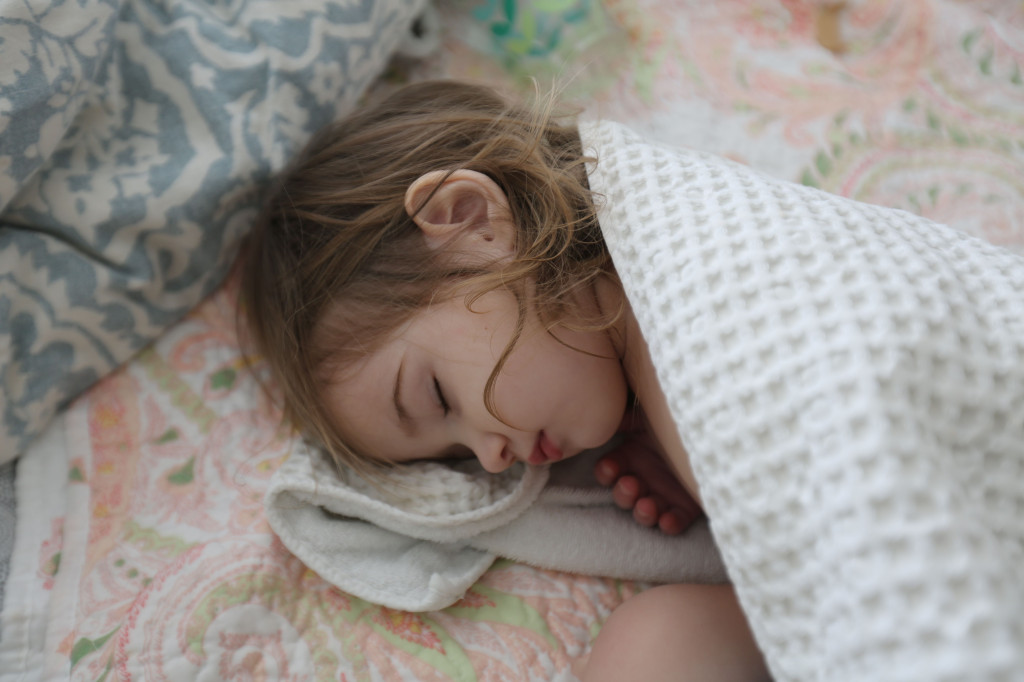 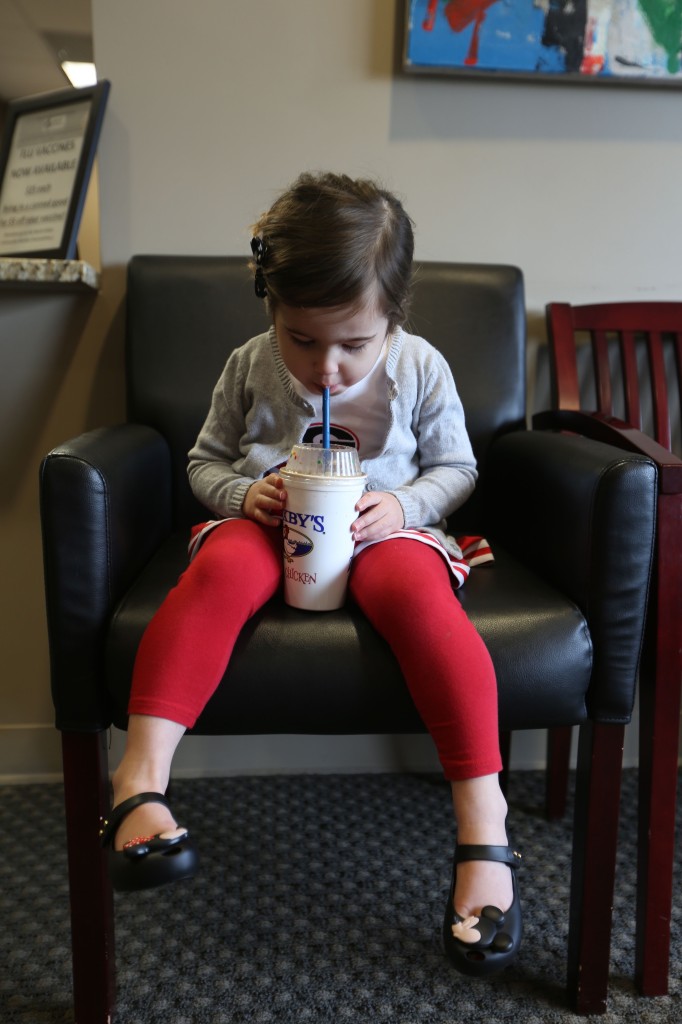 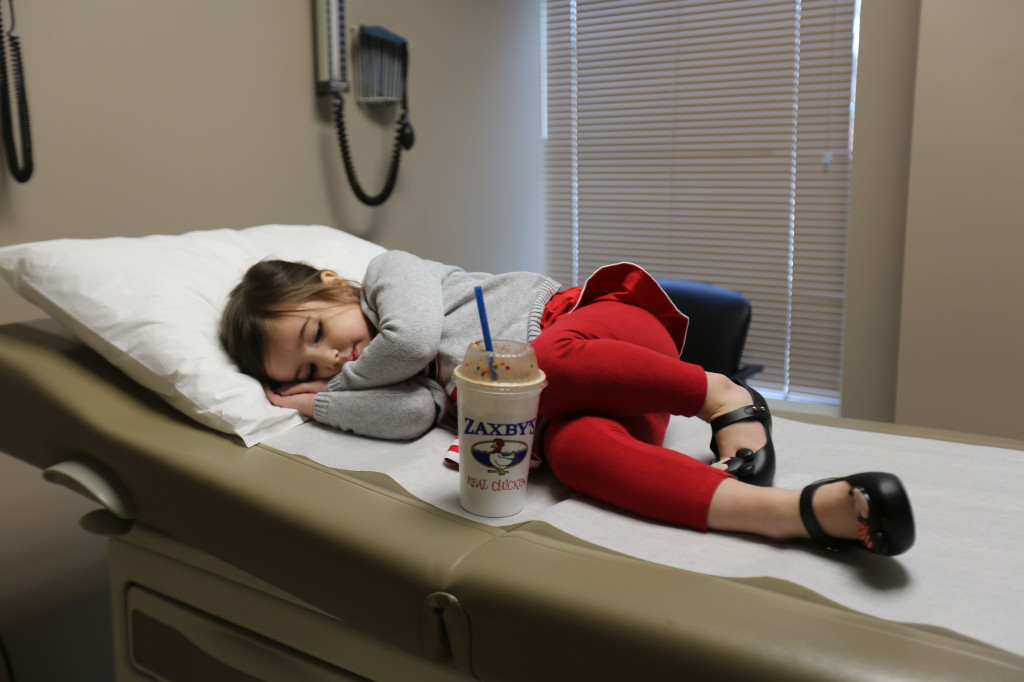