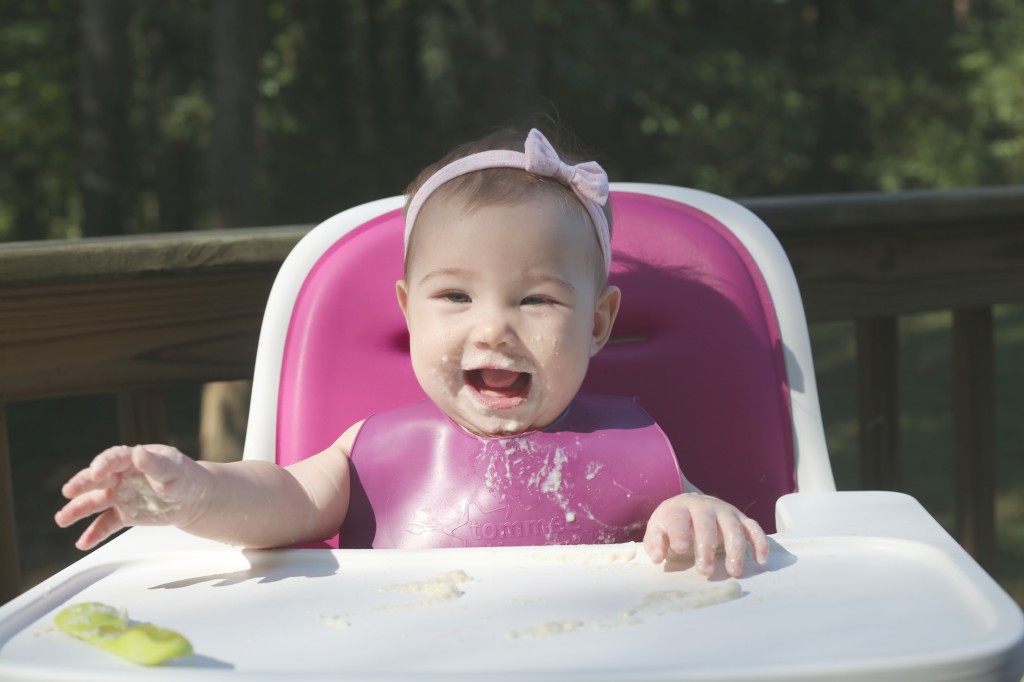 Way back when I was pregnant with Emma Vance, I read a study that showed a correlation between feeding your baby solid foods before six months of age and obesity issues later in life. (And, yes, I realize that the study is probably flawed, but sometimes something just gets in your brain!) For whatever reason that particular study stuck with me, and I vowed to not let E.V. have a bite of real food before the six month mark, which I didn’t. I had the same intentions with Cricket as well but, man, was it harder this time around!

Cricket is into anything that E.V.’s into, including food. Since she began crawling earlier than expected, it shouldn’t be surprising that she wanted to eat earlier than expected as well. She’d cry and whine and grasp at food like a maniac anytime it was within reach. It didn’t help, either, that I had a “helpful” toddler this time around who thought it was kind to “help” feed her sister. Truthfully, we’re probably lucky that Cricket hasn’t choked yet; on a handful of occasions I’ve turned my back for a split second only to catch Cricket with a bite of pancake or cheddar bunny in her mouth. In fact, the first time it happened, Cricket had crawled over to Emma Vance and taken a whole half of a banana from her. By the time I caught her, she had clearly (and happily) taking a few successful bites. (Seriously. Who is this big kid?) However, I was resolved to make it to the six-month mark, so I repeatedly dealt with Cricket’s tears as I took food out of her tiny, chubby hands and told her to slow down a bit. ;)

All of that being said, as Cricket officially turns six months tomorrow, I finally gave in and decided to start solids today. (Ryan was home, so it worked out for him to be there for this milestone.) As I prepped her first meal, I couldn’t help but remember back to when E.V. started eating real food and what a big change it was; I know that life is going to be more complicated and messier from here on out, that Cricket is beginning to need me less and grow up more. It’s a bittersweet transition, and even though “it’s just food,” I don’t take it lightly.

So this morning Cricket had her first bowl of oatmeal, and she loved it (as expected). Although I chose a much slower progression with my first kid, I decided to skip right ahead and give my second kid some eggs and puffs for dinner on Day One. I remember when a friend of mine handed E.V. a handful of dry cereal way before I thought she could handle it, and I almost died. She looked at me like I was insane (since her youngest one was chomping away happily), and I had to explain that E.V. had just started eating puffs, which are melty and definitely not a choking hazard. She laughed, but never said why. Today as I watched Cricket pick up tiny bits of scrambled eggs from her high chair tray, I finally understood. 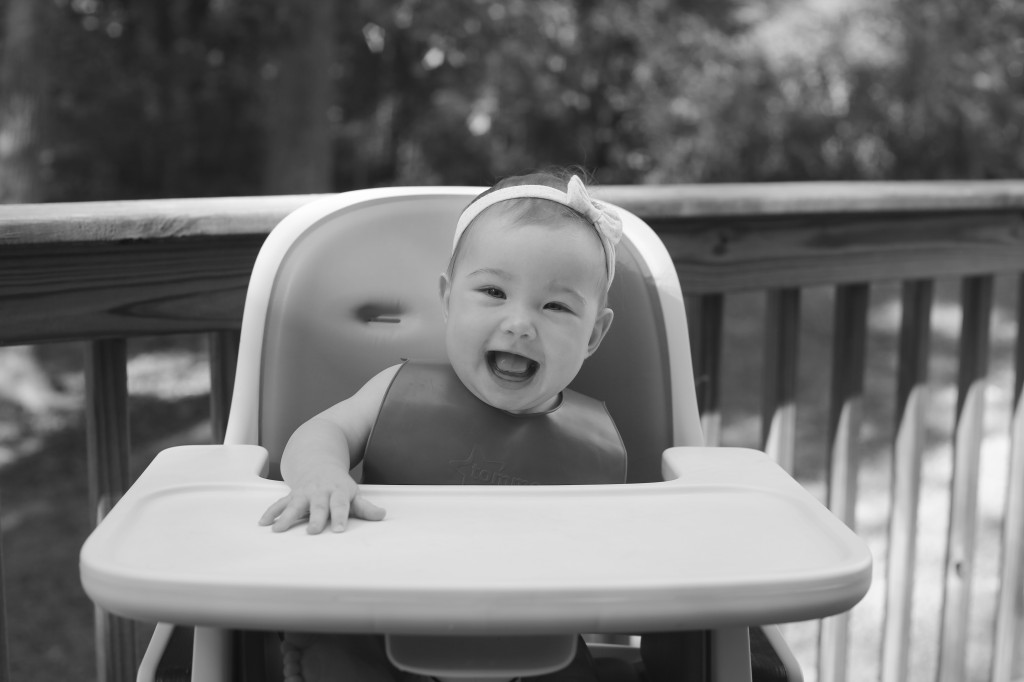 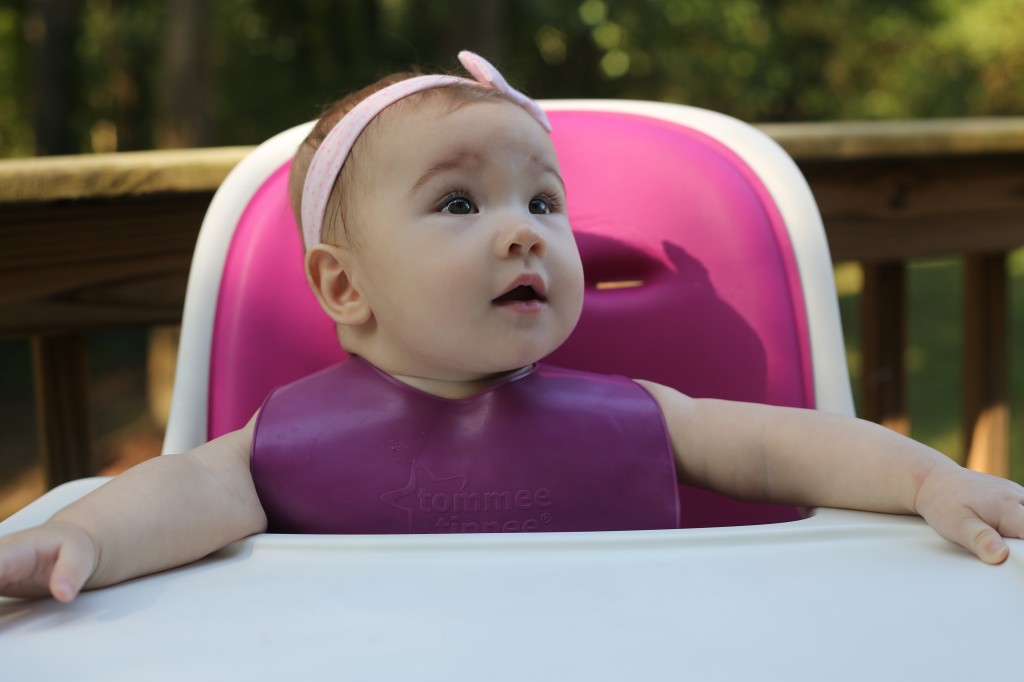 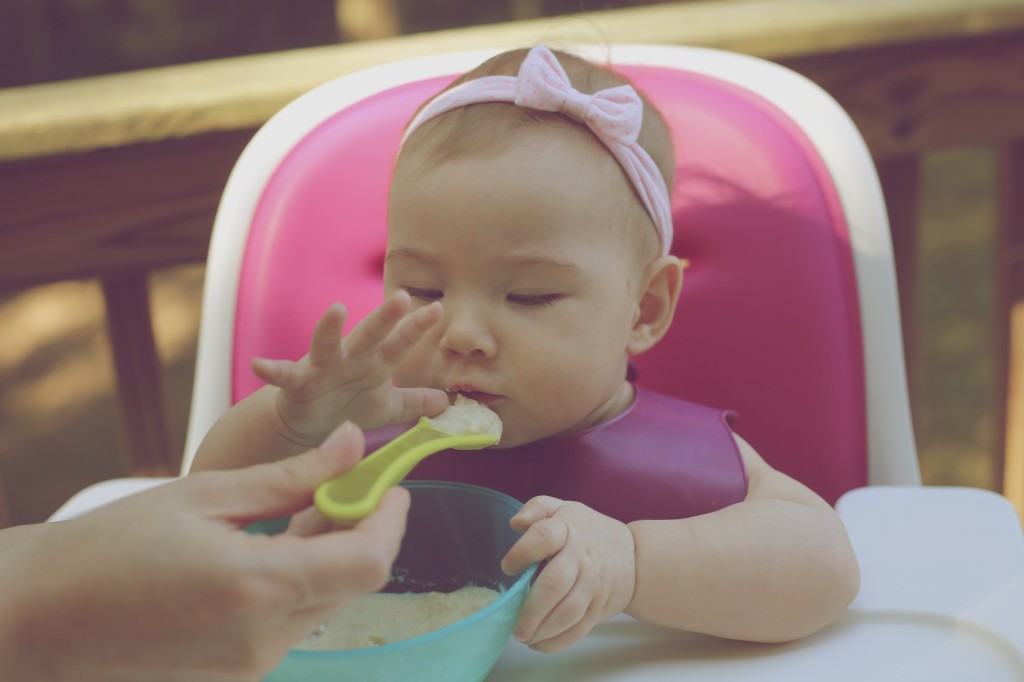 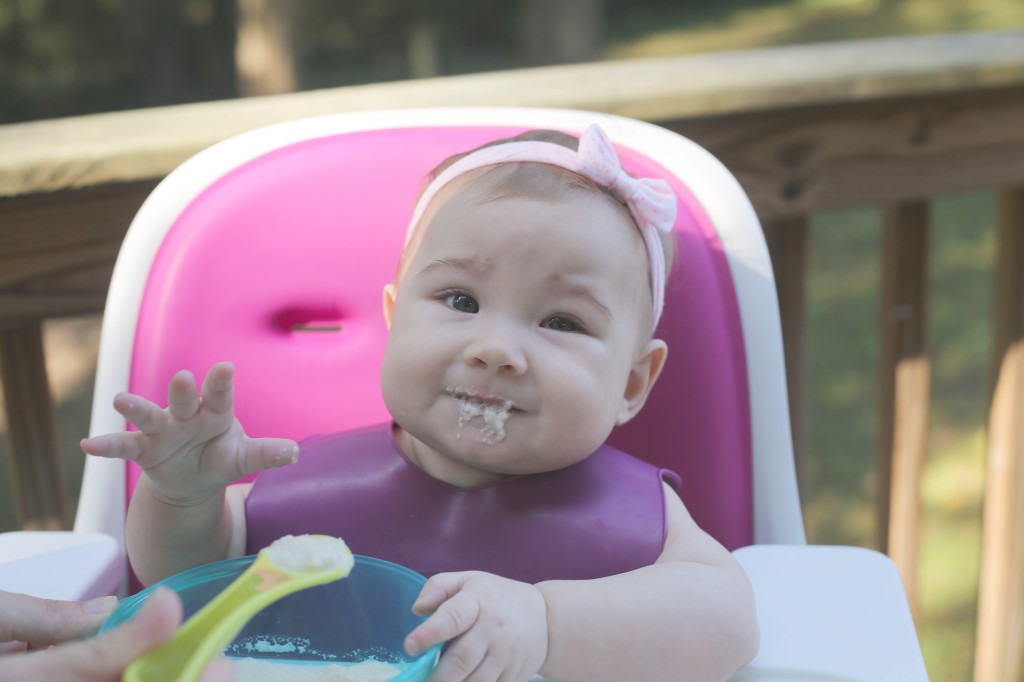 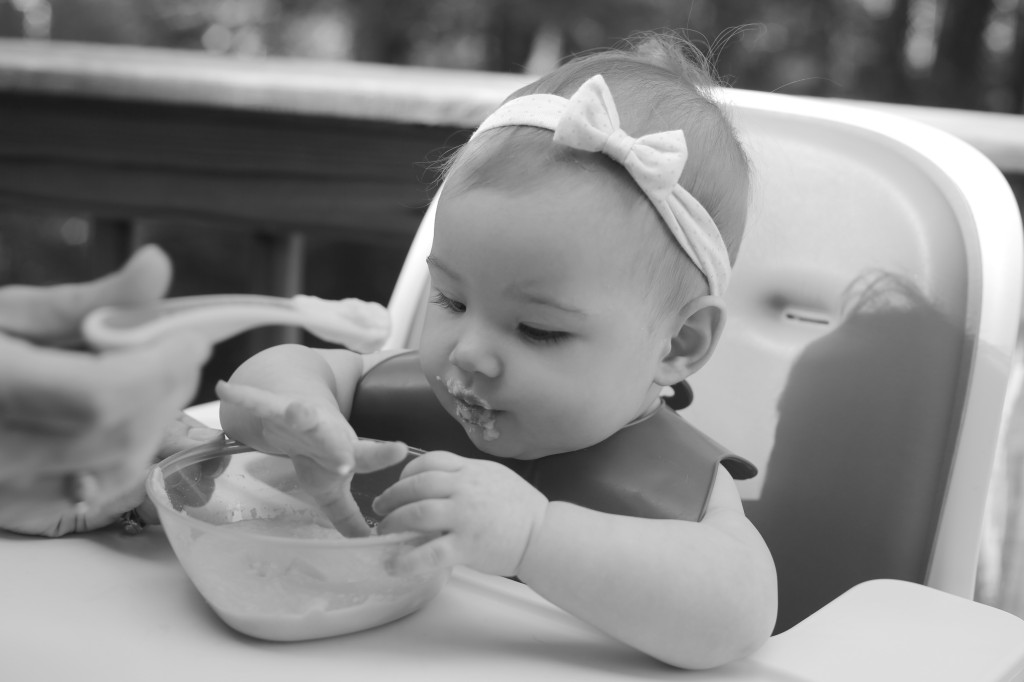 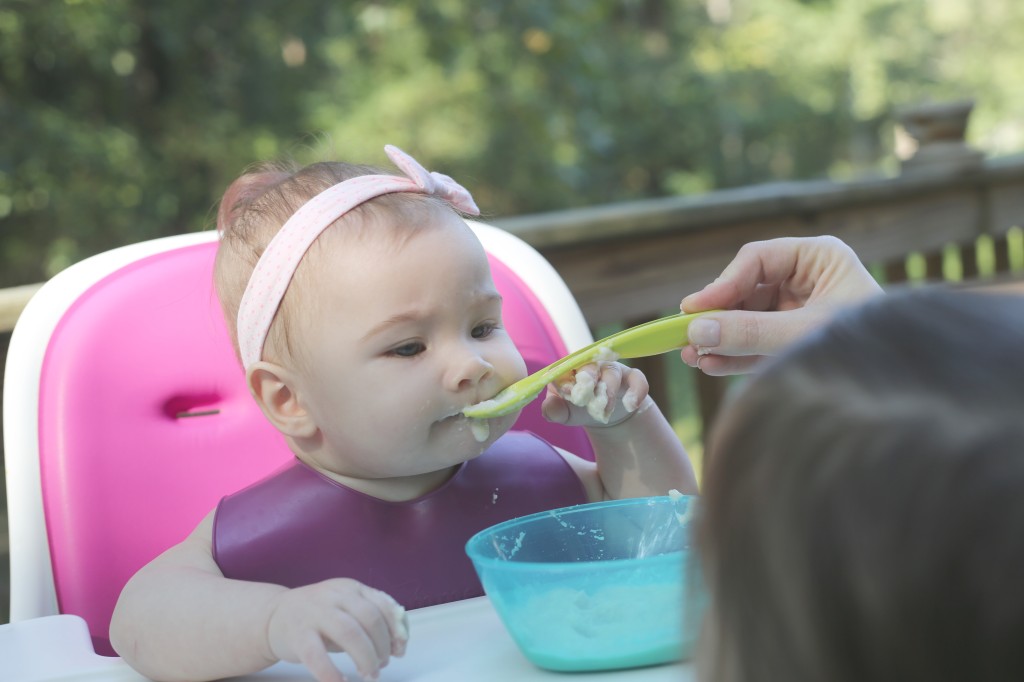 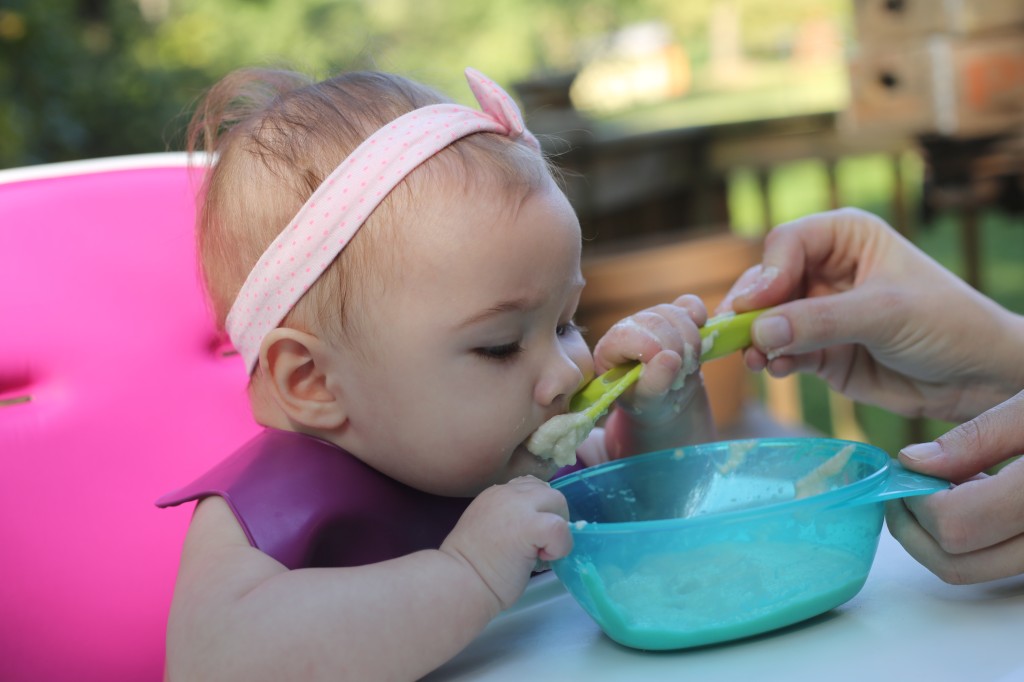 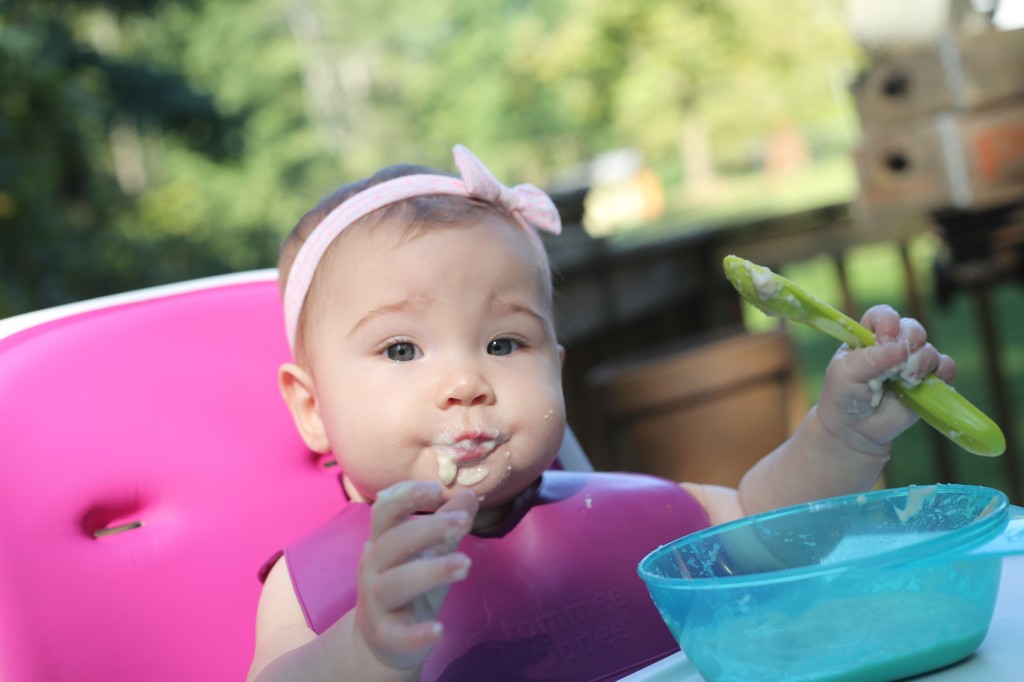 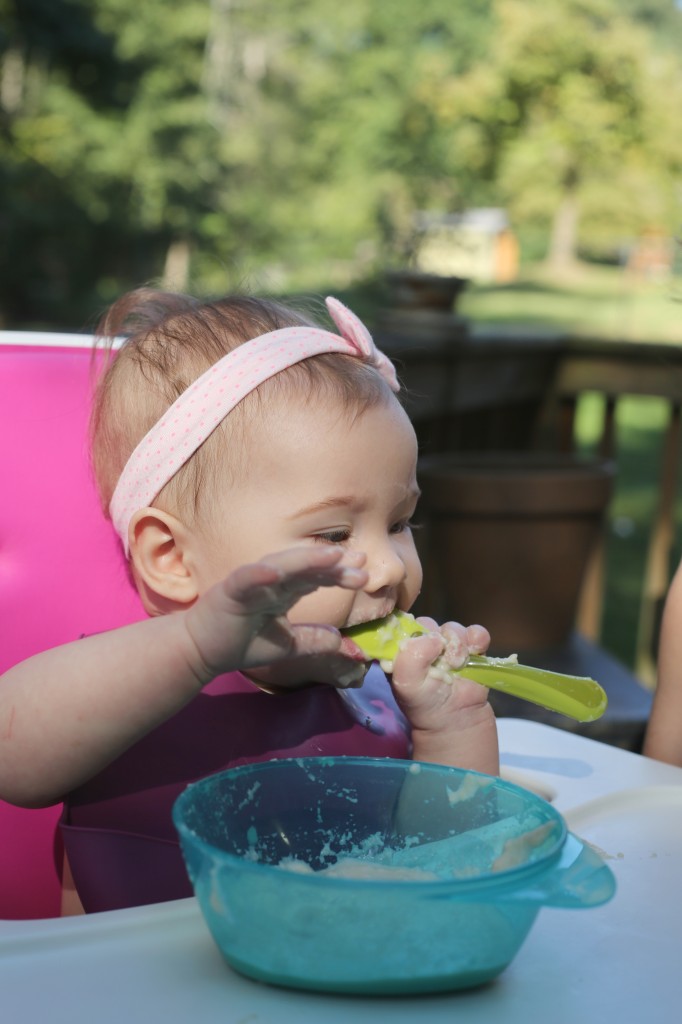 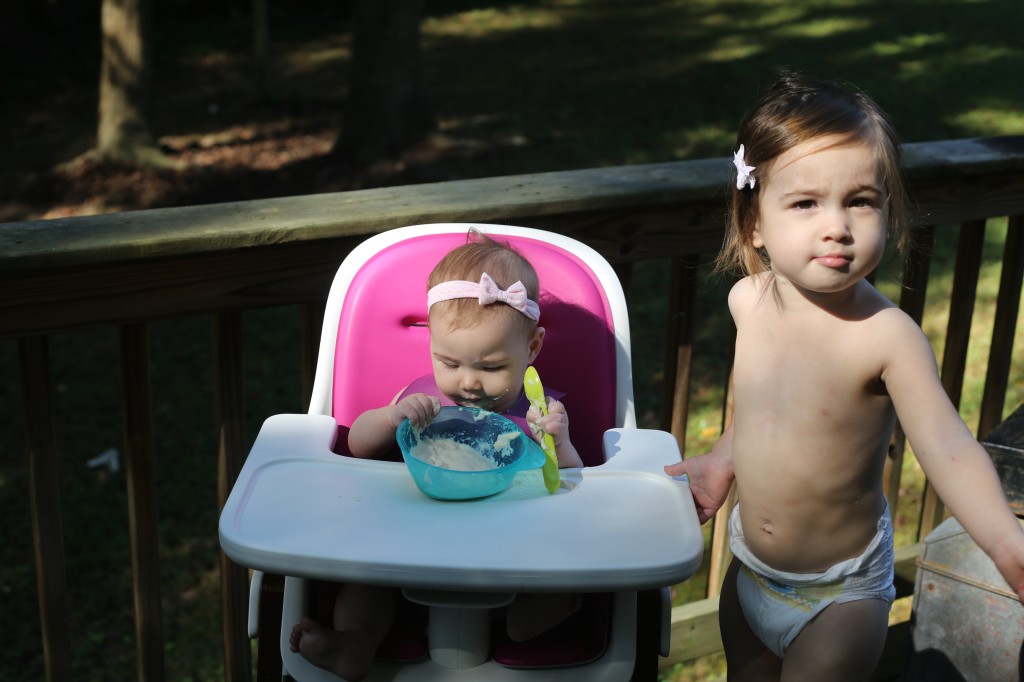 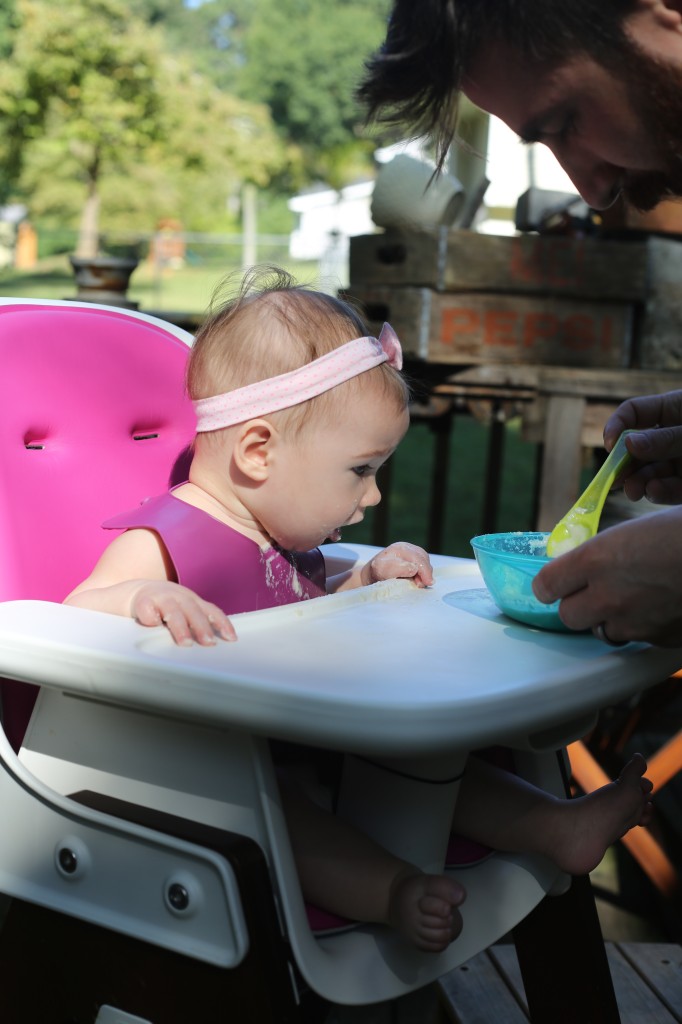 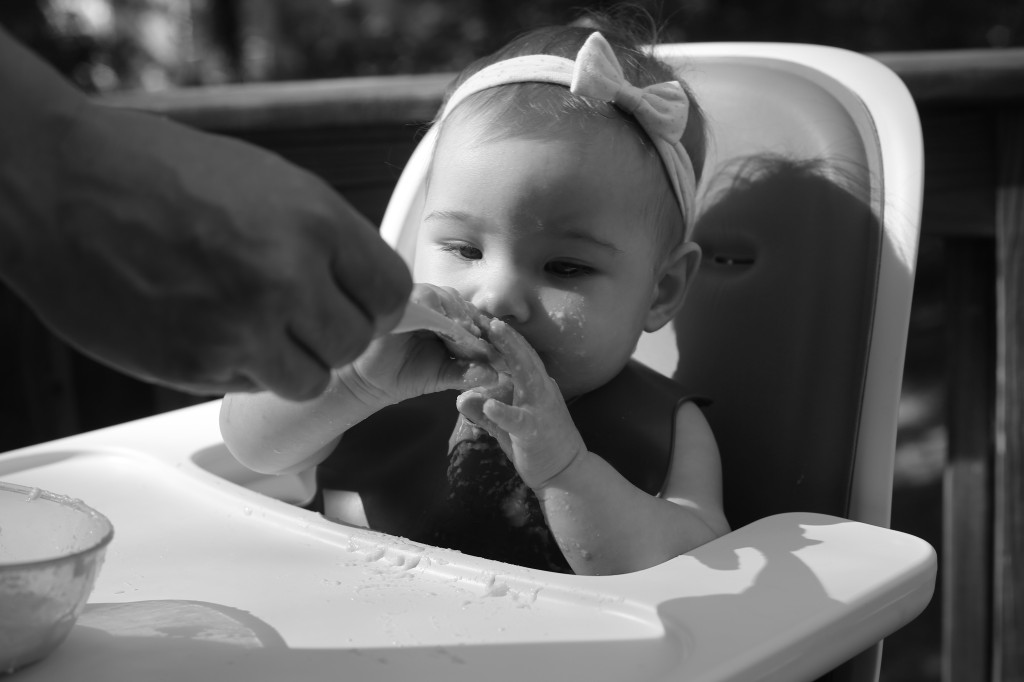 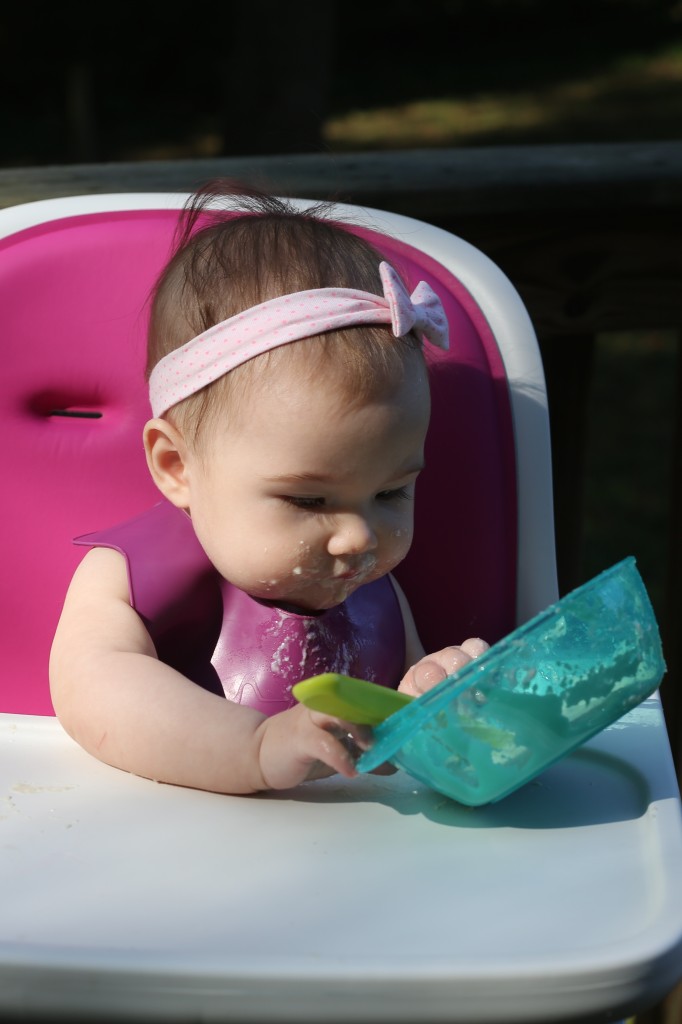 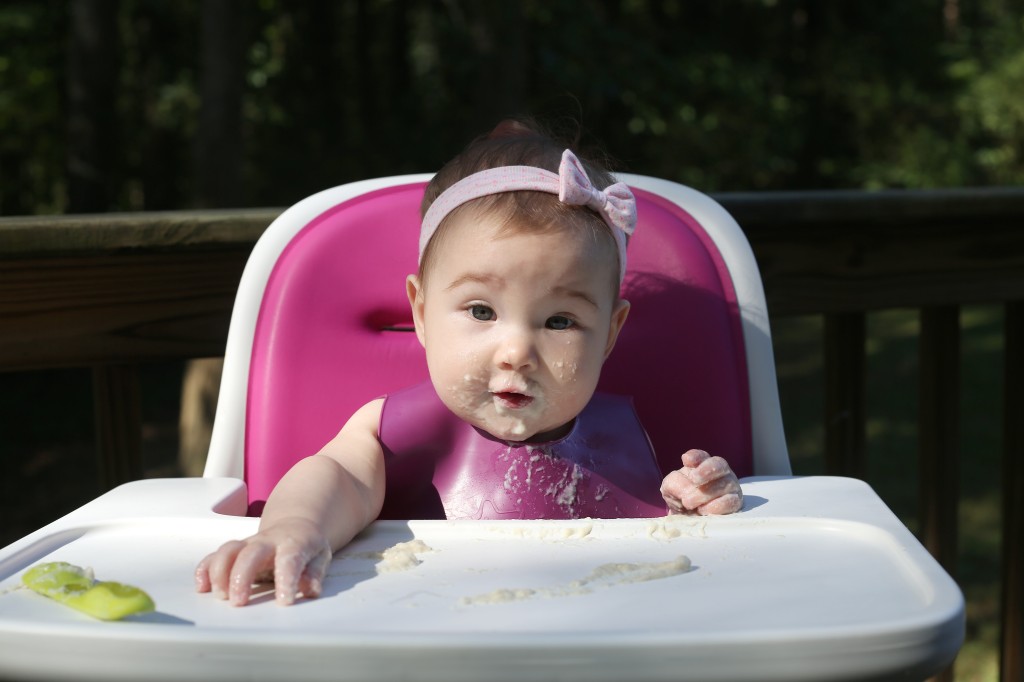 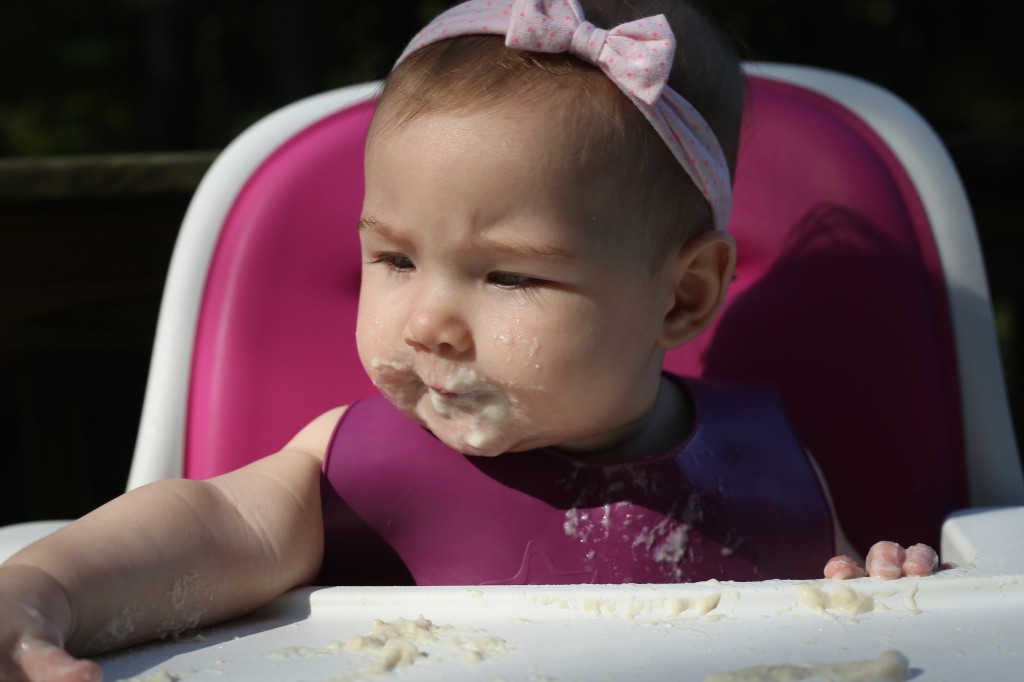 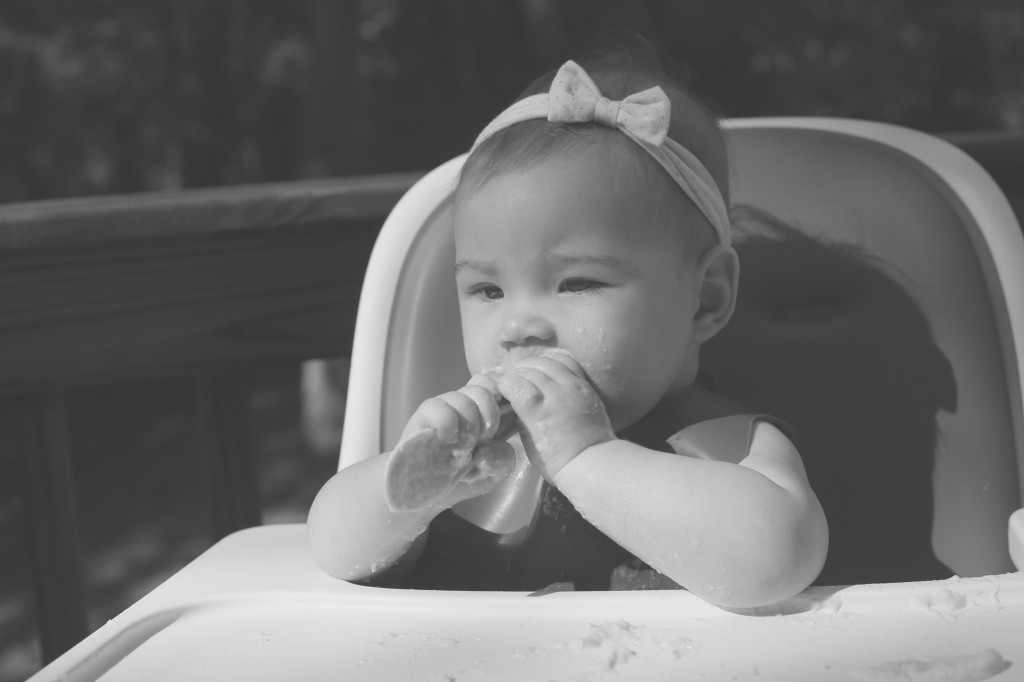 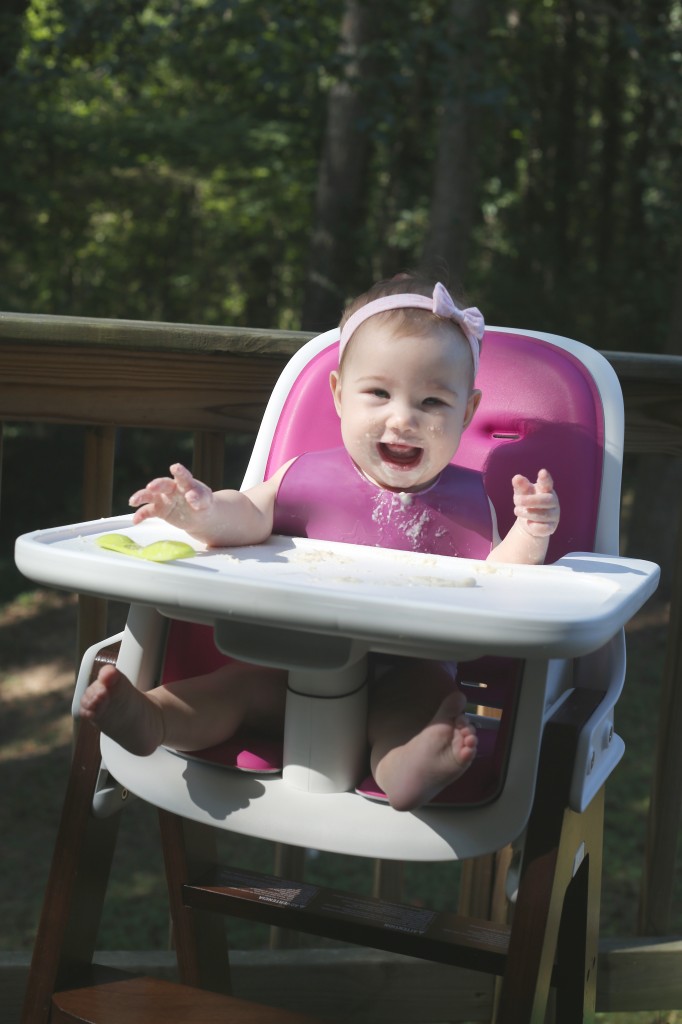