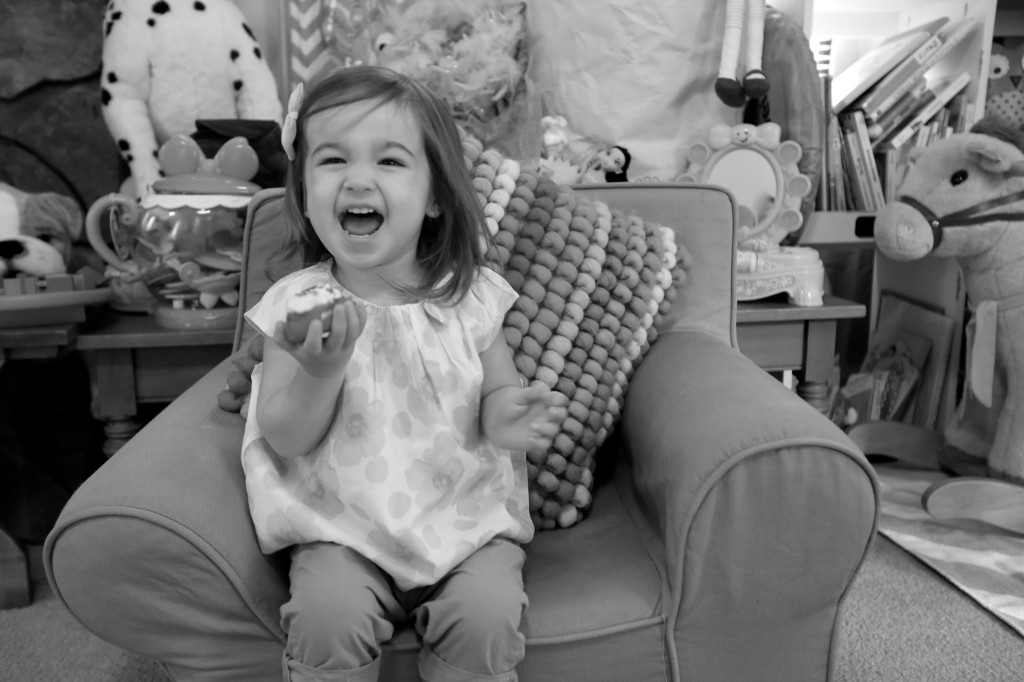 Tonight I was scrolling through Facebook and came across an article whose byline was “Arthritis, obesity, osteoporosis, diabetes, heart disease, high blood pressure, stroke, and Alzheimer’s can be directly related to diet.” And let me just say for the record — YES.

A little over four months ago I decided to do Whole30, which is a 30-day “cleanse” of sorts to reset your immune system. It’s strict — no processed foods, grains, dairy, added sugar or legumes. On Whole30, you can basically only have meats, veggies and fruits, to which most of my friends said, “WTH? That’s crazy. That’s too hard.” My response? Well, yeah, in a sense it’s “crazy” and “hard,” but the truly crazy thing is to think about what we’re really putting in our bodies when we eat Cheetos, and the truly hard thing is dealing with all the sickness and disease that we cause ourselves.

Truthfully, that first month was surprisingly easy because I was so busy with a newborn and toddler and traveling husband. I had no time to lament about how I wished I was eating donuts and chocolate chip cookies. And, by the end of the 30 days, I felt so great that I took one day off (to indulge in Mellow Mushroom pizza of course), and then I went back for Round Two. And then Round Three. I felt like I would never go back to my old way of eating again. However, the fourth month — August — was horrible.

Due to a series of unfortunate events, I got all messed up at the beginning of August. Because I was already messed up, I decided to take a few days off of Whole30, but then couldn’t seem to get back on the health train again. It seemed like every new start date I set was immediately derailed by a fun party or fancy dinner plans. And let’s not even mention the return of PSLs to Starbucks. (Clearly they’re a worldly representation of what Autumn is like in heaven.) As quickly as I had jumped into a Whole30 lifestyle, I jumped back into my old lifestyle — and, man, are those addictions quick to rear their ugly heads!

In “It Starts with Food” (the Whole30 manifesto), the authors describe in detail how things like processed foods are engineered to be addictive, and after three craving-free months, I must admit that I had totally forgotten what those cravings feel like. For me, Coke is the biggest demon. (My mother is a Diet Coke-holic, and so I grew up with soda being a regular part of my routine. Back then we thought, “Well, it’s diet and has no calories, so YAY!” More like “so BOO.”) In my post-college life, I’ve gone on and off “the stuff” several times, each time with the same result. I have terrible headaches, claim I’ll never drink it again, go a year or so Coke-free, decide to have “just one” (because who can eat Mexican without a soda?!?) and then be off the wagon again for a while until I feel guilty about it and decide to quit all over. Resume cycle. Let’s just say that August was definitely the start of that vicious cycle again! By the end of the month I was so far gone that I literally FELT LIKE CRUD every single day, regardless of how much sleep I got, how my day was going or whether or not I exercised. My food intake was overriding all areas of my life, and since the food (and soda) I was choosing was horrible, so was I! Here’s the craziest part of all of this — Ryan’s been Whole30-ing as well and also took August off…and also felt like crud all month. (Ryan’s a guy and not overweight, so for him to voluntarily go back on Whole30 simply to feel better should be proof enough that it works.)

So now it’s September and our Rumspringa of sorts is over. We’ve been out into the world of fast food and booze and soda, had our fill and are ready to return to the fold. This first week has SUCKED, to be honest. It was waaaaay harder to detox this time around, perhaps because my Coke consumption was at its all-time high by August 31st. I had a debilitating headache for almost three days (even after taking medicine!) that plagued me even in my SLEEP, and there were a million times that I just wanted to quit and run straight back to my first love, fountain-Coke-with-light-ice-please. During those three days, RumspringAugust was idealized and romanticized like crazy because I thought, “Surely how bad I felt then wasn’t worse than how I feel now!” And the thing is, that’s TRUE. But I was paying the price for my indulgences and had to re-learn the lesson of how bad that stuff truly is for you. And believe you me, LESSON LEARNED.

Ryan and I are a week in and feeling great. We’re not doing the super-strict Whole30 cleanse (been there, done that), but we’re doing the maintenance phase (meaning we aren’t uptight about every little thing that we put into our bodies — just our overall diets). I feel a MILLION times better now that I’m over my Coke Sweats (haha) and am thankful we’re back on board. Not to say that I’ll never have another soda again (it’s kinda’ like my version of having a glass of wine, which I can’t really do because I’m still nursing), but Ryan and I can’t return to the no-holds-barred food life we lived in August. The detoxing is So. Not. Worth. It.

Our next step? Getting E.V. on board. When we’re at home, her diet is pretty healthy, save for her bedtime snack which is usually Pirate’s Booty. ;) However, when we’re out and about, mac ‘n cheese is The Usual and most meals end with ice cream. Because she’s a kid and doesn’t understand the whole “cold turkey” method, we’re weaning her slowly. It’s going to take some time to get her to a 99% healthy diet. I say 99% because I’m realistic and know that having fun 1% of the time is fine. We just need that 1% to be saved for birthday parties and special occasions and not “because we need her to be quiet and french fries will occupy her during dinner out.” (True story, haha!)

P.S. Sillies, of course my five-month old didn’t really eat a donut. Geez. We were just playing! Give me more credit, will ya’? ;) 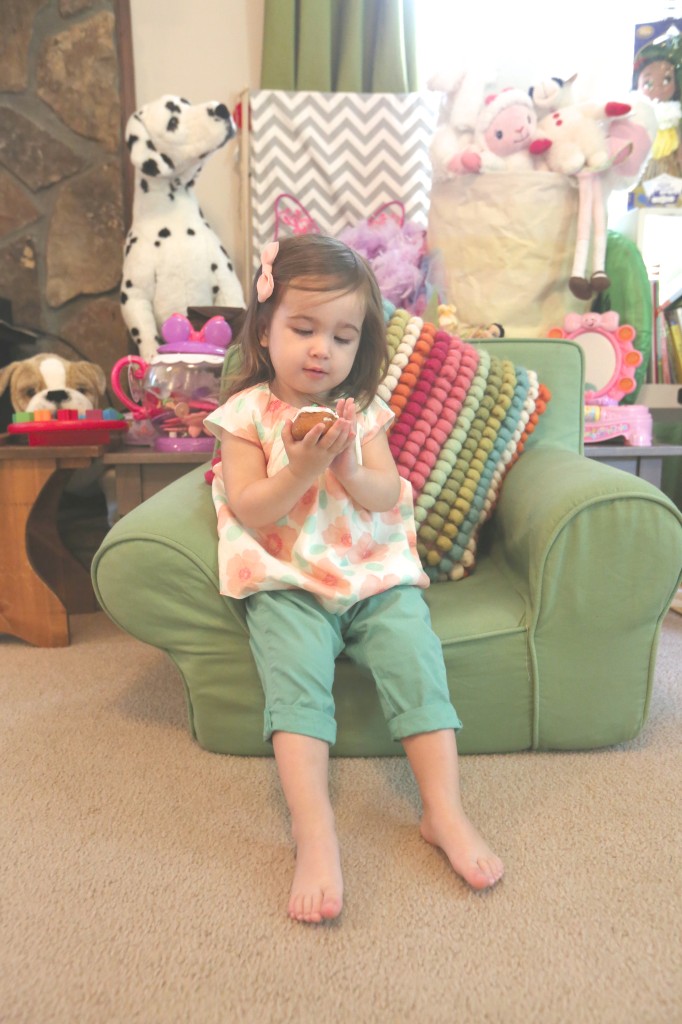 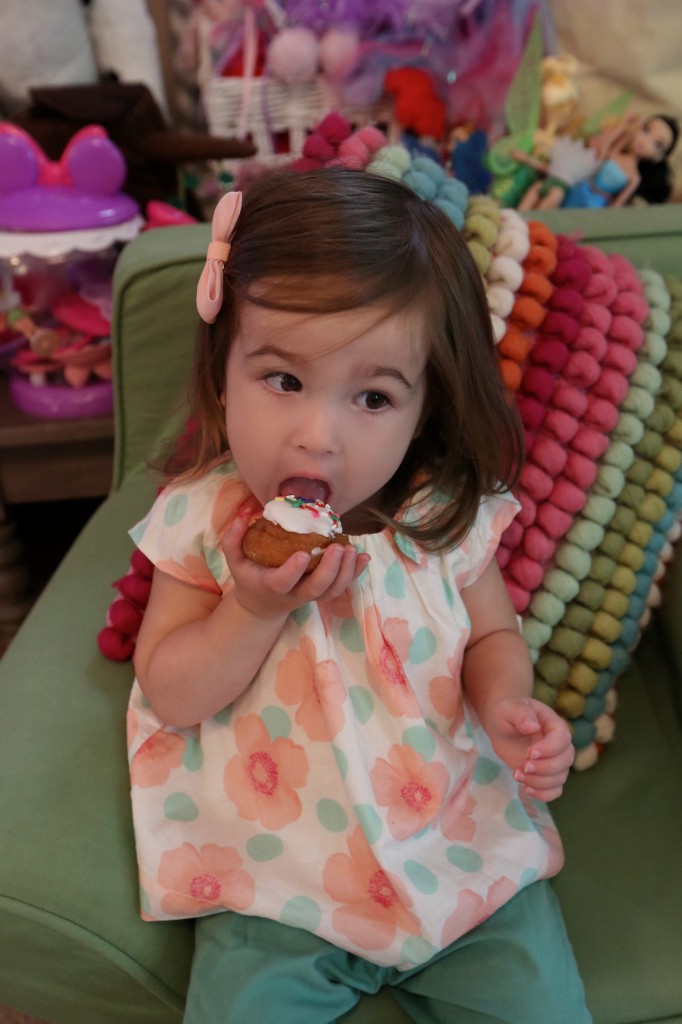 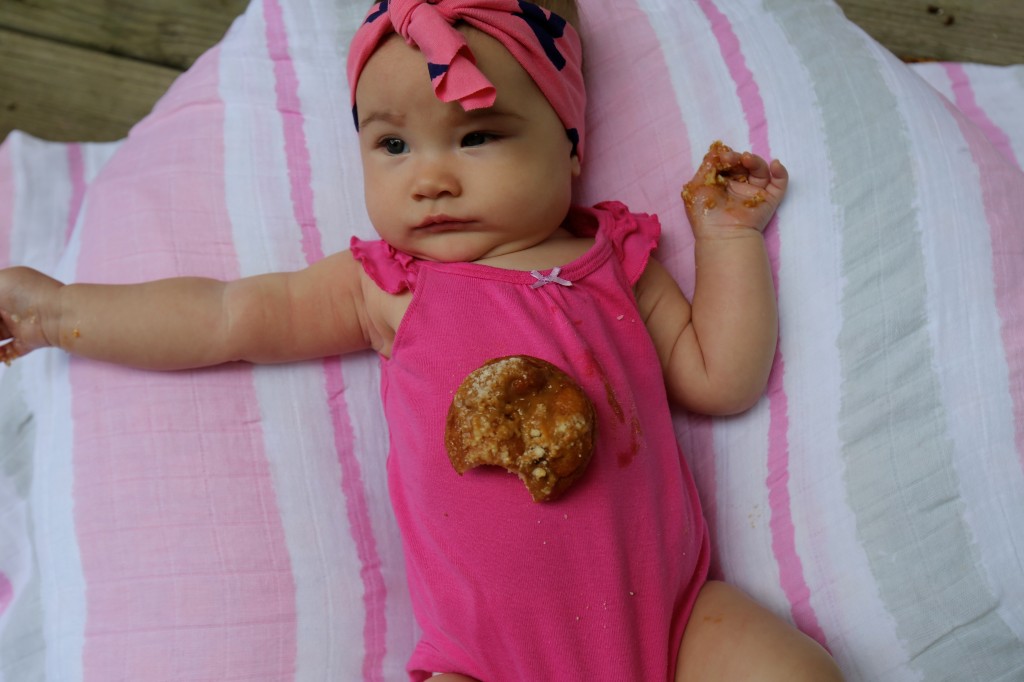 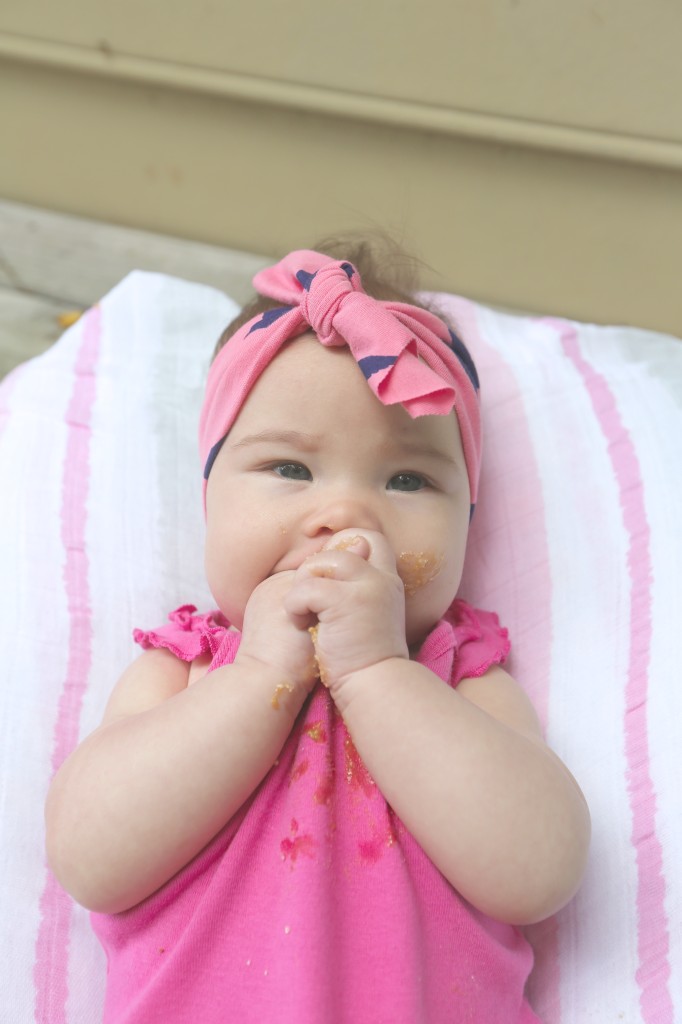