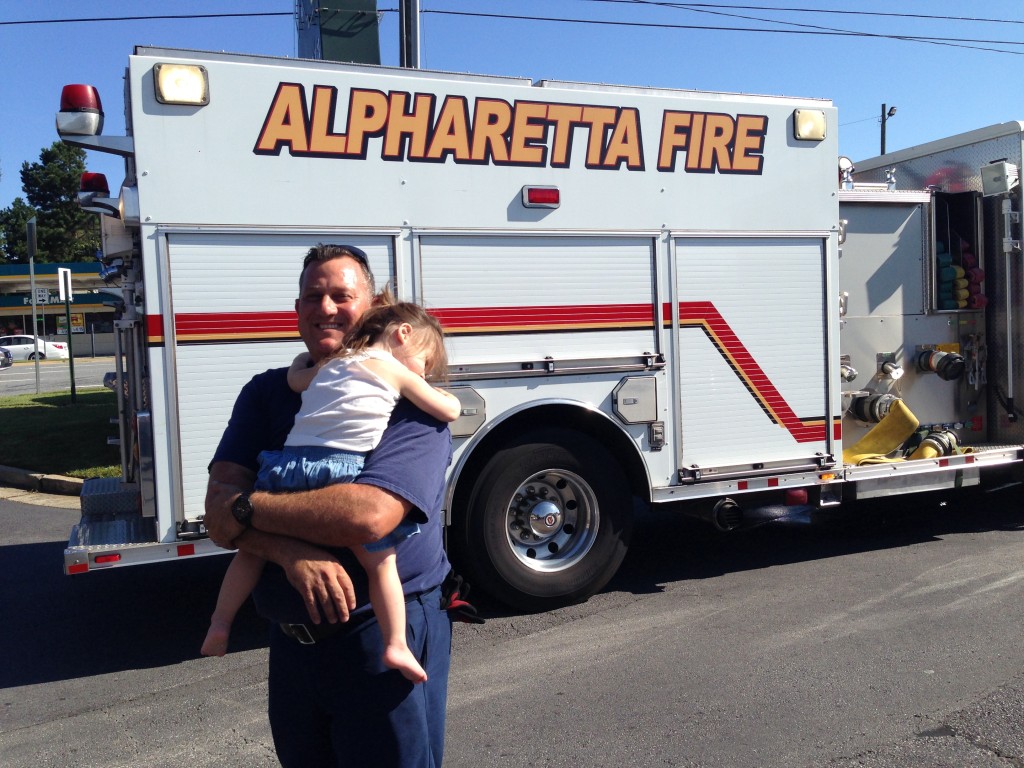 This morning was Emma Vance’s second day of gradual entry at preschool. Her time slot was from 10:45 until 11:45, meaning that there was plenty of time for breakfast at our local bagel shop. (When your littles are up at 7 a.m., you gotta’ fill that time with something.) It was as normal of a morning as it could be…at first.

When E.V. and I were done scarfing our bagels, it was time for Cricket to eat, and so we headed to the car for some privacy. I turned on the engine and air, sat E.V. in her carseat without buckling her in (since we were going to be parked for a while), grabbed Cricket and walked around to set myself up in the passenger seat to nurse. In the 10 seconds it took for me to round the car, E.V. scrambled into the front seat and hit the lock button. Life moved in slow motion for a minute as I heard the car locking. What the…? Surely, no. No. NO!

She locked herself in the car. LOCKED. HERSELF. IN.

{hand slap to my own forehead}

Thankfully there was a police officer walking past my car at the exact moment that this occurred, and he came to my rescue. Truthfully I wasn’t too panicked because the air was on and I figured, well, of course this happened to me. (I mean, this pretty much sums up my life right now.) In fact, poor Cricket and I had it much worse on the outside, sweating in the HOT southern sun. It got so bad that I even draped my nursing cover over sweet Kit’s head to block the sun’s rays, and the effect was such that she looked like some mini Mother Theresa (standing in stark contrast to my naughty toddler and the echoing of her dismissive, haughty laughter on the other side of that glass). Then the helpful officer and I tried everything — dancing around, shouting, trying to convince my two-year old to hit “unlock.” We even tried bribing her with stickers. But she was not to be bothered; she was content in her car, giggling and singing “Wheels on the Bus” and climbing and pretending to drive. She even hid for a few minutes on the floorboards, and in that moment I knew what was going on. She was pooping. POOPING. Whenever E.V. has to go #2, she needs privacy. If she’s hiding behind a curtain, in a closet or in a corner, you can bet she’s pooping. Apparently this morning she wanted that privacy, too, and figured that a car to herself would have to suffice. Ugh.

I tried calling Ryan to see if he could locate our spare key, but since my house is currently a disaster, it was in vain. After this failed attempt, the officer gave me the “oh well” look, picked up his walkie-talkie and called it in. I could hear bits and pieces of the conversation from a few feet away, most notably that he reported, “No, the air conditioning is on so there’s no distress…Well, the kid’s not distressed. The mom, well…” Yeah, thanks. Then he assured me that the Fire Department was on its way. As I melted in the unbearable summer heat, I wished I could really just melt away from embarrassment, but I’m not that lucky.

When a few minutes later a Fire Department car pulled up, I breathed a sigh of relief and commented to the officer, “At least I didn’t have to get a full-on truck!”

{insert awkward pause} “Um, the truck’s on its way.”

Once the fire truck arrived and my circus scene was complete, it only took a few minutes to get the car unlocked with a bladder (that is to say, a whoopy cushion saved my daughter’s life). E.V. jumped out and into the fireman’s arms quite happily, resting her head on his shoulder for a quick photo op. (She looks sad in these pics, but she really just likes snuggling strangers. #truestory) We missed Alpharetta’s “Touch a Truck” event a few weeks ago, so I suppose that this morning made up for our absence, right? :) When all was said and done and the shop owners and patrons went back to their daily business, there was nothing to do but continue with our day, so I changed her diaper and headed to preschool. On our way, E.V. and I had to have a heart-to-heart. “Dear, it’s okay to need privacy when you have to go poopy, but next time, please let’s just use the bagel shop’s bathroom, okay?”

P.S. A HUGE thank you to the Alpharetta Police and Fire Departments for their patience and aid this morning! :) 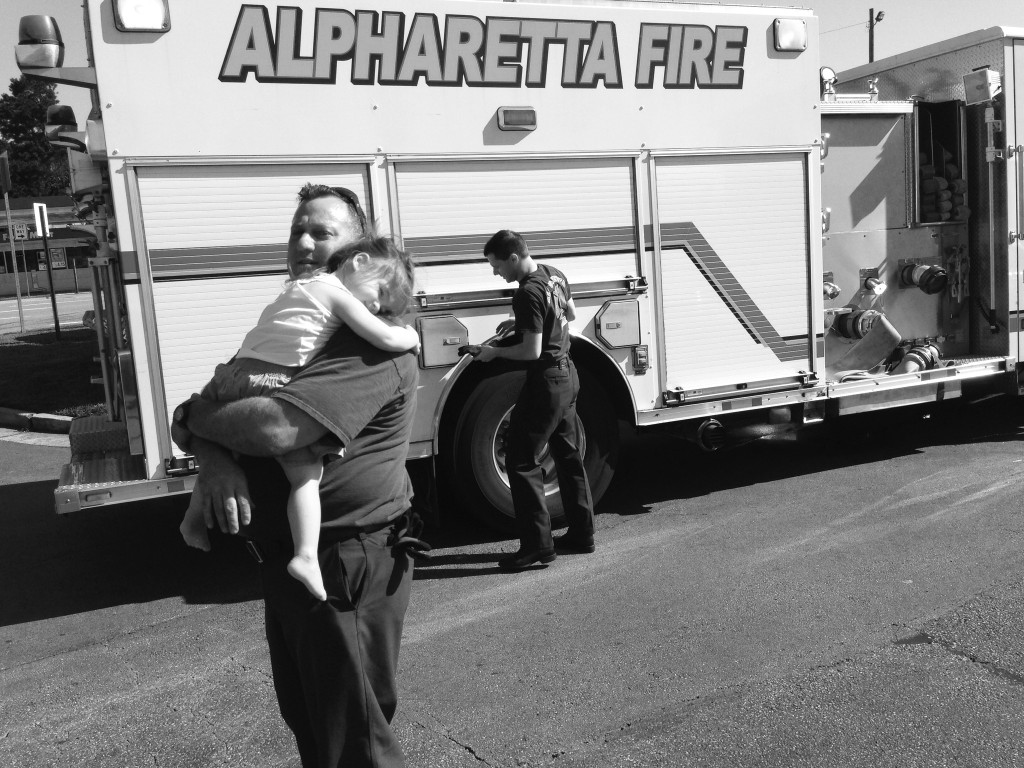