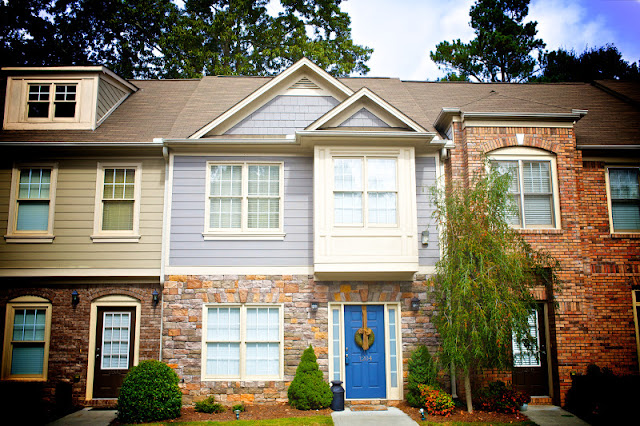 Our townhouse is under contract! Ohmygosh.

Whoa. I’m running the full gamut of emotions, folks. It’s been an odd couple of weeks around here. We’ve all of a sudden had a ton of showings over the last month, one of which resulted in an offer.

We’ve had two offers on our townhouse before, both of which didn’t work out, so this time around we didn’t want to breathe a word of what was going on until it was finalized. I swear that in all the time our house has been on the market I’ve never had so many people ask me if it had sold yet. Sorry to lie awkwardly to everyone, but now that the cat’s out of the bag, you can mark your calendars that on 10/11/12 it finally happened! We’ve been through home inspection, termite inspection, appraisal, due diligence, and now we’re ready to declare that IT’S OFFICIAL. Turn over the hourglass because the countdown has begun!

Ryan and I bought this townhouse (at the height of the market and of interest rates) right after college. We really had no clue what we were doing. In fact, I distinctly remember saying to Ryan, “Oh, we’ll live here a year or two and then just sell the place. I mean, you don’t want to be 30 and still living here, do you?” (Ha.) We closed on October 31, 2005 and got married two weeks later. It was a crazy time of life–and has continued to be ever since.

When we purchased this home, it was brand spankin’ new, smelling all freshly-painted with not a lick of personalization in sight. We’ve pushed this townhouse to its limits with painting, hanging, installing wood floors and new carpet, endlessly redecorating rooms, cramming closets with junk, fencing in the yard…and the list goes on. The day we moved in, I remember thinking that I would never have enough stuff to fill this place. Oh, my. I take it back! I take it back! Somehow seven years’ worth of living, growing and shopping has left us busting at the seams, and our tiny 2/2.5 just isn’t cutting it anymore.

This feeling of needing more space began two years after we got married. We decided we wanted to move into a real house since we had adopted Oscar and Olive, so we put the place up for sale and got an immediate offer. We would’ve lost $1,000. We rejected it. Oh, how the times (and market) have changed! Fast forward through five years of being on-and-off for sale, of last-minute showings, of terminated contracts, of falling in love and losing other houses along the way, and you can see why we didn’t want to get too ahead of ourselves when this latest offer was presented. In fact, God’s so funny in my life: I tend to like things to be very even and logical, and so He often responds to this desire by making the timing of my life events very methodical. October has always been a big house month for us (it’s when we bought the house, when we got and lost the last contract, and now when we sold the house), so I shouldn’t have been surprised that this is happening now.

We’ve been negotiating and getting our ducks in a row for exactly two weeks, and as I put the final signature on the contract yesterday, I immediately panicked. I mean, we’ve wanted to move on so badly, but now that it’s really happening I have such mixed emotions. This is our home. I lived in my parents’ current house for 10 years until I graduated high school; then I lived in the dorm for a year; then I lived in the AXO house for three years. I’ve been here for seven years. SEVEN YEARS. I really can’t even wrap my head around not living here. We’ve been so focused on not getting our hopes up that now that it’s a reality, I’m really struggling to feel excited. More so I feel numb and sadly reminiscent. Logically, though, I know the excitement is coming. I can feel it creeping up slowly. You’re welcome, whoever is with me when the excitement hits. It should be quite a fun thing to watch. There’s just so much to accomplish during this next month. We’re throwing a wedding reception and a baby shower; Ryan’s continuing to travel for work; I’ve got three routine, long-ago-scheduled doctor’s appointments coming up; I’m trying to train for a half marathon; not to mention that we’ve got to work and take care of E.V. while packing up and figuring out where to move. It’s going to be a LOT to handle. I apologize in advance if I’m cranky or non-communicative over the next few weeks. It’s go time, people!

And, of course, we still can’t rule out that something could still happen in the next month to make this deal fall through. Ugh–the stress of it all!

I walked around this evening trying to imagine packing up all of our stuff. It’s going to be really, really hard to leave. I know that we’ve been praying and desiring to sell our house for so long, but I still feel protective over this place, like it will always be mine. It’s going to be weird to hand over the keys and never return. Ever. Shouldn’t I be happy to be done with it? Oh, well. I suppose after seven years of living here emotional attachment is to be expected.

When I called to tell my mom, I asked her if there was such a thing as a “house cooling” present? Maybe some packing boxes and tape? :)