Tonight, as Ryan was driving home from the airport after three days away, Emma Vance was going to bed. He and I talked on the phone just after I set her down in her crib, and Ryan expressed that he was sad to miss seeing her by just a few minutes. I can understand his emotions; I’ve barely gone a full day without seeing her sweet face, and so after three days away, it would’ve been so nice for him to be able to hold her before bedtime. Unfortunately that’s not how things panned out, and as I got off the phone with Ryan, I realized that E.V. had been unusually quiet. Typically she cries for at least a few minutes before dozing off, so I had a moment of panic…until I checked the monitor.

There she was, diving in to her pile of toys at the end of her crib, playing quietly before bedtime. She usually just chews on whatever stuffed animal I hand her when I set her down, but tonight for the first time she attacked those toys, pulling every last one out to throw around. This went on for about 30 minutes, and then, as silently as she’d been all along, she fell asleep mid-play. Literally. It was the most pleasant bedtime process we’ve had thus far, and it warmed my heart to see her playing so nicely by herself. When Ryan made it home, we both went in to check on her, and although he didn’t get to hold her, I think this sight was enough to fill his heart until the morning.

When I look at these two pictures, I see Ryan Shove’s child; this is exactly what I imagine him like as a kid–explorative and curious, eager not to miss even one minute of potential fun, happy to be alive, exhausted from bringing so much joy into the world. I am one lucky lady. 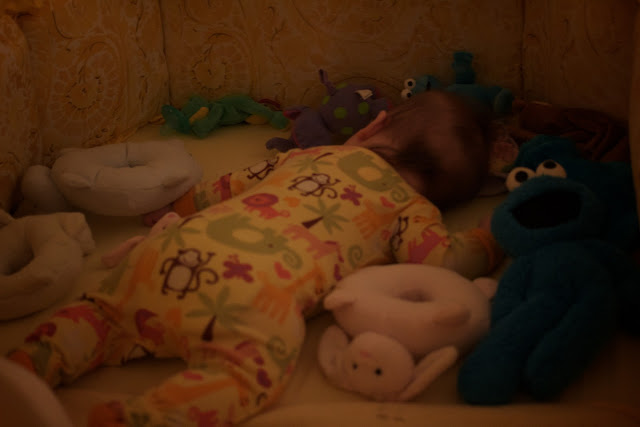