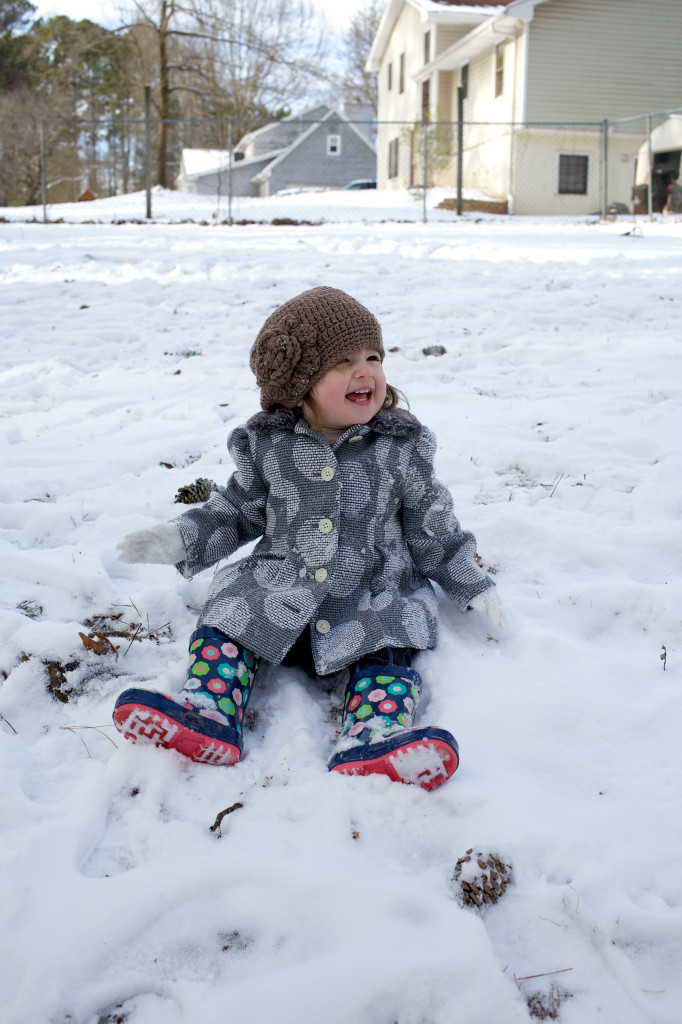 Last night was crazy. Watching our friends’ lives unravel via social media was hard; throughout the night Ryan and I followed along as husbands abandoned their cars on the highways and walked miles home in the freezing cold dark of night, mothers panicked with empty gas tanks and children in their cars, and loved ones desperately sought information from the online community when unable to reach their en route families due to dying cell phones. Ryan and I counted our blessings as God intervened quite fortuitously for us: Ryan was literally getting into his car to head into the city at 12:30 yesterday to run a quick-but-necessary errand when he made the last-minute (and ultimately very wise) decision to skip the outing completely, which is extremely unlike him. If he had chosen to make the trip, he would’ve certainly been stuck in the thick of the terrible traffic and eventually forced to take shelter somewhere between home and the city. Thank you, Lord!

Feeling helpless while watching the drama unfold online, we were eager to help in any way that we could. Thousands of people opened their homes, passed out food and water and helped push cars up hills in Atlanta last night; it was inspiring to say the least. Here at the Shove household, we attempted to take in a friend who was en route to home, but they decided to make the treacherous trek. Then we sat by our windows, urging the cars along the main road by Amityville to make it up the hill, ready to help anyone who got stuck, but everyone (thankfully) made it on their own. Finally, with no opportunities to be of aid coming our way, we resolved to ensure that our animal friends were well taken care of; Ryan noticed some fresh cat tracks in the snow late at night, so we searched outside, under our cars, trying to make sure that there wasn’t a stray looking for shelter. Our attempt was to no avail, but this morning my choice in a wonderful, loving husband was confirmed when he admitted that he re-checked under our cars at 4 a.m. “just in case.” I love that guy so much! He shares my same heart, and that is a unique and comforting thing for a wife.

Overall, I’m thankful to say that we’ve had a very easy time with this snowpocalypse. Although I learned this morning that my older brother ended up with his car in a ditch and a long walk home, he’s safe, along with all of our friends and family we spent the night worrying about. We’ve just been hunkered down at Amityville with our heat, our internet and ourselves for entertainment. Really, we couldn’t ask for more. E.V.’s been anxious to play outside all day, so I started off with an attempt to re-create “snow” indoors with some soon-to-be-discarded tissue paper flowers. The attempt was a total fail and ended with her begging to touch the snow at the back door. Since it was close to nap time, it wasn’t realistic to bundle up and play outside at that moment, so instead we opted to have a bowl of “snow ice cream” for lunch, which thrilled my toddler. Win for this mom! Once she awoke, though, we did go outside to play with The Russians, and E.V. even rode the sled all by herself! We might get one last day of snow fun tomorrow, but I can’t break the news to my little lady quite yet. :( She’s going to be suuuuper disappointed when it’s gone, so we’re going to soak up as much fun in the white fluff as possible while it lasts! 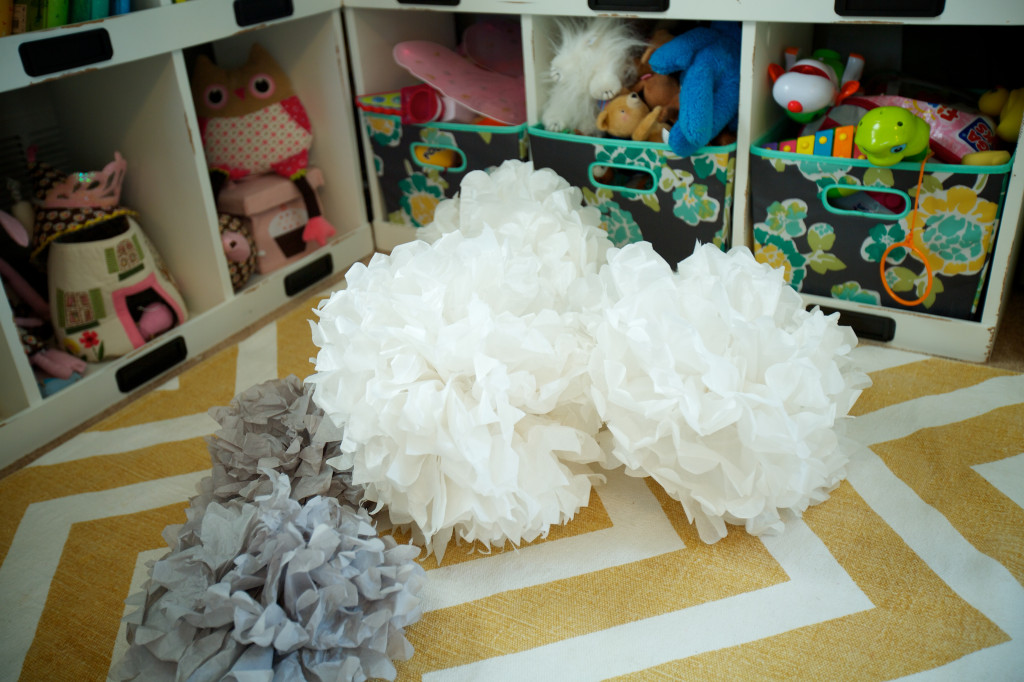 (Those pom poms could’ve passed as indoor snow to a toddler, right? NOT.) 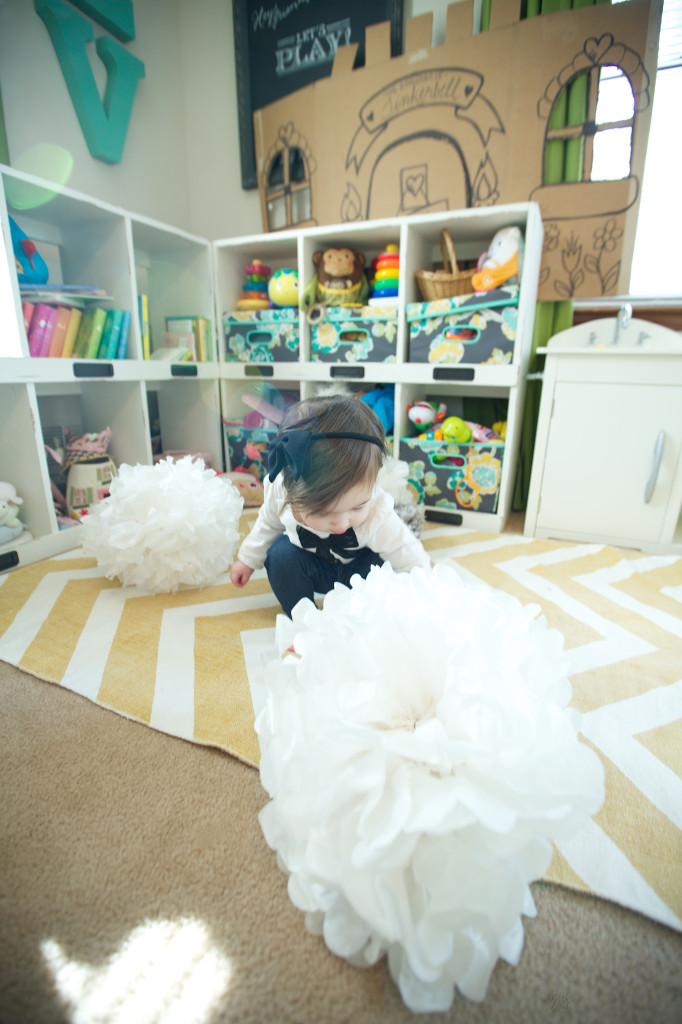 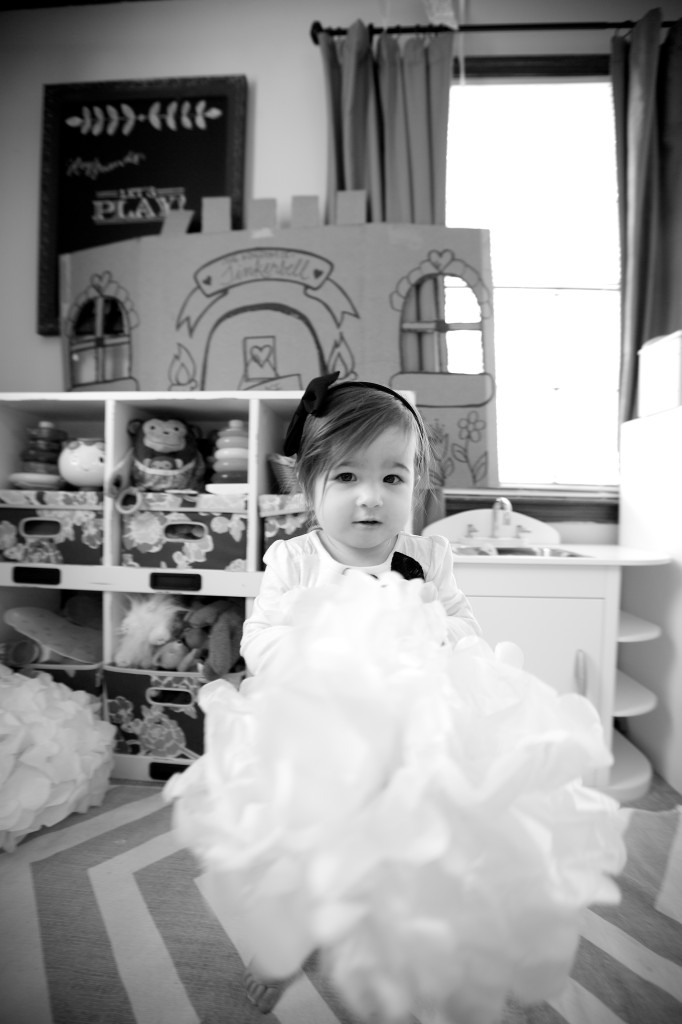 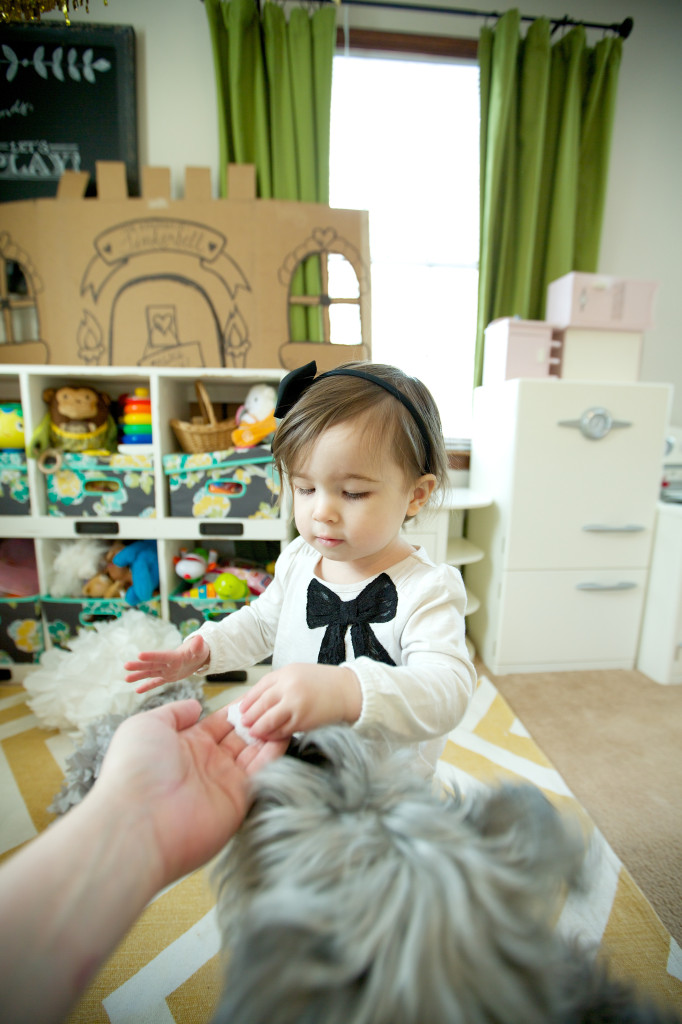 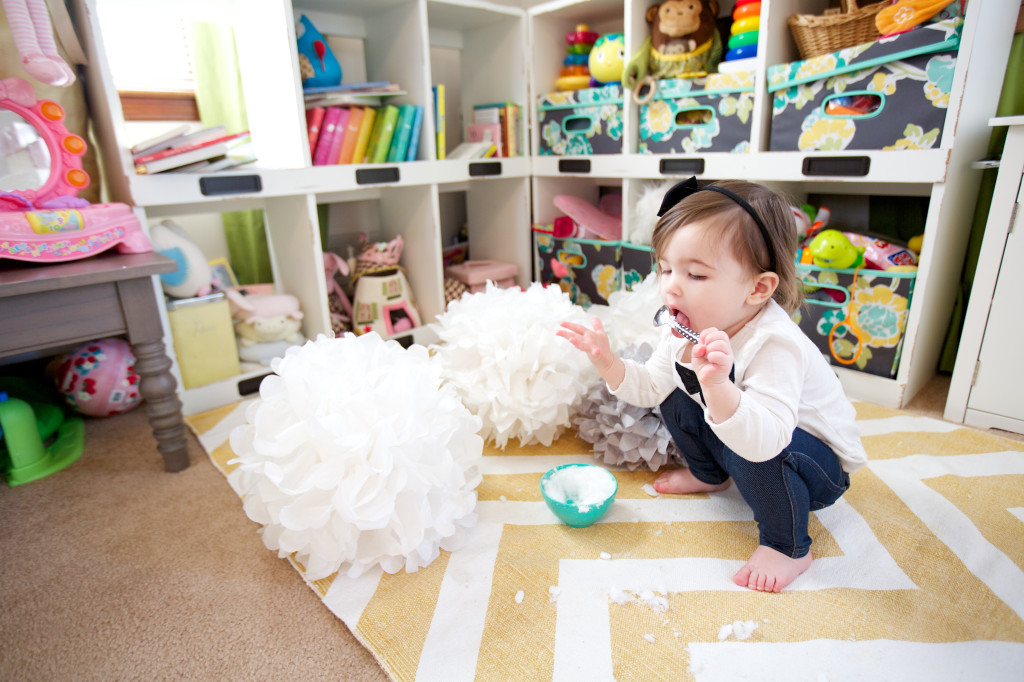 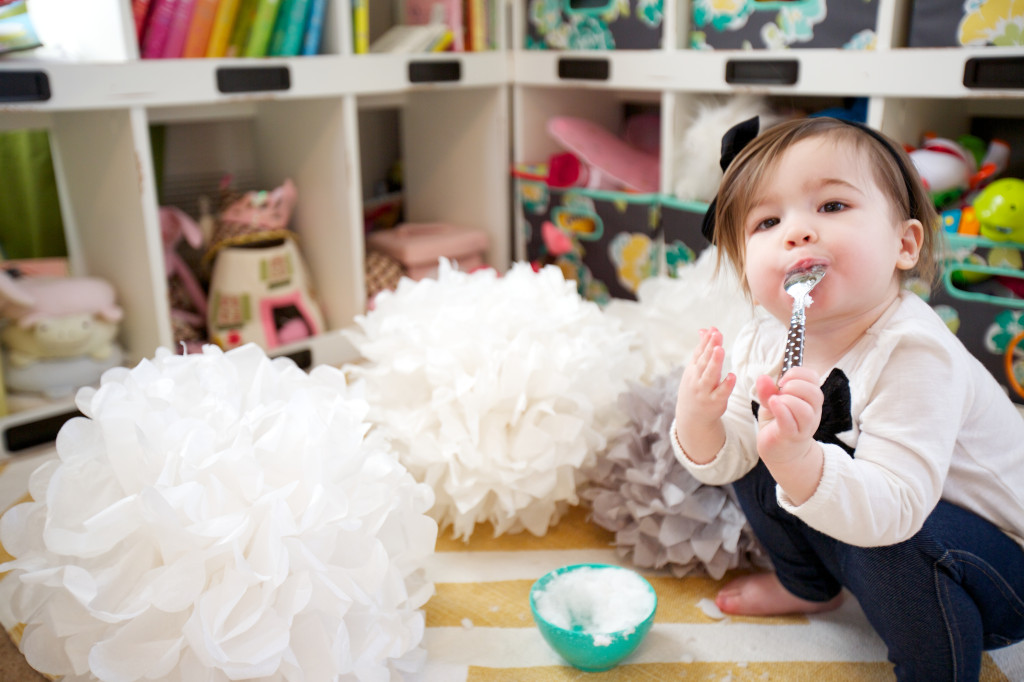 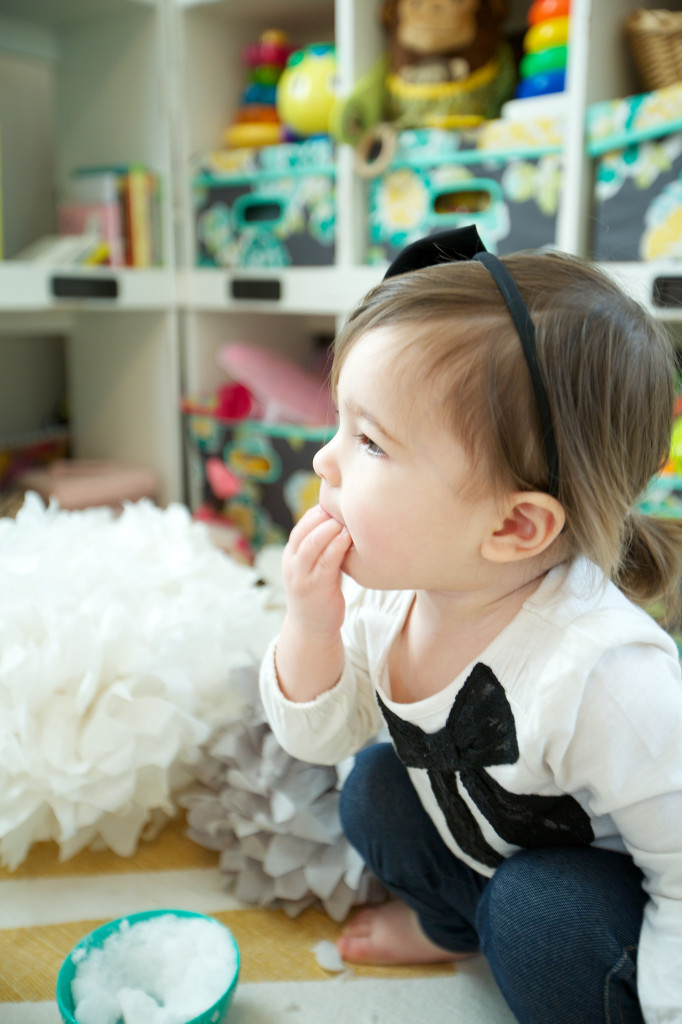 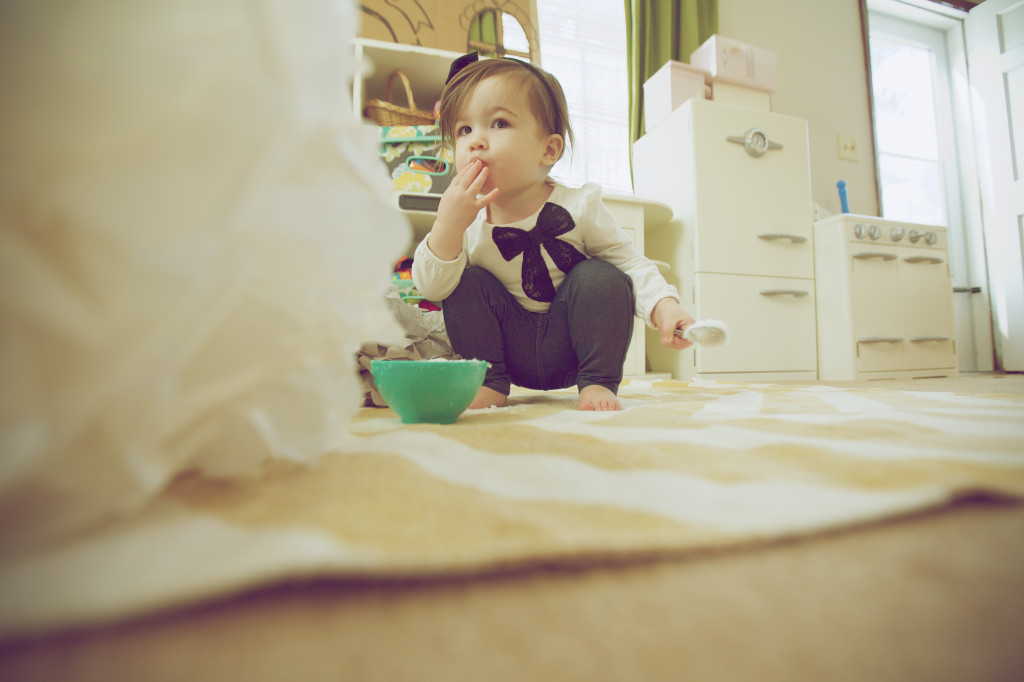 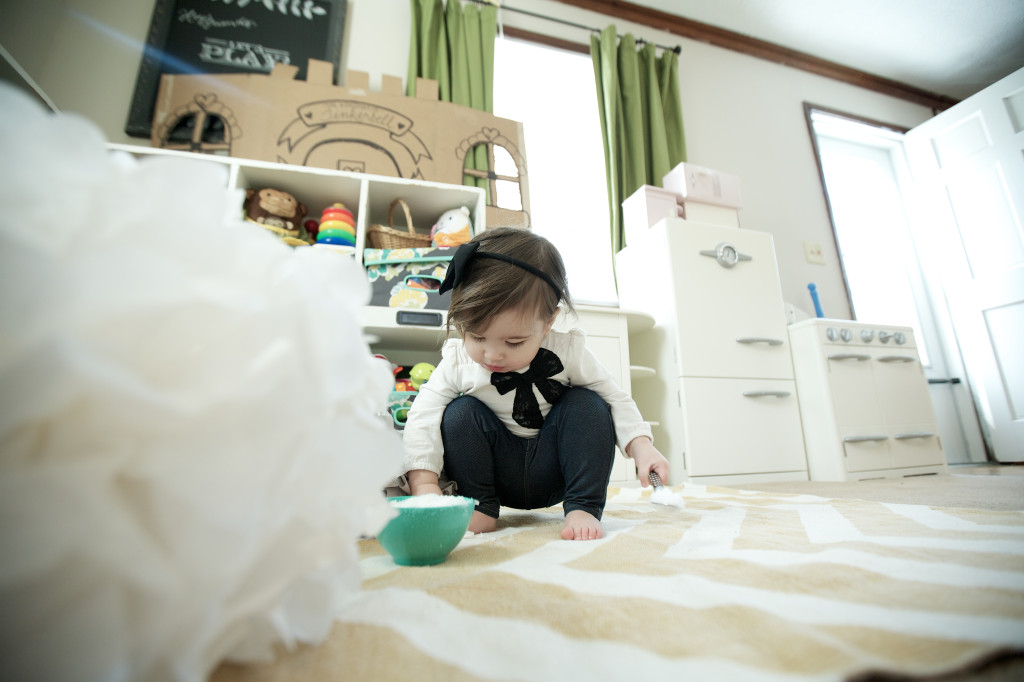 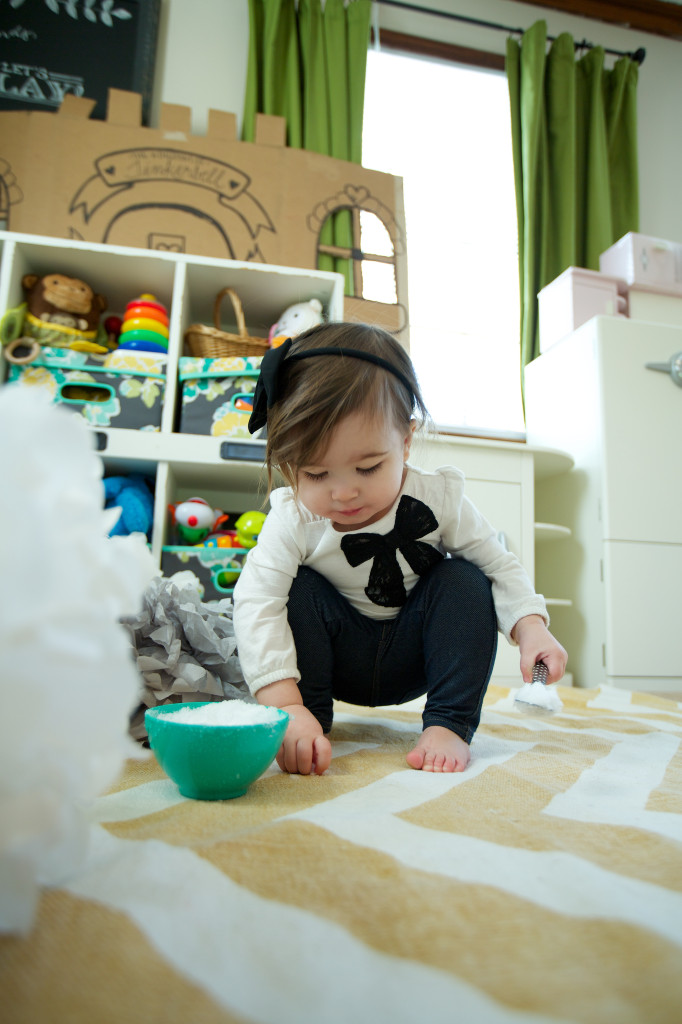 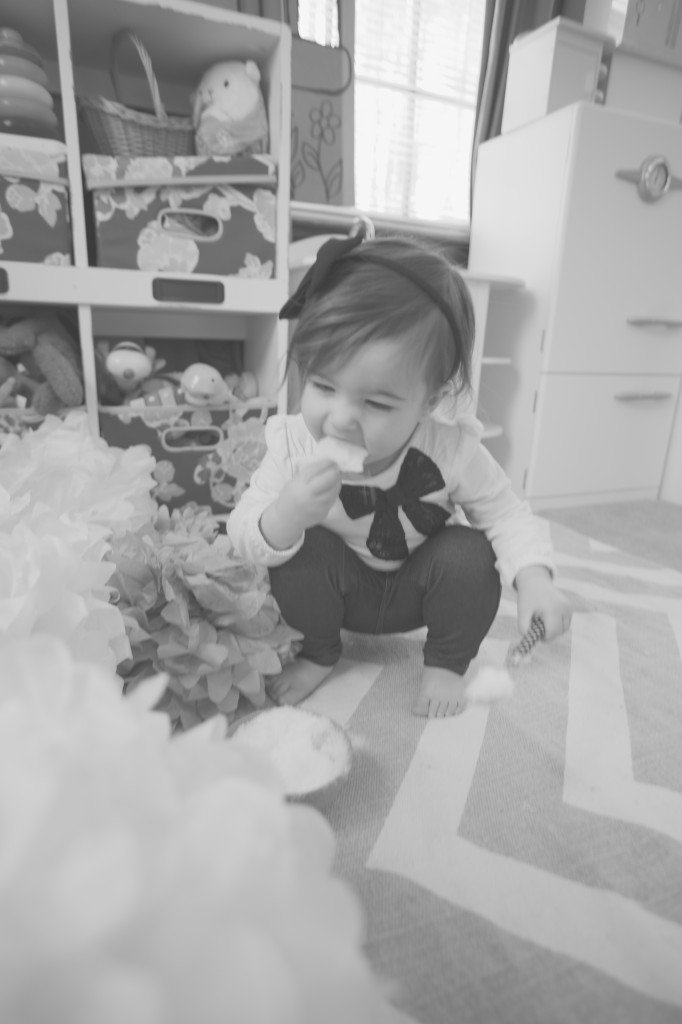 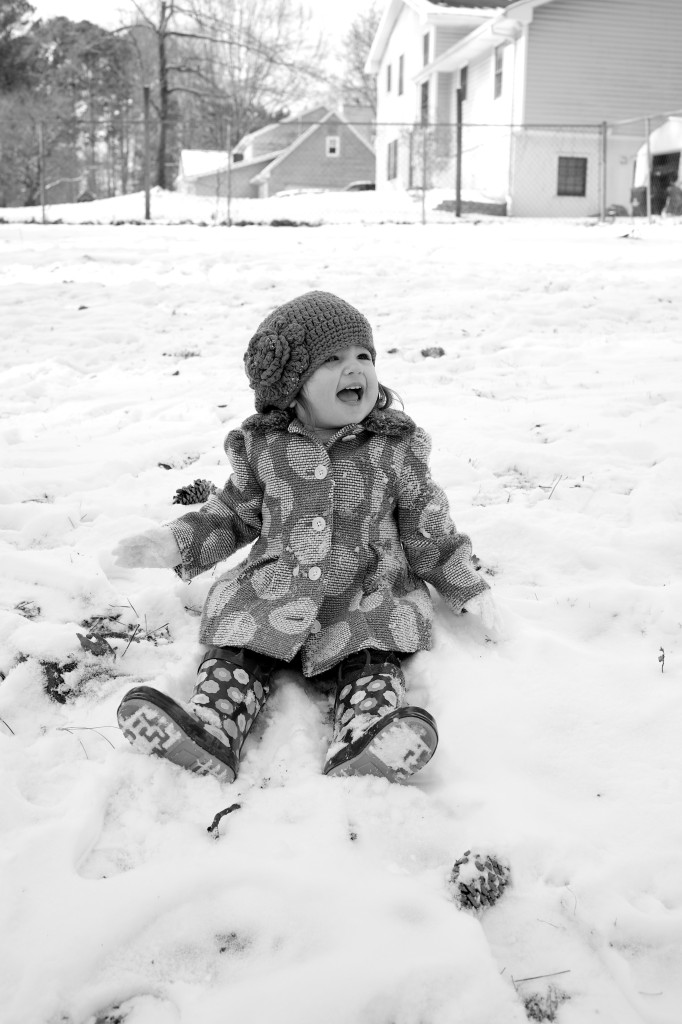 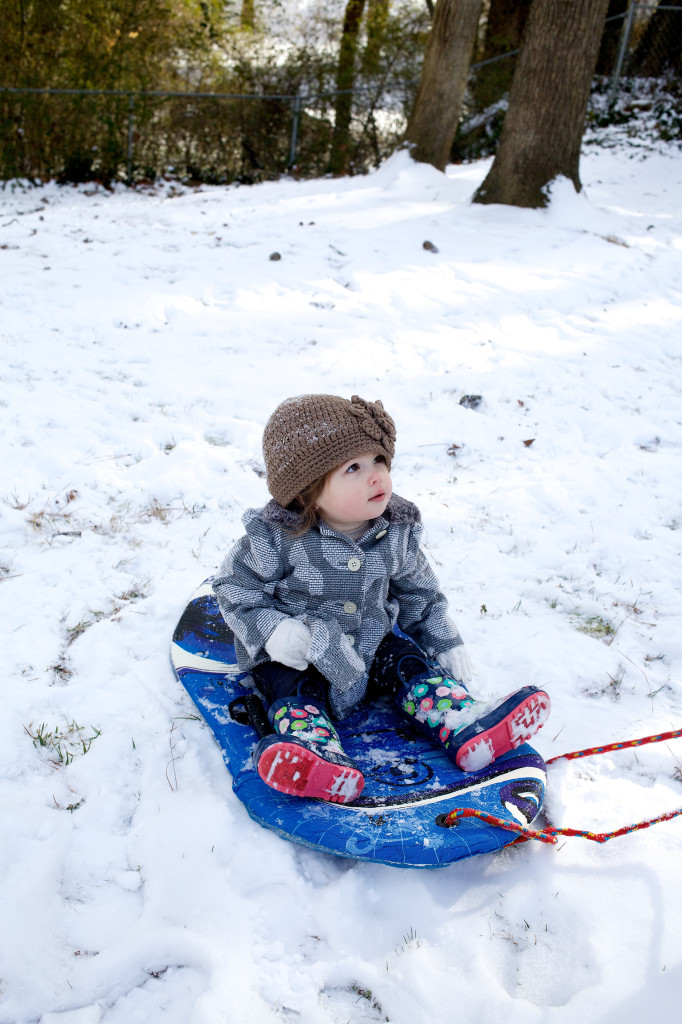 Big girl got to sled all by herself! 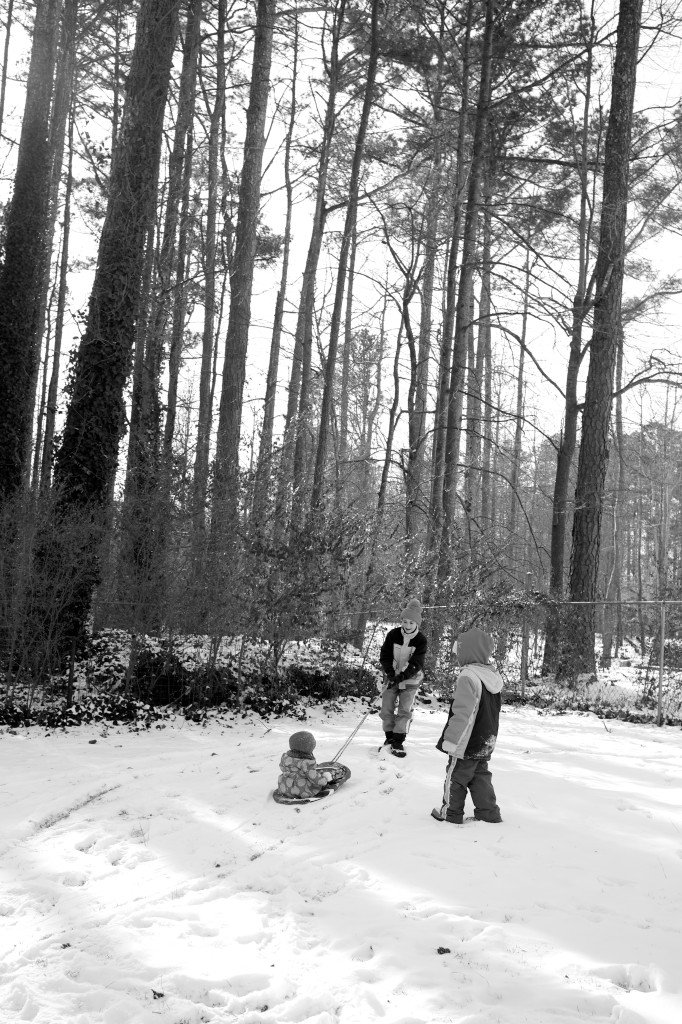 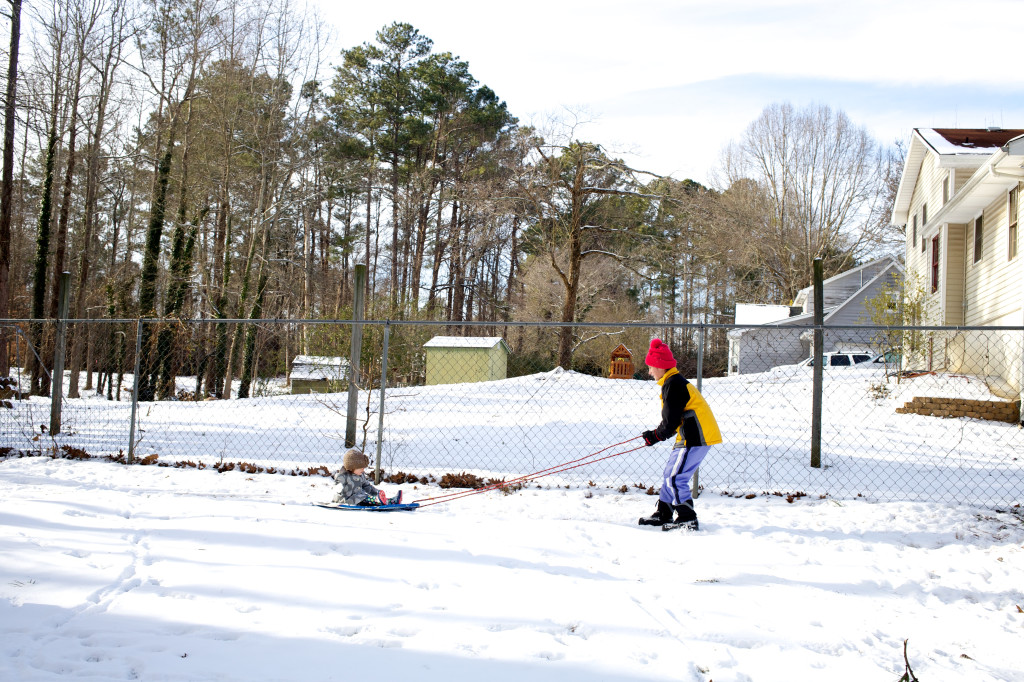 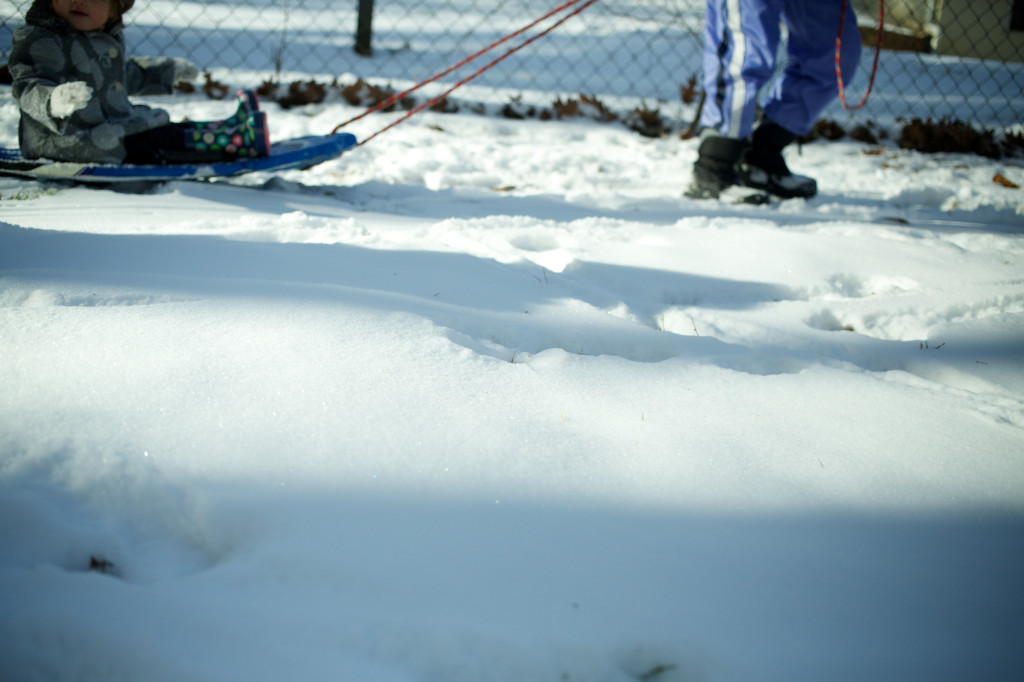 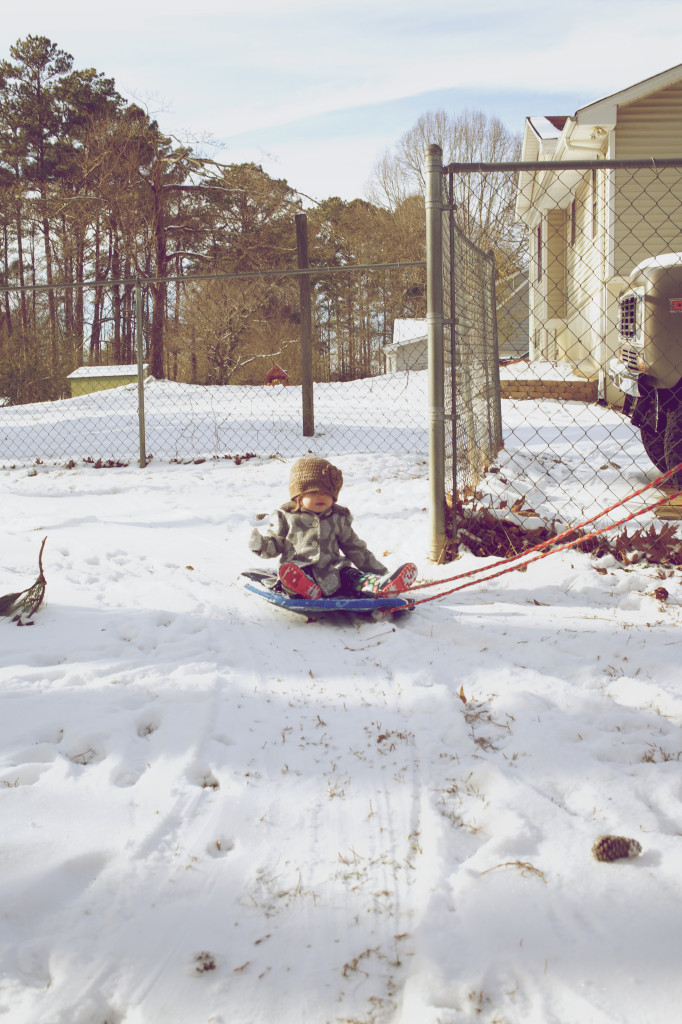 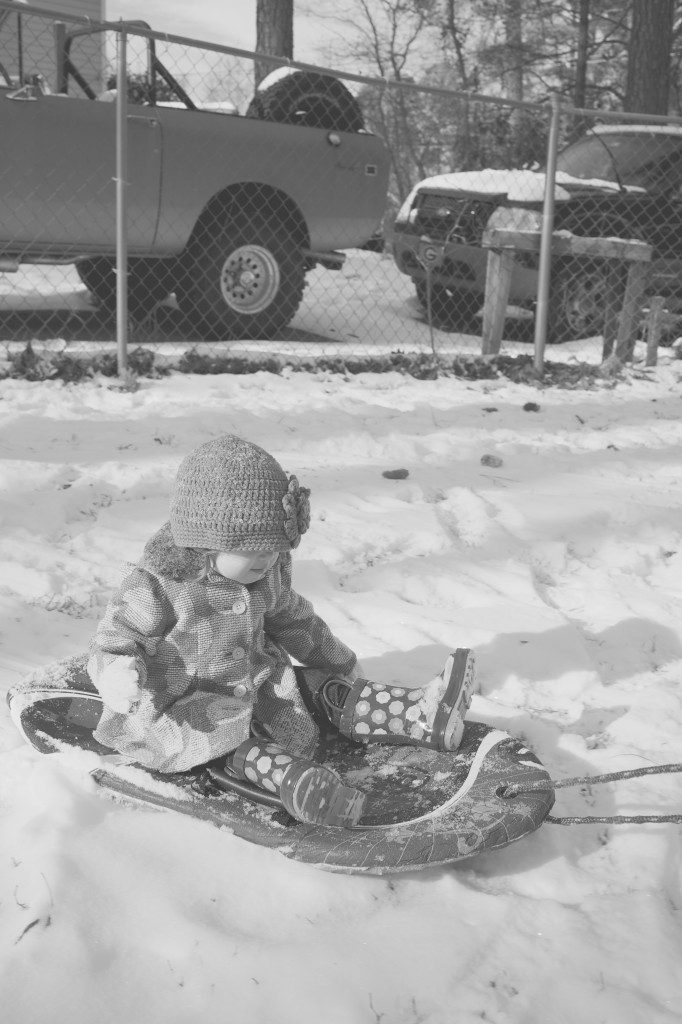 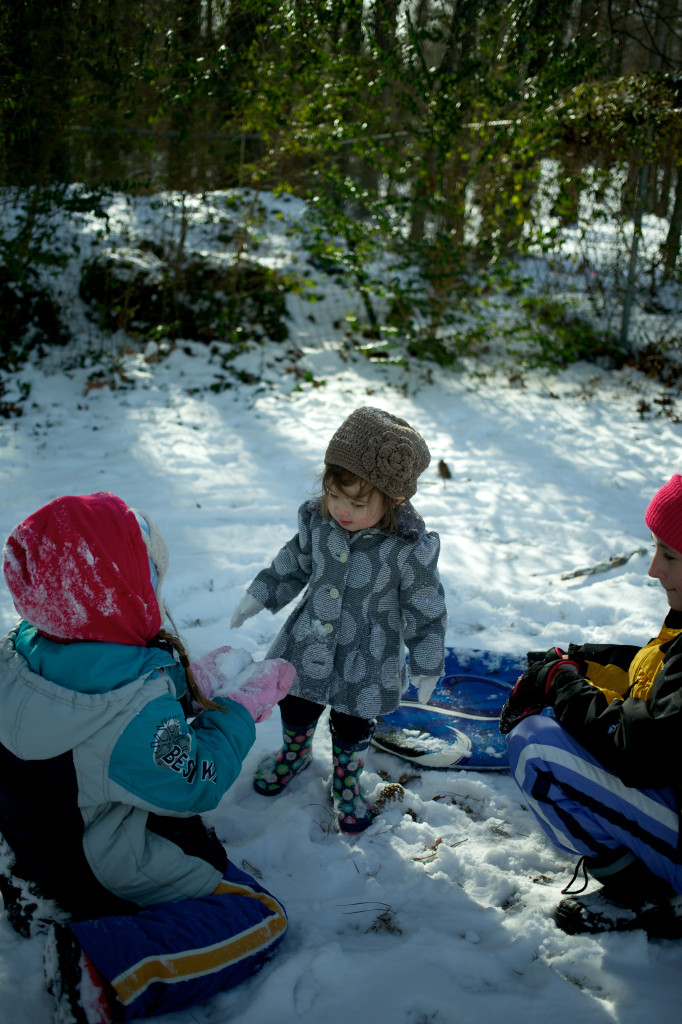 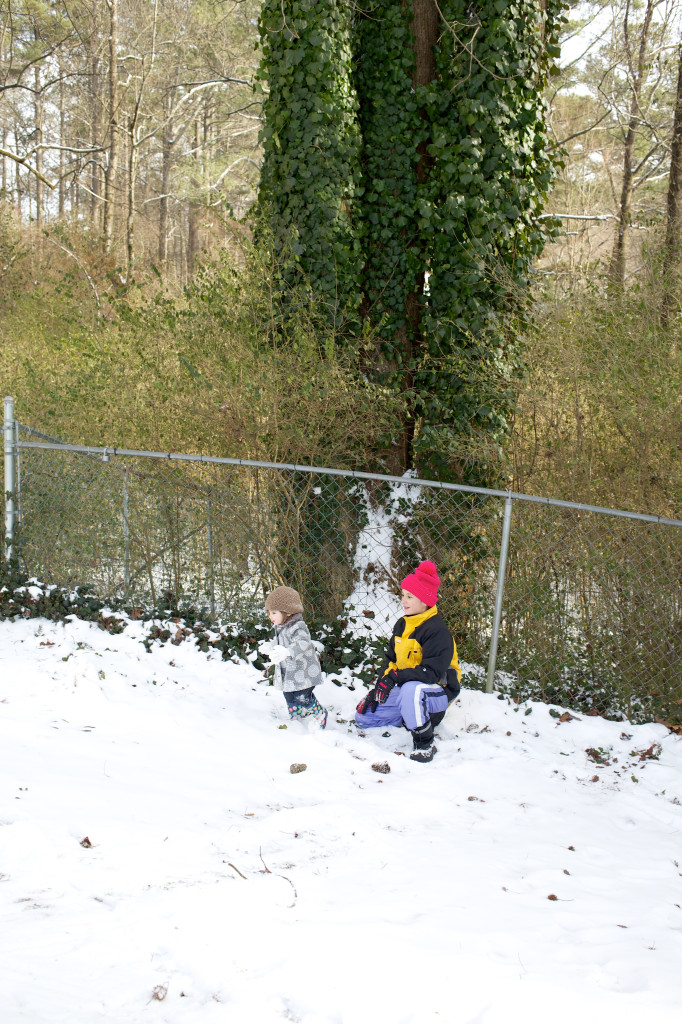 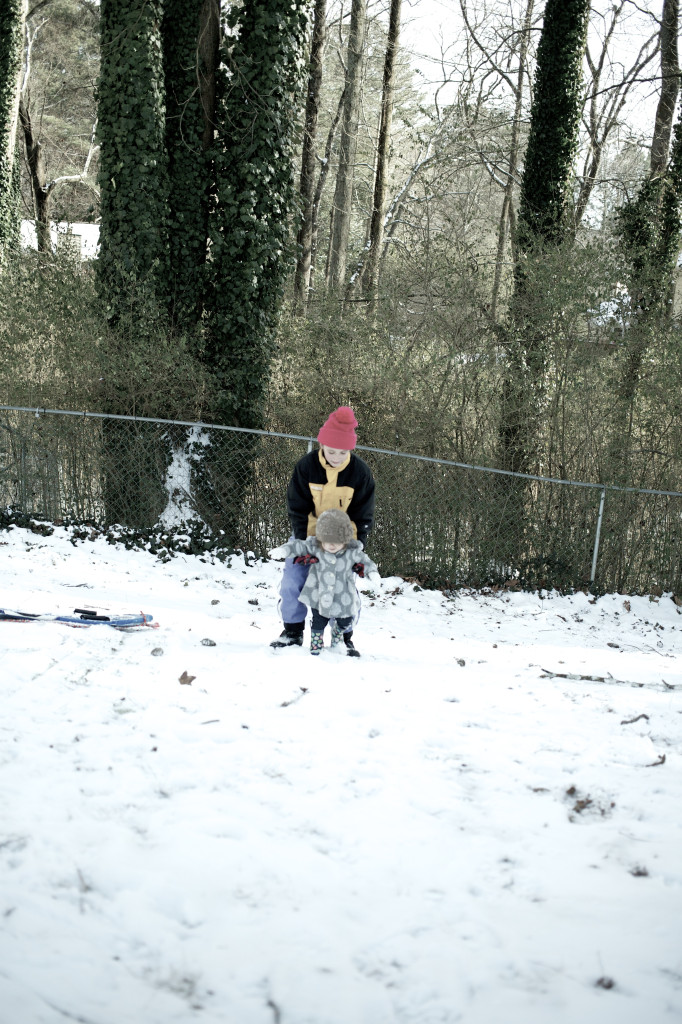