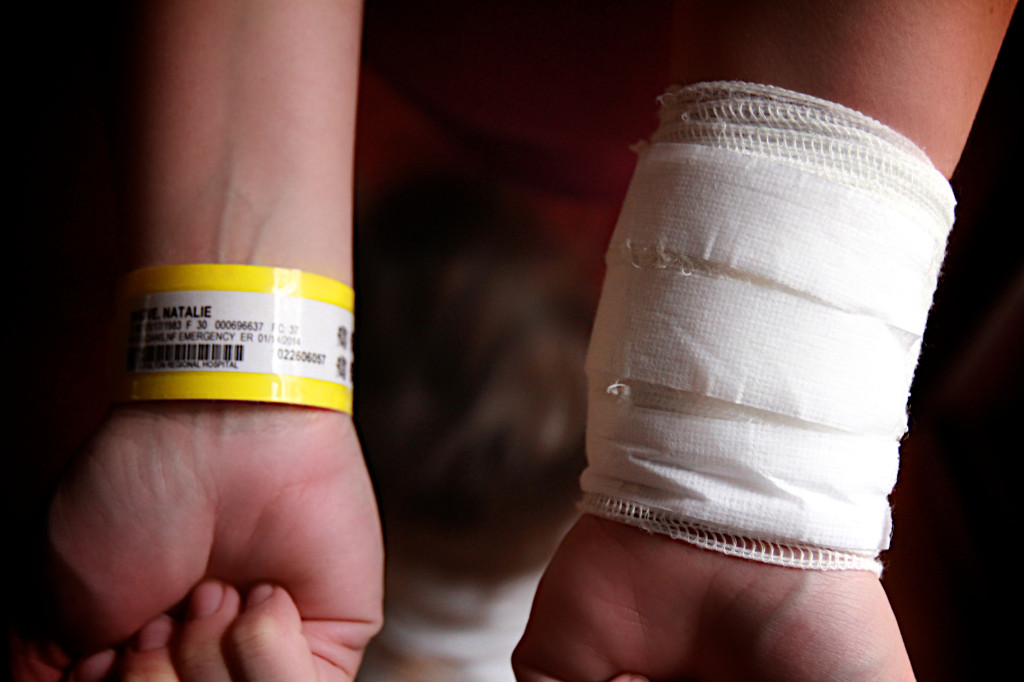 Sooo…yeah. Sometimes when you’re a crazy pregnant lady, you get an idea stuck in your head and can’t let go of it. This can either be a good thing or a bad thing, and in my personal experience, with the number of crazy ideas I come up with, I’m probably in the 50/50 range by now. :) My latest hare-brained scheme, though, definitely had a bad consequence (assuming you think going to the ER qualifies as “bad”).

Let me back up a bit. When Baby #2 came into the picture, we decided to turn Ryan’s office into her nursery. We began slowly deconstructing, packing up and redistributing all the stuff from that room in preparation to flip it into a space fit for a baby girl. As we cleaned stuff out, I began dreaming of my nursery decor–the layout, the colors, the details… It’s been one of my favorite things to think about lately, although, as I dreamt, I kept having a major roadblock when envisioning the completed nursery: Blue carpet. (Yes, blue!) The carpet in Amityville is just about as old as the house itself and (of course) is various colors depending on what room you’re in. The carpet in E.V.’s room is the same color, but since her nursery had quite a bit of aqua in the decor, I’ve come to ignore it over the past year. However, with ideas for this new nursery slowly coming together, I was feeling uber frustrated that, even after putting so much effort into creating a wonderful environment for our new little lady, anything I did would ultimately be overshadowed by the hideous, mismatched, stained blue carpet beneath all that decorating. So I began to mill my options over, and the more I milled, the crazier I got. ;)

To save a long explanation, I eventually decided that I was going to buy cheap, neutral carpet and simply lay it over top of the existing blue carpet. I found a perfect remnant at my local Lowe’s, sweet talked the manager down so that I only paid $60 (half price off the original and way less than they had it marked), and promised Ryan that he wouldn’t have to do a thing. I’ve made this promise before, but somehow poor Ryan always seems to get roped into my schemes. Thus, I was determined that this particular project was going to be quick, painless and husband-free, which seemed realistic since I wasn’t looking for perfection; I was looking for cheap, satisfactory and visually-impacting. (Ryan just smiled his knowingly when I told him my plans and kept his mouth shut like the wonderful husband he is.)

I’ve been gathering my nursery items all month (with hopes to be done come the end of January) but had come to a stand-still without having the new carpet laid. Ryan’s under a huge deadline for work, so he’s been in town but working outside of the house over the past few weeks (so us ladies don’t distract him), and on Tuesday night he decided to grab dinner out and sit with his laptop at the restaurant for a while. We were both exhausted (he’s been on the all-nighter track this week and Emma Vance’s been sick), but as soon as E.V. was asleep, my brain couldn’t stop nagging me to lay the carpet. I figured that it was a good opportunity–Ryan wasn’t home so he couldn’t get roped into my project, I was confident that it would only take an hour start-to-finish, and I didn’t have a tiny toddler at my side to make the task 10 times harder. So I set to it with my infamous (and sometimes detrimental) Talie Freaking Aquilio can-do attitude.

The time flew by, and when I was nearing the end of my hare-brained scheme, I thought about how everything had seemed almost too easy: The carpet cut like butter (cheap and thin) with my brand-new box cutter; the remnant was a perfect size and lightweight enough for me to maneuver; at only 30 minutes in, I was almost done! Yes, I was a little sweaty and extra exhausted, but I was so proud of myself! It seemed that there was even enough time left in my plans to have the room vacuumed and put back together before Ryan came home. I just knew he was going to be so proud of me. Then, as I was about to finish up the threshold, he called and said he was on his way home to continue working. :/ I warned him of my project and that he wasn’t to come upstairs until I was done. (Insert a good-natured rolling of the eyes on the other end of the line.) In that moment, even with Ryan’s surprise arrival, I felt like Wonder Woman. Thirty weeks pregnant? No sleep? No help? Ha! Nothing can stop me!

I was cutting the excess carpet from the threshold when the box cutter hit a rough patch in the carpet, bounced back and sliced…my wrist. Yes, my wrist. Talk about bad luck! In an instant blood spurted EVERYWHERE (including on my newly-laid carpet, go figure). I thought for a second that I had hit my artery, so I immediately dropped the knife and grabbed the wound and ran to the bathroom, a trail of blood in my wake. I did a super quick rinse and saw that I had missed my artery by an inch but was still gushing blood, used my thumb as a tourniquet and awkwardly maneuvered to call Ryan and his mom (who lives nearby) to let them know what had happened. Ryan stayed with Emma Vance (who slept peacefully while I practically bled out in the room next door), and Wendi took me to the ER. I’m sure it was quite a sight–big, disheveled pregnant lady in a tank top in January, waddling into the ER with her hand wrapped around her wrist, blood soaked through her pajama pants which were helplessly falling down. Really I felt more embarrassed than I felt in pain. (Plus, I felt bad that Ryan’s all-nighter started with such a sour note.) Three stitches and 90 minutes later and Wendi was dropping me back at home. (Thank you, by the way! :) ) When I sheepishly walked in the door, I asked Ryan if he had peeked in to the nursery to see the new carpet, which he had. I then asked what he thought, and with a chuckle he said, “It looks like a murder scene!” (Which suits Amityville well, I suppose.)

What did I do once I was home and settled? Finished the dang project, that’s what!

No joking, I had come too far not to finish that night. I wasn’t in any pain and had a ton of adrenaline to keep me going, so I finished up the last few cuts very cautiously, wiped blood off the door and walls and moved the furniture back into the room. I did spend about an hour with a bottle of OxyClean the next day sopping up the blood stains (which worked, hallelujiah!), all the while contemplating how my $60 project wouldn’t be so cheap of a fix now that an ER bill was in the mix. Oh, well! It’s a funny memory, right? :)

Ryan’s final take on my shenanigans? Well, he considers us even for last year when he ruptured his achilles tendon while playing flag football against my will. I suppose I’ll let him have that one…although I still maintain that three stitches and nine months of recovery aren’t exactly what I’d call “even.” :) 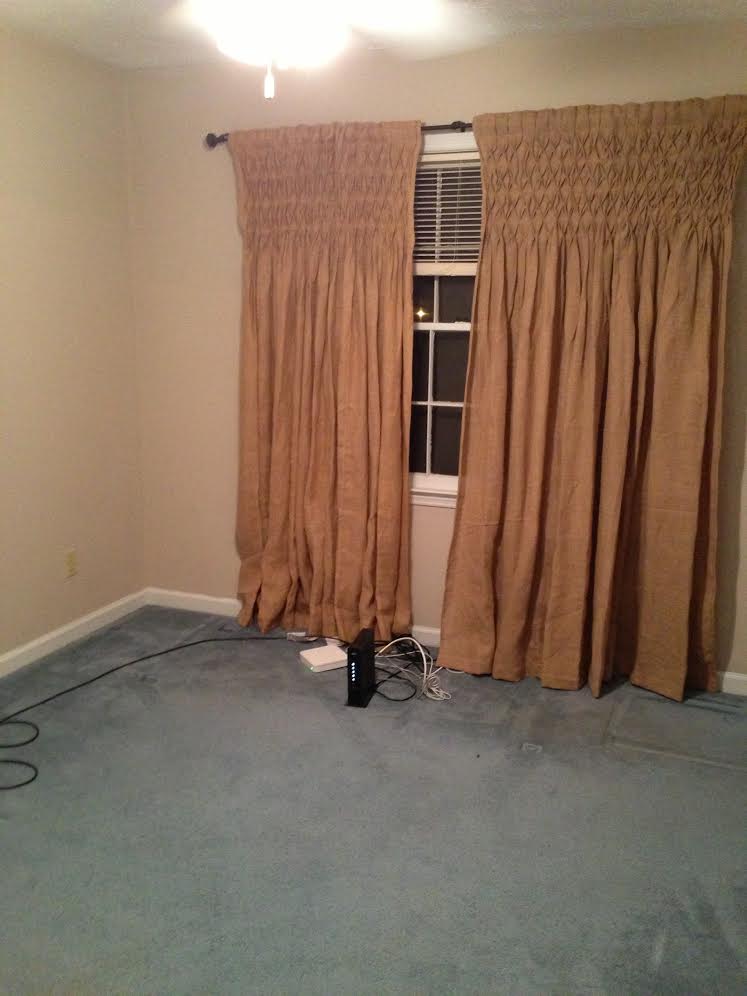 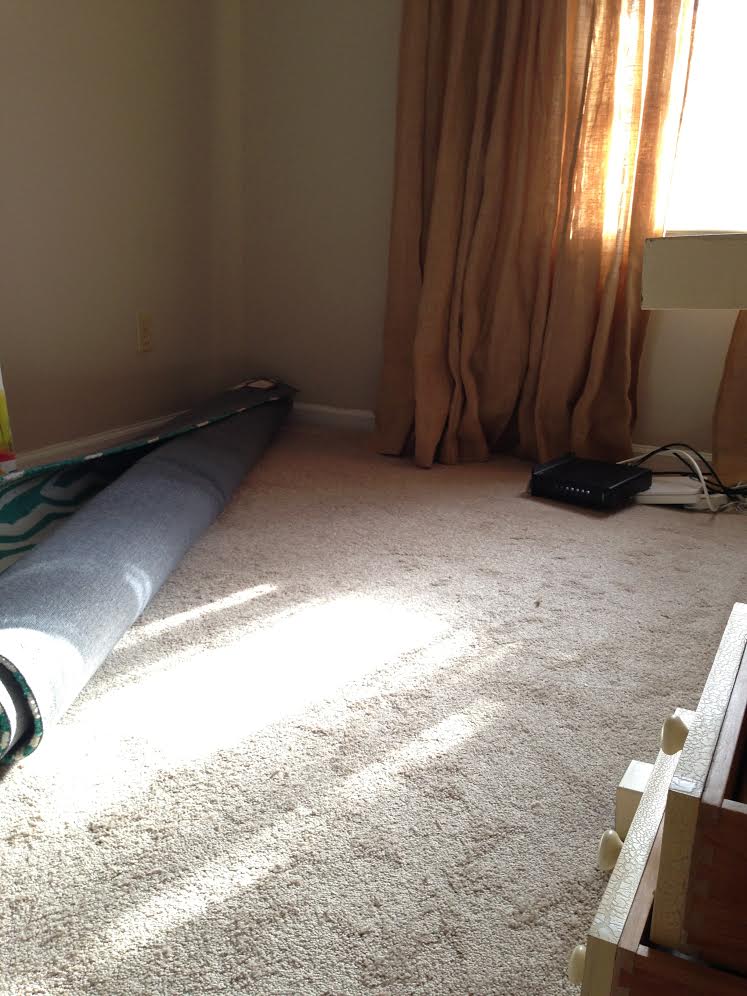 Sneak preview of my blood, sweat and tears!