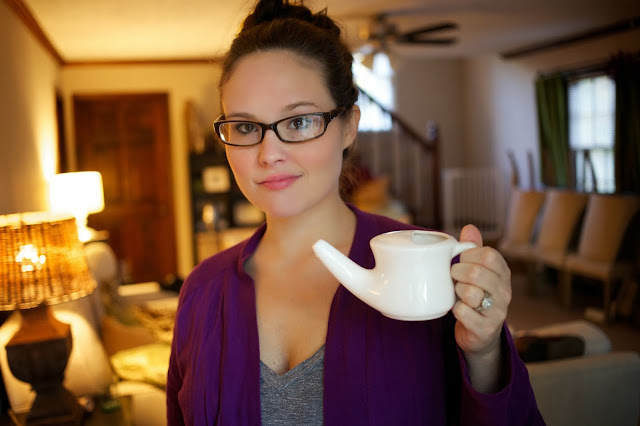 Believe it or not, when I was growing up, The Donald actually had a sense of humor. He used to tell me stories about my superhero alter-ego, about “when he was a little girl,” and about how I apparently came out of the womb dressed in Reeboks and a sweatsuit (hey, it was the 80s, so I believed him…). Anytime I ever whined or cried, his reaction was usually the same, a silly, smily barking of, “Who bit you? Who hurt you?” which would ultimately make me laugh and thus forget whatever was really ailing me. Ryan and I have adopted this little tactic with Emma Vance (and each time we say it, it always makes me smile), but yesterday I woke up and told Ryan that I felt like instead someone should ask me, “Who punched you in the face?” Only this time I wasn’t laughing, no matter how ridiculous the question…

We’ve just been getting over a bout of sickness and teething with Emma Vance that lasted almost THREE WEEKS STRAIGHT (Moms around the world, empathize with me for a moment!), and as of this weekend I had counted my lucky stars that I hadn’t really caught anything from her. However, my self-pats-on-the-back were premature because I woke up yesterday feeling like someone had punched me in the lefthand side of my face–multiple times. My eye, my cheek, my jaw and my teeth were in pain, and I was confused. Why was just the lefthand side of my face achy? How can you get a headache in only half your head? Was this the result of some terrible cavity? Did I sleep on my FACE wrong? Is that even possible?!? My nose wasn’t really stuffy; I wasn’t running a fever; and although I was tired, that’s just par for the pregnancy (and parenting!) course. I decided, in true my-body-can-heal-itself fashion, to wait a day and see how it progressed.

It got worse. As in, “WHO RAN A MACK TRUCK INTO MY FACE?” worse.

So, once again trying to be medicinally conservative, I opted to try a Neti Pot. Have you ever done one of these things? No? Don’t. Just don’t. :) We got one several years ago and have used it on occasion (Ryan more recently than I) to help with stuffy noses. I wanted to use it when I had the flu earlier this season, but I kept psyching myself out. I’d done it successfully in the past, but it’d been so long that I just couldn’t do it. I kept holding the dang thing up to my nose, tipping my head, and then chickening out. {cue Ryan’s taunting and teasing} In fact, Ryan’s final conclusion about why I couldn’t do the Neti Pot and he can was, “We’re just afraid of different things.” Really, Ryan? I’m not afraid, I just CAN’T, in the same way that I CAN’T physically DROWN MYSELF. :)

However, I was in soooo much pain yesterday evening, I decided to be a big girl and just do it. No waiting, no thinking it through, no hesitating; just doing. After a bit of pumping-up self-talk (which, yes, involved calling myself “Talie Freaking Aquilio”), I took that stupid Neti Pot, filled with warm water and salt and dumped it into my head without hesitation. Big. Mistake. BIG mistake.

I guess in the years since I’ve personally used the Neti Pot, I’ve forgotten the forward-leaning angle that it necessary to NOT internally drown yourself. (Maybe I should’ve re-read the pamphlet first?) My instinct was to simply lean my head to the side, resulting in water running straight past my other nostril and into MY EAR. Let me reiterate at this point that this was salt water in my face. Salt water. Think about that. Imagine that for a moment. (And, yes, the cringing you’re doing at that thought is merited.) I immediately snarfed the water out of my throat and nose, started hopping around and crying in pain (salty tears, which helped nothing). It took me longer than I’d like to admit to calm down (thankfully without Ryan as an audience this time around), and even 30 minutes later my nose, eyes, throat and ears were still burning. In fact, the only upside was that the punched-face feeling was gone for a few minutes, having been completely overtaken by almost-drowned-at-sea feeling. (I think I’d take a punch in the face over a face full of saltwater any day!) Darn you, Neti Pot! You win this one! Uncle! UNCLE!

After taking a full night to let the burning in my brain subside, I decided to actually go see a doctor today. I hadn’t seen my primary care doctor since before being pregnant with E.V., and two years later, it turns out my old doctor no longer takes my insurance–and NO ONE would take me as a new patient! Bah! I called my OB and begged them to see me, and they apologized and sent me to an urgent care facility. When I finally got to see a doctor, he first took a look in my right ear, which wasn’t part of my initial punched-in-the-face complaint. “Whoa!” he exclaimed, “There’s a lot of inflammation in there! It doesn’t hurt at all?!?” How do you explain to a doctor that it might have be a self-inflicted saltwater burn that is making your ear canal inflamed? :)

Anyway, my left ear was filled with fluid as well as being inflamed, and after a thorough examination, he declared that I had a sinus infection. I was sent home with a few prescriptions (but mostly a “sorry-you’re-pregnant-so-don’t-use-these if-you-don’t-need-to”). I’m on the mend (hopefully), but the scars remaining from my battle with the Neti Pot are far from being healed. As for the question of, “Who hurt you? Who bit you? Who punched you in the face?”–I can confidently say that (at least this time around), the answer is THE NETI POT! :)