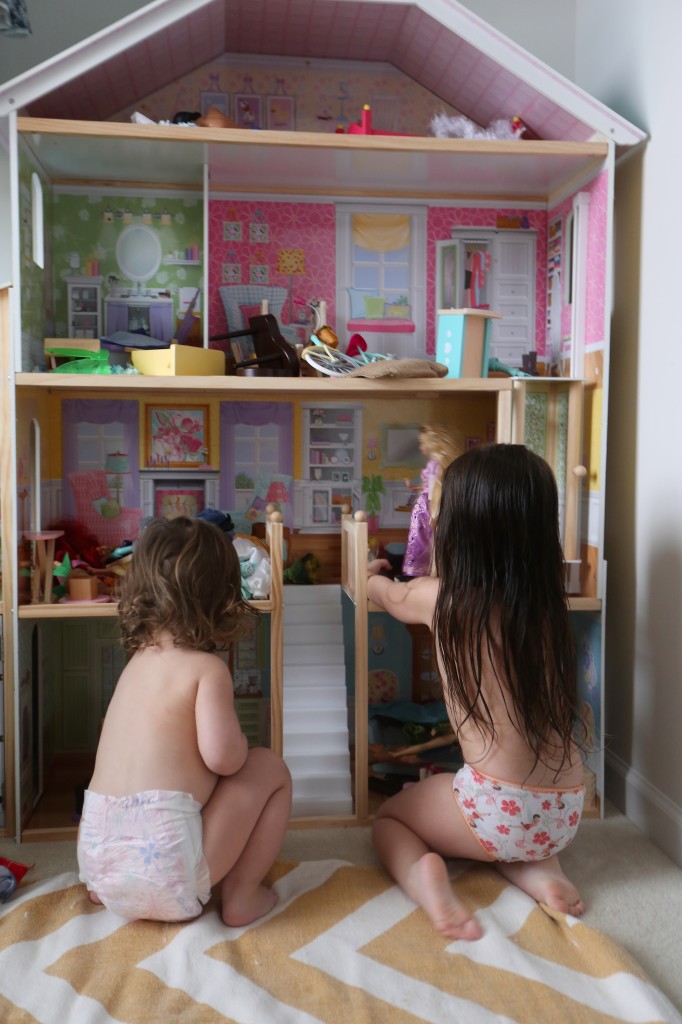 1 / 365: E.V. and Cricket playing Barbies with their brand new dollhouse — in their underwear (and diaper), in E.V.’s closet.

I thought I’d start out the new year by sharing some of our family’s resolutions. I won’t bore you with all of them, because Ryan and I are dreamers (and I LOVE me a some good goal-setting!). In fact, we even had a date night last week to sit down and work on 2016 resolutions (romantic, right?), but of course we were called home by a baby who needed her mama. However, I wasn’t about to let my fun (yes, you read that right, “fun”) be completely thwarted, so once Cricket was peacefully asleep, I sat down on my own and worked out what I wanted to accomplish in 2016. On to the new year!

First off, our family always begins each year with a TV-Free Week. It’s a cleanse of sorts, a way to reset ourselves for the upcoming year. In the past being screen-less for a week hasn’t been awful, but it seems to get more difficult with each passing year — mainly because each year the girls have gotten older but not old enough to be left completely alone. Someone is always requesting a Barbie be dressed or undressed, needing a toy reached or wanting a book (or a million) read to them. Don’t get me wrong, we love those things and do them often anyway, but there’s something about not having even a brief escape at any point during the day that is exhausting to me. (Kudos to all of my 100% screen-free friends out there! Go you!) Plus it doesn’t help that Ryan and I are both sick right now, making constant playing and being energetic a challenge. I just want to have them sit still and watch a show while I rest my stuffy head for 20 minutes, for Pete’s sake! ;)

To be honest, I can’t complain, though. The girls kept me busy today: We played dress-up, went to the gym, went grocery shopping, ate lunch, played Miles from Tomorrowland, played dress-up, sang songs with Daddy while Cricket quickly napped, took an hour-long bath ;), played Barbies, read books, ate dinner, played babies, played dress-up again and then went to bed. Mostly we played #alldaylong. I kinda’ thought that the girls would beg for television or my phone more, but they really didn’t miss it much. This morning I told them that the TV and my iPhone weren’t working this week (they didn’t question me), and it seemed to stick. However, I did accidentally pull out my phone while we waited for the gym’s child center to open this morning, and Cricket immediately furrowed her brow and cursed me, “No, Mommy! No phone!” I laughed and put it away. Apparently I might as well add “go hands-free” to my resolutions this year, haha!

I do have to admit that there were a few moments I just wanted to curl up and be still for a few minutes today. The girls dragged me around the house constantly, toddler-tornado-ing up every space imaginable while I tried to play alongside them wholeheartedly (all the while thinking about the mess I was going to have to clean up). I just wanted to be like, “Sit down and don’t move for like five minutes, okay?” But of course they wouldn’t have been able to. And tonight Cricket (who, btw TOLD ME she was tired and wanted to go to her crib) took over an hour to finally pass out. (During that hour my resolve on TV-Free Week momentarily weakened, and I felt like, “Can’t I just turn on one little ol’ movie, please???”) But she’s down now, and we’re staying strong! Princess Play-Doh and Netflix, be gone! And, if any of you receives an S.O.S. text from my at any point during the next seven days, for goodness sake, come save me ASAP! ;)