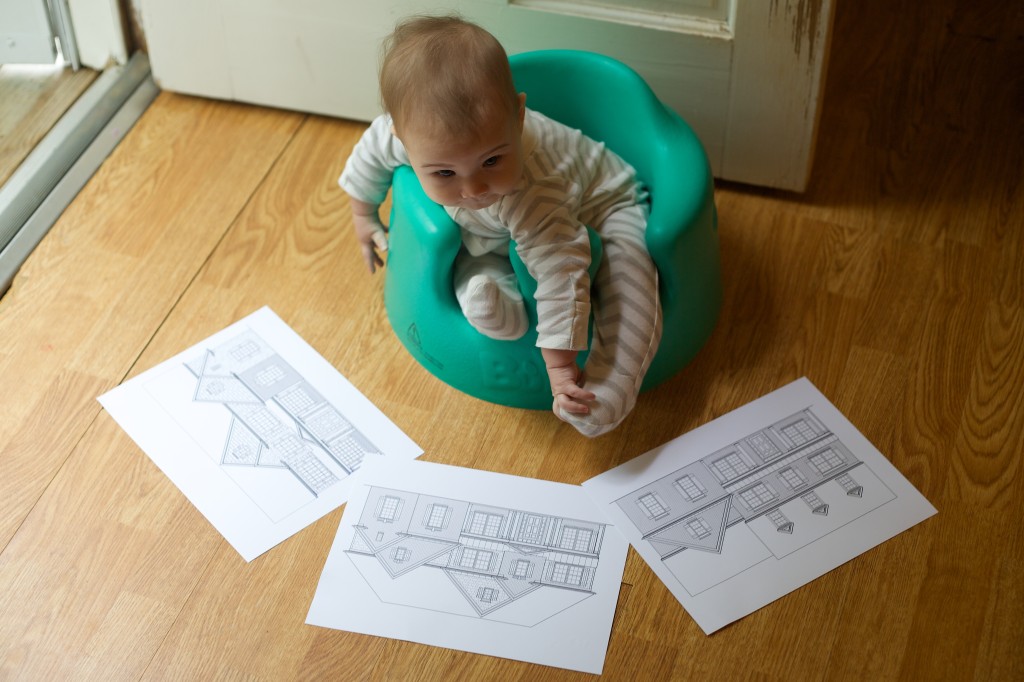 Oh, man. Life just never seems to slow down, does it? (And I have a feeling that it won’t until this house is built!)

Ryan and I just signed off on our FINAL structural changes and additions with the builder last week. It was a long and stressful process.Well, it was for us anyway; perhaps other people are just more agreeable than we are? ;) Ryan and I are a little bit OCD and particular (Who, me? No. Definitely not ME!), and so we hemmed and hawed over the house’s functional details quite a bit. The biggest debate we had was over the exterior, and until the eleventh hour, Ryan and I didn’t see eye-to-eye.

There are two important factors to make sense of our dilemma: First, the floor plan we’re building is brand new, and second, the builder won’t allow two of the same elevations to be built next door to each other. (“Elevation” is the fancy term for exterior, although I personally prefer “facade.” But whatever.) When we went to choose our lot, we were #9 in line. Our #1 lot was bought immediately, and we were so fearful that our second choice would be taken that by the time they got to us, we were in disbelief that it was still available. (Yay!) The bad news? Our two favorite lots are right next door to one another, and not only did someone buy our first choice lot, they also chose our floor plan! Typically this wouldn’t be a big deal because most floor plans have several elevations/facades/exteriors to choose from, but since ours was a brand new plan, there was only ONE elevation available. Clearly someone at the building company made an oversight, and so they informed us that not only would we be able to build our preferred floor plan, but we’d also get to DESIGN OUR OWN ELEVATION. (Wahoo!)

At first I was ecstatic. I mean, by being given the opportunity to design a custom elevation for our non-custom home, I felt like I was winning the lottery! The only problem was that Ryan and I never dreamed we’d get this chance, so we didn’t know what we wanted. (Yikes!) Our gut reaction was to tell the builder we wanted something farmhouse-y, and we were met with a blank stare.

It’s so funny because what’s “in” changes so quickly in the Pinterest world, but apparently not so fast in the building world. Since the agent didn’t have a frame of reference for what we were talking about, he pulled out the existing elevation and asked us to mark it up. (Now it was our turn to give him a blank stare.) We made a few annotations on the spot, but we weren’t confident in what we had suggested. 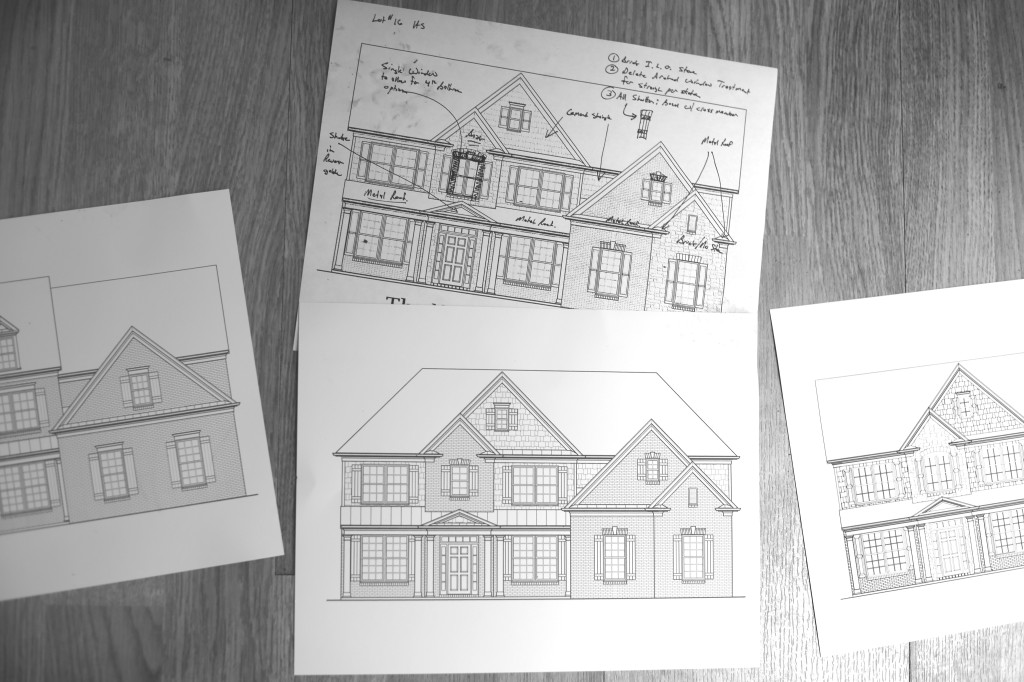 Meanwhile, unbeknownst to us, a friend of ours (Jenny, who is a fabulous designer over at Long and Found) happened to be designing a farmhouse elevation for our builder already! Since designing facades isn’t really in our wheelhouse (haha), we were SO excited to discover that someone with amazing taste (and an actual, physical vision) was already working to create a farmhouse-y option. As we talked through it with Jenny, I started to get really excited about her ideas; she was able to articulate the farmhouse feel way better than we had. And then, as we were working through both our redrawn elevation and Jenny’s farmhouse facade with the builder, something crazy happened — our neighbors changed floor plans! The original elevation was back on the table…which only complicated things more.

A few weeks later we had three drawings sitting in front of us, as if we were starring in some HGTV show (please, one day maybe?):

ELEVATION B – Elevation A with some tweaks ($)

Then the debate began. There were so many pros and cons to each elevation; it became a nightly debate. I was set on Elevation C, but Ryan was wishy-washy. Because farmhouse facades are simple, he was fearful that maybe it would come across as plain. (I disagreed. I called it “classic.”) Then, of course, there was the financial side of it and the fact that he didn’t hate Elevation A. (I did.) So we began to put the pedal to the medal and drive new neighborhoods to get ideas. It became our hobby and eventually our mission. I’m pretty serious when I say that if you live within a 10 mile radius of downtown Alpharetta, we’ve probably stalked your neighborhood. That old school Durango creeping past your house? Yup. That was us.

By the end of our month-long trek across metro Atlanta to look at house exteriors, we had both conceded that Elevation B was for us. Well, rather, Elevation B was as close as we could come to agreeing. ;) In my heart I wanted Elevation C still, but I was willing to compromise. (Welcome to marriage, amIrightorwhat?) Ryan’s biggest thing was that he wanted a couple of textures (shake, stone or brick mixed ‘n matched), and Elevation C was all brick. It had become a debate about materials, and I couldn’t help but think of us as The Two Little Pigs, picking between straw and sticks and brick houses. (What was the moral of that story again? ;) ) Since I like shake and brick together, I agreed to Elevation B, but even as we started working through paint colors and brick choices, Ryan was still wishy-washy. (Men!)

The night before we had to declare our elevation selection we took one last drive around to look at houses. We found some really cute ones that we agreed we could see ourselves living in. However, we kept trying to make those facades translate to Elevation B — without much success. Then, at midnight, Ryan was sitting in a pile of house papers, practically drowning when he said to me, “We need to do Elevation C.”

“Really??? Okay.” {notice how I didn’t even question his declaration for fear of him taking it back, haha}

“That house we saw today on our last drive around was amazing. And it’s closest to Elevation C.”

It turns out that, in the end, Ryan saw what I had seen from Day One. Jenny’s farmhouse vision was what we had been dreaming of all along. It just took Ryan a bit longer to get there, like a typical guy. ;) I do have to say, though, that his indecisiveness forced us to do a lot of soul searching about what we really wanted our home to look like, and so I’m thankful for that; it gave me a lot more confidence in our direction. Our house will be 100% (painted) brick, and so the moral of the story is that we learned from The Three Little Pigs themselves and now our future house is wolf-proof.

So, drum roll please, here it is — our next house! (Minus the door style because we haven’t decided that yet. That’s a debate for the future…yeesh.) 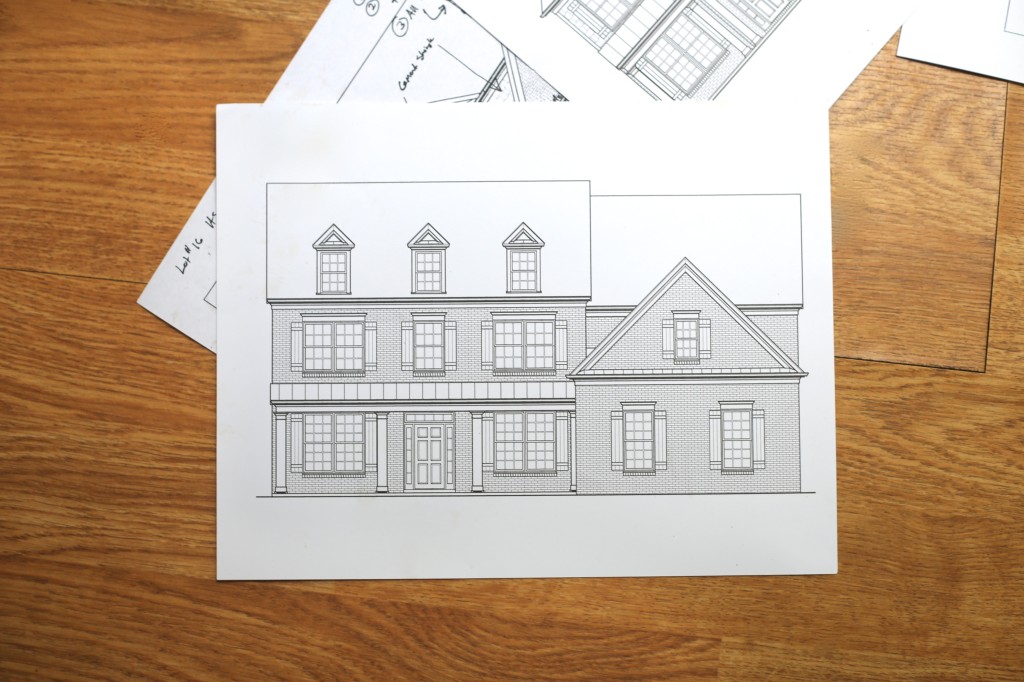 Wait, that wasn’t as exciting as you thought it’d be? I agree. 2D drawings are so hard to envision! Now maybe you can understand why we had to do so much house hunting in order to be able to make an educated decision. :)

THANK YOU Jenny for all your hard work and for letting us benefit from your creative vision. You rock, girl!