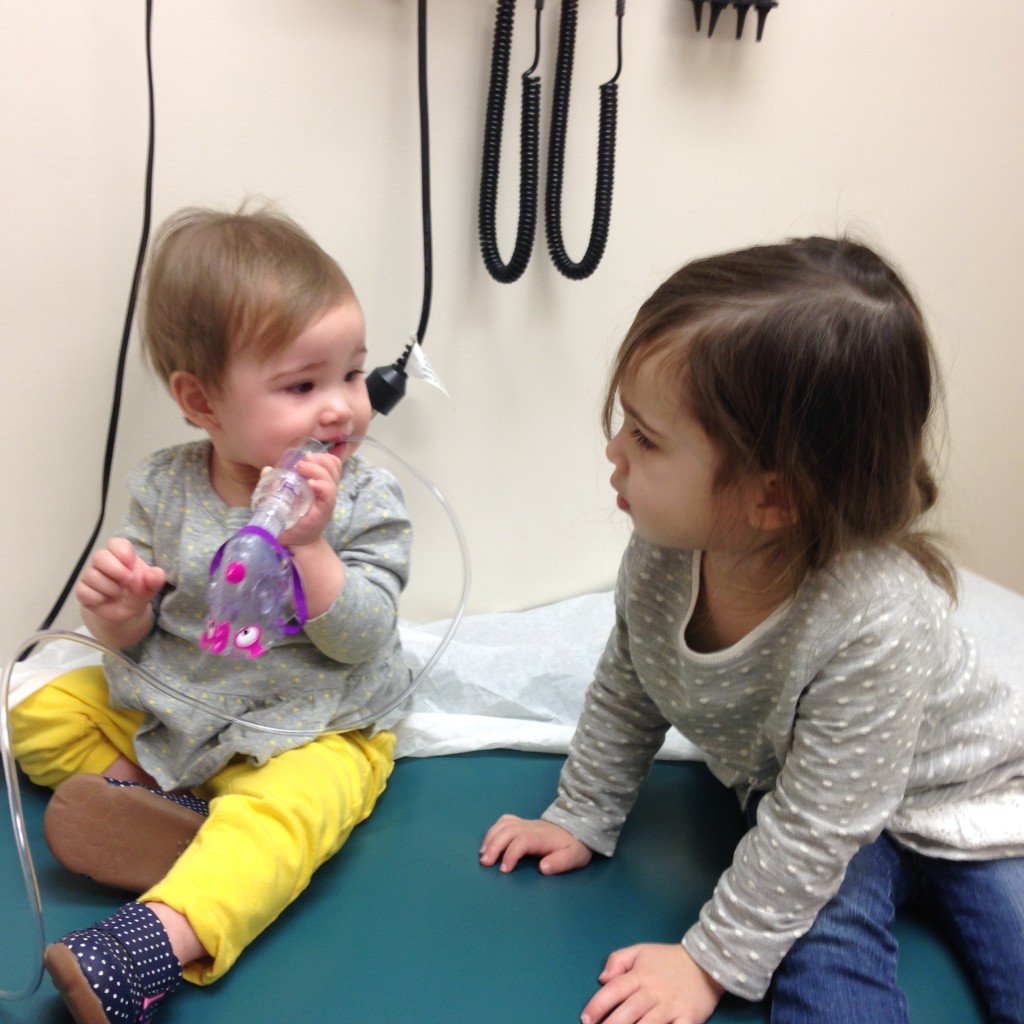 Since it’s Friday the 13th, something was bound to be bad today, right??? Of course it was, and in our household, the curse showed up in the form of a sick baby. (That’s the motherhood version of Friday the 13th, haha!)

Earlier this week Cricket picked up a cough and for the past few days has been running a low-grade fever. Since the weekend was coming up, I figured it was worth the trip to the pediatrician this morning just to make sure everything was okay before the doctor’s office closed for a few days.

At the crack of dawn, I toted both E.V. and a coughing Cricket to the pediatrician, and I’m so glad I did! I had predicted the doctor would diagnose Cricket with croup, but after listening to her lungs with the stethoscope, she was concerned because she heard some significant wheezing. Afraid that there might be pneumonia lurking in her lungs, the pediatrician decided Cricket needed an in-office breathing treatment to see if she could get her airways open up a little bit.

Ryan and I have been very lucky that E.V. and Cricket have both been pretty healthy babies (save for the typical infancy illnesses). We’ve never had to do breathing treatments though, so I didn’t know what to expect. The nurse brought in a small machine and a dinosaur-shaped mask to put over Cricket’s nose and mouth. Intuitively Emma Vance was frightened, and thus, at the sight of the medical equipment, she began to freak out. She scrambled up on the table and grabbed Cricket, screaming at the nurse to go away. Tears were in her eyes and her face turned bright red as she yelled, trying to protect her little sister. She kept saying, “No! The dinosaur is going to hurt Cricket. Dinosaur hurt! DINOSAURS HUUUUURT!!!” I’m pretty sure that any hopes of E.V. becoming a paleontologist were completely obliterated this morning. In fact, she might have come away from this appointment with a fear of dinosaurs, so, yeeeeeah…thankfully that whole extinction thing is working to our advantage right this minute. ;) Once the treatment was set up, I had to calm and fight off Emma Vance while simultaneously holding Cricket in my arms and attempting to get the breathing mask to stay on her. And, of course, the treatment was 15 minutes, which seemed like fooooorever in that situation. (And I have to mention that Ryan somehow always seems to miss the hard doctor’s appointments. Hmmmm. ;) )

Truthfully, as rough as the situation was, I had a hard time being mad at E.V.’s reaction because it was the first time she’s ever tried to protect her little sister. I’ve never seen her more frightened than I did in that moment, and it was actually very sweet. I think it’s the first time that E.V. realized that she has the power to keep harm from another person, which was a wonderful thing to see the midst of that crazy moment.

Once the breathing treatment was over, I thought we were out of the woods. However, the doctor wanted Cricket’s oxygen levels checked as well, which required the nurse coming in with yet another machine that connected to Cricket’s finger. Bad idea. Taking away the dinosaur mask had calmed E.V. down, but as soon as the nurse walked in the room with the oxygen tester, Emma Vance started screaming and sobbing, so we opted to leave for that part. (It’s so hard to explain to a toddler how things can be helpful even when they seem scary.) Thankfully Cricket was as good as gold for the nurse while we were gone, and it was a quick test with ideal results.

When everything was said and done and the doctor rechecked Cricket, the wheezing had gone down a little bit, so she sent us home with a prescription for an inhaler and chamber to do breathing treatments at home. Thankfully pneumonia was ruled out, and Cricket was instead diagnosed with bronchiolitis. Since her fever’s down, she’s not contagious, but the doctor said it will take a while for her cough to go away and her swollen airways to heal. Read: We’re in for a string of rough nights full of coughing fits and wheezy snoring, womp womp.

Although our Friday the 13th started off pretty rough, the silver lining was definitely seeing the sisterly love developing between my two girls even this early in life. As for poor E.V., her silver lining was that in the midst of the madness I had tried to bribe her into submission with the promise of a heart donut from Dunkin. Despite her ignoring my bribe in the moment, she somehow magically remembered it once we were safe in the car. And you know what? I obliged because sometimes you just need to reward a big heart with a special heart donut, right? ;) 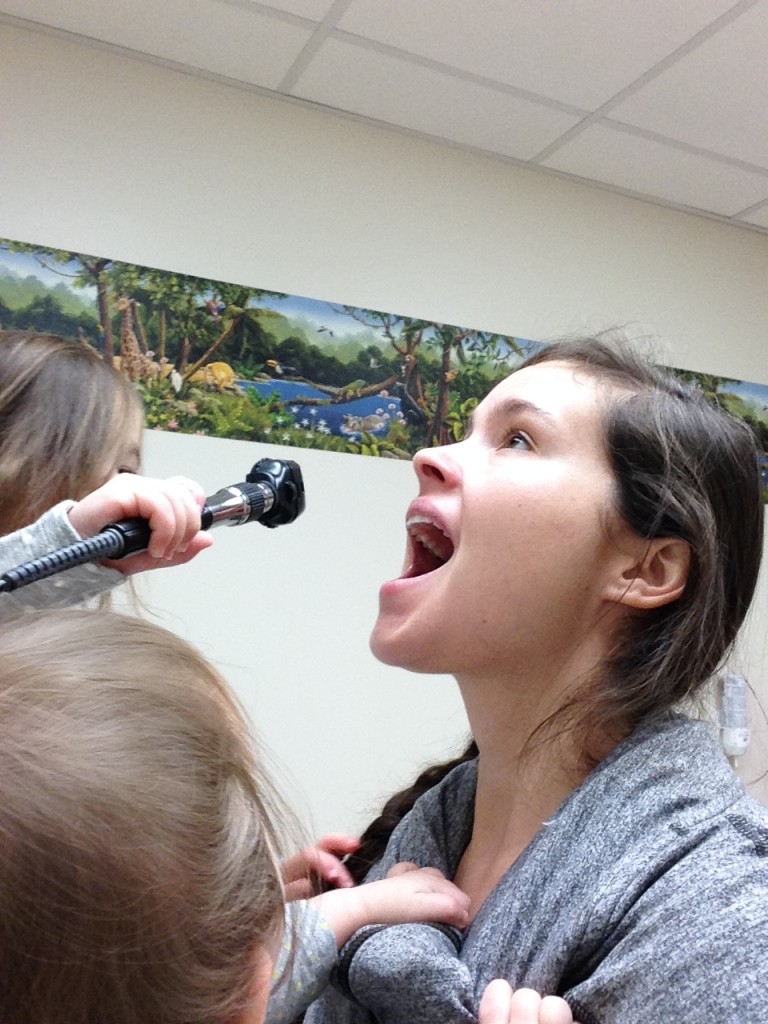 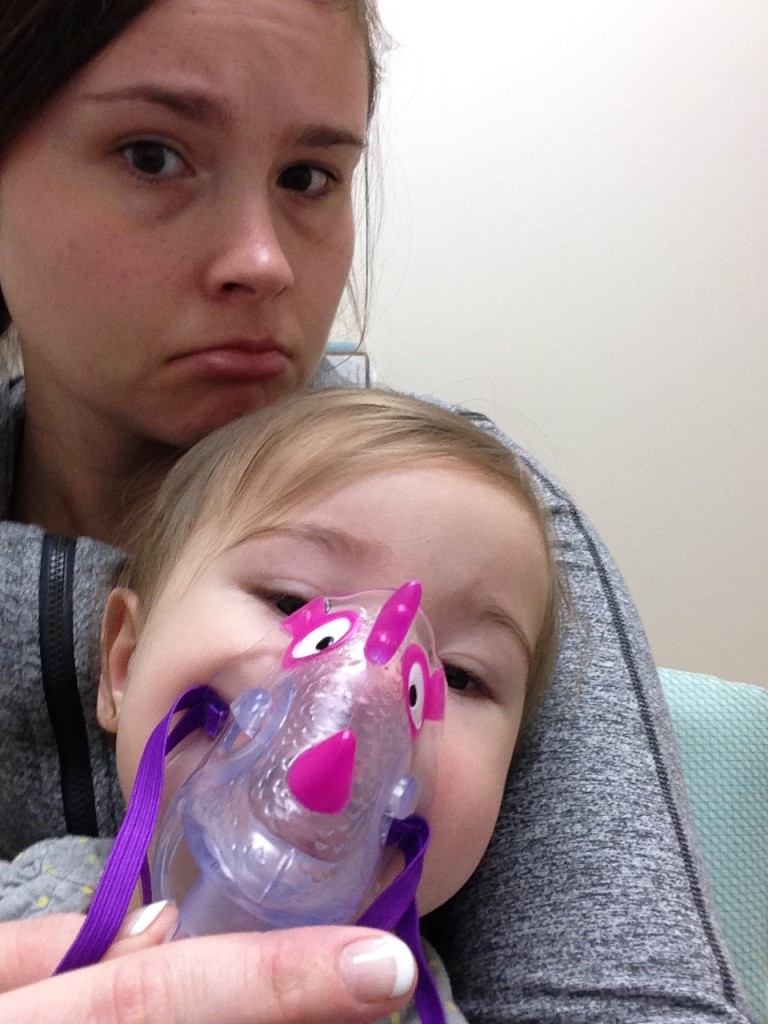 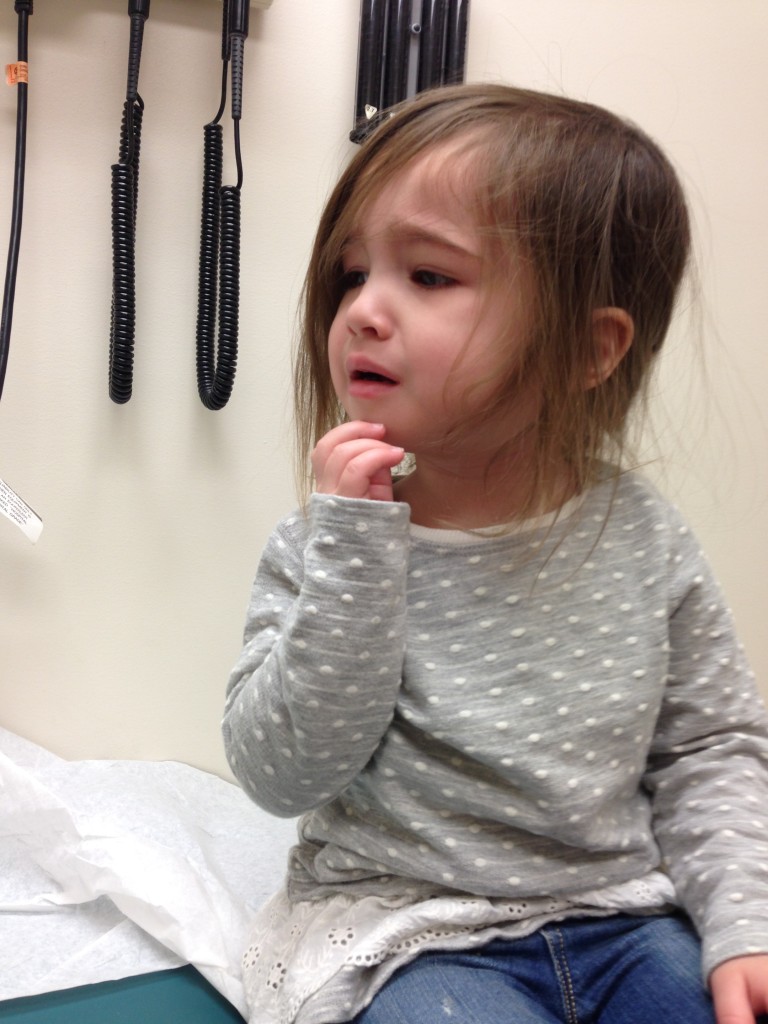