We had quite a Christmas here at the Shove household. It was E.V.’s first, and although I’m a little regretful that it happened in our temporary home and not the house she’ll grow up in, we made the best of it. Every year I let myself buy just a few new Christmas items, and this year I opted to put my budget toward live bay leaf garlands, which, to my surprise, ended up smelling SUPER strong. In fact, I regretted my purchase for the first few days because their smell permeated our house, but once they began to dry out, they were amazing. I love the lush, natural feel they gave to our Christmas decor. We always have a matchy-matchy tree (and I suppose we’ll have a smaller, kid-centered one in the coming years), and my existing green and silver ornaments enhanced that natural vibe we were going for. Since I splurged on the garlands, the only other items I added to our collection were ornaments from my mother’s childhood that Mrs. Emma Vance mailed up to me from Florida and a “free” mantel craft project, an art board for which I already owned everything I needed. It’s so funny how loooong it takes to get everything up and how quickly it comes down…especially since I’m always ready to repack everything at 12:01 a.m. December 26th. On to the New Year, right?

For posterity’s sake, here’s a few of our Christmas decorations from Emma Vance’s first holiday: 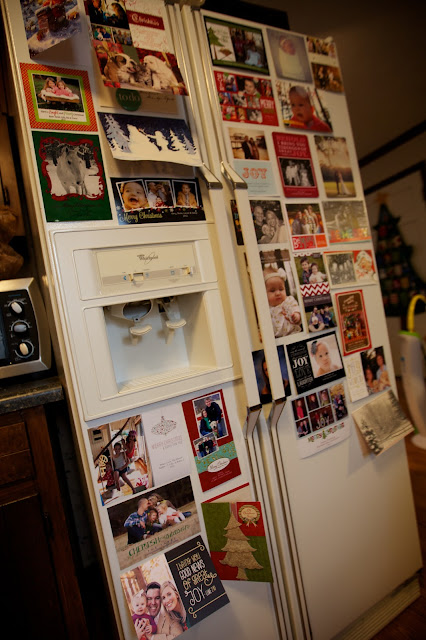 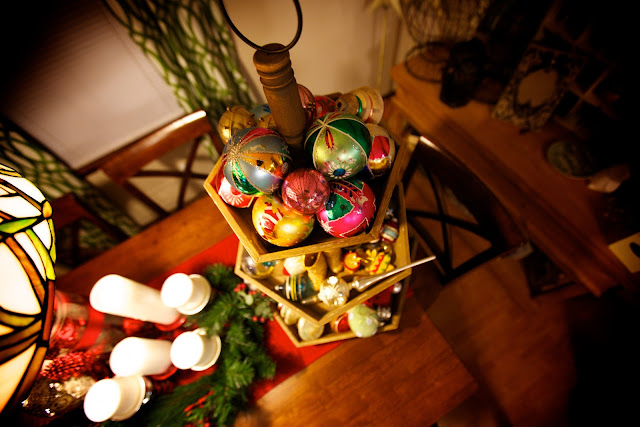 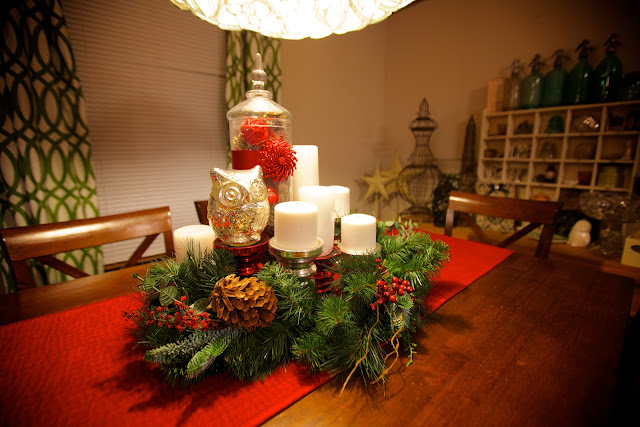 To celebrate the big day, we had three major events: Wendi’s Christmas Eve party, breakfast at our house and Christmas dinner at Wendi’s.

Christmas 2012 started with Wendi’s semi-annual Christmas Eve party. She decorates and cooks and bakes for hours on end, and then hosts an open house for friends and family. This year Emma Vance wore a dress from Nanny, and I can’t help but smile and think of “Elf” when I look at these pictures. How appropriate for the night Santa Claus comes to town! :)

We spent the night eating and talking with Ryan’s family, my family and Wendi’s friends–and Tree and Jenny, aka “The Foxes” stopped by too! When she began to get sleepy, I tried to put Emma Vance down, but the laughter and ho-ho-ho-ing from the mechanical Santa downstairs kept our little elf wide awake, and eventually we rejoined the group for a bit before heading home.

Now, before telling you about the next event, I must catch you up on the Aquilio family “Legend of the Christmas Ketchup.” Many years ago, my sister-in-law, Jill, and brother, Tony, came up with a fabulous idea: Since they were the only ones with kids, instead of carting them around see the rest of the family Christmas morning, they invited everyone to have breakfast at their house. That way the kids could open gifts from mom and dad and Santa alone and then mid-morning grandma and grandpa and aunt and uncles came by with their gifts for a separate time; everyone got to see everyone and still got alone time, and it was a great concept that made everyone happy. It became tradition that they would serve potatoes and Jimmy Dean Scramblers, and my dad in particular looked forward to it each year. A few years ago, my dad showed up and sat himself down to eat as the kids opened gifts, only to discover that Tony was running low on ketchup. By The Donald’s reaction, you would have thought that his son had committed high treason, and it became a running joke that anyone who hosted my father at their house had better have adequate amounts of ketchup on hand. In fact, the following year my mother gifted Tony with ketchup on Christmas morning to get a chuckle.

Tony and Jill and E.V.’s cousins have moved to Florida, and thus the honor of hosting Christmas morning fell on us this year. We invited Ryan’s family to attend our “super casual, no frills, no obligations” breakfast, and it was a great time where everyone could eat, open a few gifts and visit. The night before Ryan and I had a disagreement about the course of events in the morning: I told him that I should cook because he wouldn’t have the time management skills to bake and cook everything on time, and he told me that he should cook because if I did then everything would taste bad. We resolved that we were both right, that Ryan should cook and I should help him plan it out. Everything turned out delicious–save for TWO burned batches of muffins, which both gave us a good laugh and clued us in that our oven cooks way fast. And, of course, we had a brand new bottle of ketchup ready and waiting for The Don.

After everyone left, we rested and played for a while before our final event.

Christmas night we went to Wendi’s for dinner and presents (because there were way too many to cart over to our house!). Aunt Alana cooked the juiciest turkey I’ve ever eaten, and Mike ordered in Junior’s cheesecakes for dessert. Then it was on to the gift opening, which took longer than usual with the addition of a baby to the mix. :) By the end we were all sleepy and worn out from a long day of celebrating, so we said our goodbyes and headed home to pass out. We gave literal meaning to “Merry Christmas to all, and to all a GOODNIGHT!” :)

Overall, it was an eventful first Christmas for Emma Vance, and we’re already thinking about her next one! :)