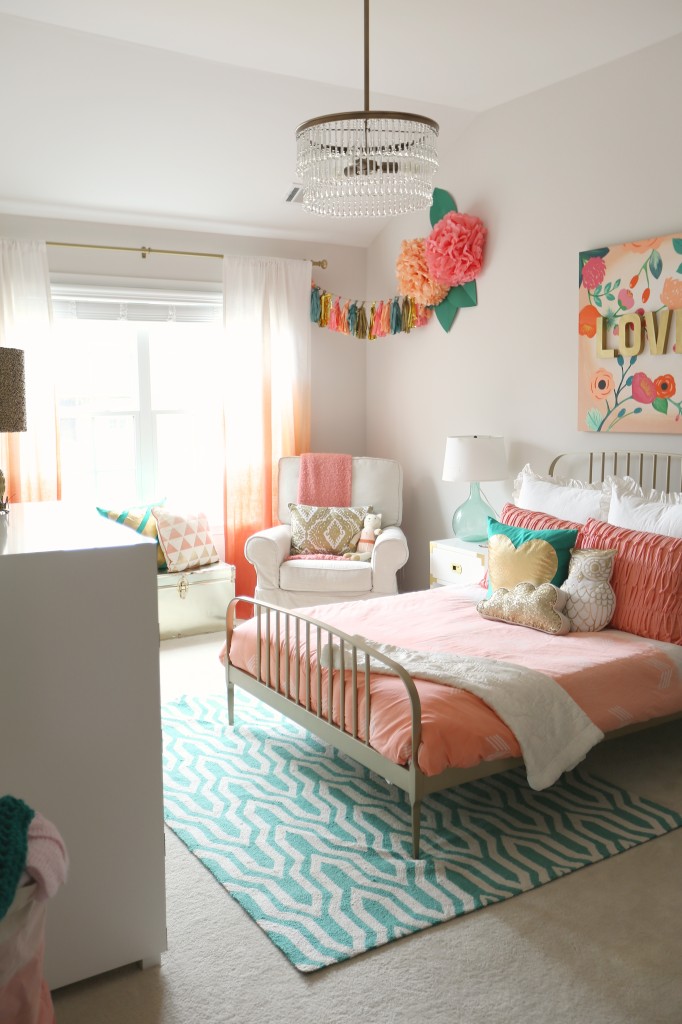 Next on the house tour…Cricket’s room!

Much like Emma Vance’s room, Cricket’s current decor is the result of transitioning her nursery into a big girl room while trying to get more mileage out of her nursery decor. With E.V., we waited until she was three before moving her to a bed, but Cricket was d-o-n-e with her crib around 18 months. (Really, in true second-kid fashion, she wants to do everything earlier and faster!) So, at less than two years old I made the tough choice to give into Cricket’s requests and create a more kid-like, less babyish space for her.

Since I had chosen blues, greens and yellows for E.V.’s room, when I found out I was having a second girl I decided to basically do the opposite for our next nursery. I chose coral, peach, emerald green, gold and black for Cricket’s decor, and most of those colors transitioned nicely into her big girl room. I wanted desperately to keep the emerald green rug that was so hard to find and the peach ombre curtains that have since been discontinued, so those were non-neogitiables for me. Thankfully I easily fell in love with a(nother) Land of Nod bed that went well with my color scheme with its matte gold finish, but I had difficulty settling on a bedspread. I chose a neutral, all-white covering for E.V.’s room, so I needed something different for Cricket. Thankfully as I went to order that dreamy gold bed, I ran across an ombre peach duvet on LON’s site, and it brought my other bedding accessories together exactly like I had imagined!

My only real struggle with the decor transition was with the black accents in her nursery. Truthfully, Cricket ended up with a black crib because my crazy self owned a “boy” crib waaaay before I had even one kid (It was on super sale, people!) and I had decided to make it work for Cricket regardless of gender. I mixed white and black furniture in her nursery to give it intentionality, but when Pottery Barn Kids had a killer sale on some campaign-style furniture a while back, I began slowly replacing her nursery pieces — with all white ones. Once the crib was gone, I was left with just a bit of black in the space, and I had a decision to make. After much internal debate, I opted to get rid it. Unfortunately I haven’t gotten around to fully moving the last of black furniture out (So. Heavy.), so there’s a bookcase and armoire that I’ll remove eventually. I’ve got plans to do a geometric treatment to the wall where the bookcase is, and plans for this upcoming Christmas that will require moving Cricket’s rocking chair to where the armoire currently is. As for now, I just try not to look too hard at that side of the room, and when I do, I just remind myself that I’ve got time to make those changes down the road. ;) There are only 24 hours in a day, self! 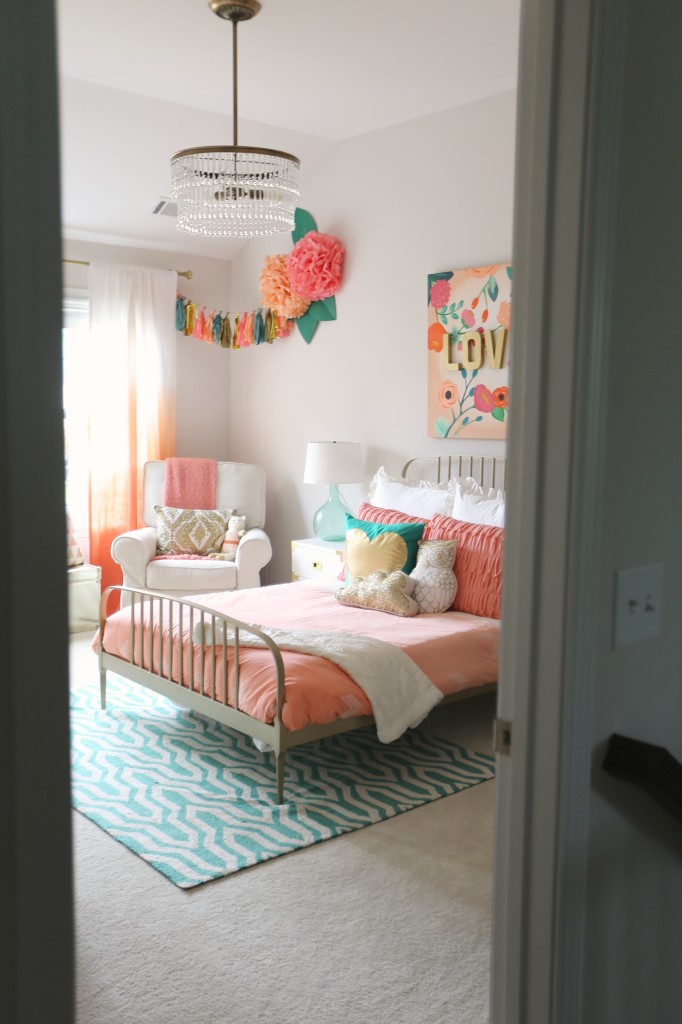 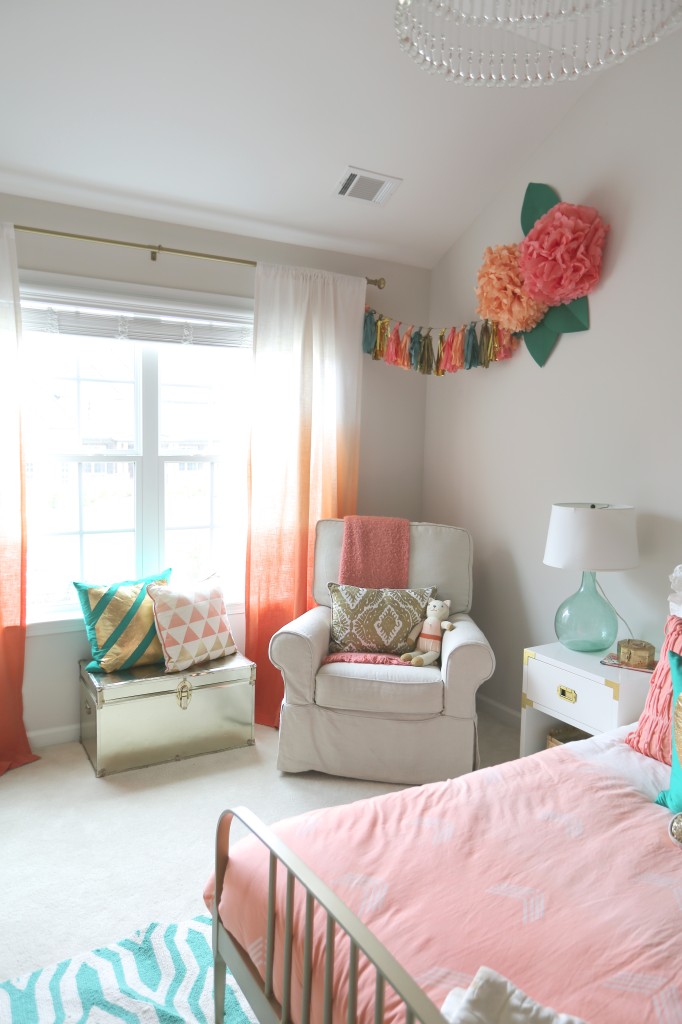 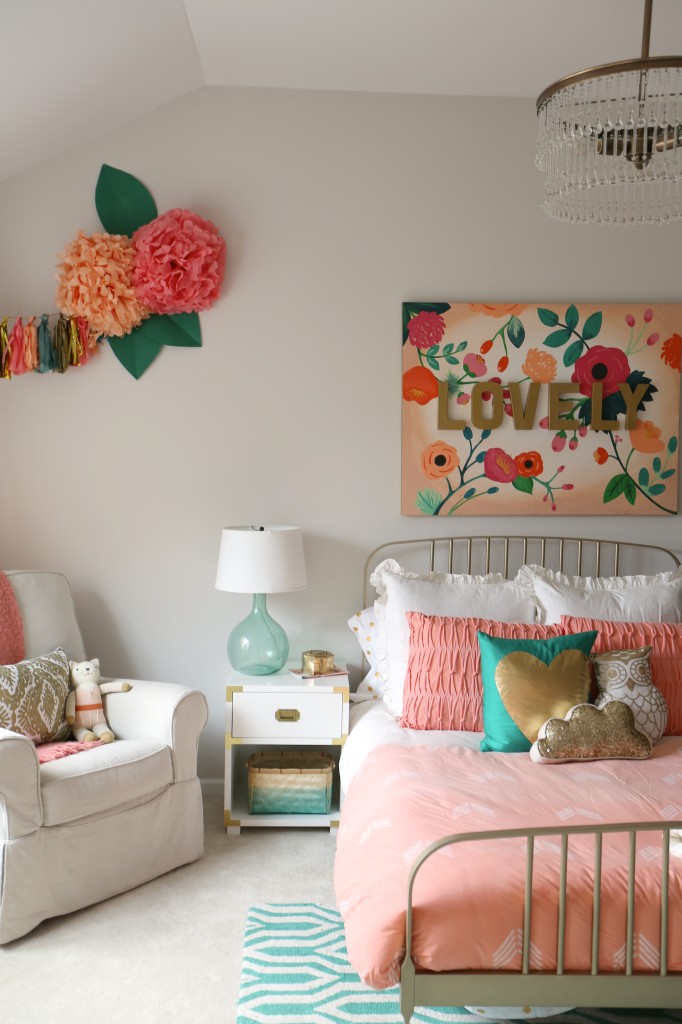 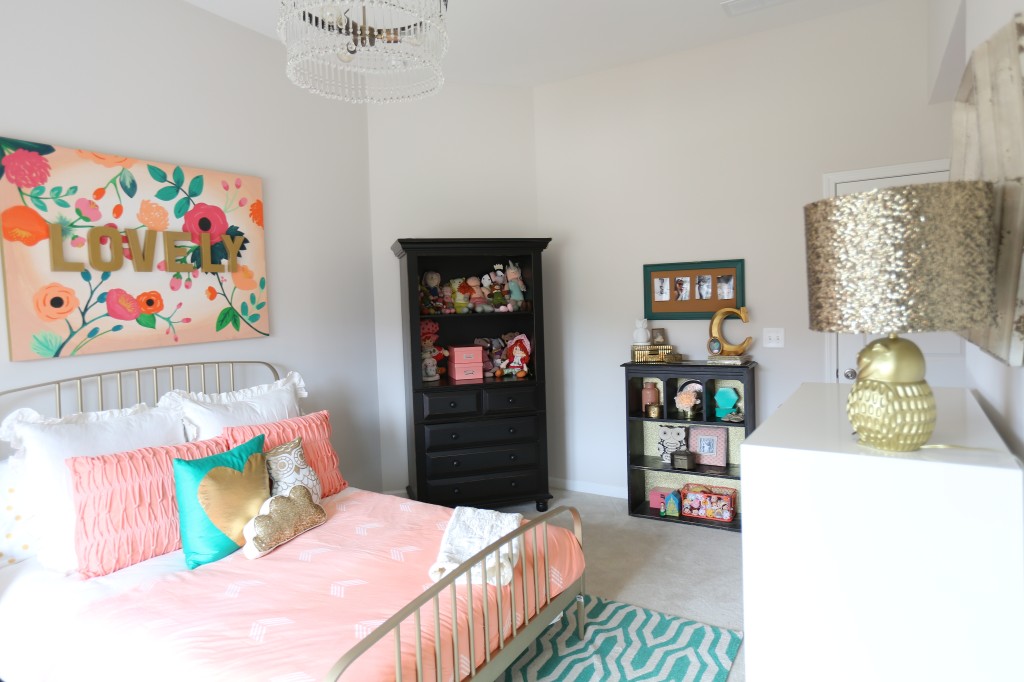 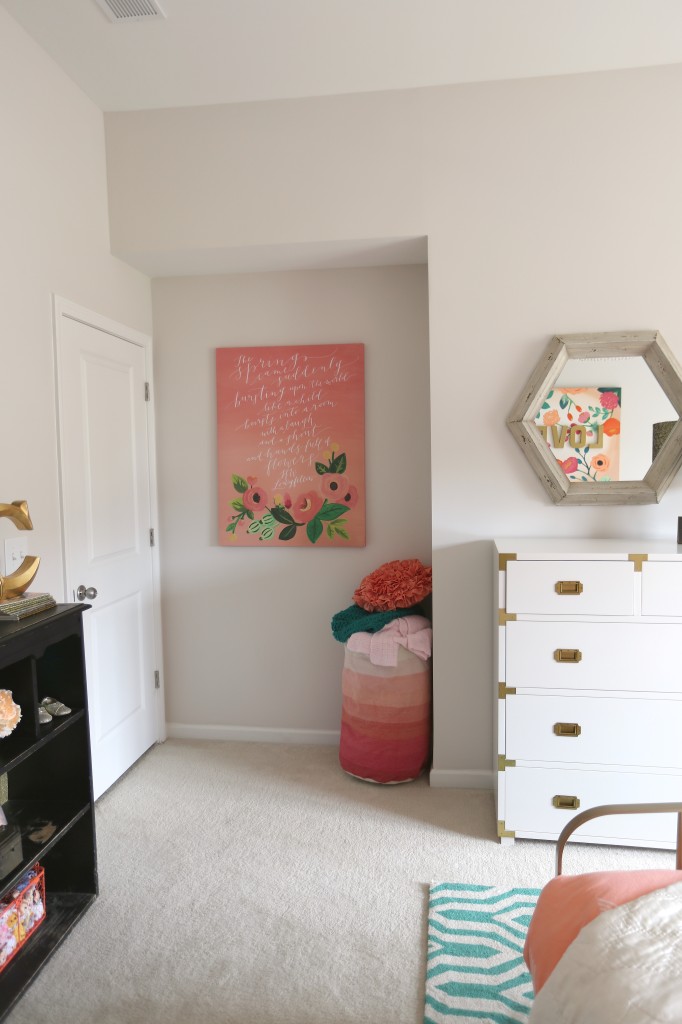 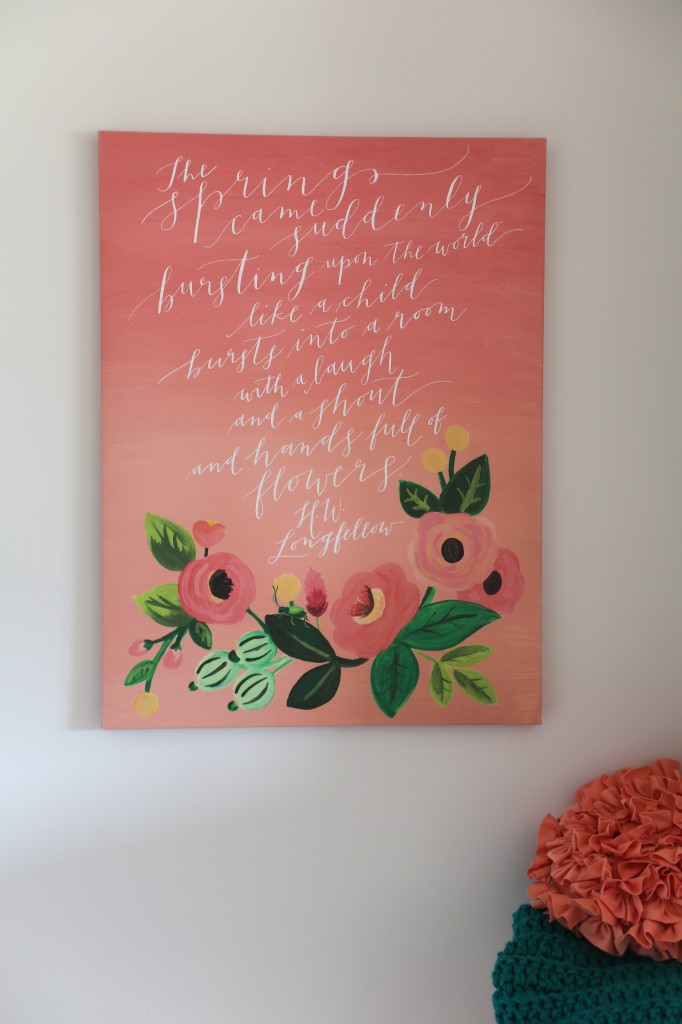 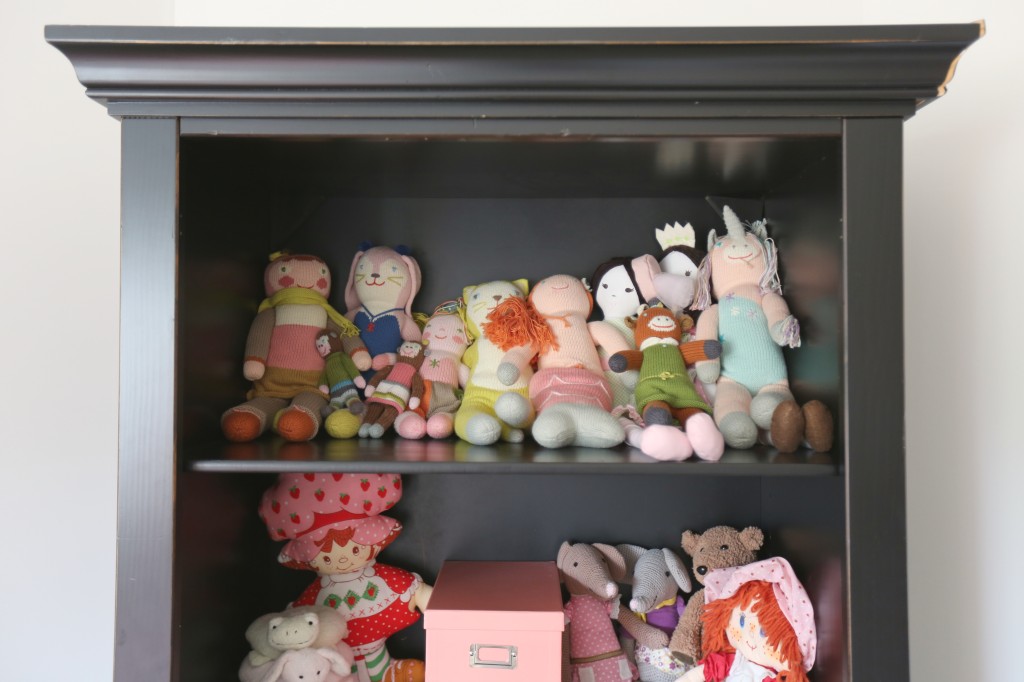 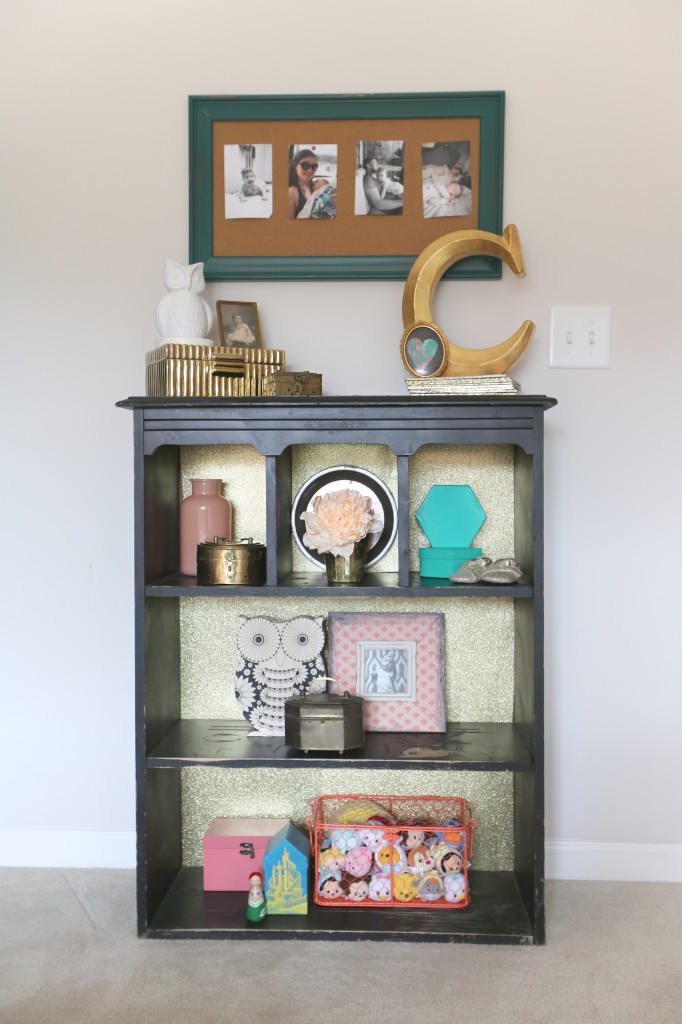 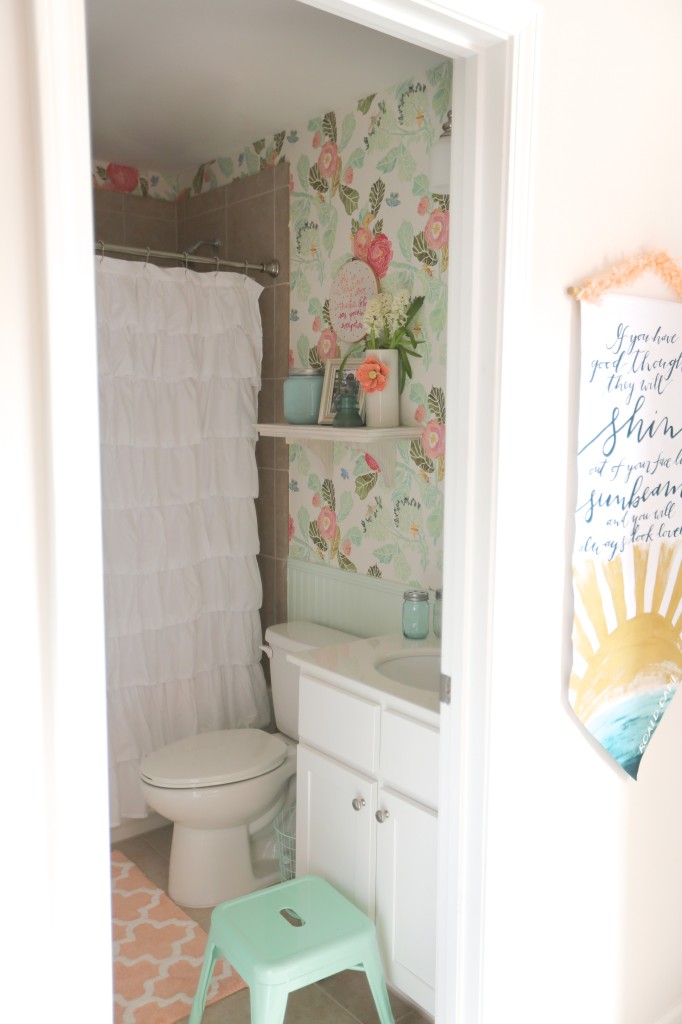 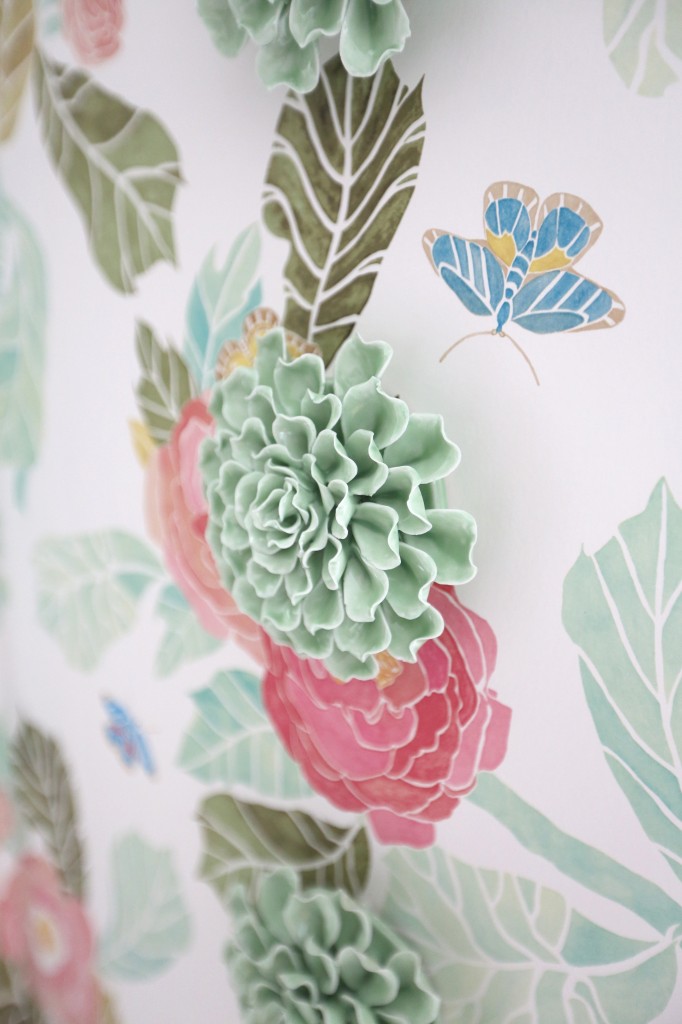 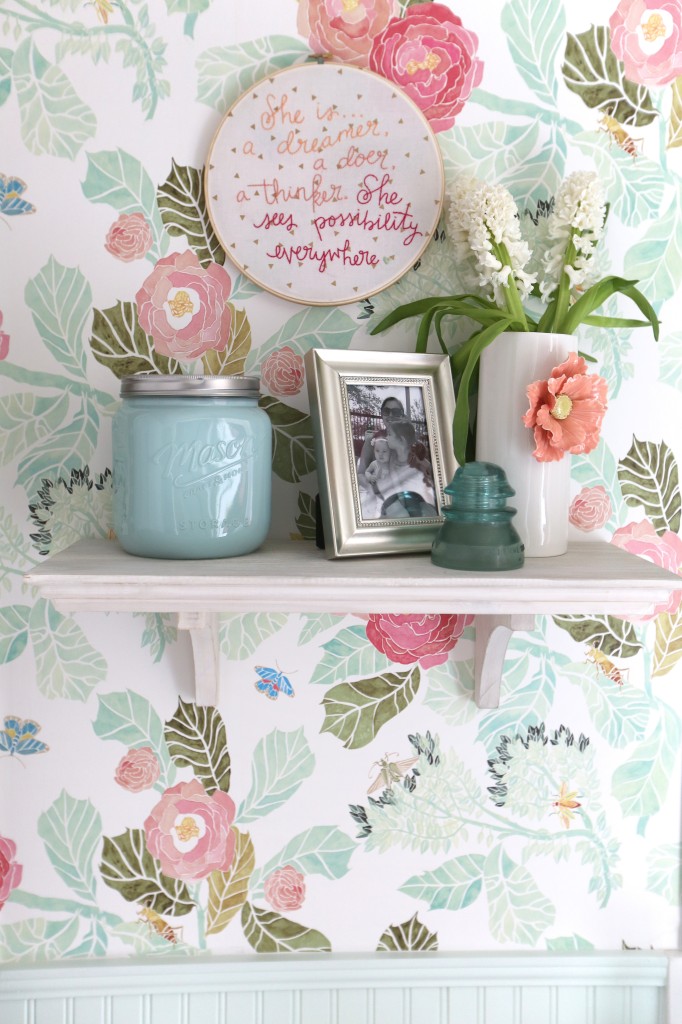