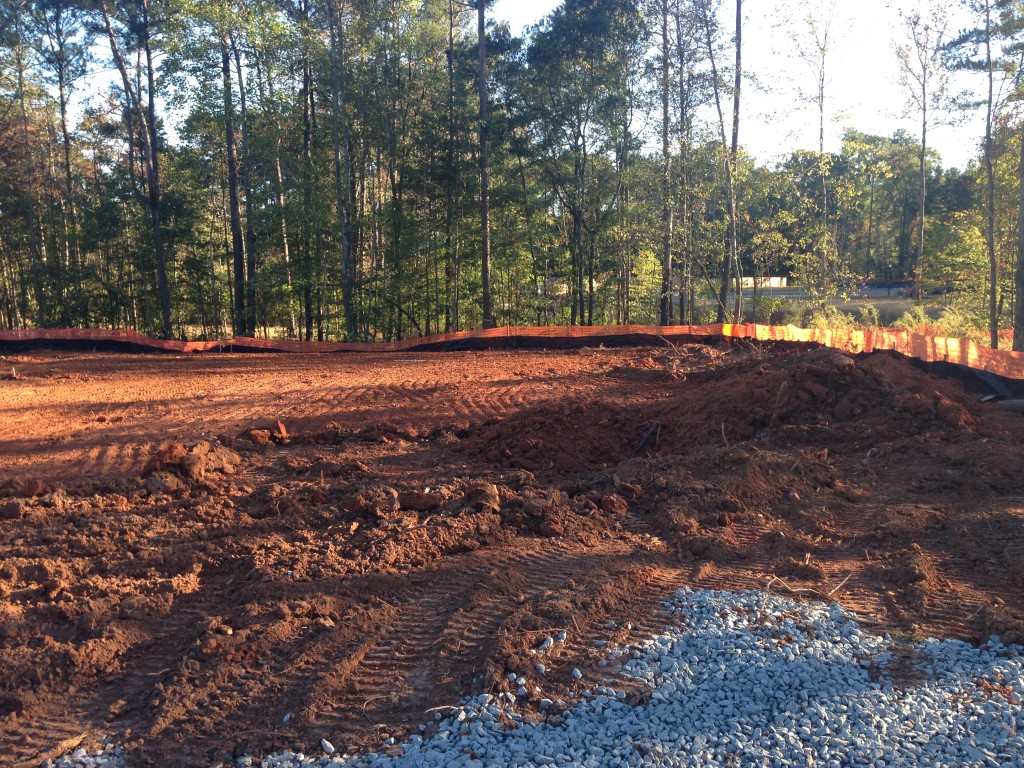 I haven’t written a house update lately because we’ve been in the thick of it over the past few weeks. Yeesh.

On October 13th we had our PCC (Pre-Construction Conference) with the on-site builder to go over all our house’s details and plan changes (and, yes, there were a lot of customizations we made because, well, we’re those crazy OCD people that builders hate). The guy was really nice and super competent, and we’re very excited to have him in charge of our construction. (Confidence in your on-site guy is a must, right??) However, as we began walking the actual lot, we had a major issue to start the meeting with — the backyard.

In the official plat, there’s a section marked “Tree Save Area,” then a big, blank spot that we assumed was our grassy backyard, then the house. For the PCC, the Tree Save Area was already marked off with silk fencing, and as we walked the lot, it was clear that there was 10-15 feet of what should have been grassy area left as trees. Although our lot is almost 3/4 of an acre, the backyard was only plotted out to be around 20 feet wide (What?!?), which was NOT what we thought we were buying. When we pointed it out, the builder tried to explain that the plat wasn’t showing the actual tree line, just the city-mandated Tree Save Area — which is possibly understandable except that we had never seen or signed off on anything other than the plat, which looked like we had a big ol’ backyard. In fact, since our first-choice lot was taken in the lottery before we had a chance to nab it, we had consoled ourselves with the fact that (based on the plat) our backyard was way bigger on the lot we ended up purchasing. Needless to say, we were very unhappy with this news. And so began the arguing.

Initially, the builder offered to pass along the cost (without mark-up) to us to have the “additional” yard cleared. It was a nominal fee in light of the cost of building a house, but Ryan was infuriated. (I was upset, too, but this was the last straw for Ryan.) I composed a kind but firm email to them telling them that we would not pay the fee but expected to have the size yard that was shown on the plat. They said, in essence, “No way.” And thus the back and forth began. Ugh.

The area of yard they were trying to get out of clearing is a bit more complicated (sloped with big ol’ trees) which seems to us the reason for the discrepancy, but I think that the builder didn’t truly believe he owed us that extra backyard space — meaning that in their minds, they believed they were right. HOWEVER, we were never ever shown anything other than the rendering with the big backyard, and so I also believe that we were right. It was a tense situation, and it took a week of emails and phone calls and poking and prodding — and at the end of it all, the builder gave us a resounding, “NO!”  I was at my wit’s end: With two little wildlings and two dogs in our family, I wanted, nee needed, that extra yard, but Ryan didn’t want to pay the fee and the builder didn’t either. I probably would’ve caved, but this was the hill (or, rather, the Tree Save Area) that Ryan Shove was willing to die on. He had paid his last premium.

So we asked our agent/friend to get involved. We had received no after no, and it took a stern talking to from him in order for their agent to offer us one last chance for a final-final answer. Our agent drafted a killer email, and we held our breath while our objection was discussed with the owner of the company. The result?

Ryan didn’t have to die on that hill (or pay a fee) and we got our “additional” grassy area. Whew.

We received a response that went something to the effect of: “As a one-time concession for our valued customer blahblahblah…” WE HAD WON THE BATTLE! Of course it shouldn’t have even been an issue in the first place, but, oh well. We’ll take the feeling of victory and run with it. ;)

The next day our lot was cleared and graded and thankgoodness we had fought for that extra area. The final tree line is lower than our foundation, so our backyard is flat until you head toward the end of the grassy area, where it has a necessary slope to meet up with the natural tree line. Of course I’d love to have a 100% flat backyard, but I do love our Tree Save Area very much and know that E.V. and Cricket will have lots of fun exploring back there. :)

So that’s where we are! Our lot is cleared and graded, the foundation is laid out and was set to be poured today. However, it’s raining in Alpharetta, so when we drove past the site today, there were no signs of cement. I’m assuming that they’ll push back the pouring until it’s sunny out. By the start of next week we should be in business!

On a separate note, seeing the foundation marked out was so scary! We’ve walked through our floor plan being built elsewhere, so we have a good feel for its size, but it looks so much smaller before it’s all up. Yikes! (And, yes, of course OCD Talie called the builder to double check that the foundation was sized correctly. I think they’re going to hate me by the time we close on this house, hahaha!)

Next, on to the Design Center…and the FUN stuff! ;)