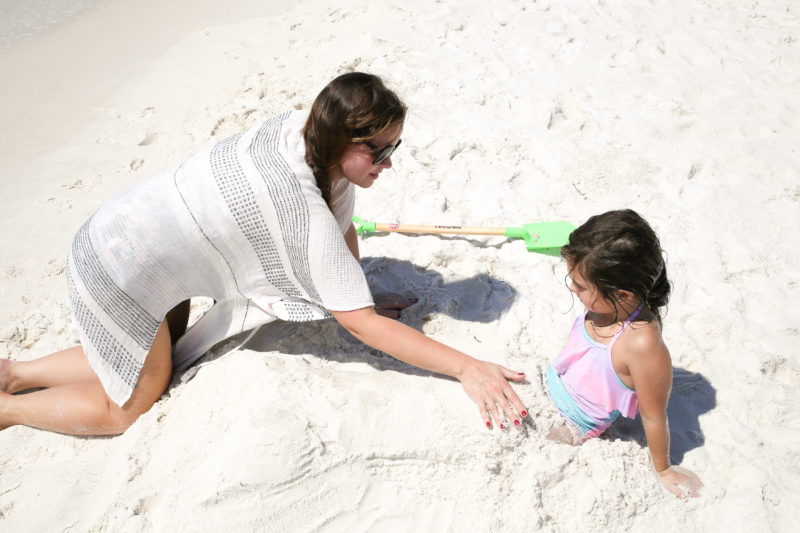 Friday we drove through Panama City on the way to our rental house a few beaches down. It had been a long day already, starting at 4:30 a.m., and although we should’ve just gone straight to our rental house, the excitement of seeing the ocean ASAP pulled us nearer to the beach earlier than we had planned. It was great, watching the warm orange glow of the sunset on the water as we cruised through Panama City, but then the most unexpected thing happened: I saw the hotel my family had stayed at over three decades ago.

I know you’re probably doubtful. (I mean, how can someone remember a specific hotel from when they were six?) But, you see, my family never went on vacations growing up. (And I really mean never.) In fact, I have recollection of exactly one time (I was young, maybe in first grade?) that we trekked down to the beach, and it was mostly because my dad’s aunt owned a hotel (or something like that) and offered a room for us to stay.

It was great — a beach vacation we could drive to? What an adventure! (Especially for a family that doesn’t do that sort of thing.) The one catch was that because we were staying for free, we had to switch rooms halfway through our trip. No big deal! So we schlepp a couple suitcases down the hall one day. Totally worth a free beach vacation!  However, there was some sort of miscommunication and we didn’t realize what time we had to be out of our room on the day of the switch. So my family walked into our room with sandy feet and sunburned shoulders to find maids clearing out our room. Whoops. We scrambled to gather up our belongings and lugged them down the hall. It took us a while to get situated since our exit had been so hurried and disorganized, but a few hours later we started realizing that we didn’t have all our things. Most of the missing items were no big deal — a bathing suit here, a bottle of hairspray there.

And then I realized Ginger was gone.

Every kid has something — a blanket, a stuffed animal, a toy — that is The One. Ginger was mine. She was this stuffed dog. A light brown cocker spaniel to be exact. And Ginger had been through a lot. My dog had progressively chewed her face off (a plastic eye gone, a nibbled nose, the other eye eaten, a chewed ear…you get the idea) and each time I found poor Ginger in the paws of the enemy, I had cleaned her up, sewed her up, and one time even made a tincture of baby powder and blush and water to cover up her wounds. And then there was the time I trimmed her fur, thinking it was time for a new ‘do. Needless to say, I loved that dang stuffed animal, and when I realized she was missing, my heart sank.

I remember only a few things from that trip — building a particular sand castle, walking back to the hotel from the beach one evening, a ride in the elevator, the way the hotel bathroom looked…but the thing I remember most distinctly is that after Ginger was discovered missing, my mom promised to “buy me a new one” and I told her not to even bother. How do you replace a friend? You can’t. I remember the depth of my sorrow as I sat out on the balcony of our hotel room, staring at the setting sun, feeling true loss for the first time. It’s the strangest memory — to know the exact moment you first felt something so inherently mature. It’s like being able to pinpoint the moment you began to lose your youth and innocence.

I stayed on that balcony alone all evening. I remember being slumped over in a chair, trying to wrap my immature mind around the idea that Ginger was gone. Like, truly gone.

And then, somewhere mid-mope, my mom threw open the sliding glass door…with Ginger in her hands.

She had seen my suffering and did what any mother would: She set out to lift me up out of my own mire. As I sat out on the balcony, she called the front desk to rifle through Lost and Found (nada), and then the maid service, and then the General Manager. The maids who had cleaned out our room were already done for the day, but the manager agreed to let my mom come sift through the maids’ carts. Nothing. The maids had taken out their trash before leaving and thrown it into the dumpsters out back.

At this point, let me be clear that this was no duplex or 10-room motel. This was a hotel. Like, thirty floors and hundreds of rooms with a constant revolving door of guests. That dumpster was full. Full of everything (yuck) and lots of it. But my mom loved me and was willing to do anything to ease my pain. And I mean anything.

So she hoisted herself up into that giant dumpster, jumped right in, and began ripping open other people’s disgusting vacation trash, sifting through the worst of the worst in a last ditch effort to find Ginger. And somewhere about halfway down, she found her!

That moment on the balcony was perhaps the happiest memory I have of my mom — a triumphant grin, the joy of knowing she fixed my broken heart beaming from her face, the pride with which she recounted her trials and tribulations. She had rescued Ginger that day, and in a way she had rescued my six-year-old self, too. She had rescued me from facing the world too early, from having to wade through the harsh reality of loss and permanence too soon. She literally and figuratively handed me back my childhood, if only for just a little bit longer.

And now it’s been two years today since she died. And, to be quite honest, my mom left a lot of messed up, tangled things behind that I’m still not done unweaving. At times I’m angry with her, or sad that she’s gone, or frustrated that things ended how and when they did, or regretful that I’ve discovered so much about her post mortem that she never shared with me. It’s been a rough go, but being at the beach today, seeing that hotel thirty years later and remembering that overwhelming emotion she and I felt together the day she rescued Ginger was perfect.

I want to remember my mom exactly like she was that day — happy and full of life. And hope that my girls remember me just like that, too.