Today was Emma Vance’s first day going to preschool alone. Fearing a tearful goodbye, I walked in, washed her hands, gave her to the teacher and walked right out. I’m not going to lie, I was immediately so dang curious about how she handled the drop off! I believe kids should have a safe, reasonable amount of freedom and independence (no helicopter mom-ing here), but even I couldn’t help but wonder if she was handling it okay.

Despite my burning curiosity, I was bound and determined to put my few hours to good use, so I hunkered down at a local restaurant,  got some breakfast and signed on to my laptop. Overall, I have to say that time flew by and that it was perhaps the quietest, most productive morning I’ve had since E.V. was born. I mean, people–things actually got marked off my to-do list! Hallelujah!

However, I must admit my mind did wander every now and then. What in the world is she up to at school? Is she crying? Did she poop? Are they eager to get rid of her because she’s the class terror? Thankfully another mom happened to get a chance to check in while the class was on the playground and (graciously) texted me. Apparently the mom’s daughter and another kid had a brief squabble about a piece of playground equipment, and E.V. ran to intervene and check on everyone. (Ryan Shove’s social and caring child, clearly.) Strangely, Oscar does the same thing at the dog park: He doesn’t want to actually be in the dog fight, but he always runs over to hover while it’s happening. Ryan and I have deemed this “refereeing,” and obviously she must’ve picked it up from him. :)

That little text-story put me at ease and allowed me to get my work done. When my freedom was over and I returned to school, the teachers said that Emma Vance was a delight, that she didn’t cry at all, and that she climbed on everything. (No surprise there, since getting on and off the couch is her current favorite hobby.) They also mentioned that the sandbox was her favorite activity, which also came as no surprise since the Russians next door have a sandbox where she likes to play Baby Godzilla, smashing their sandcastles to smithereens and then laughing about it. One teacher chuckled as she told me how E.V. actually laid down in the sand. (Practicing her snowangels for the winter, duh.) As I took off her shoes in the car, sand poured out in comical amounts, and I knew I’d be finding sand everywhere for the rest of the day. And I was right. In fact, as she snoozed this afternoon, I looked at her exhausted, little flushed body and couldn’t help but be happy: a booger in her nose, scrapes on her arms, bruises on her knees and sand in her ears. (Yup, in her ears.) I suppose that’s a sign that she had a pretty good day, huh? :) 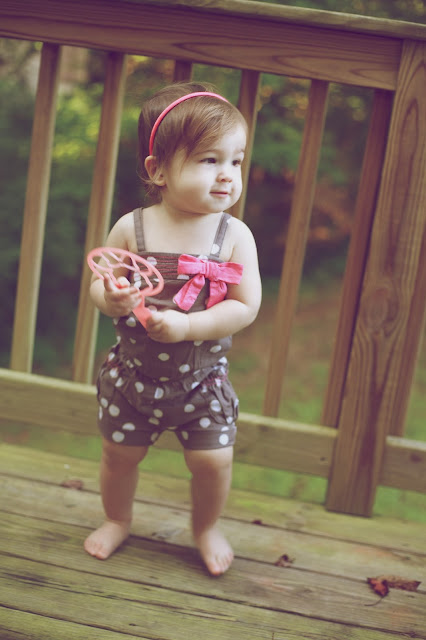