Sorry to be so absent lately! We’ve been running around like crazy people over the past couple of weeks, and now that life is back to normal, I’m feeling a little overwhelmed at catching everyone up on what we’ve been doing. So let’s start with today…

We’ve been visiting friends in D.C. for the past week (LOTS to come on that as soon as I can sift through the bajillion pictures I took), and when we arrived home to a straightened-yet-unclean house, it was back to reality. Where to start? I figured since yesterday was a travel day that it meant that it still counted as a vacation day, so we ignored our empty fridge, dirty floors and disorganized lives and opted for one last indulgent meal out. This morning, however, it was time to hit the grocery store, which felt odd to do mid-week since we’re Sunday shoppers, and perhaps because we were out of our routine to begin with, it turned out to be a very educational trip.

I’m not sure how I’ve managed to miss these car-carts so far in my baby’s childhood, but one was parked next to our spot as we pulled into Whole Foods this morning. E.V.’s eyes were as big as saucers when she saw the car-cart, so how could I deny her? It was perhaps the happiest moment of her life–or at least the happiest grocery trip of her life–and meant that I had an entertained child and extra time to peruse. Seriously, how did I not realize Whole Foods has these awesome car-carts? They’re a life saver when you need some time to concentrate on shopping, and I will use them from now on without fail. You should, too. :) Now I know. Now you know!

This extra time allowed me to corner the manager of the produce section to ask a burning question about produce freshness, which turned into a 15 minute conversation. A very informative 15 minute conversation. This might be a “no duh” thing to everyone else, but did you know that all produce (besides tomatoes, potatoes and onions) should be kept in the fridge??? I had no clue. I told the manager that my rule of thumb was that I stored fruit and veggies however the store did: If they had lettuce cold, I put it in the fridge; if they had avocados warm, I left them out. Wrong. It turns out that if your fridge (according to the manager) is at 41 degrees the ethylene gas (which makes produce ripen and then rot) production slows and even halts. When the store gets produce, it’s very unripe, so they let a majority of fruits and veggies warm up in order to ripen for purchase. However, unless you want to use the produce immediately, you should refrigerate it until a day or two before use, which is handy if you only shop once a week like me and end up with rotten produce by Day Five. Who knew! I NEVER would have put avocados in the fridge for fear of them turning brown. I mentioned to him that I just put most of my stuff in a bowl on the counter, and he was aghast. Apparently that’s the absolute WORST thing to do because it increases the heat and traps the gas. Oops. It was an eye opening talk, and I just had to share in case anyone else is a produce-dummy like myself. :) Now I know. Now you know!

Also, I learned that sugarplums are a real thing today! I assumed they were some long-outdated-and-forgotten sweet from the past whose memory was only alive in ‘Twas the Night Before Christmas, but it’s a real fruit! I was so bewildered that I bought a package. Turns out they taste like regular plums; they’re just lighter in color and smaller. Oh, well. It was a fun discovery. Now I know. Now you know!

Now that life’s back to normal, there will be more posts coming up to recap the past couple of weeks, so bare with me as I relive the past month. :) 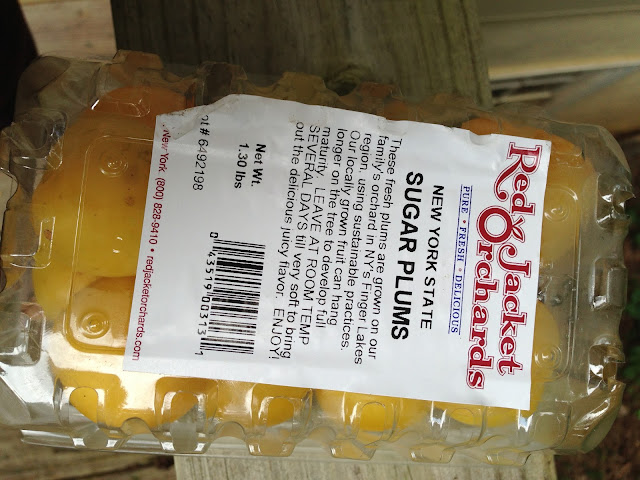