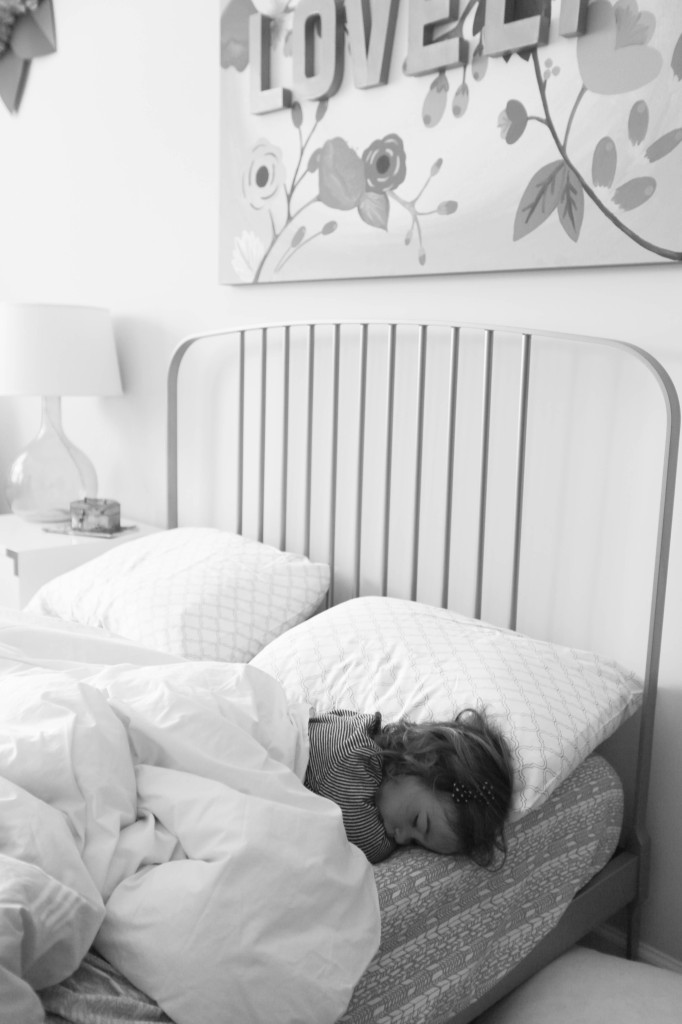 The girls have to be herded back into bed.

There’s the hurried, dull pitter patter of footie-pajamaed feet as they run back up the stairs.

Thud thud. Both girls are back in bed.

I climb the stairs slowly myself, soaking in the giggles and rustlings in Cricket’s room. I can’t believe we’re already here. Emma Vance was over three when we transitioned her out of her crib, and Cricket’s not even two yet. The second ones always go faster. (I know, I know.) Over the past few months Cricket’s been miserable in her crib, crying every time we put her in it. She’s been begging to sleep in a big girl bed and has spent many nap times this winter usurping E.V.’s room. She’s been growing up so fast (too fast) in general. She refuses to poop in her diaper, but I’m not ready to potty train yet. In a momentary lapse of sanity fueled by motherly pride and encouragement, I mentioned to Cricket a few weeks ago that if she poopied on the potty five times that she could have a big girl bed…and then immediately regretted saying it. She’ll forget about that slip. But she didn’t. Now she cries for the potty, “I have to poop!” and says every time that she is done, “Now I get my big girl bed?”

So I keep my promise.

At the top of the stairs, I creak the door open. By now both both girls are singing “Hush Little Baby” much louder than necessary, and so I slip into Cricket’s room and bed in hopes of calming them down. Emma Vance knows the drill, so she rolls over as I shush them and is asleep within moments. She’s so happy to be sleeping with her sister, a side effect that I didn’t expect. A side effect that melts me just a little bit. Well, a lot actually.

Cricket’s still antsy, so she’s babbling on about Rainbow Brite and Strawberry Shortcake, about how E.V. is asleep, and about how she’s going to throw up (she’s not). I’m just silent as she worms around the bed trying to get comfortable, enjoying a few moments of silence as she sips the last of her milk from her princess cup. I’m shocked that she hasn’t mentioned the bottle in the last 24 hours; I had expected tears and gnashing of teeth. The girls were away while Cricket’s big girl bed was being delivered, and so when we got home, I told the girls that we could do some magic.

“While you guys were gone I met with the Baba Fairy! She told me that if Cricket wants to give up her babas, we can put them in this bag, say a magic spell, and she’ll leave us a big present!”

They were all in, throwing the last two bottles we own into a plastic bag, eager to say the spell — which I didn’t think of in advance.

Waving our hands over the bag, chanting like little crazy people, the girls’ eyes grew wide.

We ran all over the house, and when we got to Cricket’s room, the Baba Fairy’s magic was evident. The girls were giddy as I watched them jump around the bed like monkeys.

I can’t believe in one fail swoop we totally left the baby stage behind us. In less than 24 hours we became a crib-less, bottle-less family, and I have such obvious and mixed emotions about it all. I’m not ready, but Cricket is, and that’s the worst, most complicated part of it all. I had thought I’d leave Cricket’s crib assembled in her room for a while as a means of slowly transitioning her, but once the bed was in place, it was obvious that the crib didn’t have a home anymore. So I dismantled it without much thought. I was fine: I had made the decision that it was time for the big girl bed; I had ordered it; I had put it together; I knew the crib had to go. I can’t believe how mature I’m being through this, I thought to myself. But once the bed was in place and the crib was gone, it was also obvious that the rocking chair’s ottoman didn’t fit in the space either, so I decided on a whim to move it. I originally purchased the piece for Emma Vance’s nursery but had since covered it to use in Cricket’s room, and it was time to put it back where it belonged.

I found it easy to remove the outer upholstery, but at the sight of the long-forgotten yellow fabric underneath, I lost it. Thoughts and memories of going from a family of two to a family of three (and then four), of the hours spent in that rocking chair nursing and soothing fussy infants, of the care and excitement that went into creating those nurseries for unknown babies, came flooding back to me. That mustard linen caught me off guard, and I began to sob. It’s really over. No more babies in the house. No more late night nursing, no more cheering on a new crawler, no more tiny fingers or toes. It’s over.

It was as if I had accidentally ushered in a new phase of life without thinking of the consequences. Not that keeping Cricket in a crib longer would’ve kept her from growing up, but it would’ve at least let me think of her as a baby for longer. (Denial is a strong coping mechanism in mothering; it keeps us from constantly and sporadically breaking down.)

And then, in the middle of such thoughts, Cricket wiggled her way over to me, onto me. Belly to belly, it was the most newborn thing she could’ve done. I tried to keep it together. Her little face nudged its way up, finally resting on mine. Her cheeks were hot and her breath was on my neck. Her tiny fingers scratched around as she settled in; her breathing slowed. I could feel my face flush and my heart pound in my chest as I listened to and felt the quiet thump-thump, thump-thump of her heartbeat so close to me. In the dark stillness of the night, as I lamented about the loss of Cricket’s innocence and infancy, there she was, my baby again — totally vulnerable, dependent, needy. In that moment, I felt the same weight upon my chest that I felt nearly two years ago in that hospital. For the second time in 24 hours, I was a wreck.

I gently rolled my littlest over, moving her slowly onto to her big girl bed, and slipped out the door. And then, half a step into the hallway, I turned around and ducked back into the dark room. I grabbed the foam bumper that had fallen on the floor and wriggled it carefully onto the edge of the mattress next to Cricket to keep her from rolling out of the bed in the middle of the night; she is, after all, not that big quite yet. Thankfully. 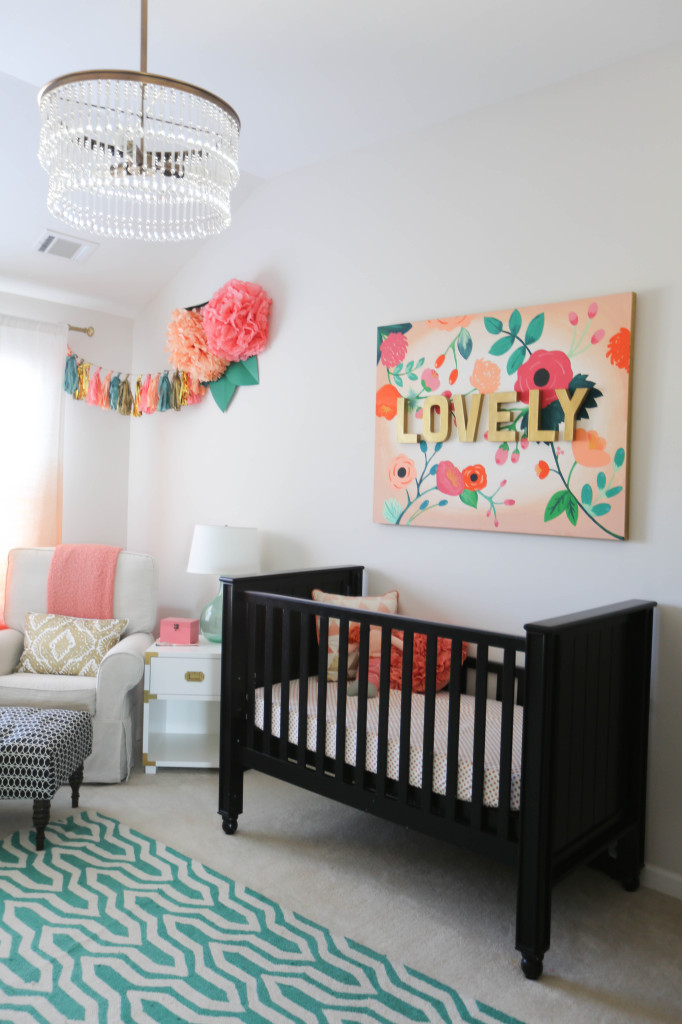 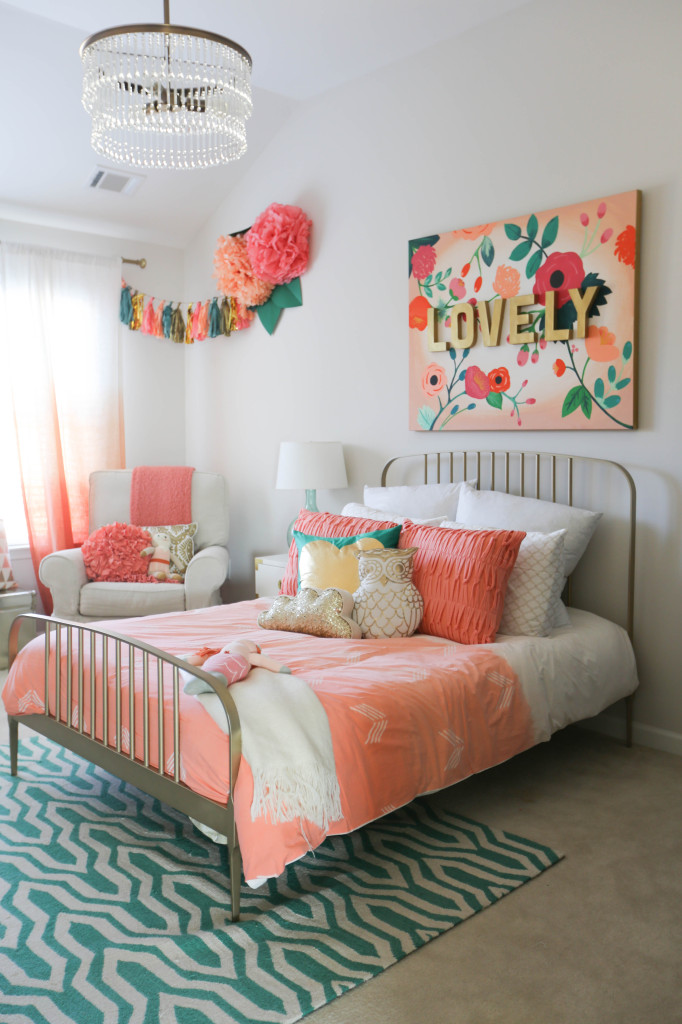 (Actually, I had originally thought to keep the black accents from her nursery in her big girl room, but after styling the bed a bit, I ditched them. Thoughts? Oh, and the euro sham covers aren’t here quite yet, but they’re white.) 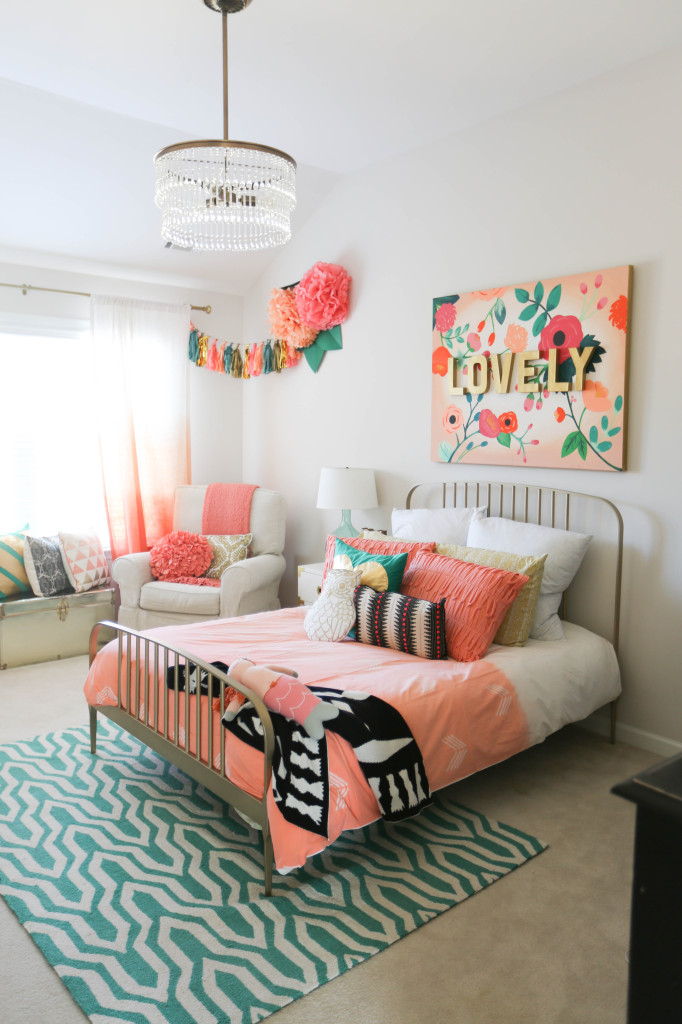 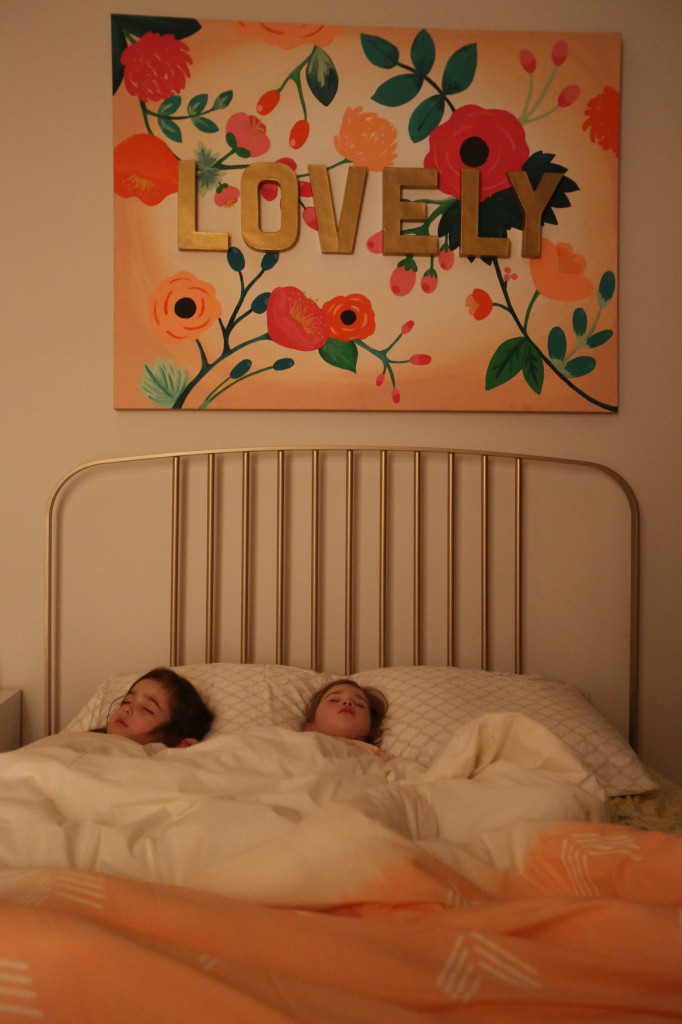 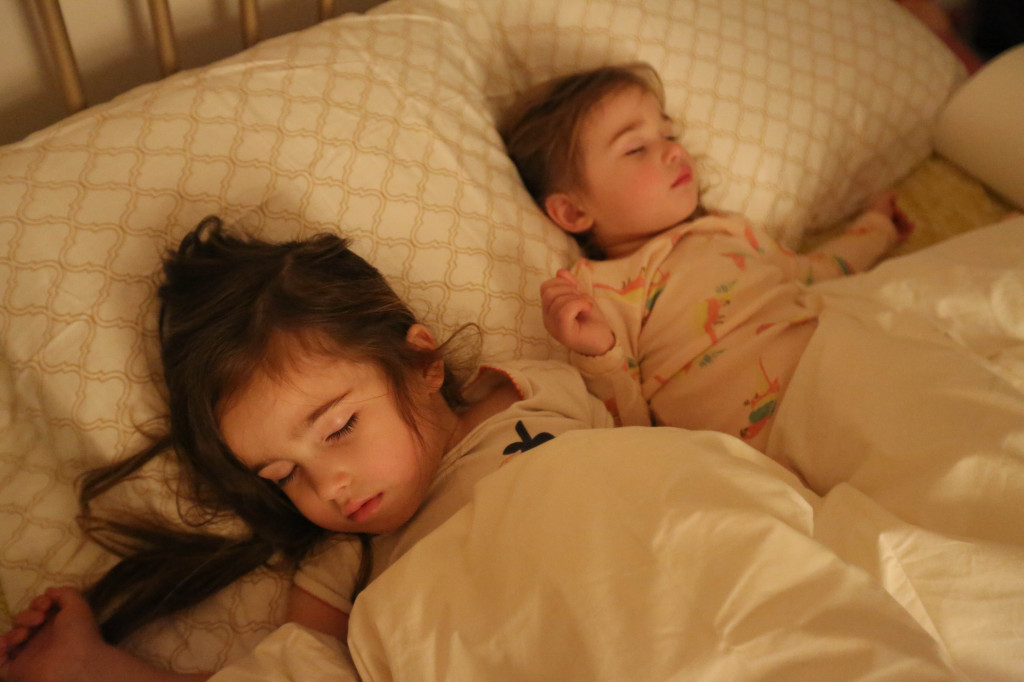