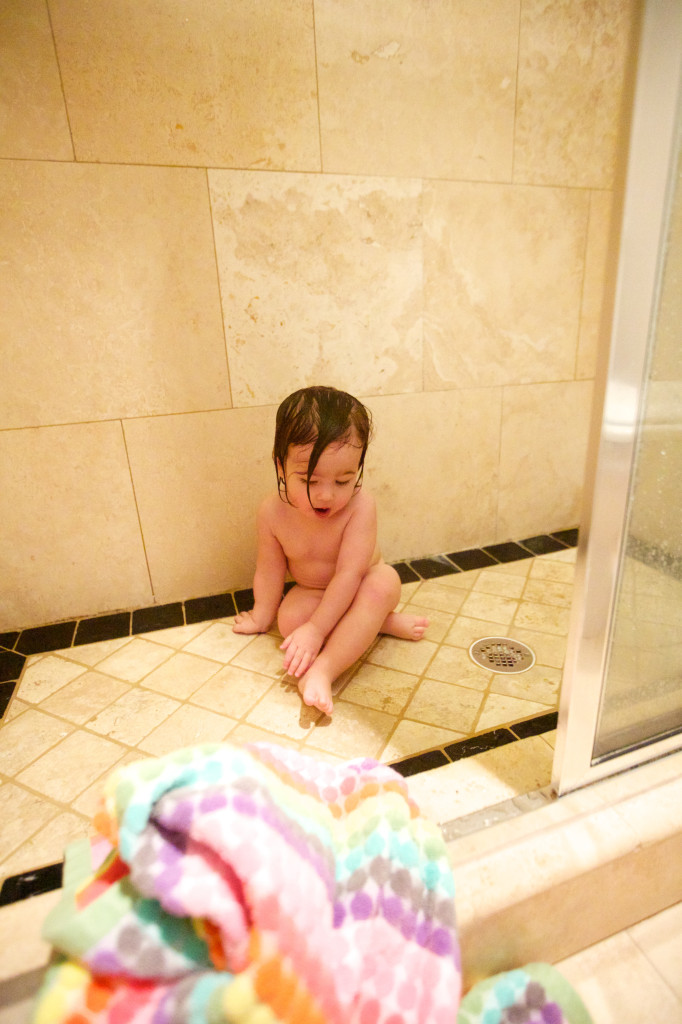 Oh, 2014! What do you have in store for us? I’ve started off the past few years feeling relatively certain of what the coming days held for us. This year, however, I’m feeling a bit blind.

Here’s what I’m confident of for 2014: We’ll be adding Baby #2 to our family. That’s about all of the certainty that I have for the coming days. Other than that…well, I just don’t know. We’d love to find a house to buy (sooner rather than later, please!), grow our businesses, acclimate our family of three to being four, have optimal health (and lose baby weight!) and…um…other stuff?

Over the past month, as I’ve prepped for January 1st, I’ve been contemplating this gnawing sense of uncertainty. If I don’t know what concrete things I can accomplish this year, then how can I plan for 2014? In light of this lack of my usual annual laundry list of to-dos, I’ve resolved to forego my internal urge to plan the future and instead theme my “resolutions” around a singular idea: Cleansing.

Although I’m not certain what this post will look like next year at this time, what I do know is NOW. Instead of compiling a list of what I’d like to accomplish in the future, I’ve been thinking about what would would make my life better in the immediate sense. In fact, I’ve been doing a lot of thinking about it. In evaluating all of the categories that take up my time and brain space (house, finances, health, family, relationships, internal conversations, spiritual matters, down time, etc.), I’ve come to realize that I desperately need a cleansing in every area, whether it’s purging old junk from our basement,  resisting negative people’s influence or simply recycling. So, in 2014, I’ll be taking on these different categories, one per month or so, and working toward being a bit more whole come 2015.

To start the year off right, I’m taking on cleaning out our “stuff” in January. I’ve already started a bit here and there in December in order to give myself a boost (especially since I’ve also got to work on the nursery this month as well!), and God willing, come February 1st, we’ll be happily organized and PURGED of useless junk here at Amityville. I’m trying to be ruthless since I easily succumb to the I-might-use-it-one-day mentality, but with hopes of a new home in 2014 as my motivating factor, I’m reminding myself that I can always get another one if I need it. Challenges to January’s goal include an attention-demanding toddler, an aching back and easily-pulled muscles, a traveling husband, not being able to purge Ryan’s stuff without his approval ;) and cold weather (the basement and garage are freezing!). However, I CAN DO THIS. And, more importantly, I will do this.

By now I know you’re like, “Seriously, Talie, what the heck do these pictures have to do with this post already???” Whenever I get on a wild hare like this, I’m always conscious of how I can positively influence Emma Vance with whatever’s on my mind. Last year we set some little goals for our six-month old (like eating solid foods :) ), and so to kick off the new year right, we decided to challenge E.V. (and ourselves) with a mini-resolution of a week with no television. In a sense, it serves to bolster my personal theme of cleansing: I’m not against kids watching TV (heck, I sure watched it growing up), but for us it’s a slippery slope. Emma Vance becomes a total zombie whenever Tinkerbell or Elmo is on, and so we’ve come to rely on it if we need a few toddler-free moments to accomplish our grown-up goals. I’ve been mentally prepping to bring Baby #2 into our routine, and I have to admit that I’m terrified that television will become a big part of controlling the chaos when Ryan’s traveling. In order to kind of “reset” our attitude and dependence on Sesame Street, we’re taking a week off of TV to prove to ourselves that we can do it. And we can — although even on Day Two it’s left us trying to capture E.V.’s attention creatively. Hence the shower…

Emma Vance is a total water baby, obsessed with any form of water. Usually I’d let her watch Elmo while I get ready, but without TV to babysit her, I’ve resorted to letting her jump in the shower with me. (I have never seen her so excited!) It takes up some time, is extremely entertaining to her, keeps her out of trouble and allows me to actually take a shower (which otherwise might not happen). Not a bad deal! Today, however, she refused to get out once it was over, so I let her dance and explore and sing in the cold, wet shower for as long as she wanted. I kept asking if she was done and she’d exclaim with a grin, “No all done! No all done!” over and over, so I figured at least she was happy. :) Overall, from start to finish, she was in the shower for almost an hour before she finally called it quits. An hour. A glorious, happily-occupied-toddler hour! And she wasn’t watching a Tinkerbell movie! Success!

There have already been a few more, um, creative activities we’ve been using to keep E.V. entertained over the past 48 hours, but the shower was by far the most successful time-killer yet. I’m proud that we’re doing something challenging and beneficial over this next week; it feels like we’re taking strides toward “cleansing” our schedule of too much television, and since purging the house is a goal that will take a whole month, this TV-free week is already giving me immediately goal-reaching satisfaction. Plus, I do have to admit that I get a kick out of my theme being “cleansing” and E.V.’s favorite TV-free activity being actual cleansing. 2014, meet Irony. Irony, 2014. :) 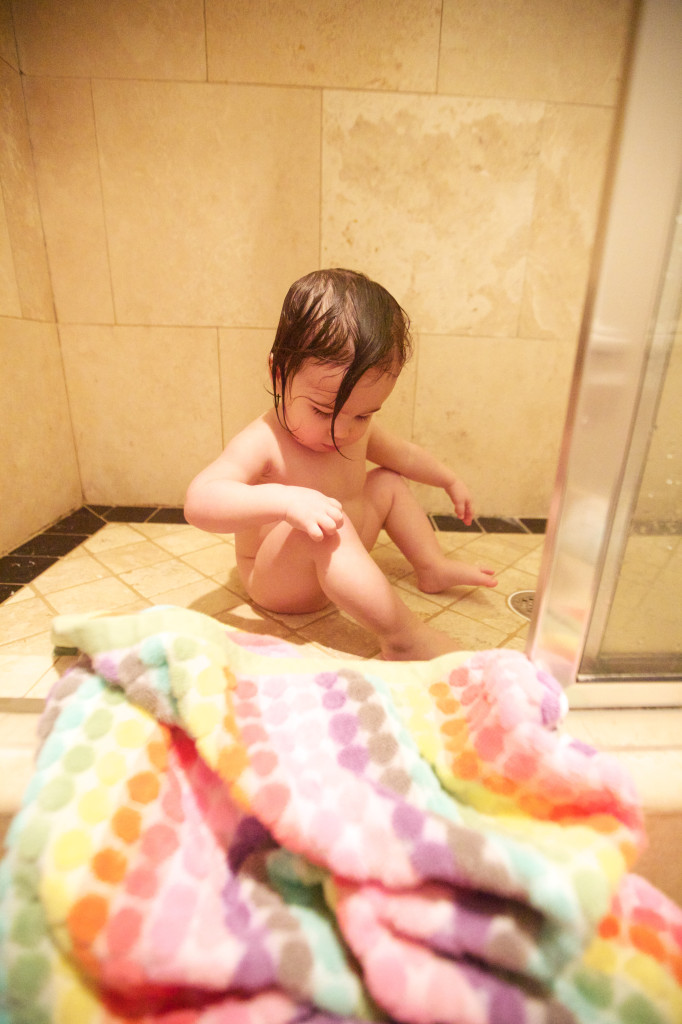 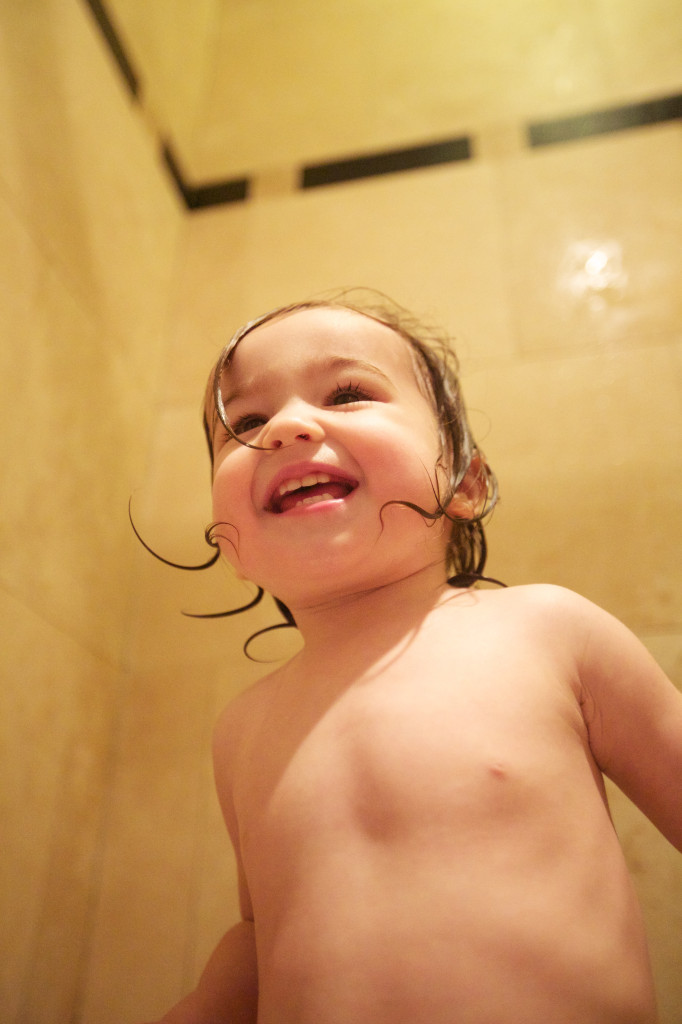 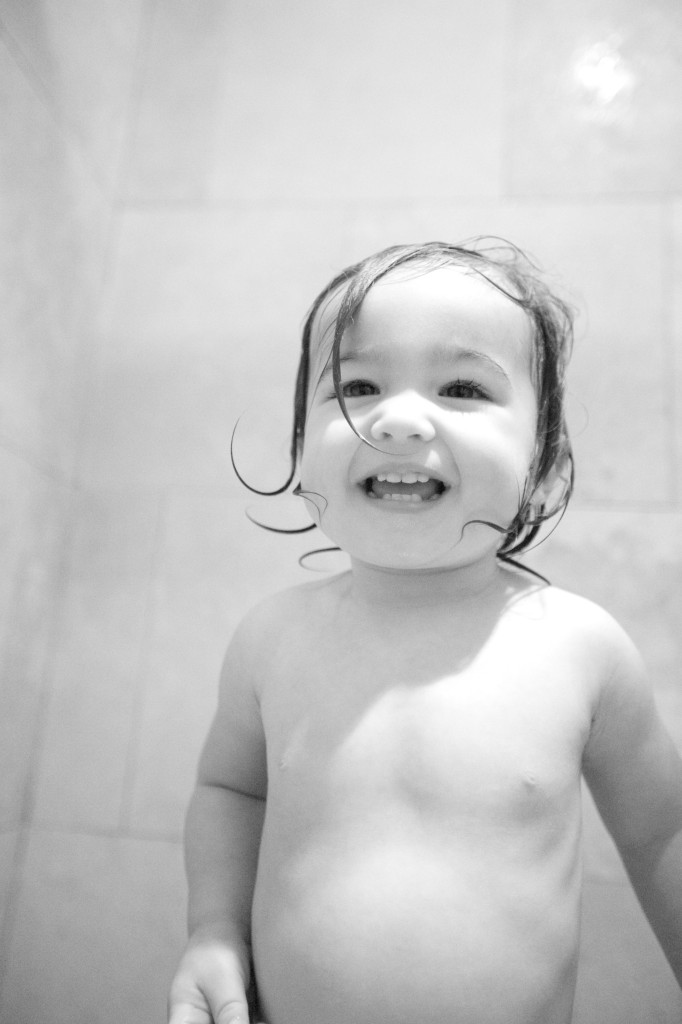