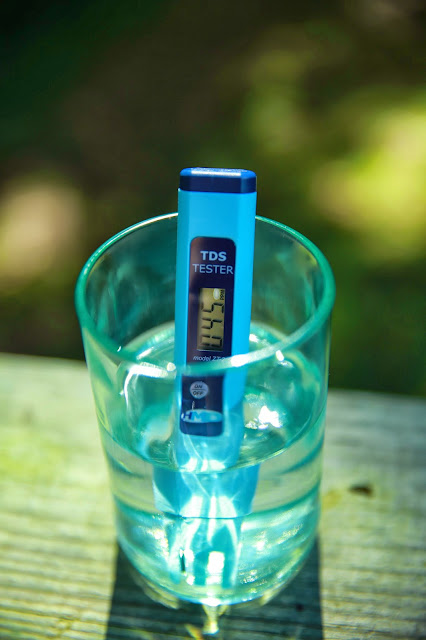 (That’s the phrase most of my mornings begin with.)

It’s been almost a full year (!) here in Amityville, and our little rental house’s quirks have become part of our daily life. Whether it’s the fickle air conditioning that makes our half bath unbearably cold while we sweat on the couch (which is only six feet away), the unmistakable funk of the 70s that always seems to be wafting in the air, or the variety of bugs (Oh, the bugs!) that visit us en mass daily, Amityville has a personality all to itself–to say the least. Truthfully, I’ve come to grips with the fact that we just have to deal with these quirks while we’re here, that no amount of Raid or air freshener will solve Amityville’s problems. One of the issues I’ve continued to worry about, though, has been the quality of the water coming into through our faucets.

We bought our last home from a builder in 2005, and because everything (including the pipes) was so “new,” I wasn’t picky about whether my water came straight through a tap or through the fridge filter. (I always reminded myself that what’s coming in through our taps here in the U.S. is a blessing and that people all over the world are forced to drink germy, dirty water for survival. Perspective helps.) Thus, at the ol’ townhouse, I never thought twice about getting a late night drink from the bathroom sink. However, the first thing I noticed when we moved to Amityville was that the water tasted, well, gross.

Crud. I thought that surely it meant the old, rusty 1970s pipes coming into our house were depositing all sorts of junk into our drinking water. Yuck! Scary! Even the fridge water tasted horrible, so I immediately called our landlord to ask him to change the filter on it. “The fridge doesn’t have a filter for the water,” he responded. Really? I didn’t even know that it was possible to have in-door water without a filter! What’s the point? So Ryan and I turned to alternative sources of water–mostly large 3-gallon containers from the grocery store. (On-faucet filters didn’t fit our awesomely old taps.) However, I’ve always felt uncomfortable drinking so much bottled water, so I’ve been researching other means for a while and recently committed to the Zero Water filtered pitcher.

The Zero Water pitcher comes with a device to measure the amount of JUNK in your water, which is part of the reason I chose it. The meter detects the amount of TDS (i.e. Total Dissolved Solids, which includes minerals, salts or metals) in your water, and I was super curious how Amityville’s water quality would rate. After I read their little pamphlet, I expected Amityville’s TDS to read in the 300s, since it came with a chart showing the average TDS readings per state, and Georgia’s was 100-200. I was convinced that the nasty taste of our water was detrimental to my health, that it was depositing rust and chemicals into my body at an alarming rate. Not so. I about fell out of my seat when the initial reading came back at 41! What?!? I did the test again. And again. And again. Every time it rates in the 40s! Sorry for being so judgmental, Amityville! My bad! Who’d a thunk it?

Of course, I’d already bought the pitcher, so we’ve been using it for a few weeks now. The filter produces water that reads at 0 TDS (which is even better than 40), so I’m happy with my purchase…and with the ability to oust all those bottles of water and fears of Amityville’s tap water. Yay! We’ll call it a win-win–one for Amityville’s water’s reputation and one for now having truly clean water. :)