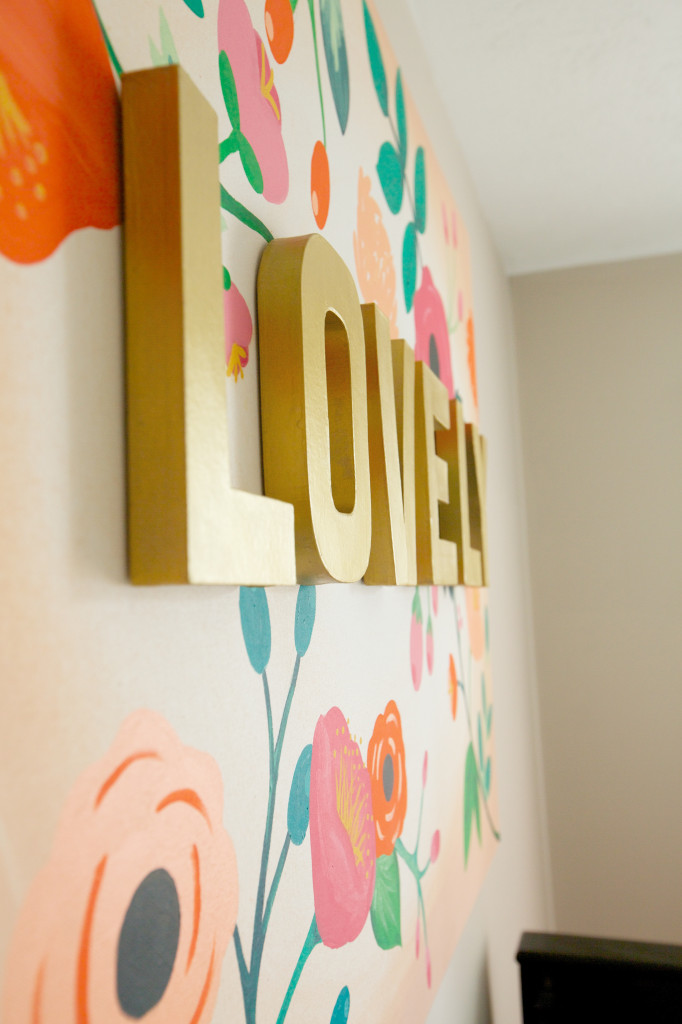 After years working with new mothers at Pottery Barn Kids, I know that a nursery that’s not done before the baby comes simply won’t get done — which isn’t a big deal to most people, but for me, having a completed space brings me peace and happiness. (Plus, especially with this being our second time around, it’s one of the few tasks to prepare for Baby #2 that isn’t simply a refresher course.) I love the idea of bringing home this sweet little girl to a space that’s distinctly her own, even if she won’t actually sleep there for a few months. And, if that wasn’t enough motivation, E.V. already knows that it’s “baby sister’s” room (and thus is intrigued and spends a lot of her free time exploring in the strange, new place).

Last time around, I really struggled with figuring out the best colors for Emma Vance’s nursery, and, wouldn’t you believe it, I had the same issue again! Talk about history repeating itself! With E.V., I had this awesome painterly paisley fabric in yellow and beige to make her bedding out of, which proved to be an issue. (It was beautiful–but bland.) Eventually I added aqua and chartreuse into the mix to brighten up the space. This time around, my “white elephant” was the crib — namely my black crib. When I worked at PBK (and had a killer discount), I purchased two cribs (a white “girl” one and a black “boy” one) at really, really great prices; Ryan thought I was insane at the time, but a few years later and he’s no longer looking at me like a crazy person! However, I never considered that I’d have two girls in cribs at the same time. Bah. In general, my style is NOT to use a lot of dark colors, especially in a little girl’s space. However, I wasn’t about to waste money on another crib, so I had to make it work. I was repurposing E.V.’s white changing table and pale beige rocker, but beyond that I had a blank canvas. Well, kind of blank. I had a few restrictions since we’re renting right now, like not changing the blue carpet (although I did end up literally laying neutral carpet over it) or painting the walls (which were to remain beige). Slowly the challenges were adding up, meaning I needed to make some decisions and get to work!

Since I went very anti-pink with E.V.’s nursery, I wanted to incorporate coral into Baby #2’s room simply to make sure the spaces were noticeably different. I started with coral, black and gold in mind, but I’m so NOT bold with my decorating style that it scared me! I considered adding mint to lighten up the design, but as I shopped, I started to fall in love with brighter colors…and then I found the rug. Oh, the rug! It was the first thing I fell in love with for the space, and from then on, emerald was in and mint was out. As things evolved, I added in peach, and the further along I got, the further I was freed of my usual, soft, vintage-y style. The result is something distinctly un-Talie-like, but to all of my friends who have been color-crazy since college, are you proud of me or what?!?

The only “new” furniture in the room is a nightstand (Threshold from Target on super sale) and a gold trunk ($15 from Goodwill). The rest we owned already, meaning that this nursery design was very budget-friendly. (You’re welcome, dear husband of mine.) A LOT of elements in the space are crafted or repurposed: I wanted something that felt young and feminine and bold for above the crib, so I painted a giant canvas (inspired by Anna Bond) to act as a focal point. Since we couldn’t paint the walls, it added a splash of color and brought my pallet into one piece. Emma Vance even added her own touch with some original finger paintings (on the gallery wall above the changing table and cut up in a few small frames around the room). I had tissue tassels leftover from Emma Vance’s gender reveal (from March 2012!), which I mixed in with a few new ones to bring color to the closet along with leftover tissue paper flowers from Emma Vance’s baby shower and monthly pictures (talk about repurposing!). We had gold gallery frames in our master bedroom in our last house which gained new life in this nursery. The ottoman is recovered from E.V.’s room; the black bookshelf belonged to Ryan in college; the lamp was a super-buy from the Pottery Barn outlet years ago that finally found a home; and, well, the rest is mostly just accessories unearthed from boxes in the basement!

This design really stretched me out of my comfort zone, and I’m so happy with the result. It helped me prove to myself that restrictions can be blessings if you embrace the challenges with an open mind. Now we can all just pray that Baby #2’s personality matches her nursery–bright, sunny, and full of fun! 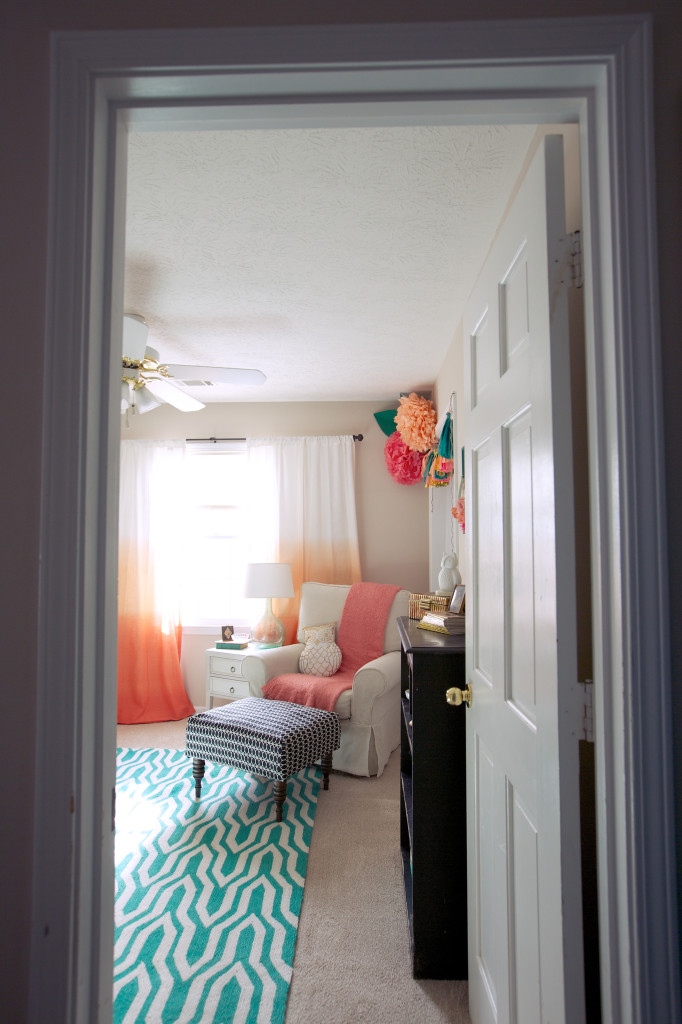 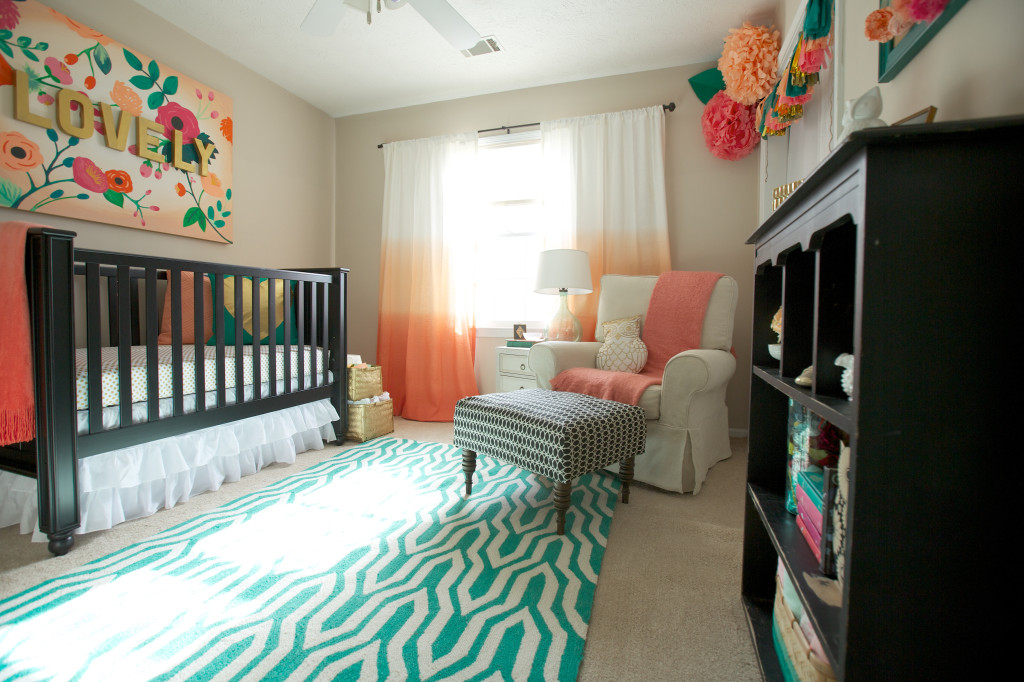 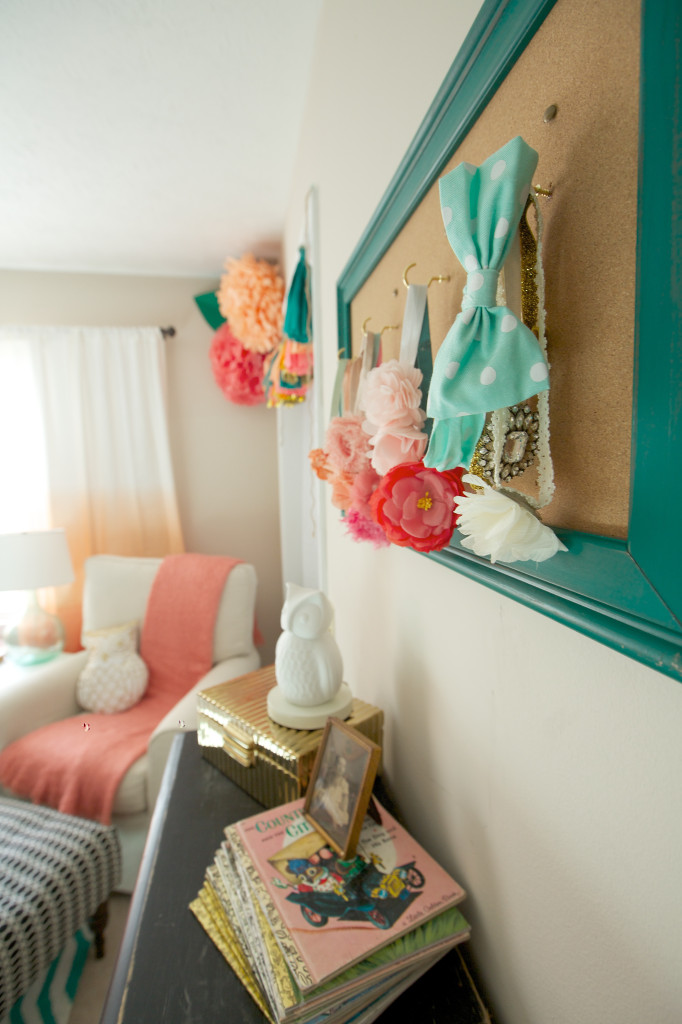 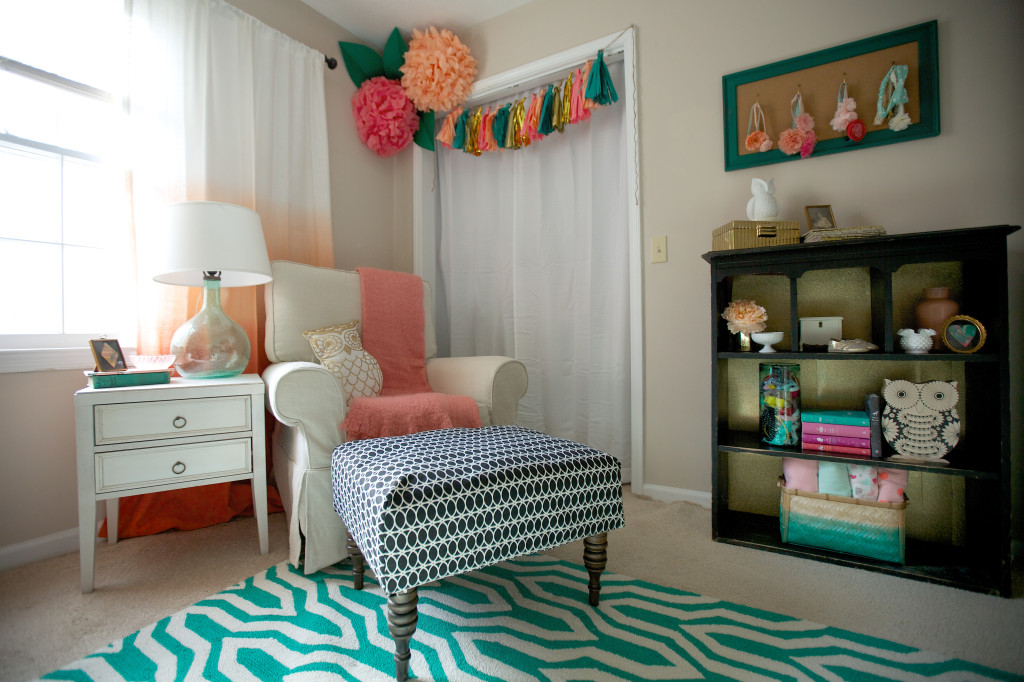 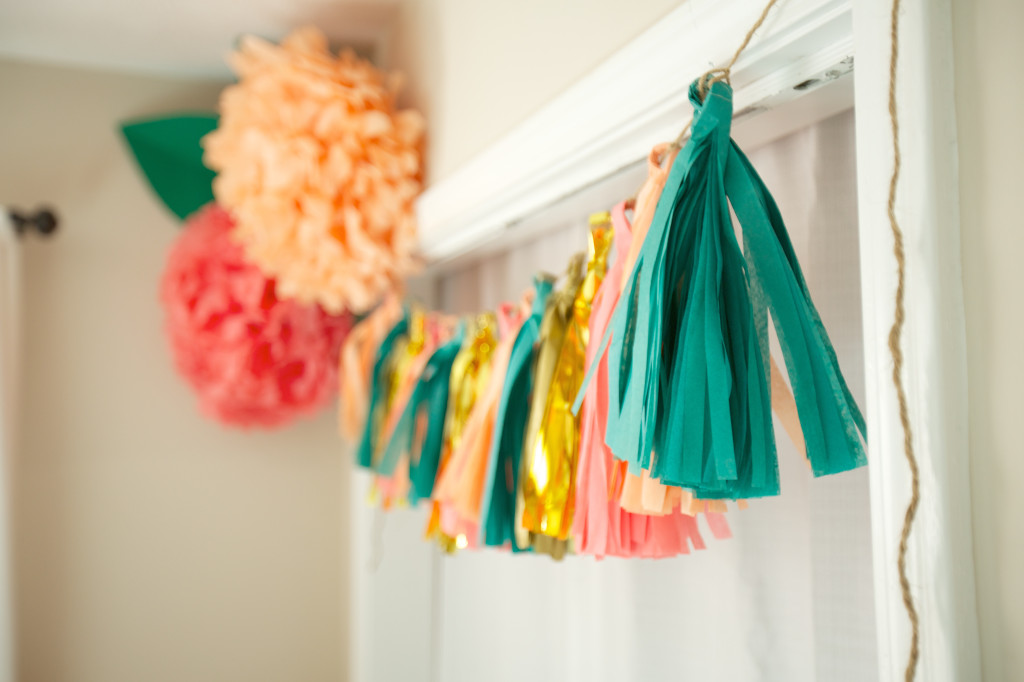 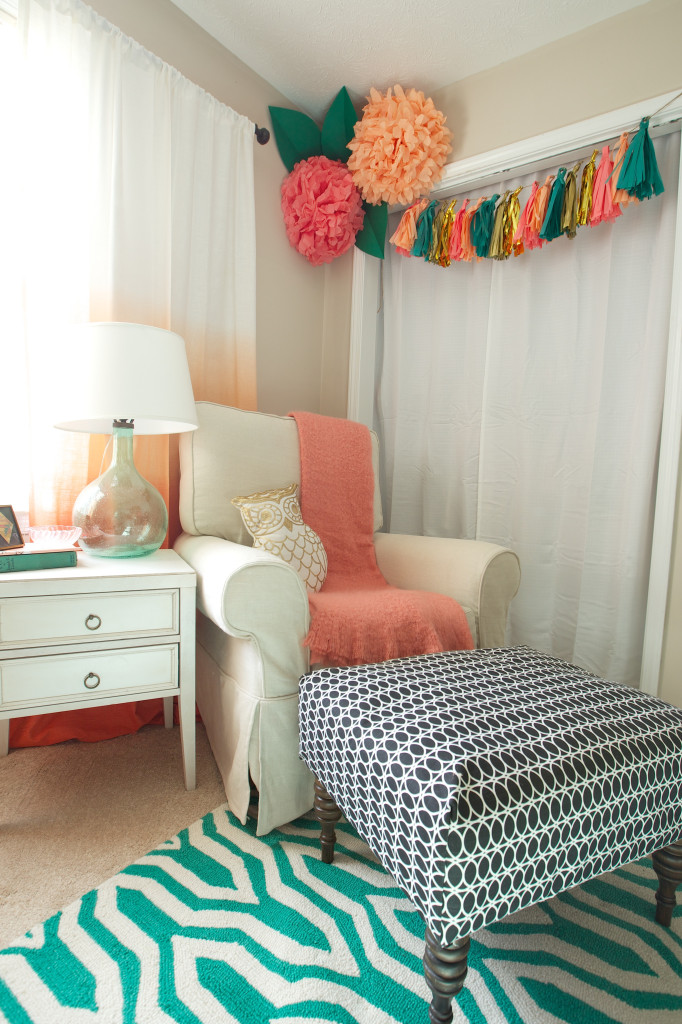 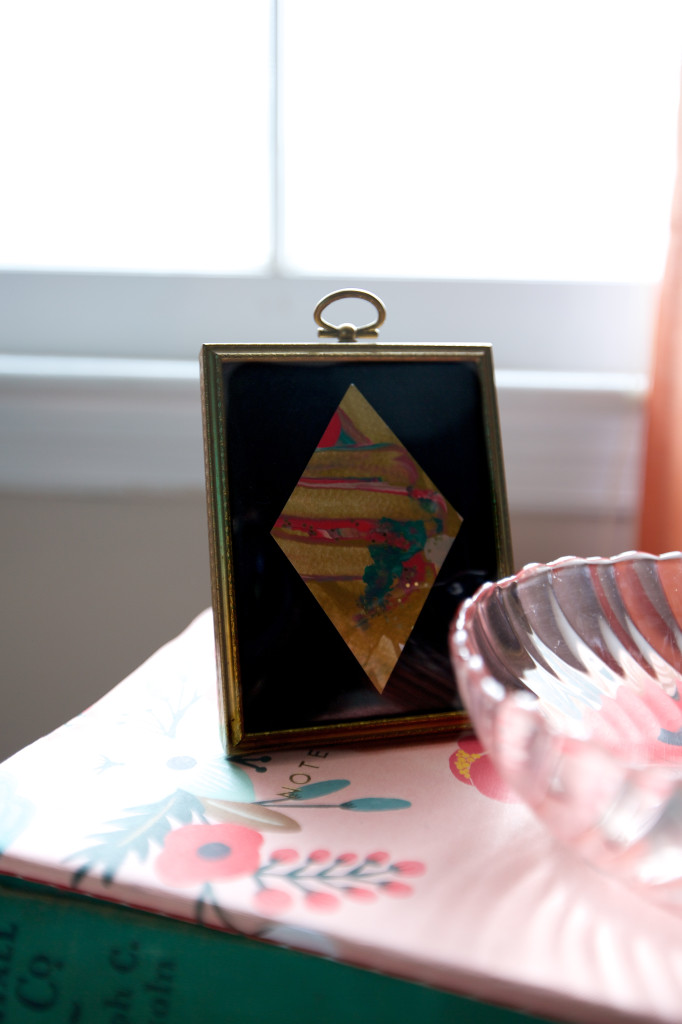 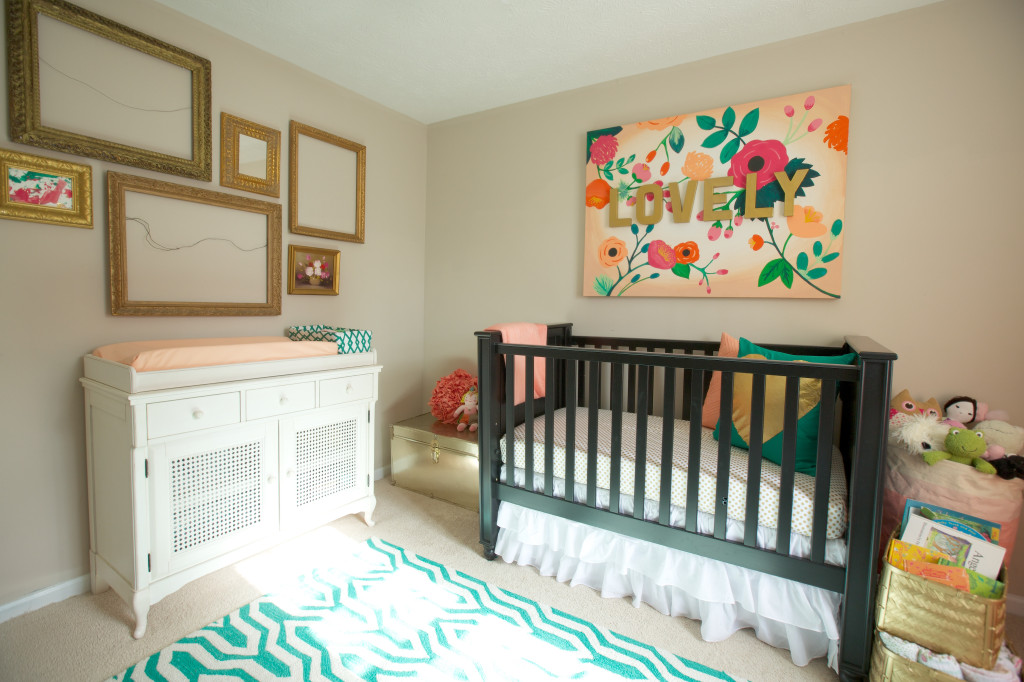 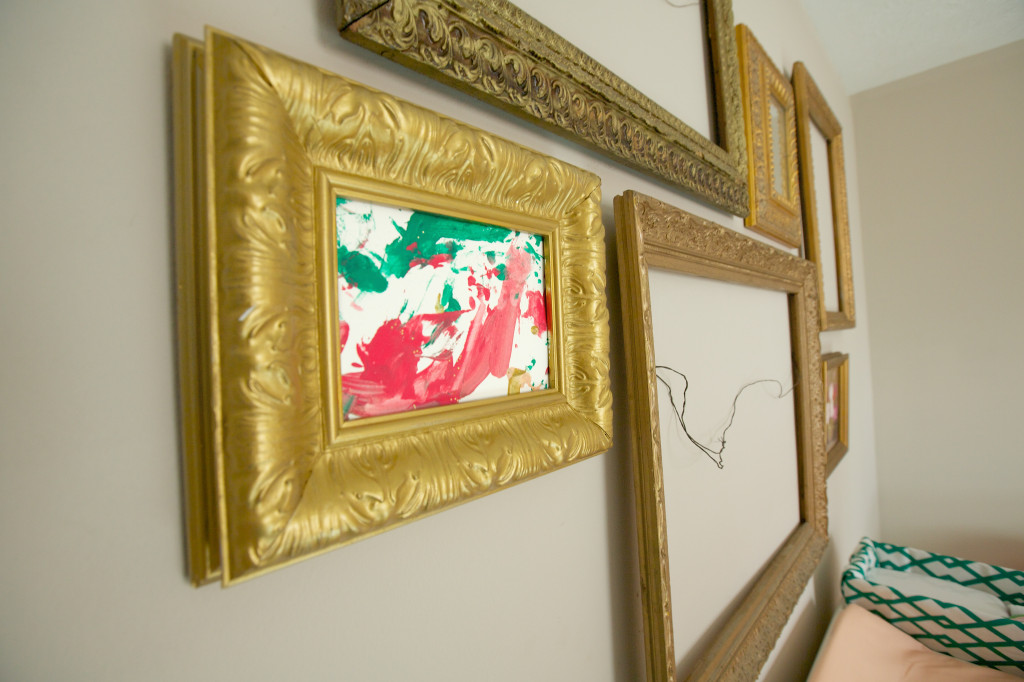 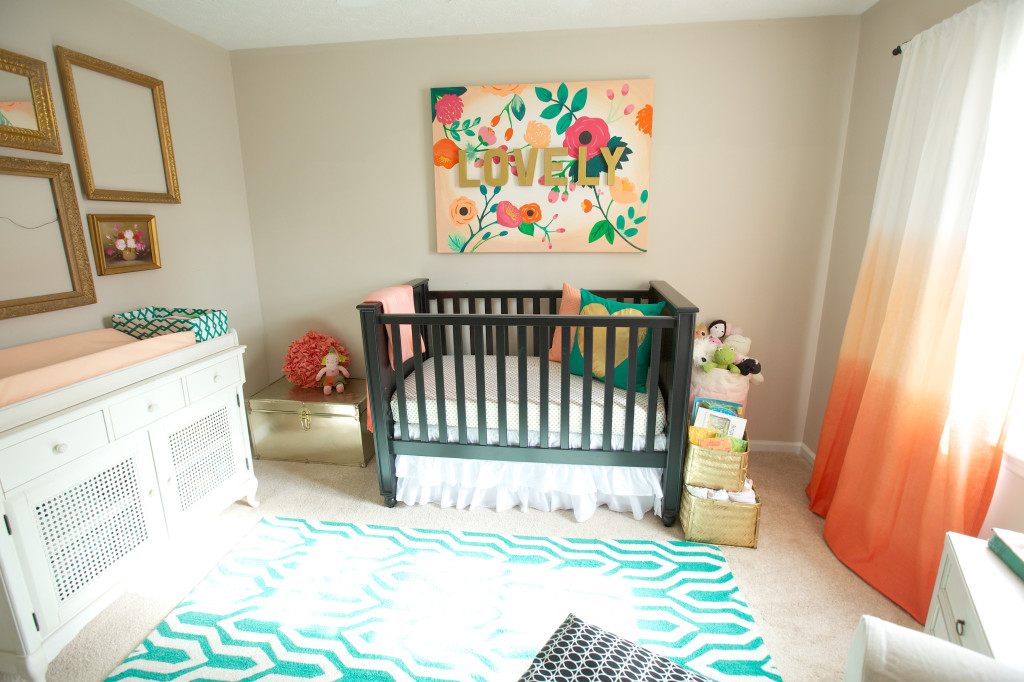 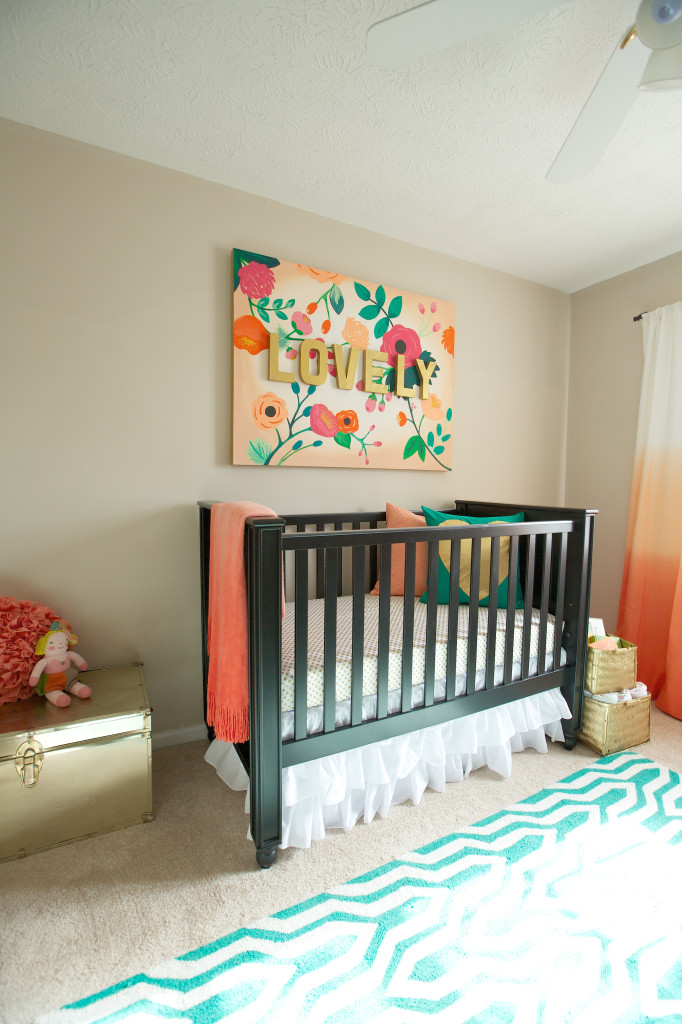 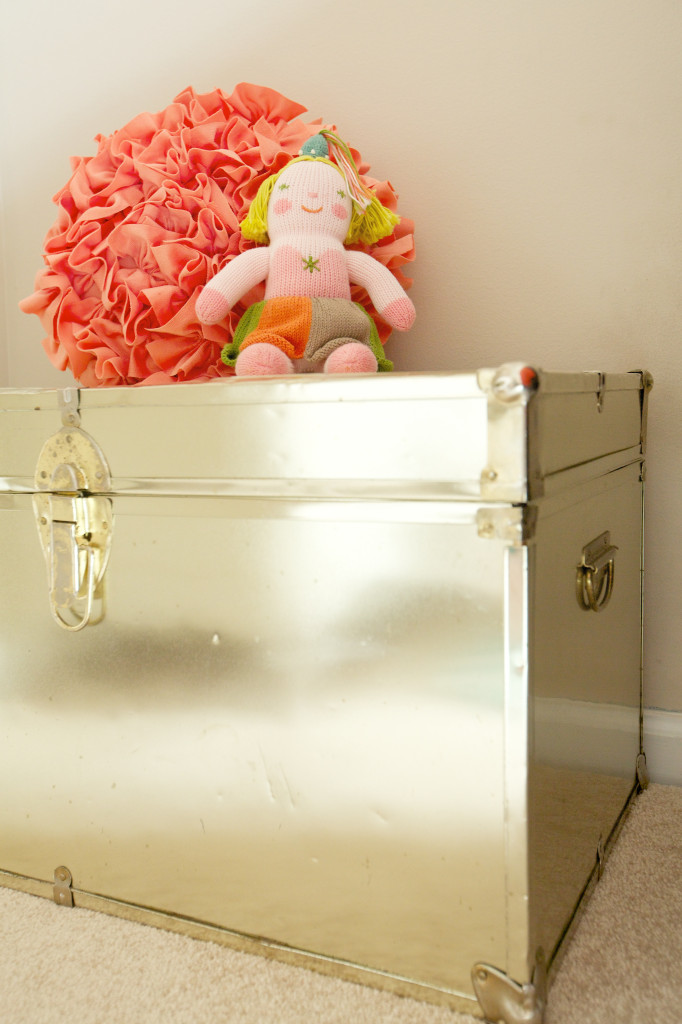 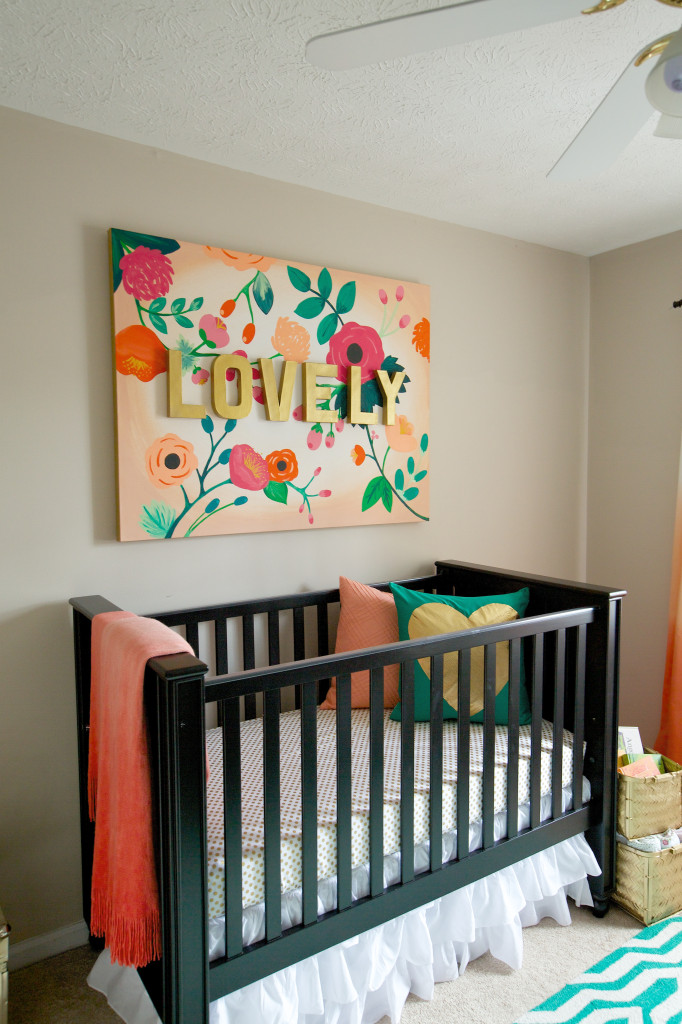 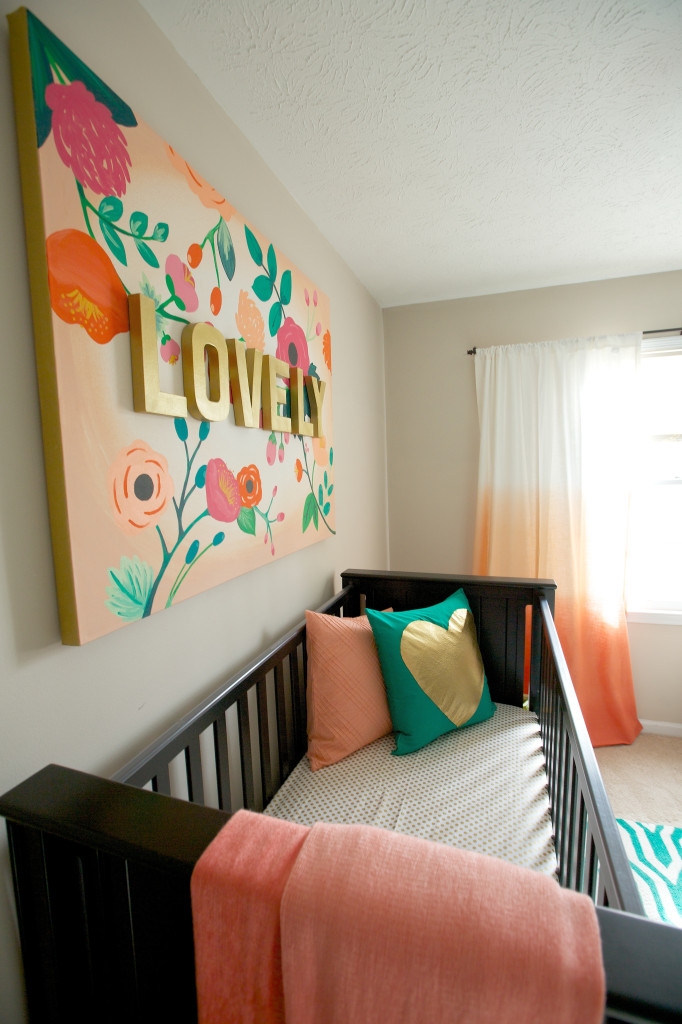 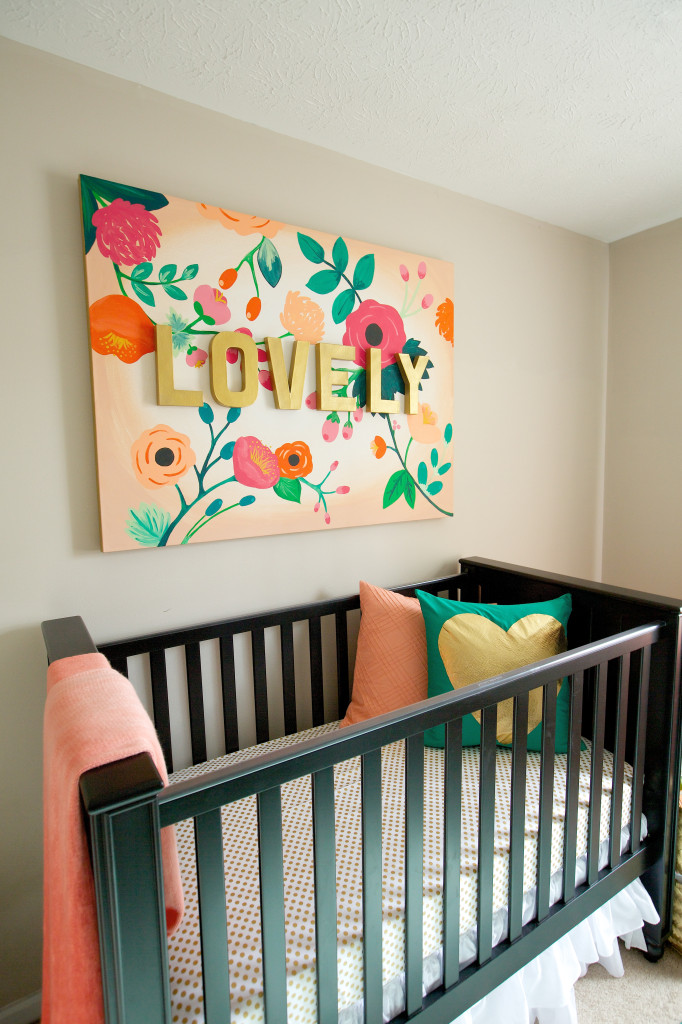 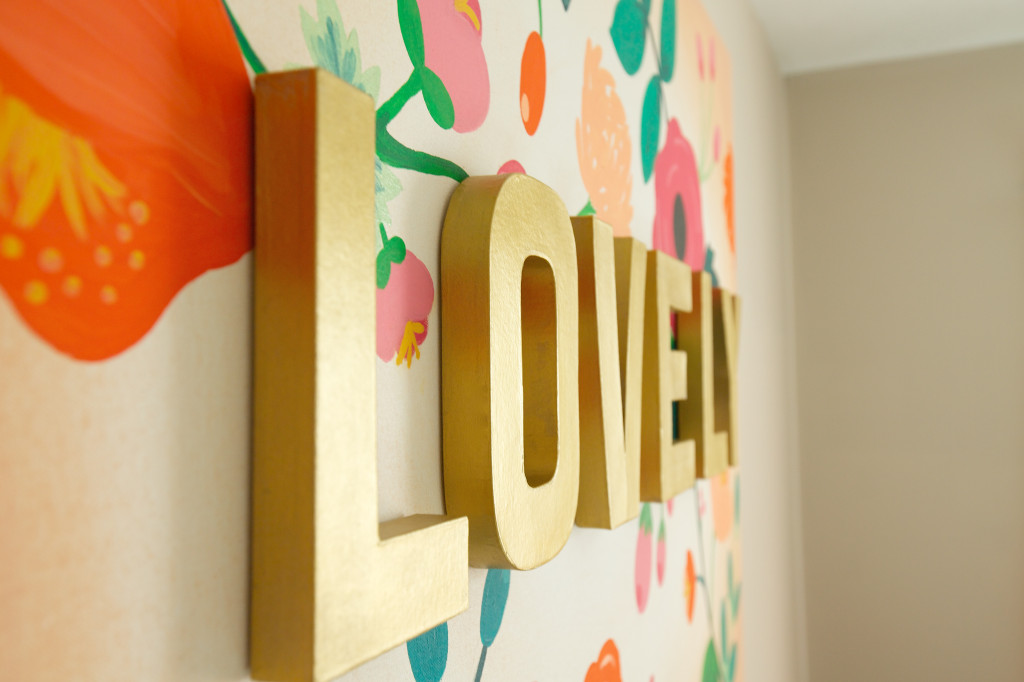 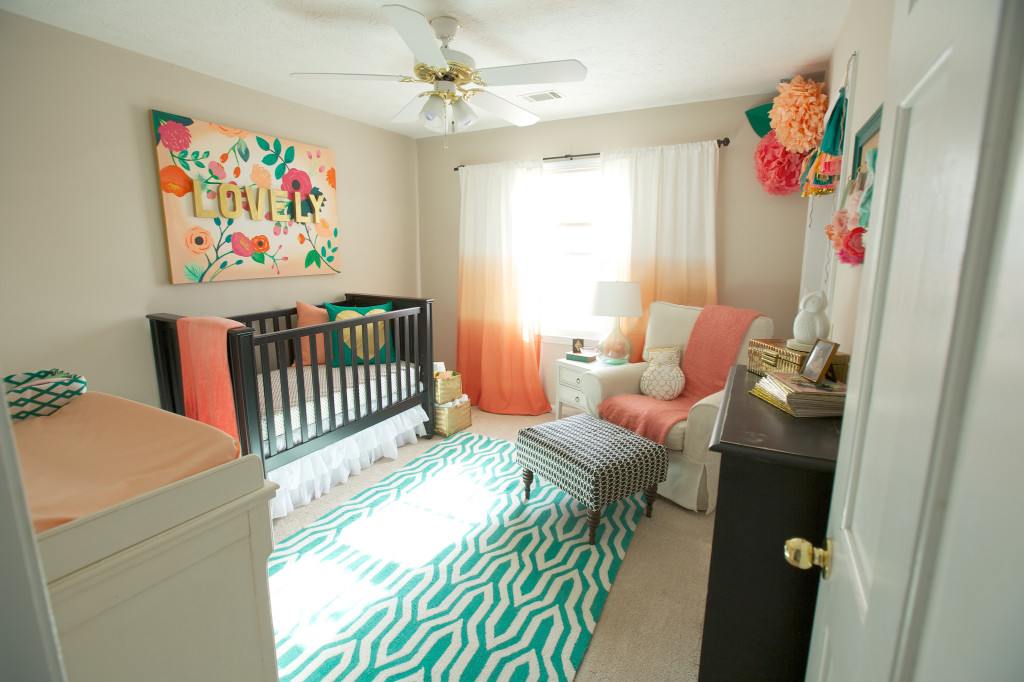