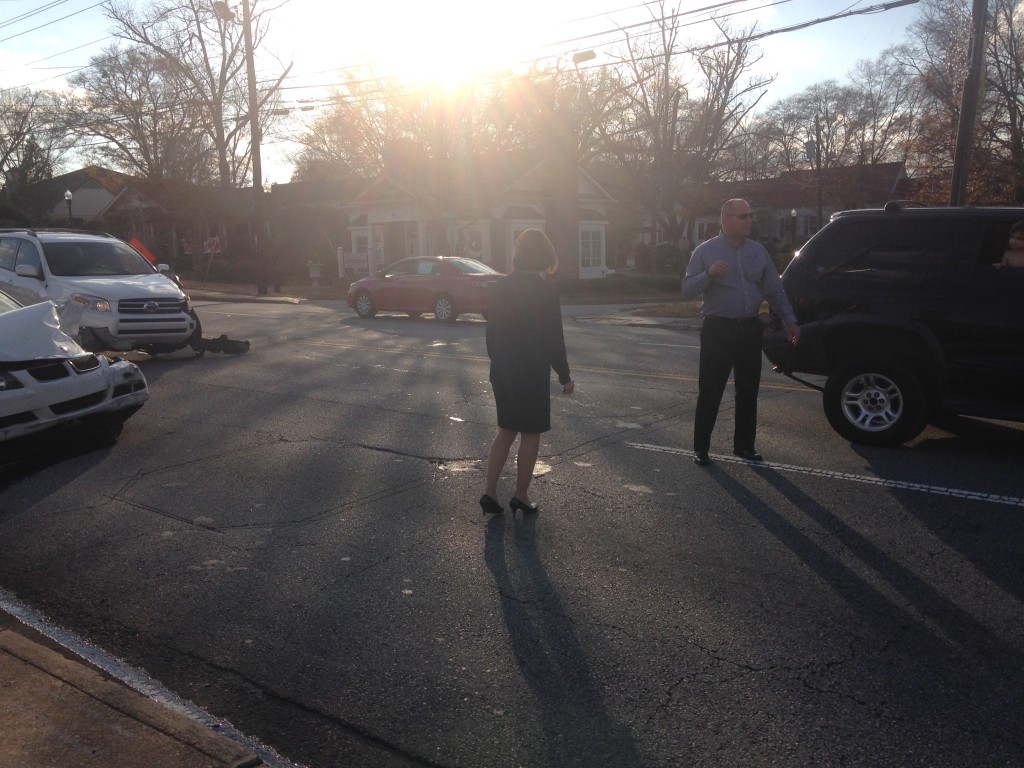 Well, at least today confirms that there’s never a dull moment in our lives. Unfortunately, today’s not-so-dull moment(s) weren’t of the happy kind.

This morning was about as usual as possible with an early-bird wake up from E.V. and Cricket, preschool/Cricket Morning, and long lunchtime naps. When the girls (and I ;) ) awoke, I was in desperate need to get some design work done, so I traipsed over to our gym to drop the girls at childcare while I worked at the cafe. I made it about 30 minutes into working when I heard my name over the loudspeaker.

Ugh.  I was certain it was a poopy diaper, so I packed up and trudged back to pick up a stinky child. When I got there, however, the workers were in a frenzy; apparently E.V. had been playing outside when she just laid down and started barfing. EVERYWHERE.

My poor toddler was wrapped in a towel and propped up against the outside wall while the workers hastily disinfected the playground like Emma Vance had the plague. I scooped up my toddler and baby, shouting apologies as I ran away as fast as I could. Man! We were doing so well not getting sick this season!

I was bummed about having to leave the gym (and for poor, sick E.V. and her first public puke) and feeling nervous because (as we all know) whatever E.V. gets, I get, so as we drove the two miles home, I was contemplating my doom — how in a matter of hours I’d be barfing as well, how I’d be miserable and only able to half-take care of my babies, how I–

And then a car hit us.

I’ve NEVER really been in an accident before. In an instant a life can change — and today we’re all grateful that God was gracious enough to give us our lives and our safety.

I was stopped waiting to turn left to take a shortcut to Amityville with a car stopped behind me. A teenage girl wasn’t paying attention and crashed into the middle car, who crashed into me and threw my car forward quite a bit. Thank God for our wonderful car seats (Cybex and Clek) and my monstrous, decade-old SUV because although her bimmer was smashed, the damage to my Durango was significantly less. I was confused and shaken, but the girls were fine — until I started checking on them and they heard the panic in my voice, which instantly caused Cricket to cry and E.V. to whine. A few cars behind us stopped and helped us get off the busy road; I called Ryan (who was at home a mile away); and I pulled the girls out of the car, which was now parked in a nearby church parking lot.

The whole memory and experience are like shattered pieces of glass in my mind — little bits and snippets are so clear, some screaming from the girl, the crunching of glass, smoke in slow-motion rising from a car, but overall it’s cloudy.

Within minutes the Fire Department and police were on the scene, Ryan was there hugging us all and the church staff had poured out of the building at the sound of such commotion. Thankfully everyone involved was okay, but the poor teenage girl was freaking out. For a little while I just kept back from the crowd of people, partly because I was shaking and partly because I was holding my sick toddler. When the sweet women of the church kept trying to comfort me (with prayer blankets and bottles of water), I’d shout, “We’ve got the stomach bug! Stay back!” much to their amusement. ;) And then, there, in the church parking lot, near my crushed car and a crying Cricket, Emma Vance started throwing up again. On me. Down me. All over me. And you know what? I’ve officially earned my Mom Badge because, well, I just sat there and took it. In public. In the wake of a scary scene. I just sat there and rubbed her back and let her barf all over me.

Oh, and did I mention that when we left the gym I had taken off E.V.’s soiled shirt and shoes, so she was topless, barf-covered and disheveled, running around in leggings and Sofia socks? Ha!

When I finally got around to talking to the poor teenage girl, her family was there. She just kept saying how sorry she was, that she wasn’t looking or paying attention, how she could’ve killed our family, how this was a huge wake up call for her. And you know what? You want to know what I told her?

The reality is that we were all fine (well, except my car, poor guy), and you know what? Things happen. It could’ve easily been me at fault, and it could’ve been much worse. MUCH worse. We were blessed today, and what good would it have done to get angry? The people in my life are safe, and cars are easily replaced. No big. In a very small way, it was a way for me, for us, to show a little bit of Jesus’s grace to someone today. In truth, I would’ve hugged her, but, once again, we have the stomach bug, so hugging her would’ve been the opposite of giving grace. It’d be giving germs and wrath instead, haha!

So, friends, no, there’s no such thing as a dull day at the Shove household, that’s for sure! So far E.V.’s stopped throwing up for now and no one else is showing signs of The Bug (time will only tell), and tonight we prayed and thanked God for everyone’s safety and health. The only lingering issue? They say bad things happen in threes, and, well, so far I can only count TWO bad things…eek! ;) Lock your doors!

Okay, now for some silver linings to my bad day:

1. The women from the church were SO sweet! They gave the girls prayer blankets and were gracious and kind. What sweet mementos from an otherwise dreary experience. ;)

2. One of the church employees asked where we went to church. I replied North Point, and she smiled and nicely replied, “I thought so.” (Ha!) I added that Ryan used to work there (he was off to the side not listening at this moment), and she said, “I figured. Is he a musician there?” Anyone from North Point (especially Ryan’s former staff friends), feel free to chuckle, because I sure did!

3. I did eventually get my design work this evening. ;)

4. Ryan’s at Buy Buy Baby exchanging our car seats right now. HUGE shout out to that company; I called simply to inquire if they had our current style of seats in stock (because once car seats have been in an accident, they’re dunzo), and they replied that since we bought with them and with a registry, they’d exchanged them on the spot, for free. Really?!? Plus, I bought E.V.’s big girl seat (a Clek Foonf) knowing that it’s fully recyclable but not thinking that it would be recycled for many, many years — but I feel good knowing my otherwise-good-but-now-useless seat won’t be sitting in a landfill.

5. I think that, beyond the emotional roller coaster and hassle of having to deal with insurance and repairs, this was a relatively consequence-free way for the teenage girl to learn a lesson. Who knows this event’s purpose in her life? She seemed to be greatly impacted, and I hope our “sacrifice” will be used for good in her life.

6. There’s still a long road ahead of us to get my SUV fixed, but I’m secretly hoping that for some unearthly, miraculous reason it gets totaled. I mean, I love my Durango, but it’s ELEVEN YEARS OLD. He’s lived a good life, and maybe it’s time to be put out to pasture? ;)

7. Ryan and I joked that the accident somehow “caused my roof to rust and the paint to peel.” Hahaha! Do you think insurance will buy that and pay for a new roof?

8. I’m happy to hold my healthy, safe babies and husband tonight more than ever. They say you can’t appreciate something until it’s gone, but today proved them wrong.