When we found out we were having a girl, we were thrilled. Truthfully, I actually wanted a girl–although I suppose I shouldn’t admit that fact and should opt for the less superstition-inducing “I’d have been happy either way as long as it was healthy…” answer. Deep down I just never imagined myself as a mother to all boys, and so having a girl first was ideal. (Now I can honestly be happy regardless of our subsequent kids’ genders.)

I should confess that I have had a few moments of sadness for Ryan since we found out that we were having a girl. (Ryan would’ve been just as proud either way, but leaned toward “girl” since he knew it meant a lot to me.) As a man, I know he has always dreamt of being a Pop Warner coach, of passing down the Scout to a son, of teaching a boy how to treat a lady…and although he LOVES Emma Vance beyond measure, she simply isn’t able to fulfill those desires of his. I’ve never had any doubts that Ryan would adore her, but I do have to say that the relationship between them has been amazing to watch. I mean, he loves her. Like, loves her in a way that he could never feel about a son. He is her protector, her source for self-confidence, her first view of how a man should love her one day. In return, she gives him her whole, tiny heart without reservation. Although those desires for a father-son bond still exist, there’s a bond between E.V. and Ryan that’s on a completely different level.

As a mom, I’m privileged to a lot of experiences with E.V. that are just between us (and, yes, I am unashamed in my selfish adoration of those instances). Unfortunately, though Ryan may be nearby during those memorable moments, I know that it’s not the same as being in those moments. Truthfully, he’s the only other person that I want to share those precious experiences with, and it’s been difficult as he’s been unable to witness some of them simply due to circumstance. For example, we’ve realized during our time with her that she recognizes me as Mom, and that, due to nature’s order, she is more easily calmed by my presence. This means that when she’s irrationally upset and crying, it’s better for me to soothe her, so Ryan misses out on kissing her little tears away. (Which is both a saddening and joyful experience for me.) He does have his routine with her that allows him time to bond and care for her, but truthfully they aren’t the most satisfying of tasks (read: diaper changing…yuck) and have left us both wanting him to have even more meaningful time with her. Tonight, he got that chance…

Ryan gave Emma Vance her first bottle this evening. We’ve been meaning to get the whole bottle concept introduced for about a week now, but it’s been a little busy around here with Ryan’s work picking back up. Plus, we’ve never done this whole bottle thing before, so the logistics of the event caused us to procrastinate. However, this morning I realized that I’ve fed her over 150 times in the past three weeks, justifying my growing desire for a break.

We prepared the bottle, got Ryan all settled in the nursery with the rocking chair, Boppy and burp rag, and set E.V. down in his arms.  Now what?  I mean, I kinda’ feel like an old pro at the whole nursing thing by now, but bottles? No clue. Thankfully E.V. is super smart and took to it quickly, and although I’ve read that my presence could’ve messed up the whole bottle-feeding situation, I just couldn’t leave Ryan’s side. It was amazing. I know it sounds a bit cheesy, but feeding E.V. has been a major bonding experience where I’ve gotten to learn so much of who she is, and now Ryan gets to experience the same thing. Since she didn’t have any difficulty, I did give them a little privacy once she was settled, and hearing him talk afterwards about all of the cute, little things that she does while eating melted my heart. He has loved and adored her since Day One, but now he’s going to have the opportunity to know her on a deeper level, and that is the most satisfying thought to me.

While he fed her and I did the nightly dishes in the kitchen, I couldn’t help but think of this as their first Daddy/Daughter Date. Exactly how many more special events in her life she’ll share with just Ryan, I’m not sure, but tonight we began a really important tradition, which makes me a little weepy. I can just imagine them going to get ice cream, at the Valentine’s dance, having tea parties… There is a bond between a daughter and her father that cannot be replicated in any other relationship, and tonight I thanked God for a great start to theirs. 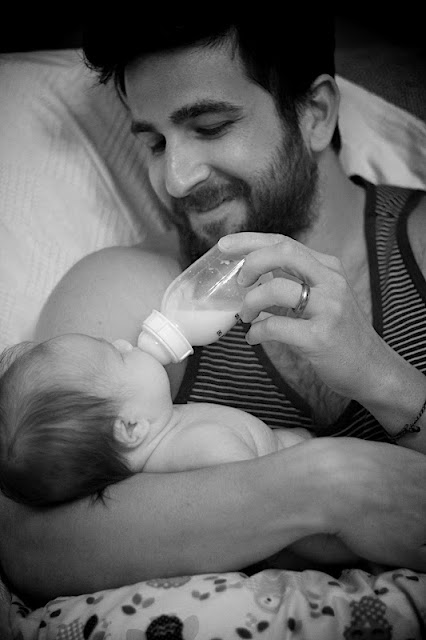 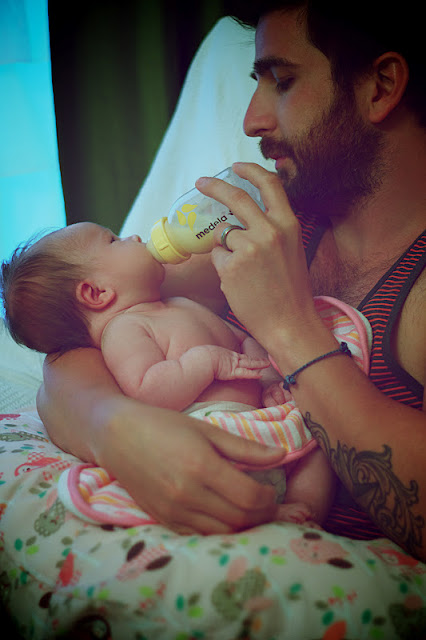