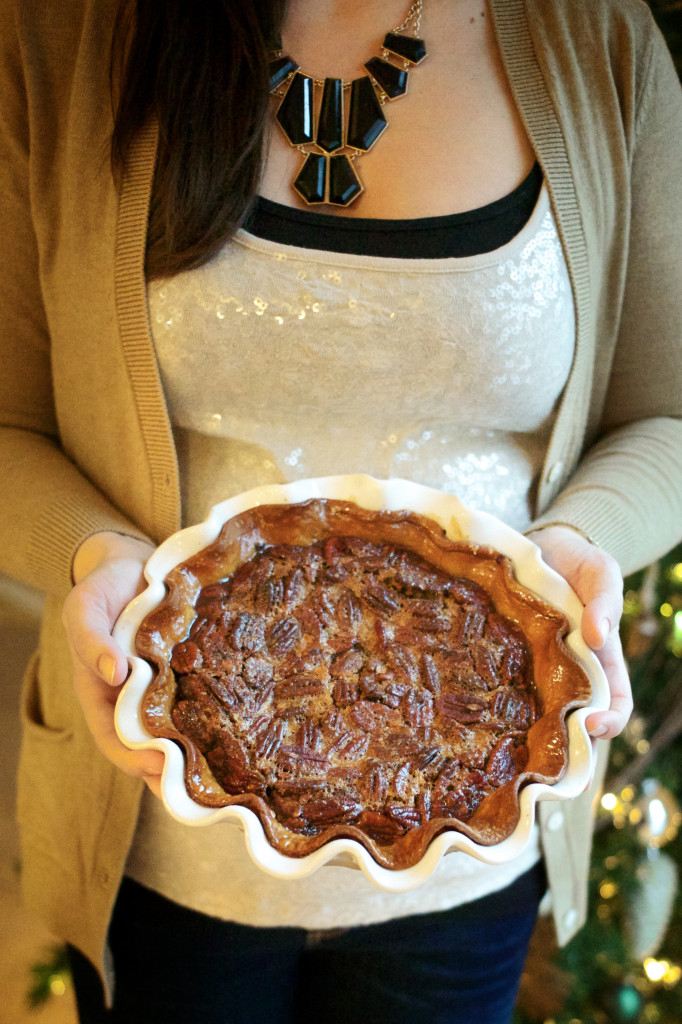 Okay, here we go! Recipe #2 in my effort to use my kitchen to its fullest potential in 2014. Yes, it’s another dessert, but I had good reason. Yesterday some friends and I gathered to gab and celebrate a very important person’s birthday. Jesus’s. Just kidding. (Is that joke sacrilegious? I take it back then. :) ) No, the Christmas madness starts tomorrow; yesterday we instead celebrated our friend who was an almost-Christmas baby nearly 30 years ago. I was in charge of dessert, which means my homemade effort had to be centered around sugar. (Hence the second dessert recipe.)

I’d never made a pecan pie before, although it’s by far my favorite type of pie, so I figured the challenge of making my first one fit into my 2014 goal. I blame this lack of experience on two things: 1. A pecan pie just seems like one of those complicated dishes that can get totally messed up if you’re off by a 1/16 tsp somewhere, and 2. We have a friend–a guy friend who will remain nameless, although you know who you are–who bakes the best pecan pie EVER. And I mean like EVER-EVER. He’s one of those friends whom you invite over for dinner and hold your tongue because you want to request he bring a pecan pie with him EVERY TIME you have a meal together, but you don’t–mostly because you don’t want him to think you’re only friends with him for the pie. But you are. Just kidding! It’s really more of a bonus than a reason. ;)

I learned two very interesting things while making my first pecan pie (besides that it’s way easier than I had imagined):

1. I personally can’t taste the difference between raw sugar and sugar when baking. It was all that I had on-hand, and I was scared to use it because everything online said it would add a distinct, earthy flavor when used in baking. In an effort to NOT make ANOTHER trip to the grocery store (amongst the Christmas-dinner-preparing masses), I decided to give it a whirl, and it worked! (Good to know for future recipes.)

2. The science behind how a pecan pie actually becomes a pecan pie makes about as much sense to me as the science of “Hot Tub Time Machine.” (30 Rock reference anyone?) Our oven at Amityville is a mystery, being apparently WAY hotter than the set temperature–on occasion. Knowing this, I always turn the oven lower than a recipe calls for and then have to watch my dish to make sure it doesn’t burn. Needless to say, I watched the entire process of the pecan pie baking yesterday, and it was fascinating. First of all, the raw filling only filled up the crust about halfway. Since there’s no baking soda or anything in it, I thought that surely it wouldn’t rise. And it didn’t–until the last five minutes or so. I also had to Google how to know when a pecan pie was done, and although it said “when it doesn’t jiggle,” my pie jiggled the whole way through, even when it puffed up in a giant mound for the last five minutes in the oven. When I took it out, it pretty much collapsed on itself, and then set while hanging out in the fridge for a few hours. I was worried that the insane baking process meant that my pie would be terrible, but it was awesome (if I do say so myself).

Overall, pecan pie? Yeah, I can handle that. Unroll pre-made pie crust; mix a few ingredients; add pecans; dump into pie pan. Voila! You can officially call yourself a Southerner.

Here’s my super-secret recipe, straight off the back of the Karo corn syrup bottle. Yup, that’s classy. :) 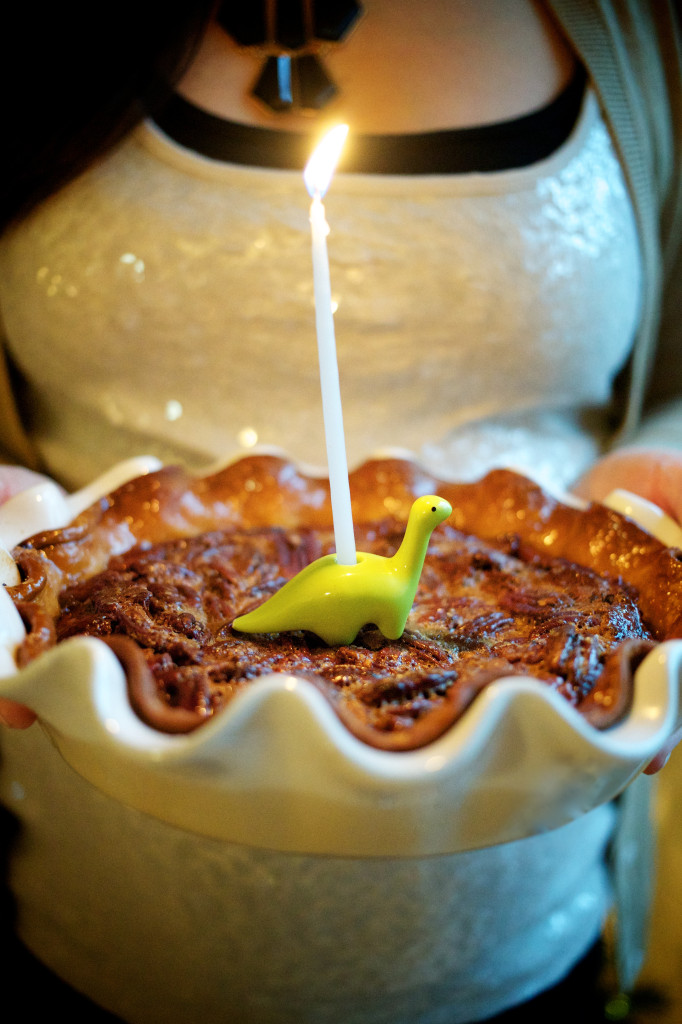 When you turn 29, it’s totally appropriate to have a dinosaur candle holder on your birthday pie.