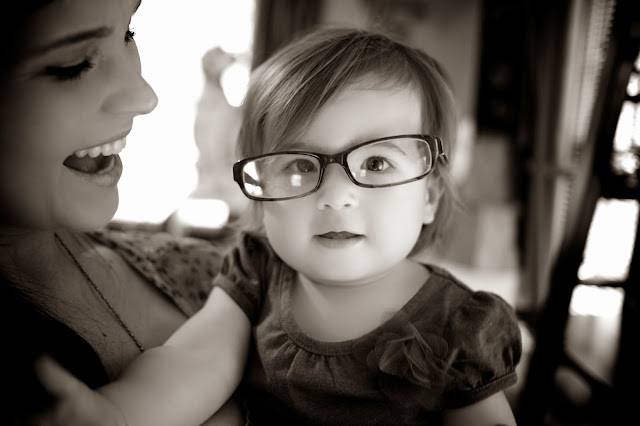 Exactly six months ago I took Emma Vance to the eye doctor because I was afraid she had a crooked eye. (Read about it here.) It turned out that her eyes were straight as can be, but the doctor did notice a significant amount of astigmatism when he examined her. He asked to see her again in six months…which was today.

First of all, I’m pretty darn proud of myself that I remembered the appointment, considering it wasn’t in my calendar and I didn’t receive a reminder call. :) Second of all, this might have been the single most expensive five minutes of my life (a $50 co-pay). The doctor took a quick look at her eyes, handed Emma Vance the toy she was desperately trying to grab from his hands, and said, “Well, her eyes look great–as straight as can be–BUT that astigmatism is still really bad.” The verdict? Another appointment in a year where we’ll most likely get her glasses…which got me thinking.

I know this is ridiculously superficial, but I don’t want E.V. to have glasses at two or three years old! Bad eyesight has been a burden for me my entire life, and it only started for me in fifth grade. I’m cursing myself because I voluntarily went to the eye doctor last year. If I had just waited it out a bit (and could see how straight her eyes really are), then we wouldn’t be seeing an eye doctor for years, probably not until kindergarden. I know that glasses (and contacts and Lasik) are inevitable in her future, but I don’t want to deal with forcing a toddler to keep her glasses on (especially since we’ve had zero success with sunglasses) and, to be transparent, I don’t want her to grow up with glasses as a part of her childhood identity. Truthfully, at most I’d rather get her glasses when she goes to school and deal with it then, when we can actually explain and demonstrate to her the “whys” behind her vision. I know this is terrible, but Ryan and I talked about praying that her astigmatism goes away–which can and does happen–but is that the world’s most superficial thing? I mean, here I have a perfectly healthy baby, and I’m worried about her having to wear glasses too young? I don’t know, but regardless of my wrestling with feeling superficial, God already knows that my heart wants her to be a glass-free toddler, so I figure I might as well verbalize it to Him anyway. Let’s hope that a year’s worth of badgering the Big Guy pays off. :)