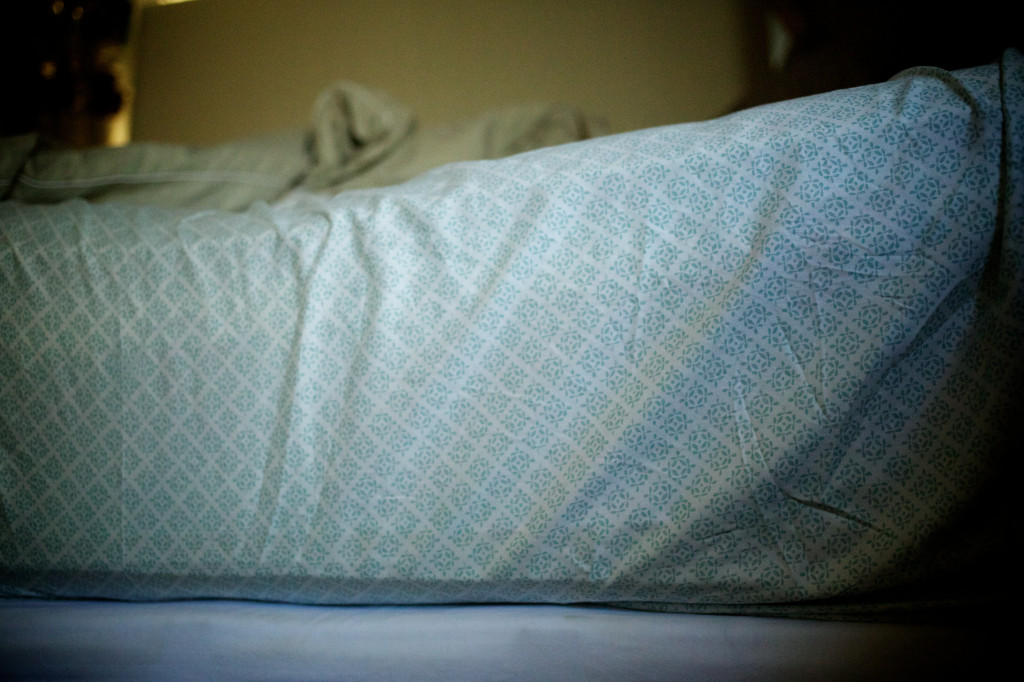 (First of all, the title of this post is a 30 Rock reference, and if you recognized that right away, can we be besties??)

One of the “delightful” little quirks of Amityville is that it features a grand staircase {sarcasm, clearly}. In all actuality, it’s anything but grand, and in fact, on moving day, our king mattress got stuck on the staircase as the movers attempted to get it up to the master bedroom. (Apparently in the ’70s no one thought about the angle between the ceiling, stairs and handrail versus the size of a king mattress.) Left with a decision to make about our dilemma, we told the movers to just bend the mattress to squeeze it through. Truthfully, it was the right decision. I call it the “right” decision because the only alternative was sleeping on the floor, so…yeah. HOWEVER, once we put the bed together, there was a clear dip in the mattress (on my side, of course). It was broken!  Oops.

Fast forward a year or so. We’ve been living with our broken mattress all this time for a few reasons, most important of which is that we knew that no other traditional king mattress would ever fit up those stairs, and I’m weary of foam mattresses. At first, sleeping in the crevasse was HORRIBLE. I mean, when I turned over to talk to Ryan I would literally have to look up at him in order to have a conversation. I was constantly sleeping on the edge of the bed because of the slope, and getting in and out of the crevasse proved to be an unnatural transition. The funny thing is, though, that over time I got used to it and finally came to terms with the idea that I’d be sleeping in a ditch until we moved again. Ryan, on the other hand, never gave up hope. (Perhaps he felt guilty having to look down on his wife every night for a year? Haha!)

For months Ryan’s been trying to convince me to get a foam mattress–even if it’s a cheap one as a temporary fix until we move. I’ve resisted and resisted, but as I’ve reached the end of this pregnancy, my resistance has worn thin. I’m in constant pain from ankles to shoulders, have cramps in my calves and have been fighting the same knots in my back for months. Every day Ryan and I wake up without feeling refreshed. Maybe it’s time to admit that it’s the mattress? So, in the midst of the snowstorms a few weeks ago, I caved and agreed to let Ryan buy a foam mattress. We were desperate for a good night’s sleep and figured it was time for me to climb out of the crevasse.

The end result? Well, we’ve been living with our new foam mattress for about a week now, and it’s horrible. Bah. Go figure! :) I feel slightly vindicated that my experience with foam mattresses has rung true, but when you wake up in the morning with sore spots and a headache, being right doesn’t feel so great. Let’s just say that I’d gladly swallow my pride in exchange for a good night’s rest! The biggest issue is that the new mattress is really hard and perfectly level (duh), which is a complete 180 from how we have been sleeping. Plus, it’s brought attention to the fact that our pillows are too flat and thin, so now we’re on to getting new pillows to see if that helps. I never thought I’d miss that dang crevasse, but in hindsight, in some weird way it fit my big ol’ pregnant belly quite well–or at least better than our new mattress. Sigh. I suppose we’ll get used to this bed, too, with time, but if I ever was eager to find a home before, consider my motivation doubled! ;)