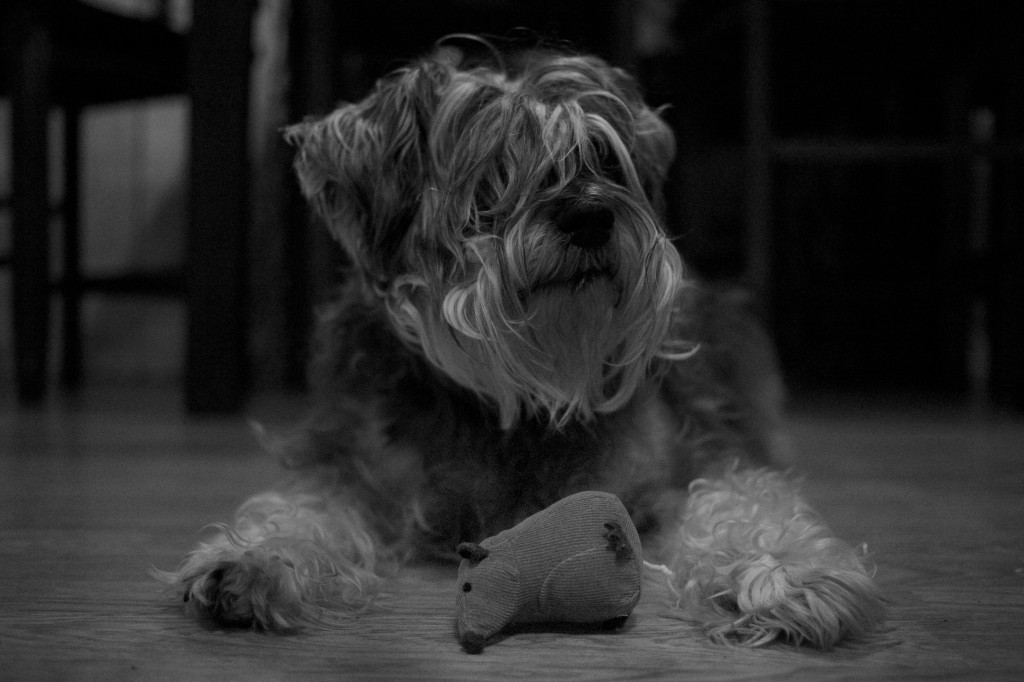 If you’ve been reading along, you might remember that about a month ago we had a mouse in the house–or, rather, a mouse terrorizing our house.

I know what your initial reaction probably is–You’ve had a mouse terrorizing you for a MONTH?!? Why did it go on for so long? Poison works overnight! Well, we hit a road block in solving our mouse problem just a few days after actually discovering the problem. What was the road block? Um, we gave him a name. {insert sheepish grin} Ryan caught a glimpse of the little fella late one night when he heard tiny feet scurrying around the kitchen; when he and Oscar went to investigate, they were eye-to-eye with what Ryan described as “the teeniest, tiniest, cutest little brown mouse you’ve ever seen.” Obviously frightened, the mouse ran away lickety split, and so Ryan nicknamed him “Scooter.”

Now, remembering that I’m a bleeding-heart animal lover, as soon as I heard this story, I was in a dilemma. I had asked Ryan to buy a trap and kill what I had envisioned as some disgusting, hideous varmint, but as soon as I had the image of sweet, innocent Scooter in my mind, setting that trap (even via Ryan vicariously) became a psychological battle. It took a few weeks for me to villainize Scooter again and to be okay with killing him. When Ryan came home with the trap, I told Ryan that I didn’t want to know anything about it other than that the deed was done. (Even though Scooter was officially a “bad guy” again, I still couldn’t come to terms with playing a part in his demise.)

Well, God bless my sweet husband who took the trap and instructions out while I was in the other room. He had no idea that I’d be back so soon, and the minute that I walked in the kitchen and saw what he was about to do, I burst into silent tears. I imagined the last moments of that tiny, brown mouse’s life and how awful his end would be–and lost it. Ryan just happened to look up about a minute into my quiet sobbing…and immediately died laughing (after quickly putting up the trap, of course). How thankful I am that he just gets me. He hugged me, and through his own chuckling said, “So really what you want me to do is house-train Scooter, right?” Yes, that’s it! I’d be glad to feed him if he’d learn not to crap in my house!

We tabled the trap idea for a few nights for obvious reasons.

Then, a couple days ago, as I was sweeping under the kitchen table, I saw what I thought was a leaf hiding in the shadows. Upon closer examination, I realized that I was mistaken; it was a dead mouse! I had greatly underestimated the instincts of my rat-catching schanuzer Olive, who had spent an unusual amount of time under the kitchen table that day. (We knew it wasn’t Oscar’s doing because, well, he doesn’t have any teeth.) In some strange way, this was the best outcome possible. In my heart, it felt like the natural order of things had occurred, and the fact that my rodent problem was solved without my playing a role was the best case scenario. Ryan disposed of the body while Olive got big hugs and praise, and for the first time in a while I went to bed without wondering who or what might be scurrying about in the middle of the night. Whew. The reign of terror is over!