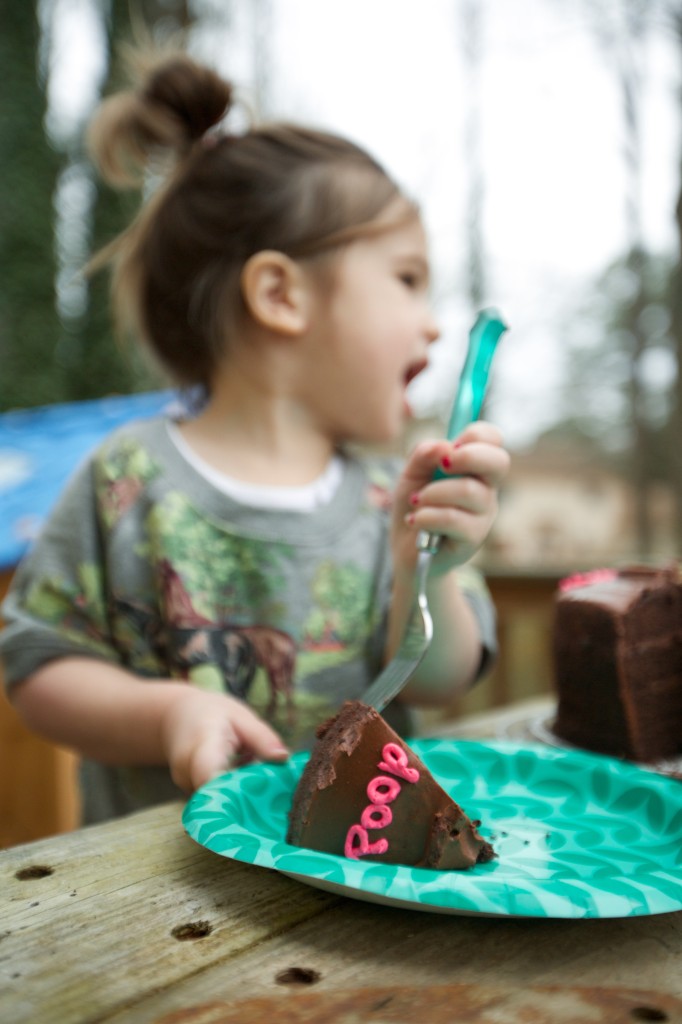 If you’ve been following along, you might remember my unsuccessful foray into potty training a few months ago. (Okay, more than a few months ago, but who’s counting anyway??) We made a valiant attempt with the Three Day Potty Training Method…and failed…miserably.

Fast forward until just after Christmas break when one day E.V.’s teacher randomly asked me after class if we were potty training. I responded with a confused not even one bit, and she told me that since a few of the kids in the class had done potty training over the break, Emma Vance had been asking to “go potty” as well. Yay for positive peer pressure! She had shown ZERO interest with us at home, impervious to bribes and coaxing and encouragement. We anxiously awaited for her to ask to use the bathroom with us, but alas, it seemed that it was only under the influence of her toddler buddies that she cared about “being a big girl.” I had given up hope, discussing with Ryan attempting the Three Day method again after Cricket’s birthday in a few weeks. However, a week or so ago, after bath time while we were putting on “Big Hero 6” to watch as a family movie, she asked, “Mommy, me go potty?”

I scrambled to get her little plastic potty and then set her on it completely naked. And then we waited.

That night she sat on the potty for the entire movie, and then, in a burst of excitement and pride toward the end, she popped up and shouted, “I went pee pee!” Yessss! Success, finally!

Every night since then, we’ve had the same routine, and we’ve found that rewarding her with Hershey Kisses is our best means to motivate her. Of course she’s somehow wormed her way into earning “incentive chocolate,” i.e. a chocolate kiss when she first sits down. (Oh, well, I figure it’s teaching her vocabulary, because she’s quickly learned the meaning of “incentive” this week!) Each night we’ve had success with #1, and now she’s started to tell us that she needs to potty during the day occasionally. We’re a far way off from being truly potty trained, but she’s slowly and independently working on it!

And then there’s poop. Yuck.

E.V. doesn’t mind peeing in the potty, but she’s vehemently refused to poop without a diaper on. She even told us the other day, “I have a poopy in my booty!” while holding her bottom, but even though we rushed to the potty, she just didn’t. So Ryan and I tried bribing her with chocolate kisses, but it wasn’t enough to convince her. Then, after doing a dessert tasting for Cricket’s first birthday cake, Emma Vance got a craving for cake. {insert genius mom moment} “You can have a cake when you go poopy in the potty. A WHOLE CAKE, but ONLY if you go poopy in the potty.” Talk about motivation! Her eyes got as wide as saucers, and she’s been “trying” ever since. Today, though, she was successful for the first time! Hallelujah!

I’m a mom of my word, so I honored my promise, and we went to Publix to get a cake. A Poop Cake, to be exact.

The poor teenage boy who helped us pick an ironically-chocolate cake had no idea what he was in for when he asked what he should write on it.

“Well, she wants pink writing. And it should say ‘I Went Poop on the Potty.”

He stared blankly at me for a second while it sunk in, then turned bright red. I laughed and explained a bit, which only made him turn even redder as he chuckled awkwardly. He then politely suggested the bakery manager do the writing.

The poor Spanish-speaking manager was shocked at my request, and he was sure that he heard me wrong. In fact, he was so sure that he made me write it down for him, and when he read it correctly, he laughed a hearty belly laugh. In fact, we all did. A few moments and jokes later, and E.V. had her Poop Cake in-hand, as promised! She was so excited and proud; it was totally worth it.

When we got home, I told Emma Vance she could eat as much of her Poop Cake as she wanted, that she didn’t have to share if she didn’t want to, that she didn’t even have to use a fork if she didn’t want to! This was all about her and celebrating her accomplishment, and she had the best. time. ever. eating that silly cake. Overall I’d say it was a pretty genius move, and certainly a funny memory that we’ll be sure to remind her of until she’s 33. “Hey E.V., remember the time you ate a Poop Cake? We sure do!” ;) 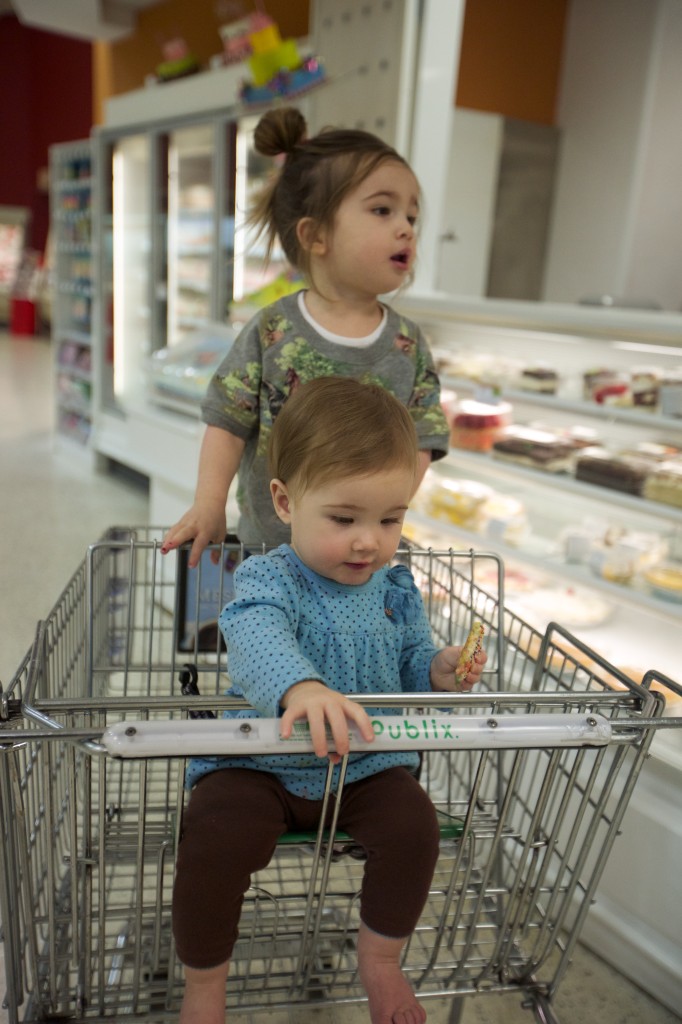 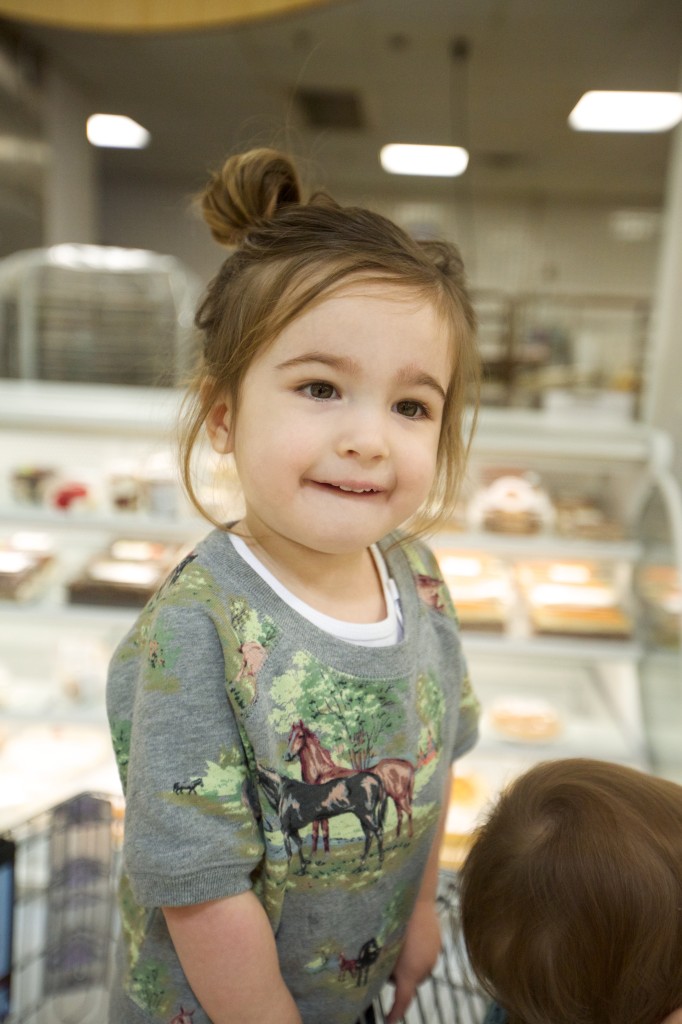 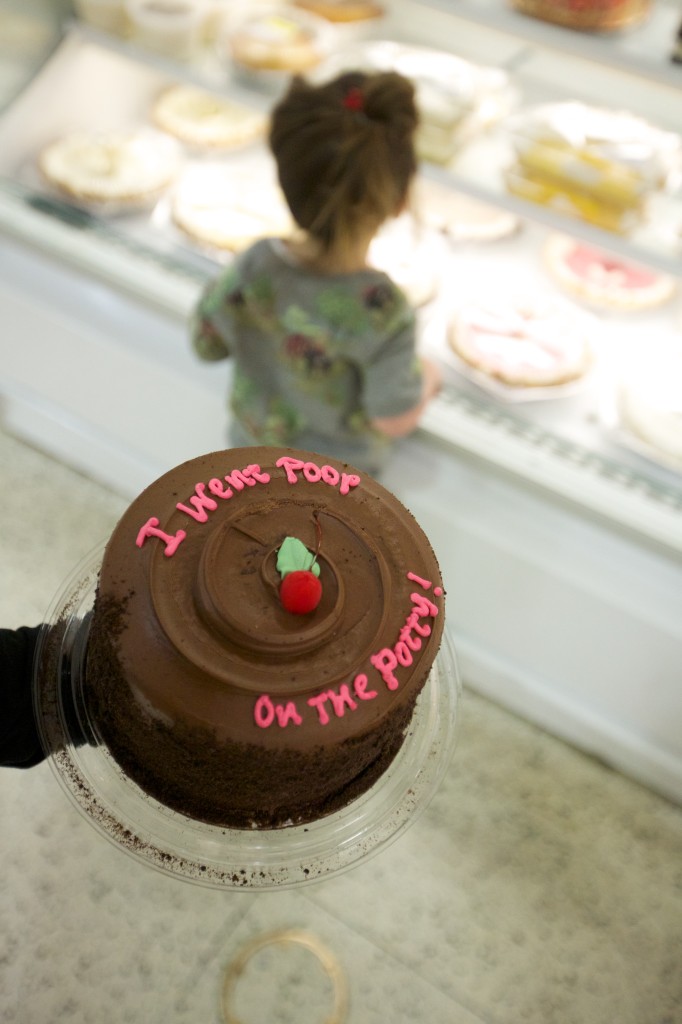 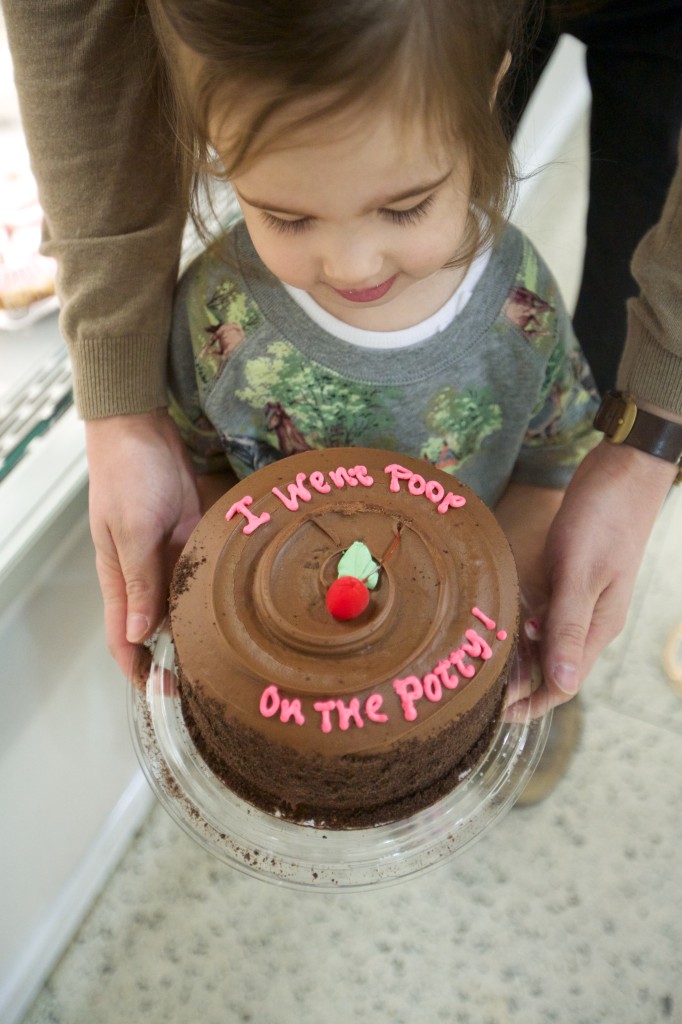 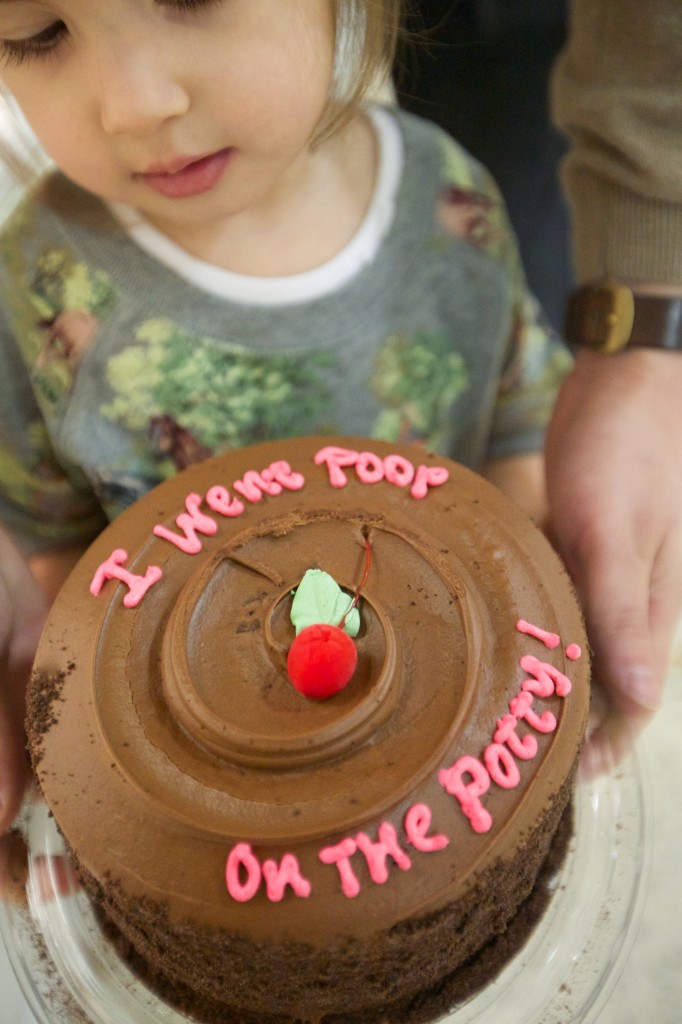 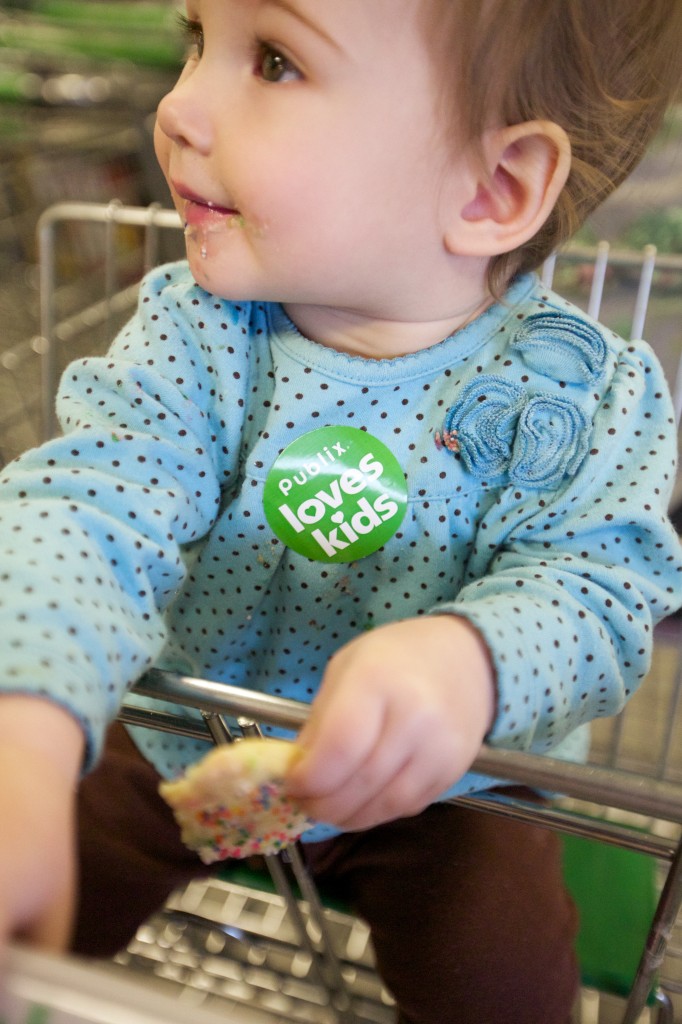 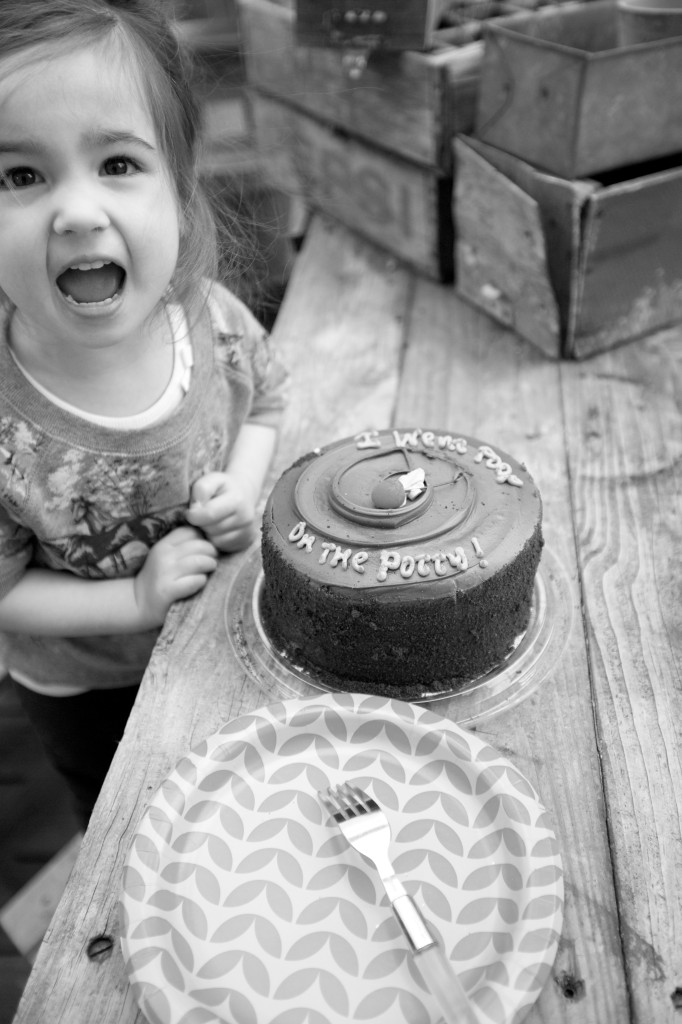 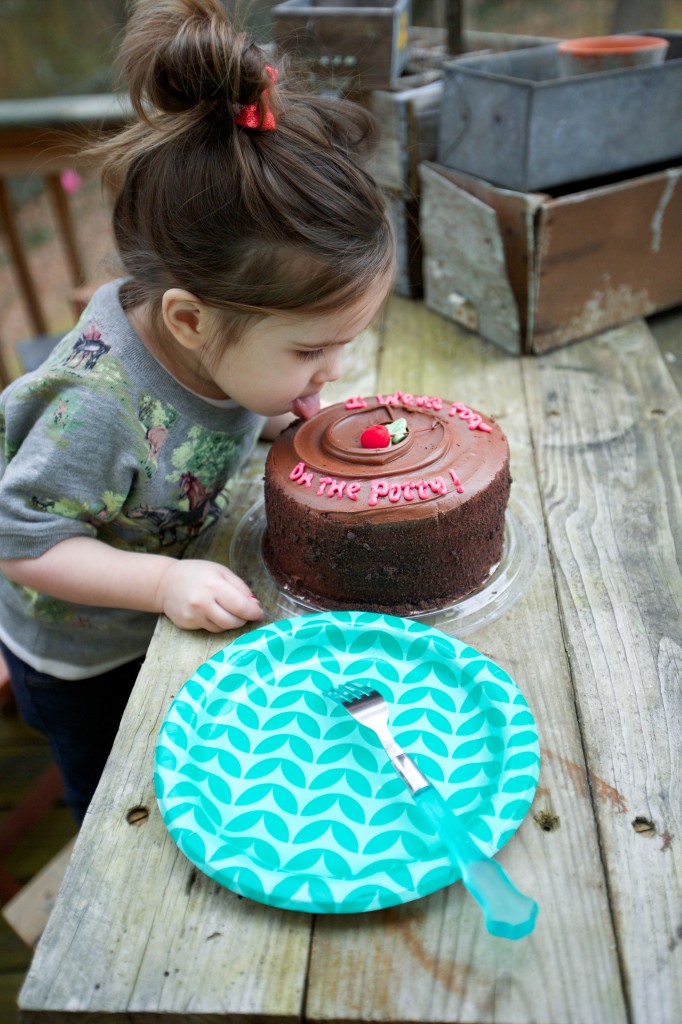 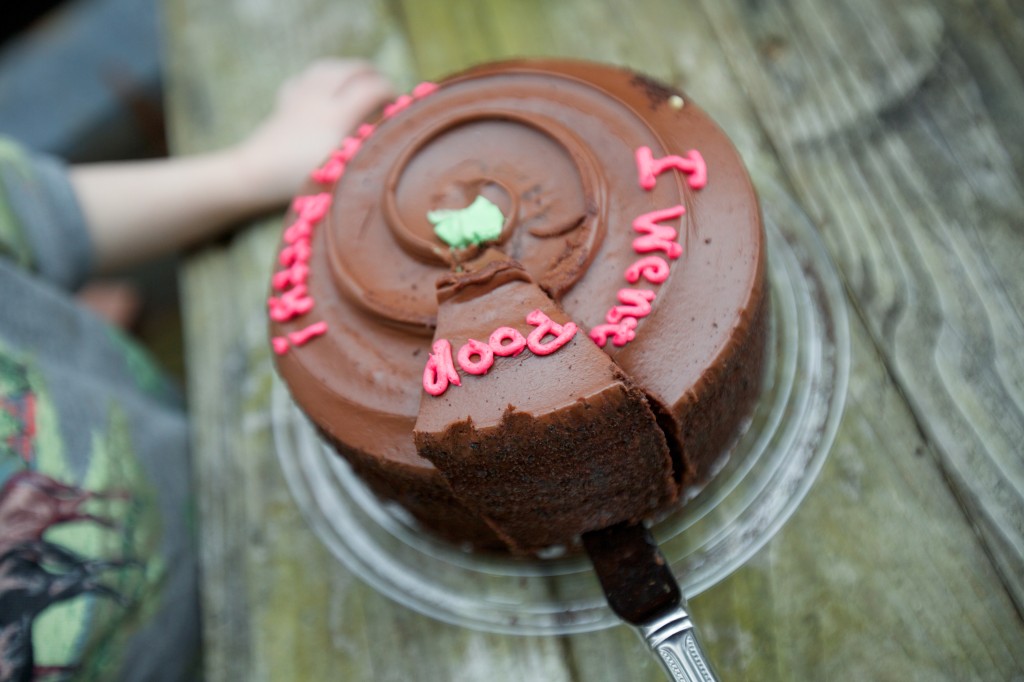 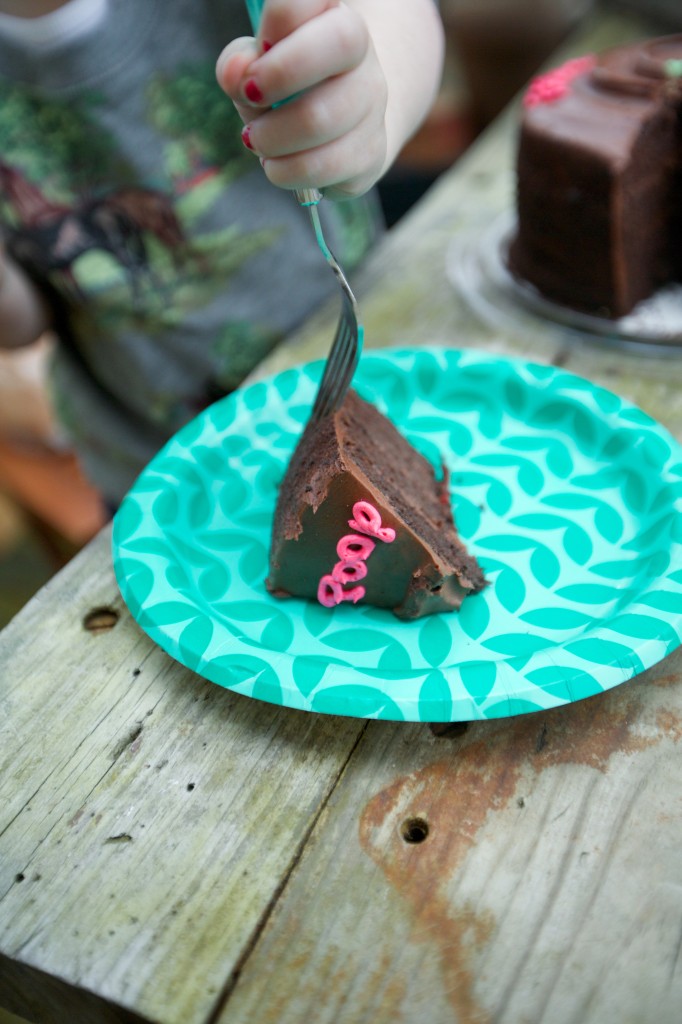 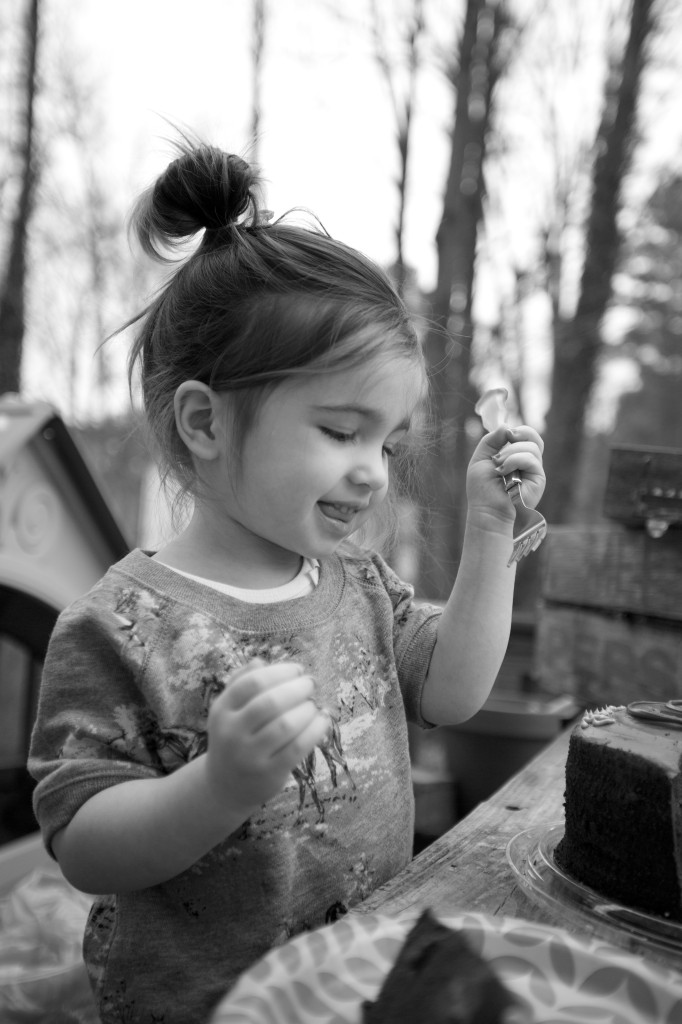 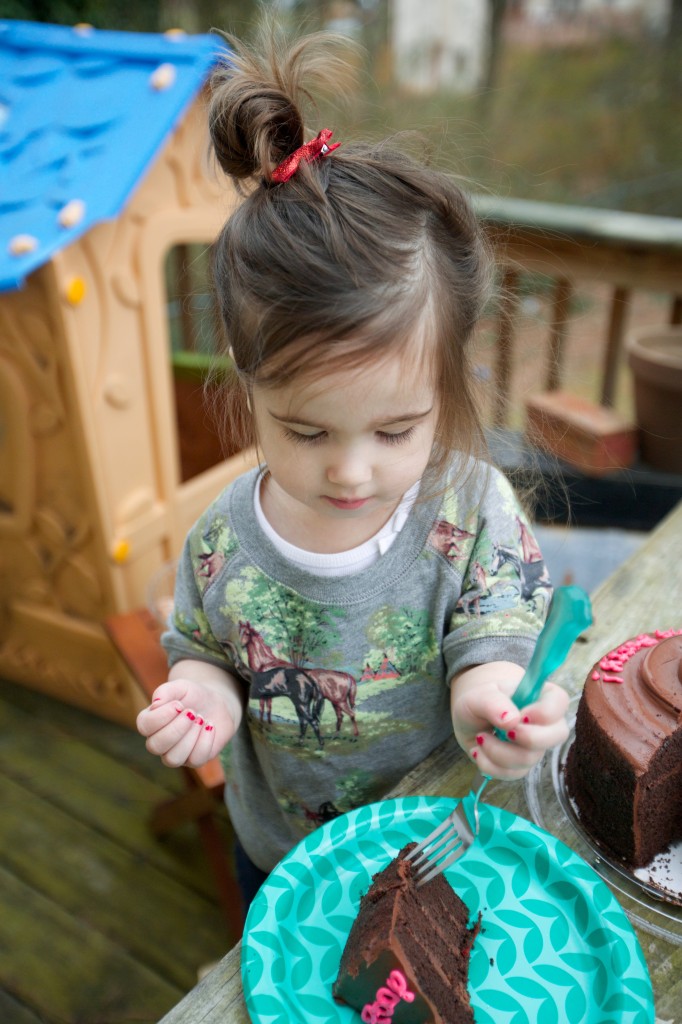 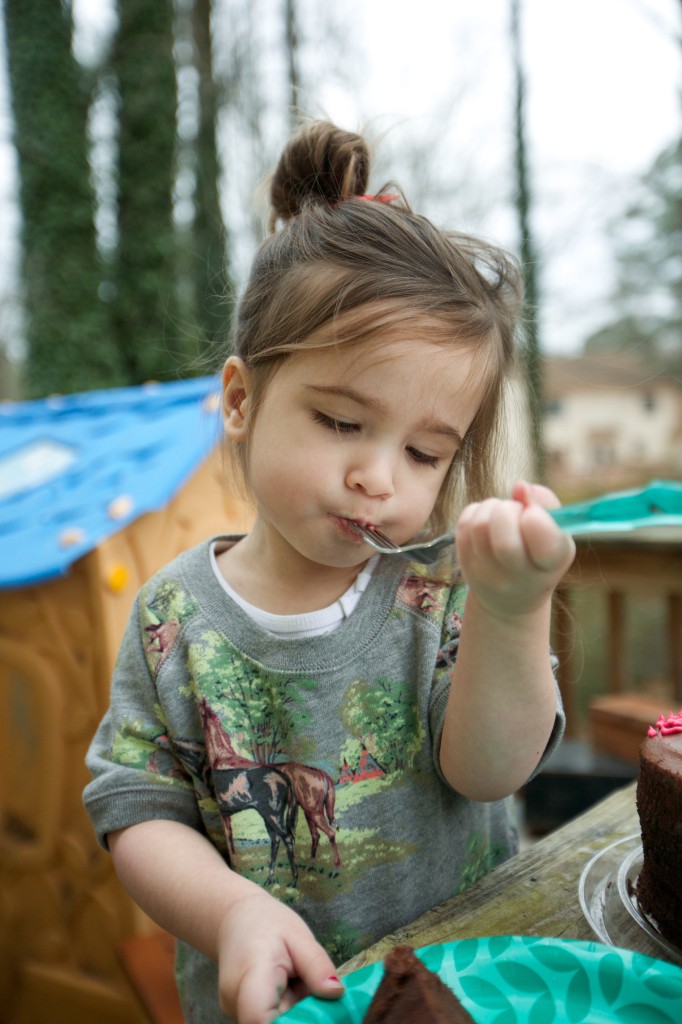 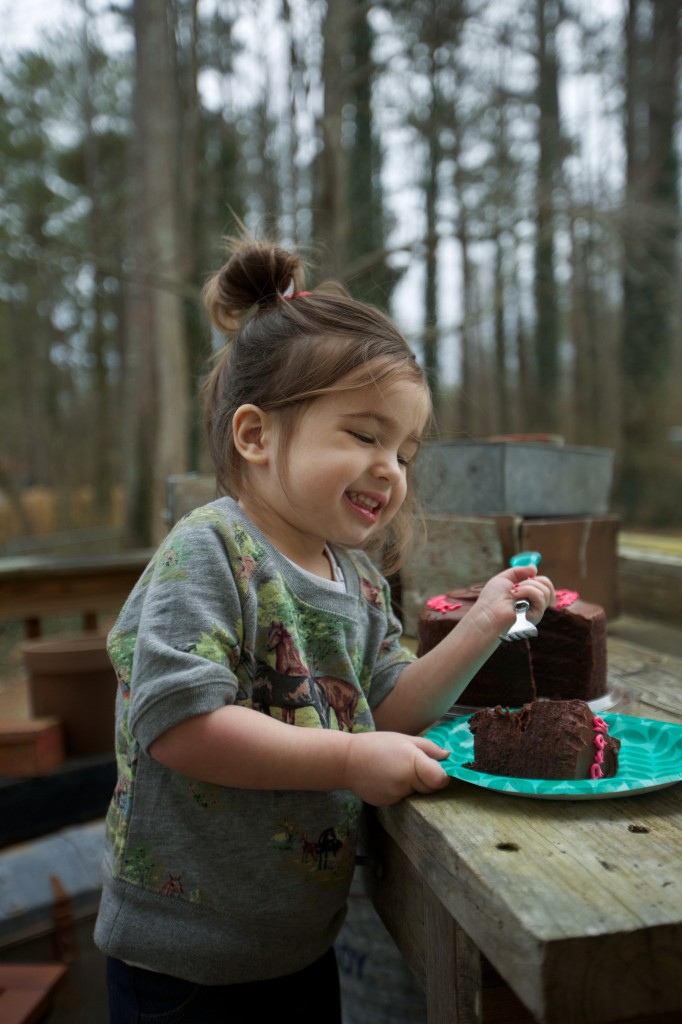 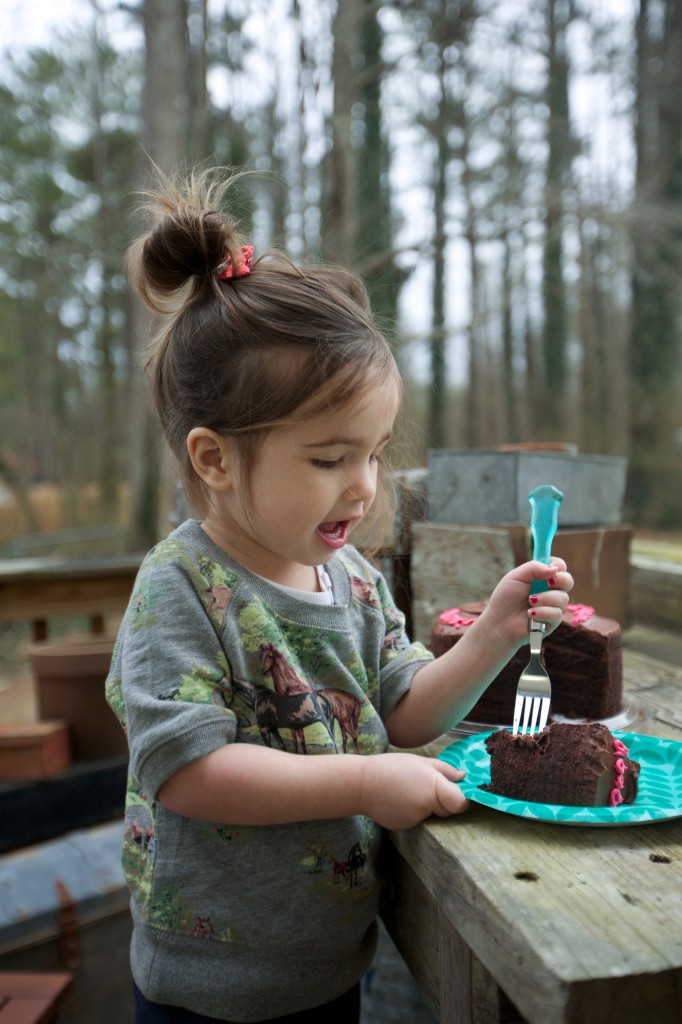 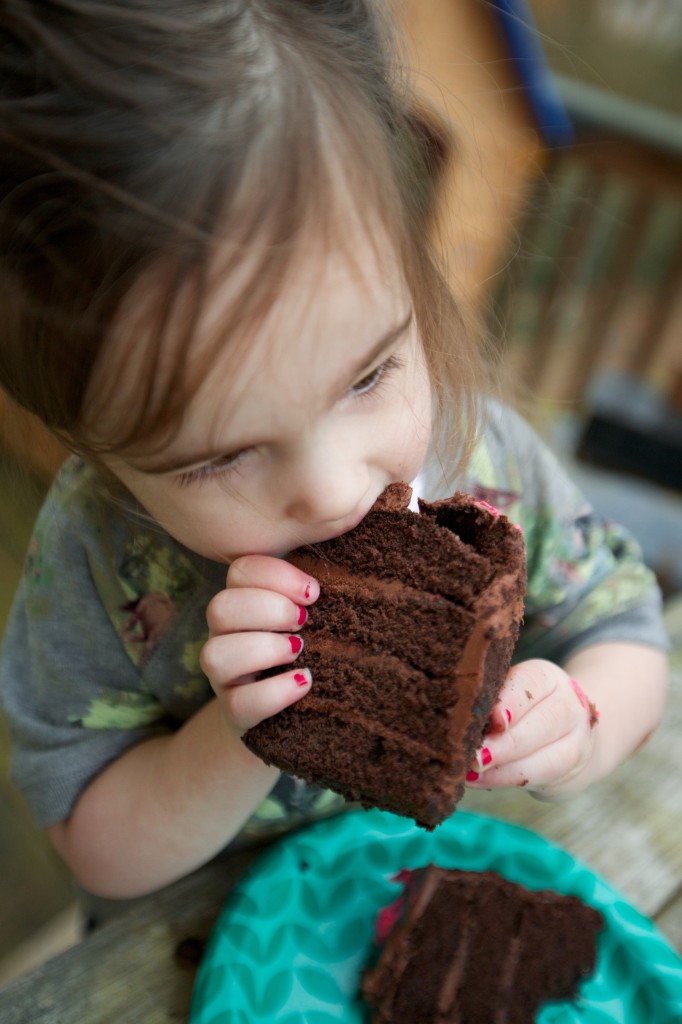 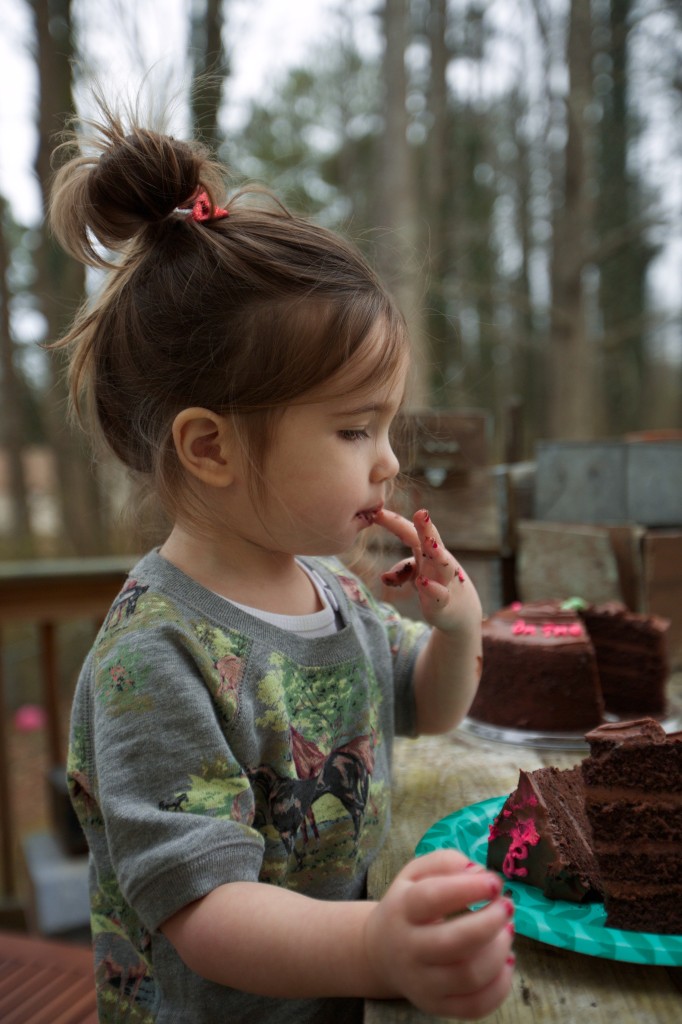