Warning: This confession is either going to appall and horrify you, or make you say, “Amen, sister!” Either way, let’s still be friends, okay? :)

I hate writing thank you notes.

Like hate-hate writing them. Like I’d-rather-do-ANYTHING-else-than-write-them-hate-them. Like please-don’t-give-me-a-gift-because-I’ll-have-to-write-one-hate-them. When I was younger, probably up through graduating college, I only wrote thank you notes when my mom forced me to; however, now that I’m an adult, a compelling guilt plagues me until I mail out thank yous in response to every small gift. It’s the worst feeling in the world to have unwritten thank you notes looming over your head. Grown ups out there, am I right or am I crazy?

This next statement is also probably going to get me lambasted, but since I’m having an honest moment, here it goes: I also kinda’ feel like formal thank yous are becoming a bit outdated. {gasp of horror} I always try to tell my friends NOT to write me a note when I give them a gift, especially if it’s received in person. The verbal, “Thanks a lot!” at a shower is enough for me. It’s a gift, and I hate the thought of someone lamenting over having to write me a note about it. For me personally, in this modern world, if a gift receiver emails, texts, Facebooks or verbalizes a thank you to me, I consider that more than enough. I know Emily Post’s ghost is going to haunt me for this confession, but I’m ready for etiquette to be modernized a bit.

With Emma Vance’s first birthday just behind us, I was dwelling on this concept of modern etiquette: How do I instill within my daughter the joy of expressing one’s gratitude but not create a negative association with the actual act of expressing gratitude? For me, writing thank you notes, especially as a kid, was a burden, and I don’t want that for Emma Vance. If she loves writing them as she grows up, then hallelujah! If she’s like the average person who dreads it, how can I help her, even at an early age, find ways of expressing gratitude that bring her joy?

I know she’s only a year old, but her birthday was the first non-family function where she really got gifts, and so the thought of what “modernized etiquette” could look like was bouncing around my brain. Then an idea came to me: She can’t write, but she sure as heck can play. And really, that’s what most of her gifts were about–toys to play with. So I decided that her thank you “notes” should fit the gifts, grabbed some paint and paper, and set to showing my one year old how to express true gratitude.

It was messy, but it was fun. Emma Vance was stripped down to her skivvies as she crawled around, scooted about, and rubbed her tiny little peach-and-mint-paint-covered hands all over the paper, creating her very first set of paintings. We laughed as she learned the hard way that eating paint is not enjoyable, but overall we just had a good time playing. What kid doesn’t like to get messy, right?

When they were dry, I put my motherly touch on the project, cutting up her big paintings into little cards. They will serve as her thank yous this year, and I hope they do the trick. I hope that she had a good time expressing her gratitude and that the receivers will get the message. If not, then I suppose next year we’ll have less thank you notes to write! Ha!

So, thanks Emily Post for the foundation and for the sentiment, but we’ve officially brought thank you notes into the 21st century. I hope you’re proud of us and not appalled, but if you are appalled, I look forward to receiving your formal rebuttal in the snail mail. ;) 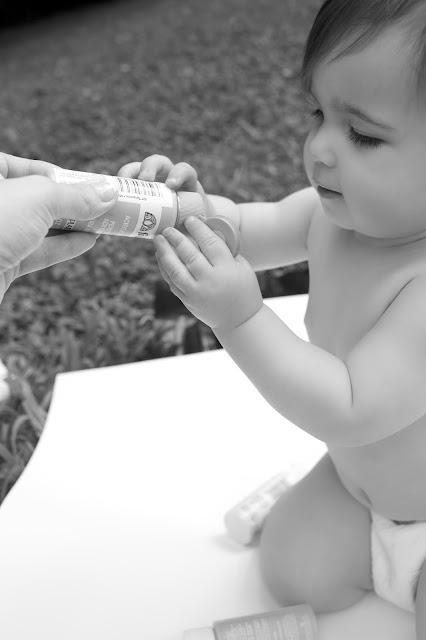 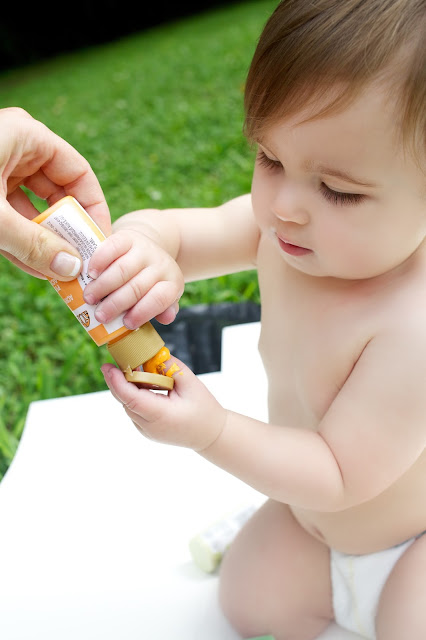 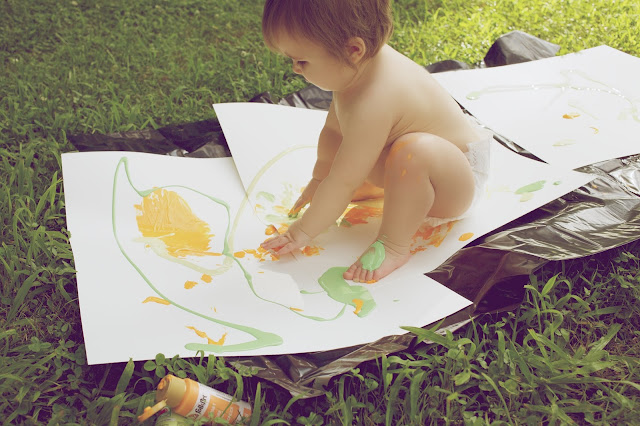 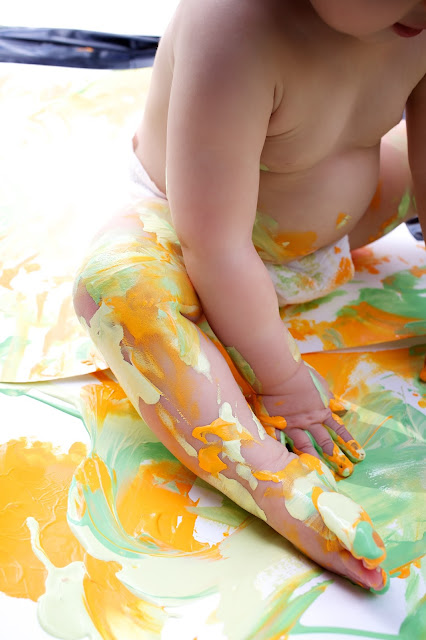 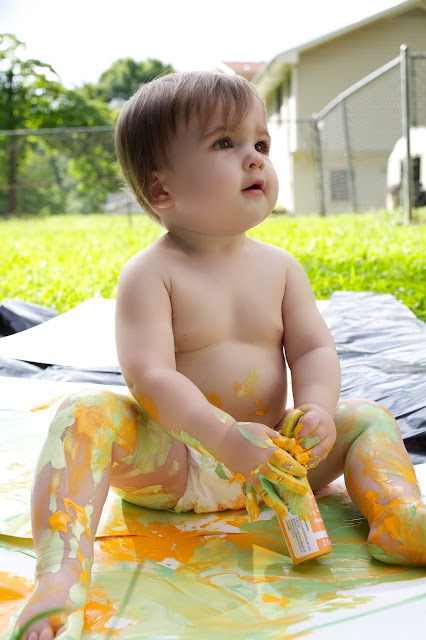 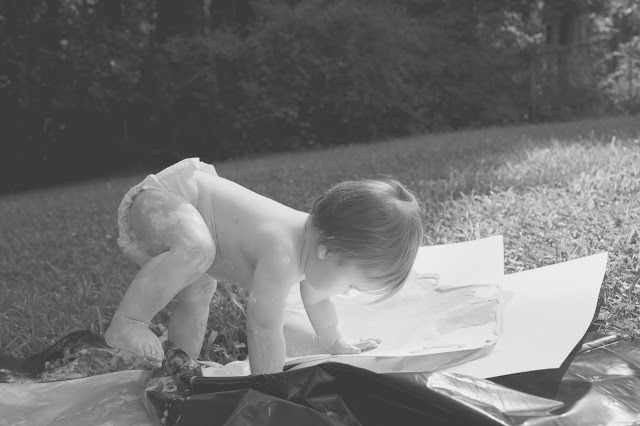 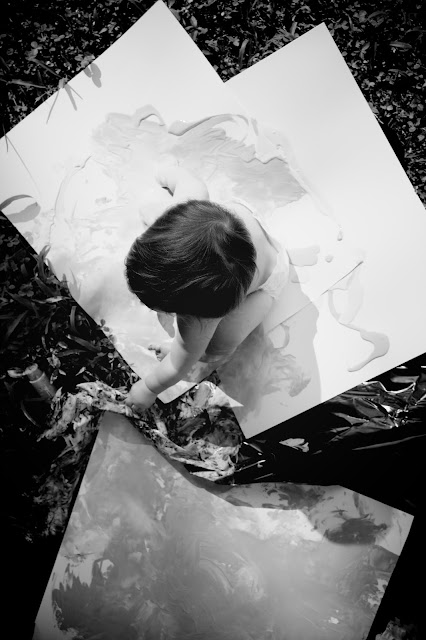 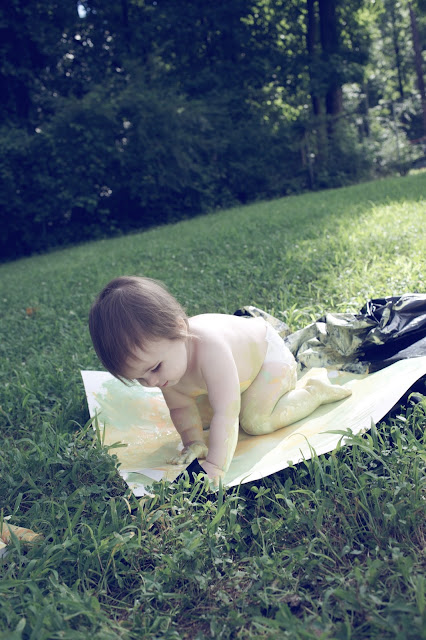 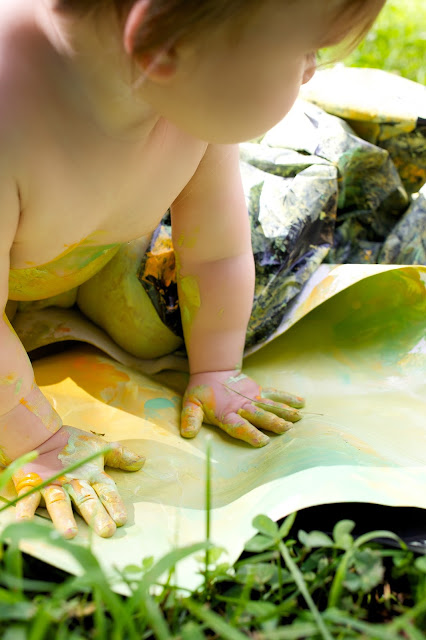 Oh, and don’t forget E.V.’s reaction to the whole experience (and her favorite word): “WOW!”