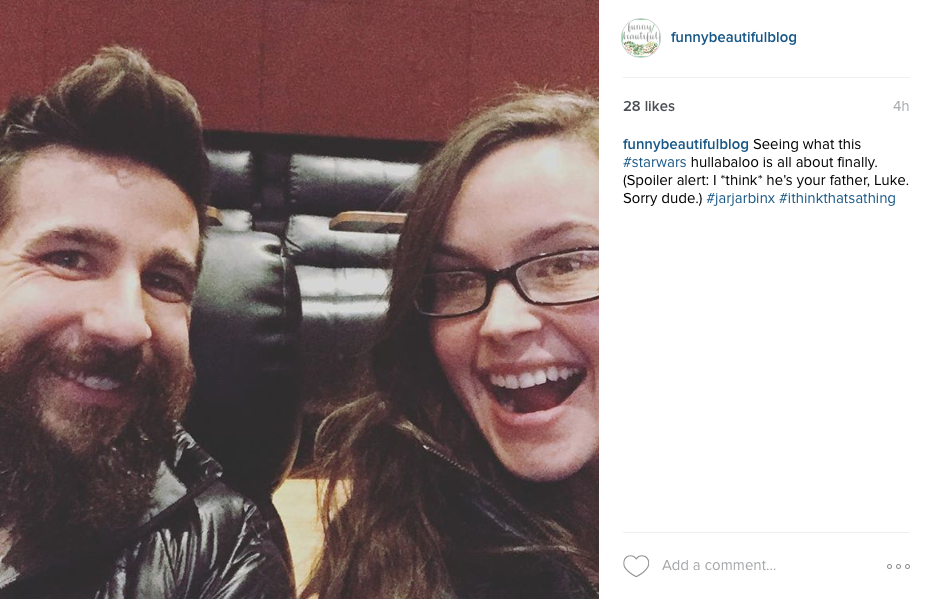 Tonight Ryan and I saw “Star Wars: The Force Awakens.” I’m a novice when it comes to Luke and Leia, one of the 1% of Americans who isn’t super familiar with the series beyond general knowledge. In fact, I’ve only seen “Star Wars” once. Let me just clarify a bit: I have seen “Star Wars,” like the real one, once. I got into a huge “Who’s on First”-ish conversation trying to explain that simple fact to someone tonight:

I’ve only seen “Star Wars” once.

Oh, you’ve only watched all the movies once?

No, just the old one.

No, just the first one once.

Yes, the first one.

So you didn’t even know who Han Solo was really?

Yes I did. I saw the first one.

So you saw Episode Four?

No, the first movie. THE Star Wars.

Which was the fourth movie…

No, the OLD one. Where they’re all young.

So you saw the one where Luke is a little boy?

No, he was an adult. He flew that ship thing in the trash shoot.

OH, you saw the first released movie, which is actually the fourth movie chronologically.

It was in middle school and it was being shown in theaters, so a friend of mine and I went. I was so excited; it felt like I was being let in on a piece of pop culture history. So I eagerly watched and waited…and waited…and waited. But the movie ended and Darth Vader never said, “Luke, I am your father.” I was so disappointed. SO disappointed. I felt gypped, and so I never watched another movie in the series ever again. (#truestory #scarred) Since it’s been about a million years since I was in middle school, I remember about 1% of the movie. (That 1% being something about a trash shoot.)

Overall, I loved the movie, and now I’m excited to watch the other ones. (Except I hear that apparently one of them is really boring and is all about Senate politics or something?) Anyway, two thumbs up. Even as a novice I picked up on a few of the nods to the original movies and understand how this new installment has so easily become endeared the world’s heart. For your enjoyment, especially if you’re waaaay into “Star Wars,” I thought I’d share my half of the conversation on the way home with my poor, laughing husband.

First of all, totally have always thought it was “Hans Solo.” Oops.

Why is it called the Millennium Falcon? Do they even have falcons in the future?

What’s up with the red shoulder on some of the Storm Troopers?

What about C3PO’s red arm?

The bloody handprint on Finn’s mask at the beginning of the movie— was that a reference to Bobafet? (Of whom my knowledge is this: red mark on mask + bounty hunter. Is Bobafet good or bad? He looks like a bad guys wearing good guy colors.) Ryan says a resounding “no.” Is it a reference to Wilson, then? LOTR bad guys maybe? Apparently a red handprint on your face means something in our society.

What does FN stand for? Do you think they’re in numerical order, like Finn was only the 2,187th Storm Trooper EVER?

Lady Vader — Brynn of Tarth from Game of Thrones, right? Do you think they killed her or let her go?

Where does the First Order get babies?

Apparently the FNs only get trained in guns and not sabers? Truthfully I’d rather have a laser gun than a saber. Yeah, light sabers are all lava-hot, but you can shoot a dude from far away with a laser gun. Just sayin’.

Why doesn’t the First Order invest in better white suits? Like bullet-proof (laser-proof? what is that stuff they’re shooting at each other? can you shoot out a laser beam?)? I’d always just aim for a hip or joint because that black polyester is not doing them any favors, FYI.

Does the length of the bad guy’s black helmet show how bad he is? Like Darth Vader’s was longer than Kylo Wren’s because he was worse?

Are there different styles of light sabers? What was up with that Renaissance-Fair of a saber Kylo Wren had?

What EXACTLY is a jedi? I get the general idea. They’re basically all blood relatives who can move objects with their minds, read people’s thoughts and make control people’s actions?

So there no jedis without jedis? That confused me. Did Kylo Wren kill all the jedis but Luke (and now Rey)? How many jedis are/were there?

Is Leia a jedi?

OH, and apparently LUKE is the one who loses a hand, not Vader? Totally misunderstood that. And, BTW, Luke’s skeleton hand is creepers.

Where was Yoda? (Oh, gosh, tell me he doesn’t die in another movie!)

I thought Darth Vader dies in a light saber battle, but apparently he melts? (And his grandson keeps his melted head in his room. Ew. But where did he get the melted Darth head? He wouldn’t have even been born, right?)

Do you know in previous episodes that Leia is knocked up?

Was that place with Maz the infamous Cantina everyone always jokes about? How did she get Luke’s saber? Are light sabers like Harry Potter wands, where they’re really only for the real owners?

(I was proud that I knew what an tie fighter was, but had to ask about the good guys’ planes, which were aptly named x-wing fighters. Creative.)

The elephant-y machine walker thingies (which Ryan informed me were for the bad guys, even though they seem like good guy vehicles to me; who doesn’t love an camel machine?) weren’t really in this movie, but Rey lives in a dead one, which intrigued me. But she tries on an x-wing fighter helmet, right? Weird.

How do you think Rey ended up with such a killer accent while living on such a hillbilly of a planet?

Who is that Asian guy who’s in the Resistance, and what else was he in that I can’t place him? Arg!

So apparently the costume designers of Harry Potter basically stole Darth Vader’s look. All I could see once Kylo Wren took off his helmet was Snape. R.i.P.

Who was this Supreme Commander dude, and why is he the baby of Voldemort and Gollum?

If Kylo Wren has the force but the other commander dude is just normal, how come they’re equals? Shouldn’t the force win out always? (Do I have to capitalize “The Force?” Is that like a respect thing?)

So Kylo Wren and Rey are cousins? Is that what the “thing” was?

What is the First Order actually fighting for? They want everyone to be orderly and uniform? And everyone else wants to dress casually? So basically this is some weird post-cold war commentary on communism v. democracy?

No wonder the First Order failed. They thought it was wise to put the trash man on the front line.

And, finally, why is Han Solo my dad? Like, literally. Why did Harrison Ford model his character after Donald “The Donald” Aquilio? A crabby curmudgeon who hates pretty much everyone. And they look uncannily alike (minus a few lbs. on the Ford end of things). Does that make me Talie Wren, heir to the dark side?

Hope you enjoyed reading my lack of knowledge as much as I enjoyed the movie. On to the first six episodes (or whatever the proper way to say that is)!