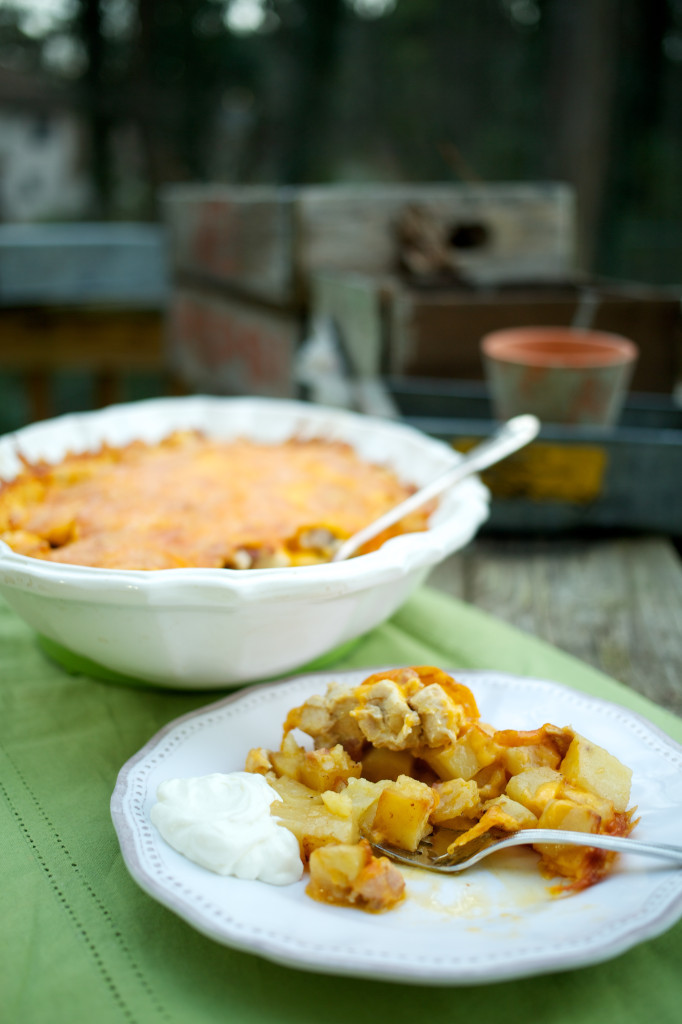 It’s about to get really cold in Atlanta, y’all. And I mean really cold. Think below freezing, which in the South basically means ” EVERYONE FREAK OUT!”

While the masses are busy stocking up in case we get that panic-inducing quarter-inch of snow tomorrow, I’m eager to share this hearty recipe I attempted. It’s perfect for wintry nights because, well, it’s basically man food, which means it’s yummy, heavy and served hot. :)

Before I get to the actual recipe itself, let’s just say that the following cooking experience should perfectly exemplify why I’m a terrible cook. In some strange twist of fate, though, it just so happens that in this case my shortcomings added up to a delicious meal. Score!

I saw this yummy-looking recipe for Loaded Baked Potato and Chicken Casserole on Pinterest, and since Ryan is a manly-man when it comes to food, I thought he’d like it. It scored low on my “healthy” scale but high on the “easy” scale, so I figured it was worth a try. When I got to Whole Foods and tried to pull up Pinterest to look up the ingredient list while I shopped, however, for some reason I could not for the life of me find the pin! Arg. So I improvised, using my mental snapshot of the casserole to discern what was in it…and that’s where my terrible cook habits took over.

Notes to Myself, The Terrible Cook:
1. Who tries to buy ingredients for a recipe without actually looking at the recipe first? Terrible cooks. Note to self: You can’t actually see every ingredient that goes into a final product.

2. If you can’t find the recipe that you’re looking for, Googling what you thought the recipe might be called is a waste of time. There are a million recipes with the exact same title. (I suppose chefs use their creativity elsewhere than naming their dishes.)

3. Talie, please read the directions in their entirety before starting a recipe. Seriously. And when I say “read,” I don’t mean “skim.” Sometimes the bacon is supposed to be cooked before you add it to the casserole, and, yes, that makes a difference.

4. Even though you and your husband have opposing tastebuds on many food items (onions, chives, carrots, mushrooms, broccoli, cauliflower, spices, etc.), sometimes he won’t even notice if you just add whatever green thingy he thinks he hates to the dish. I mean, really, how else will you get the boy to eat a veggie?

5. It’s about time to release the ghost of Amityville (i.e. the one that makes your 1980s oven totally unreliable as far as temperatures go) from your kitchen. Call your landlord and complain. Stop trying to outsmart the appliance and just get it fixed.

Needless to say, I lost the recipe, bought the wrong ingredients, misread the directions, left out the only vegetable in the whole dang dish in order to please Ryan and almost overcooked my casserole. All of that to say, though, and {drumroll, please} it was delicious! I know it’s a good meal when Ryan voluntarily brings up a recipe in conversation post-dinner and calls it “awesome.” :) The biggest oops I had (not pre-cooking the bacon) left the entire dish tasting divinely bacon-esque, so much so that we renamed my Talie version “Loaded BACON Potato Casserole.” :)

Let’s just say that how yummy this ill-fated dish turned out did NOT help to reign in my terrible cooking habits. Hey, if it worked to my advantange once, who’s to say it won’t again next time? Ha! Although my finished product didn’t resemble the lovely Pinterest picture, the idea was the same and the rate at which we devoured it proved that even mistakes can lead to a delicious result. Now if only we had the leftovers to keep us toasty through the next few days as we bear the seemingly unbearable temps, we’d be happy campers… ;)

This recipe is from Food.com. 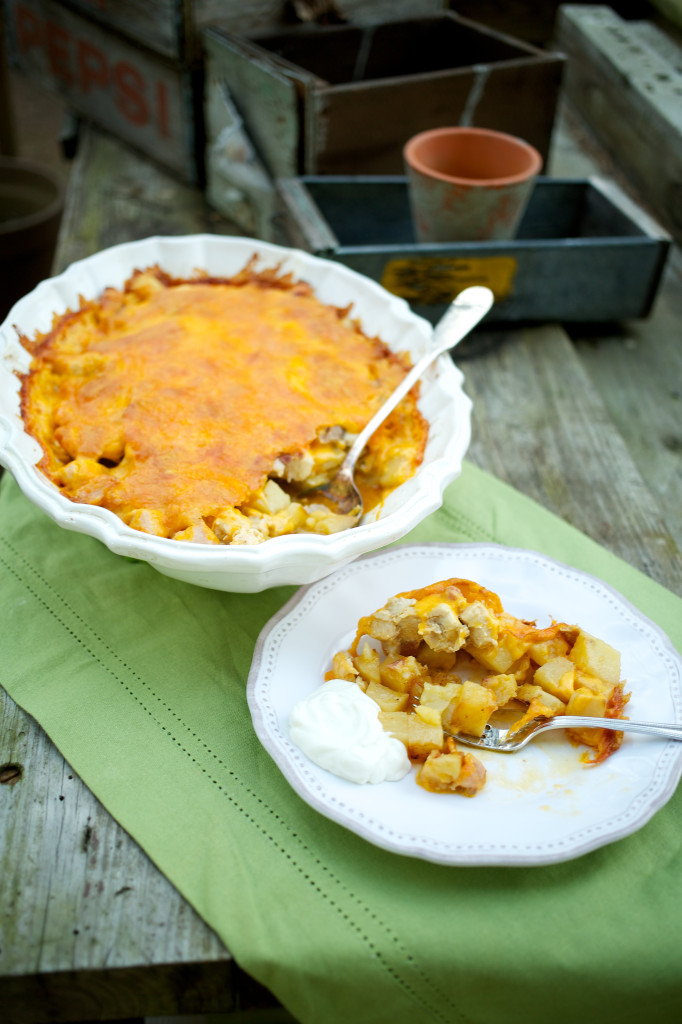