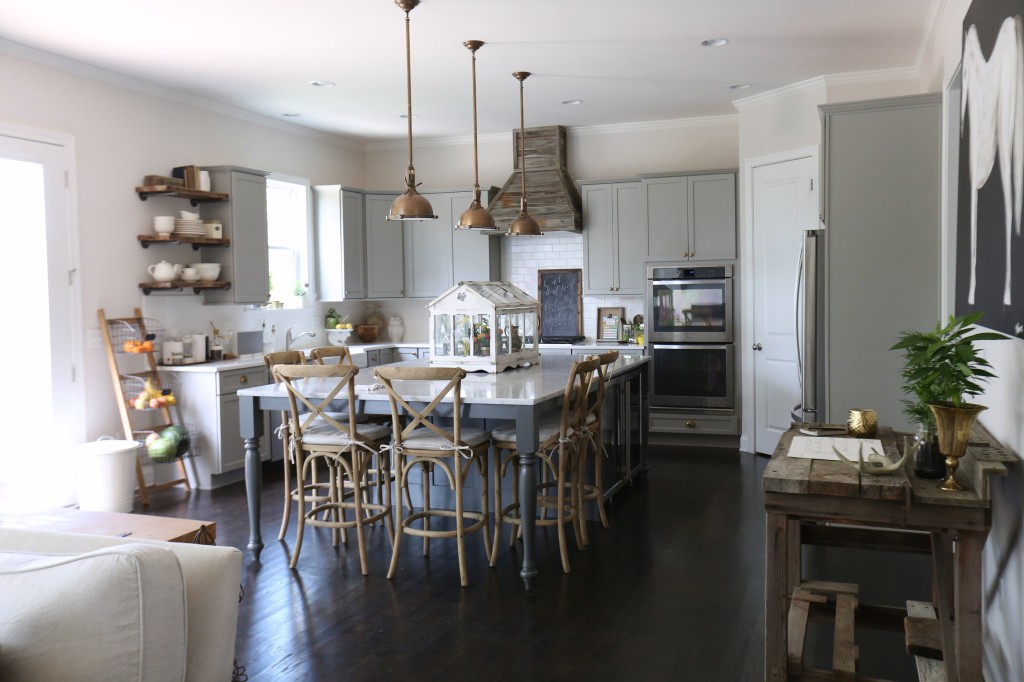 First of all, let me just say — I wish my kitchen was this clean all the time! It’s the nucleus of our house, so it gets used and abused, and it seems that no matter how much time I spend cleaning it up, it never seems to stay that way for long. (#motherhood)

When we built our house, the original plans called for an island that was about 4’x3′ or so, with additional space for a traditional kitchen table in between the kitchen and the living room. When we priced out the cost to upgrade the cabinetry, paint it, upgrade the countertops, extend the size just a bit to allow stools to be stored under the edge, add legs to give it some character…let’s just say that it was EXPENSIVE. Instead Ryan and I opted out of the island (getting a small, and I mean SMALL reimbursement back into our design budget with the builder) and decided to add a giant island afterwards. Best decision ever.

Ryan’s friend from high school, Wes Ivey, owns I&C Construction, so while our house was still a drywall-less shell, we brought in Wes to help us create our dream island. There were a few bumps in the road — I chose tiiiny legs that had to be reordered; the paint color had to be custom-made by Sherwin-Williams because we are OCD to the max (it’s called “Shove Island Gray” and, yes, you can get it at any SW location now); and that slab? Well, it’s literally the biggest piece of marble possible, and it’s the second biggest single piece the counter company had ever installed. The end result is a dream, though, and worth all the energy! (And, BTW, the WHOLE island cost about the same as upgrading the smaller, non-custom original island through the builder. Booya.)

We spend so much of our life at that island, so it’s definitely one of the most important features in our home. We opted to nix a kitchen table in favor of it, and a year later I’m still pleased with our decision. We can seat 6-8 comfortably, it streamlines the look of our kitchen, and it gave us a few extra feet of walking space right where our backdoors are. (Win-win-win!)

Here’s the details of our kitchen design: The perimeter cabinets are shaker-style with SW Dorian Gray paint. (Thanks to Sarah Wade’s great recommendation!) We chose Dorian because the other grays we tried out read either too yellow or too blue in the changing daylight/twilight. If anything, Dorian reads beige, which was the best option for me. (Geez, gray! Can’t you just be gray? Apparently not.) The counter is Cambria (which we chose for durability) White Cliff (which is pure white without any speckles, which we chose for uniformity and to make the island pop). I wanted to do the backsplash with plank-style tiles, but when the design center lady looked at me like I was crazy and Ryan voted “no,” we opted for super-safe white subway tile. I insisted on white grout so that it wasn’t too busy. The island cabinets were made to match the existing perimeter ones, but I chose a turned leg to bring in more of a farmhouse vibe as opposed to a simple shaker leg. As I mentioned, the paint is SW Shove Island Gray, and the counter is honed carrera marble. The marble is gorgeous, but it does scratch (which I don’t mind) and we’ve had to reseal it once already (and it’s ready for another re-seal). The sealant has a lifetime warranty, but I find that it gets dull spots very easily. However, I would choose the beauty in spite of the maintenance over again if given the choice.

After we closed, we DIYed the open shelving. We planned for it while building by nixing the upper cabinet on the end. We only did a small section because we want to enjoy the trend while it’s “in” but don’t want to regret foregoing all upper cabinetry in a decade when we sell. We also began with bronze light fixtures over the island and nickel hardware, knowing we could replace both once we moved in. (The bronze pendants we saved for finishing our basement, and the nickel hardware is stashed away for one day, once again, when we sell.) We opted for aged brass for the lighting and pulls, which I love the look of. It warms up our gray cabinets in my opinion. We had also planned for building a wooden cover over our vent hood, so we got a smaller vent and left extra space on either side it during the cabinet install. We had our carpenter construct this AMAZING vent hood for us out of some leftover fencing we stole from our old neighbor’s fire pit. (Literally.) We actually used some of those fence sections to make welcome signs for Emma Vance’s first birthday party, and when the hood was complete, I was surprised and thrilled that you can see some of my painted lettering inside the hood if you look up into it. (Plus $0 for materials is a big bonus!)

On the wall between the kitchen and the dining room I’ve set up what’s supposed to be a work station. (Ryan disapproves of my farm table in that spot, but for now I’ve won that battle.) Truthfully, though, it ends up being The Place All Things Land instead. Our mudroom is unfinished still, so I figure when we get around to building it out that we’ll have a proper place to drop all our stuff, but for now my workstation is more of a junk station. I’ve been dyyyyying to have a big ol’ black and white painting of a horse on the work station wall for the past year, but once I realized how much it would cost me, I decided that I could do it myself. (Not too shabby, right? And it cost me 1/10 of the price I would’ve had to pay.)

I try to not make my kitchen too cluttered, but I really just enjoy vignettes a lot. (I blame Lindsay Stanley for that!) As a rule I’ve tried to at least maintain neutral decor, and as the “stuff’ creeps in, I try to manage it with a clear head, haha! I have reserved that the terrarium on our island can be fun and not neutral, so I change it up seasonally. (Right now we’re enjoying our summer-y cacti.)

I’ve been waiting to share our kitchen, truthfully, because we still have to-dos on our list. The main two are:

1. Change out that upper corner cabinet to be a glass inset and make that Ryan’s coffee corner. (Notice his little set-up currently under our open shelving.)

2. Makeover our pantry. We have the traditional white wire shelves in our pantry, but we’d like to update it to match the open shelves. We’re also planning on replacing that door with a black frame with a glass inset. (So many DIYs, so little time!)

Once we cross those two items off our list, I’ll be okay to rest a bit. ;) 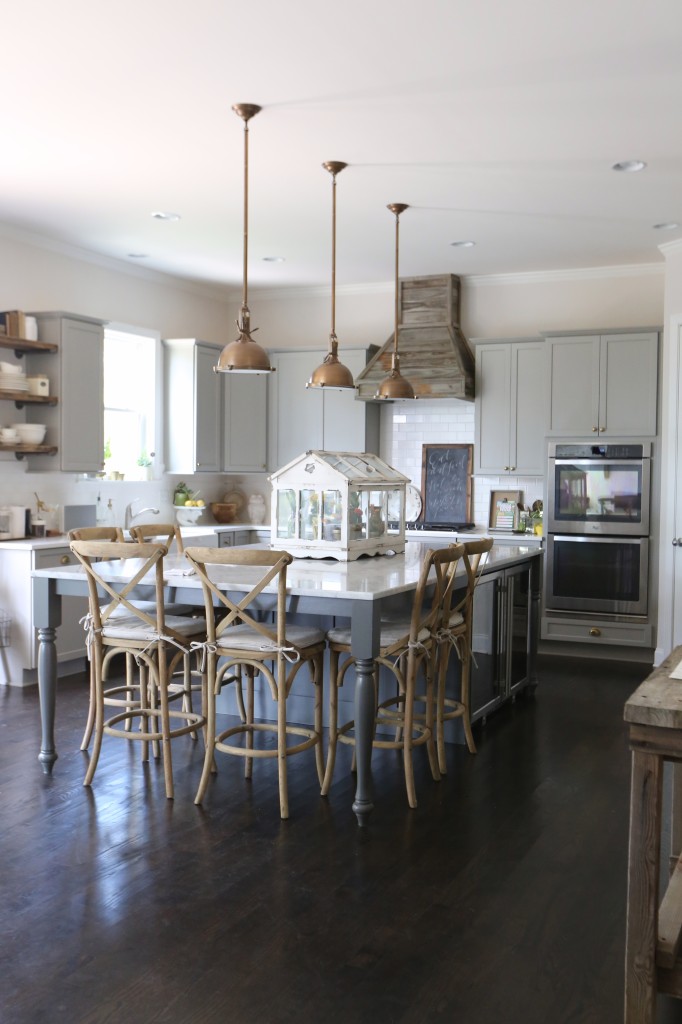 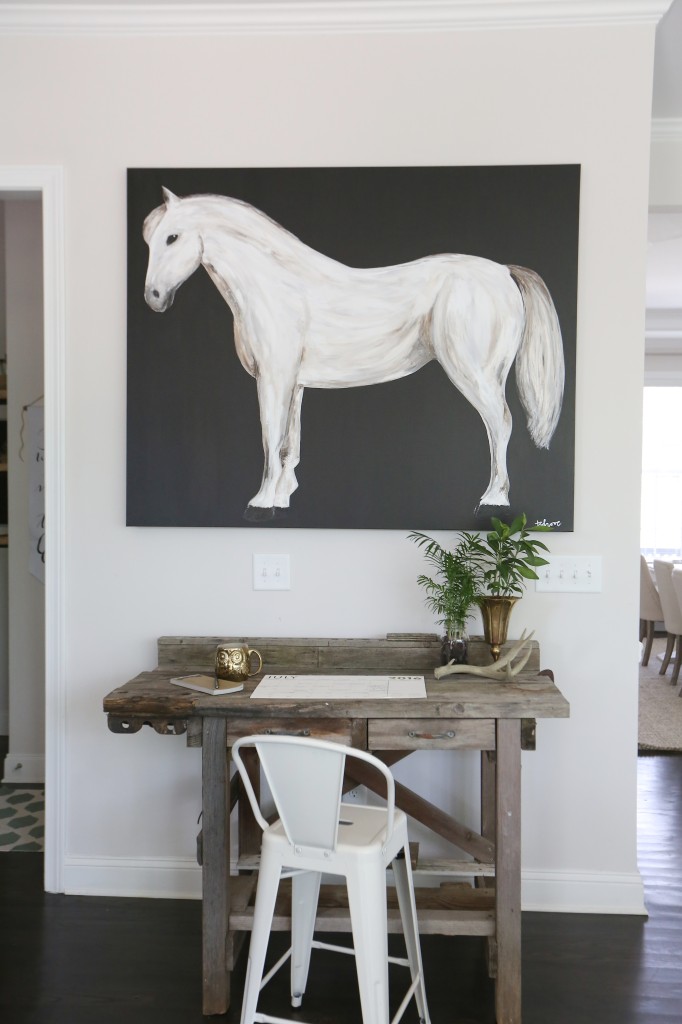 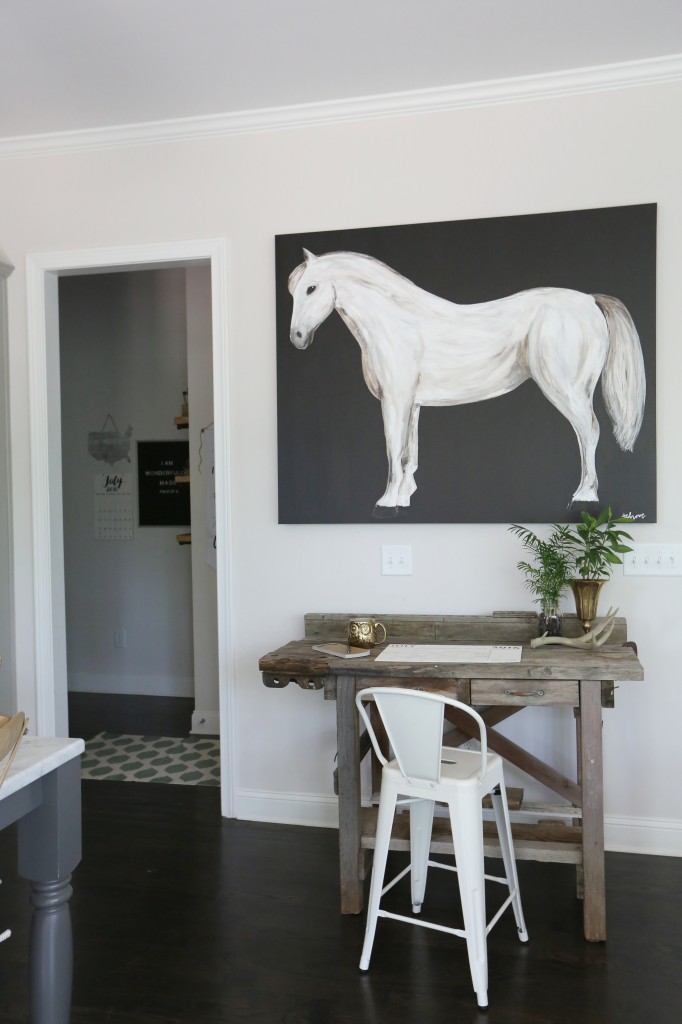 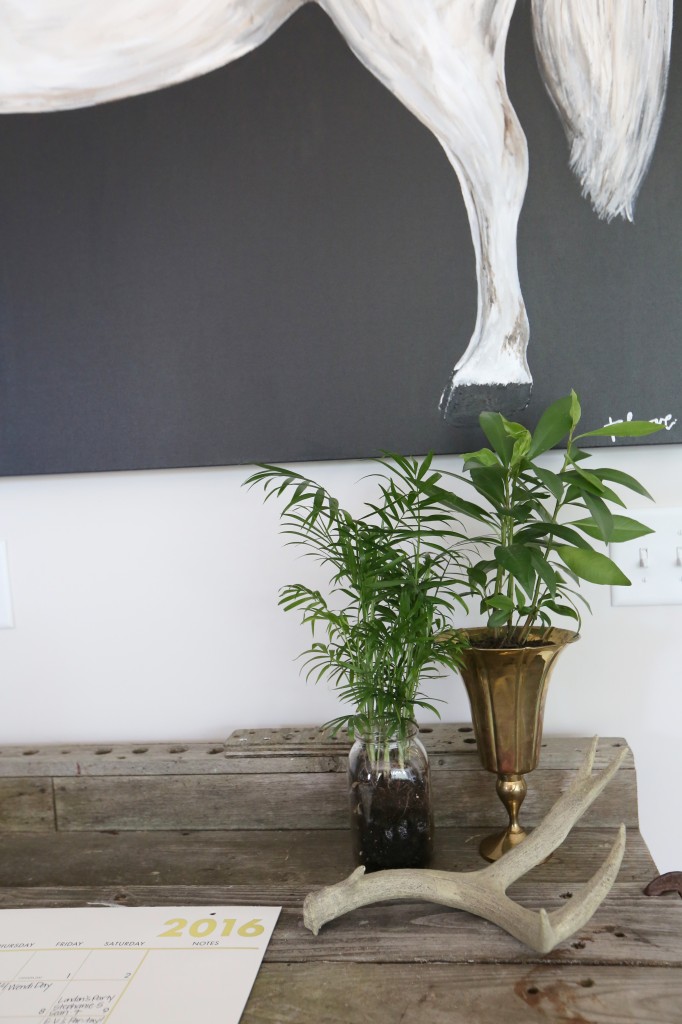 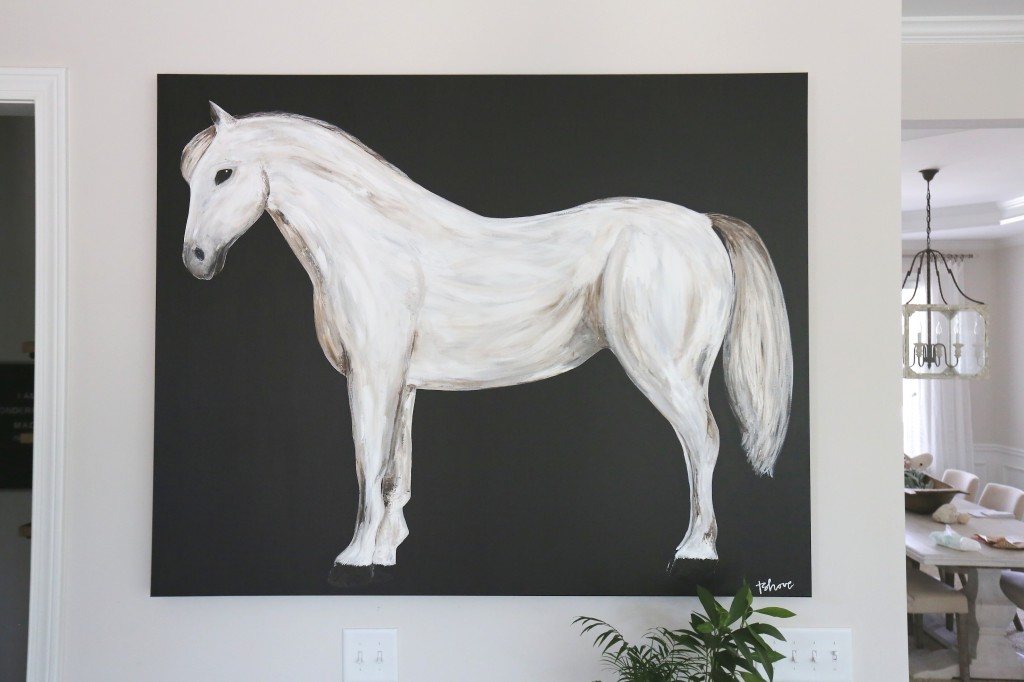 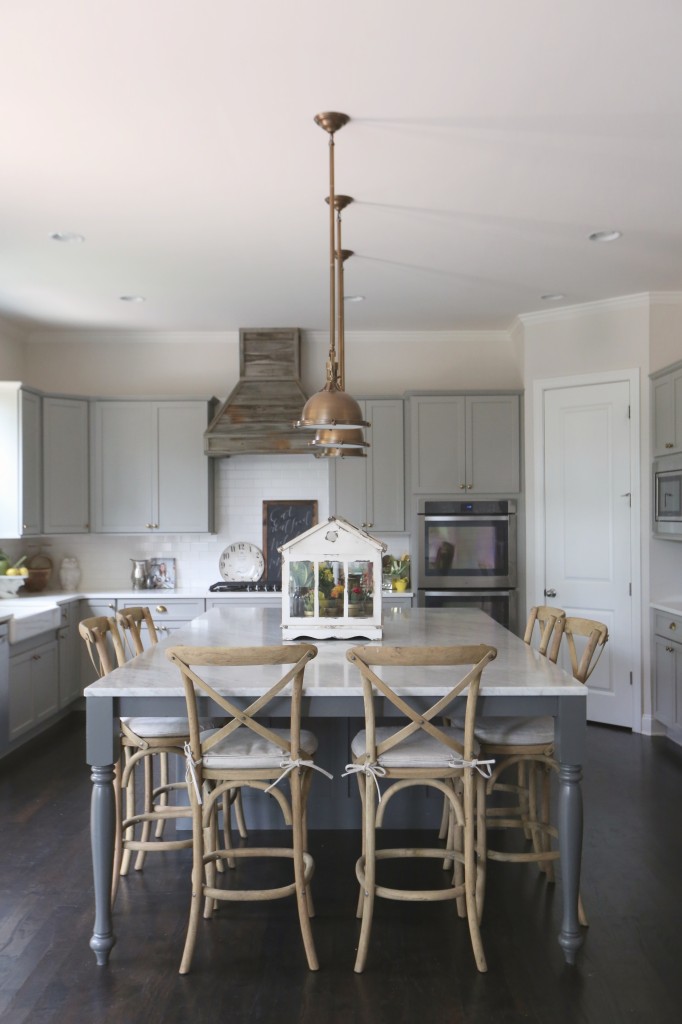 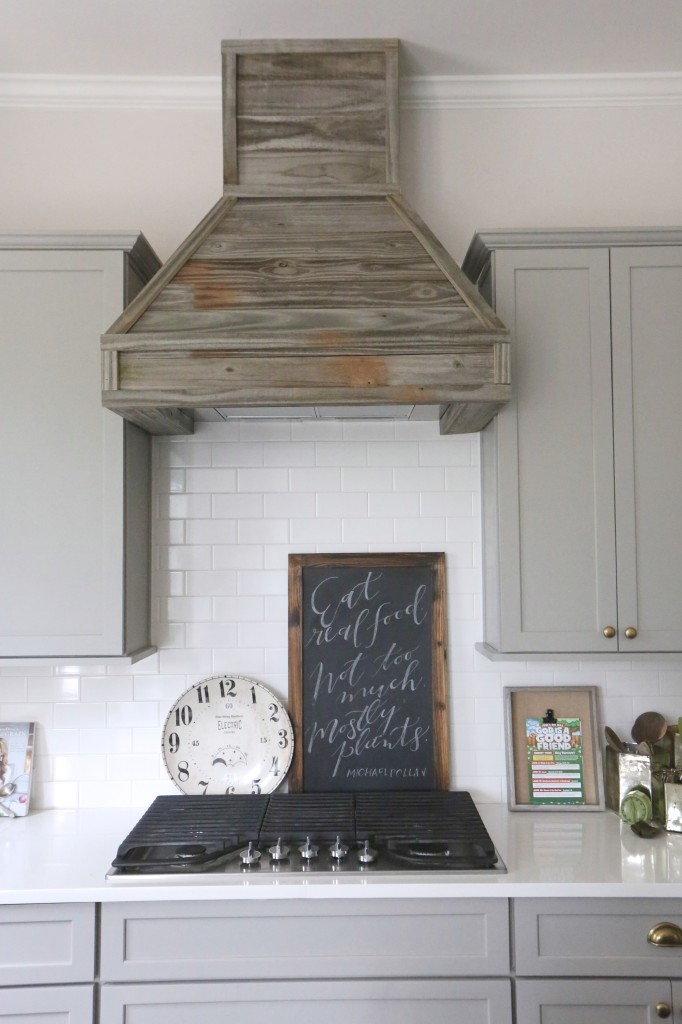 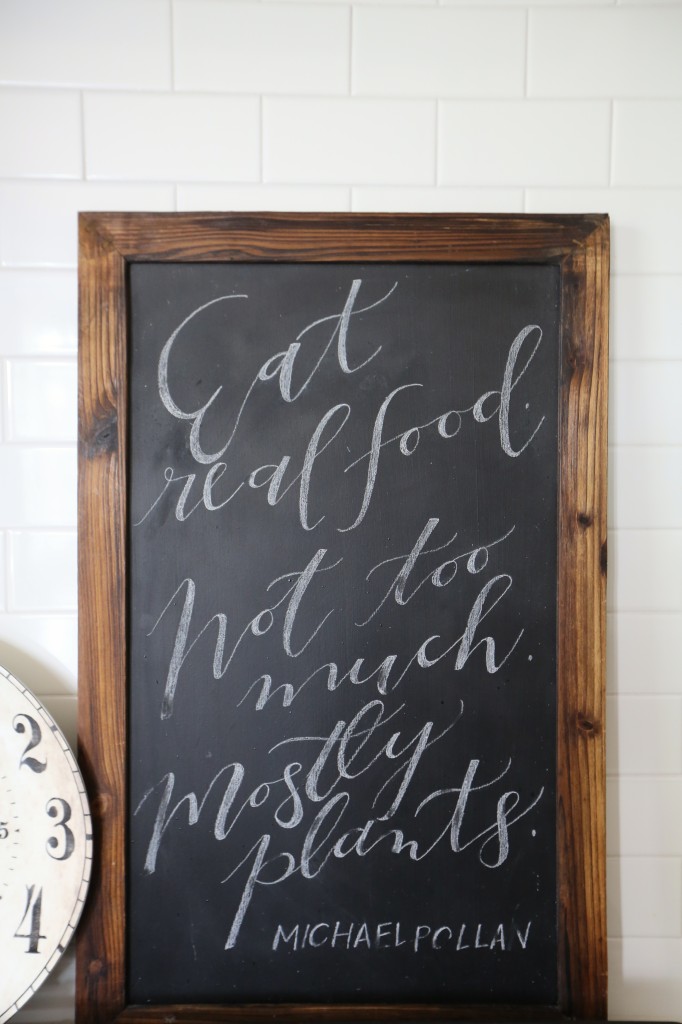 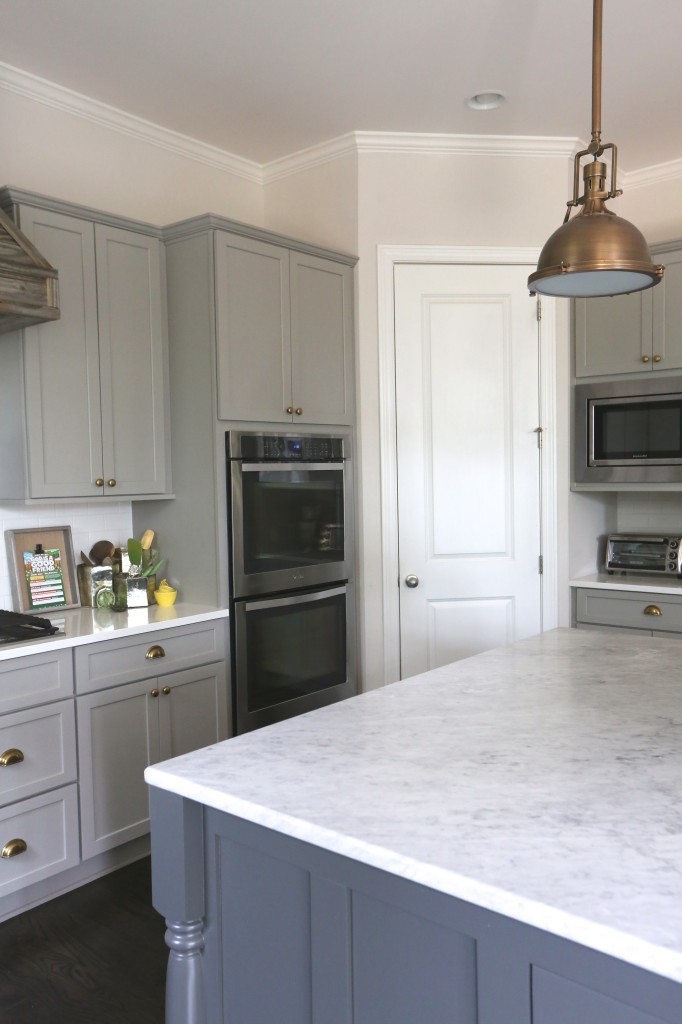 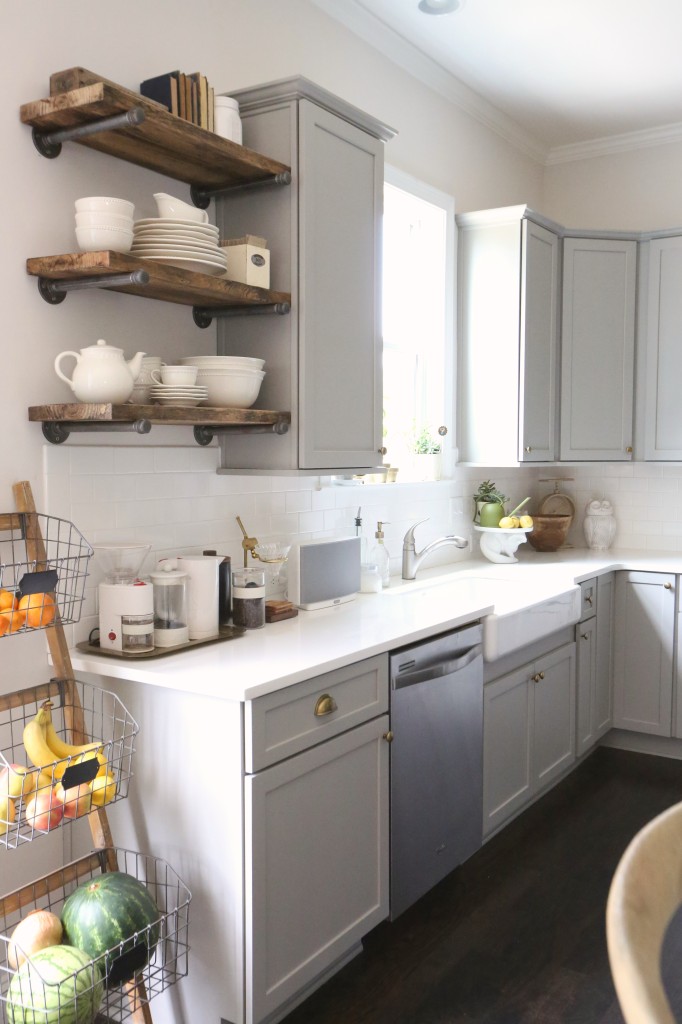 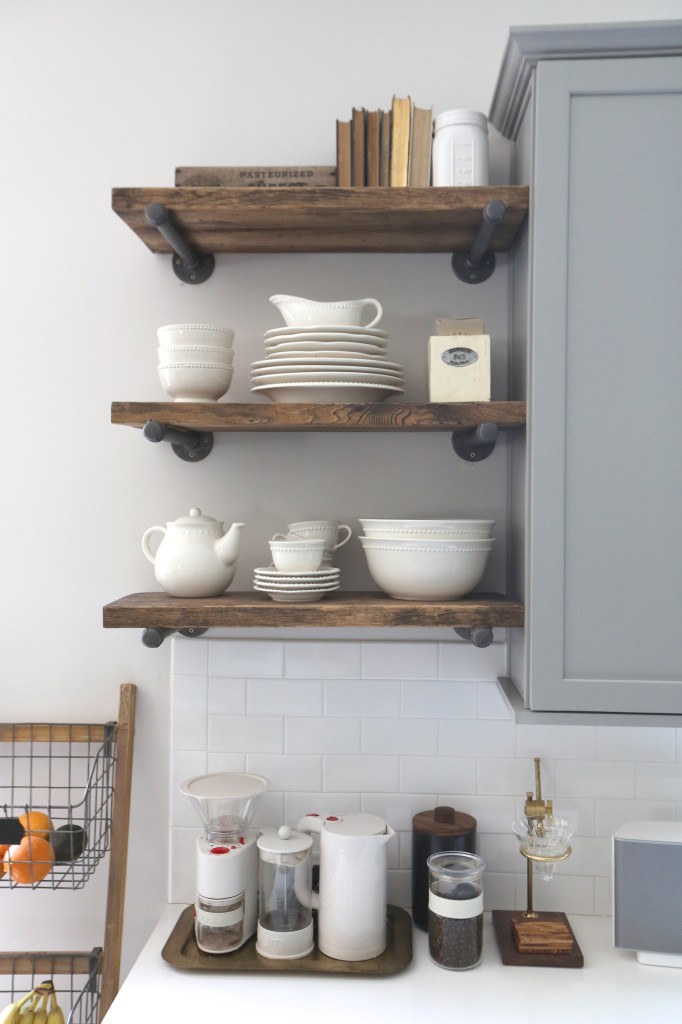 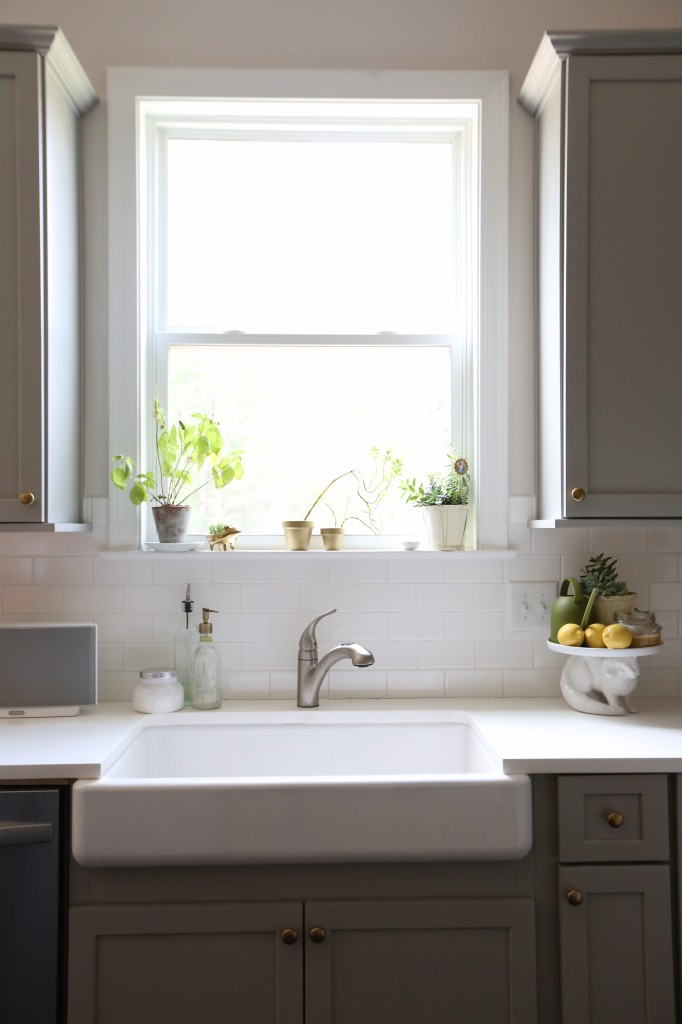 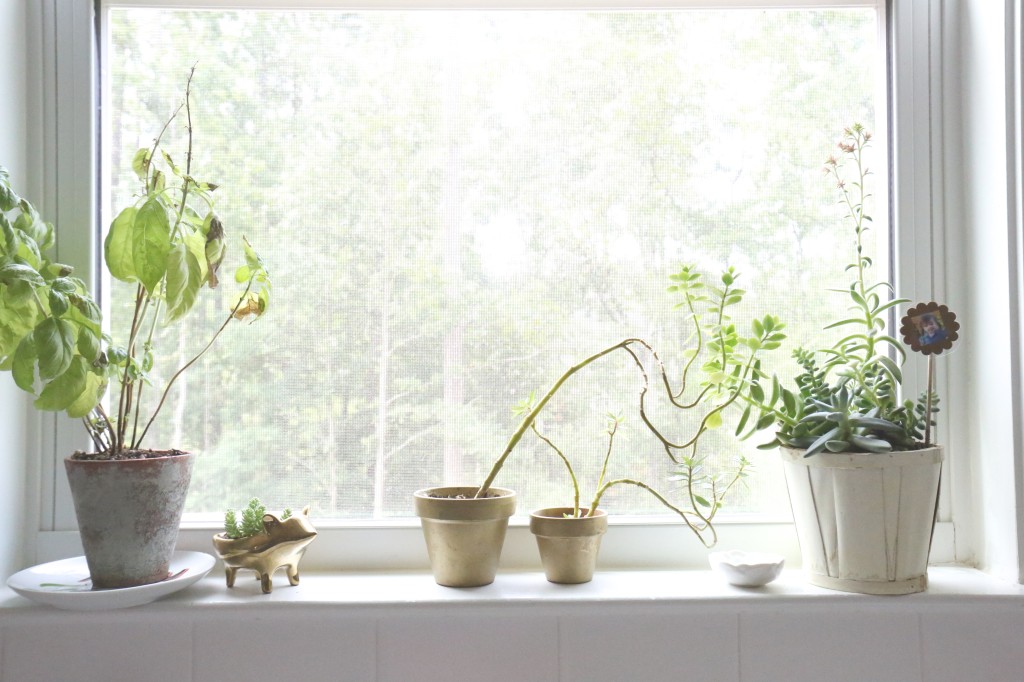 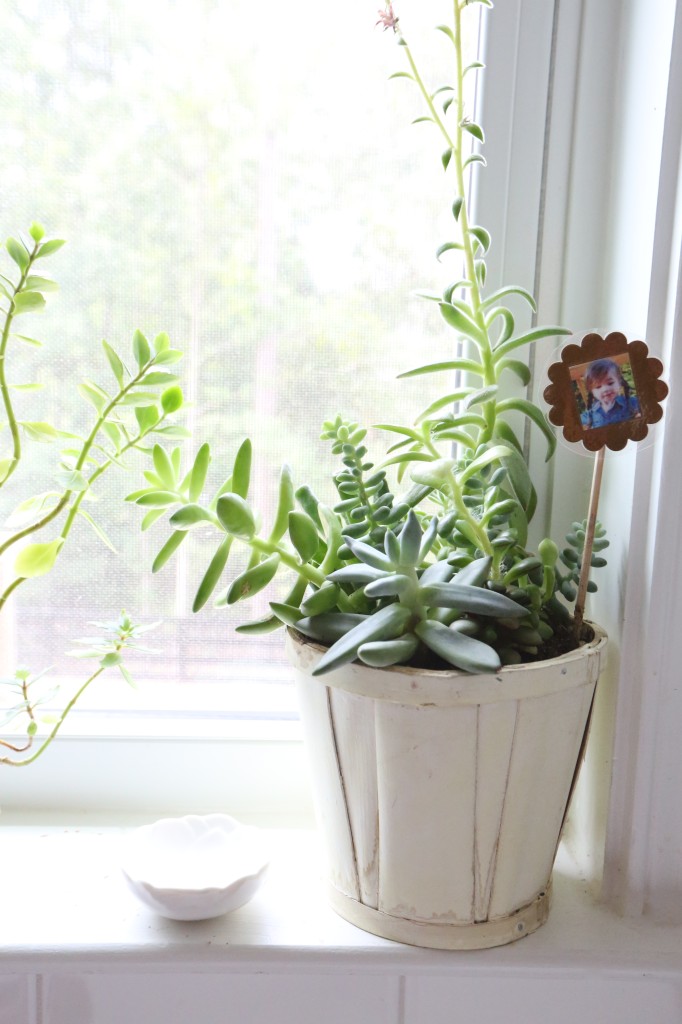 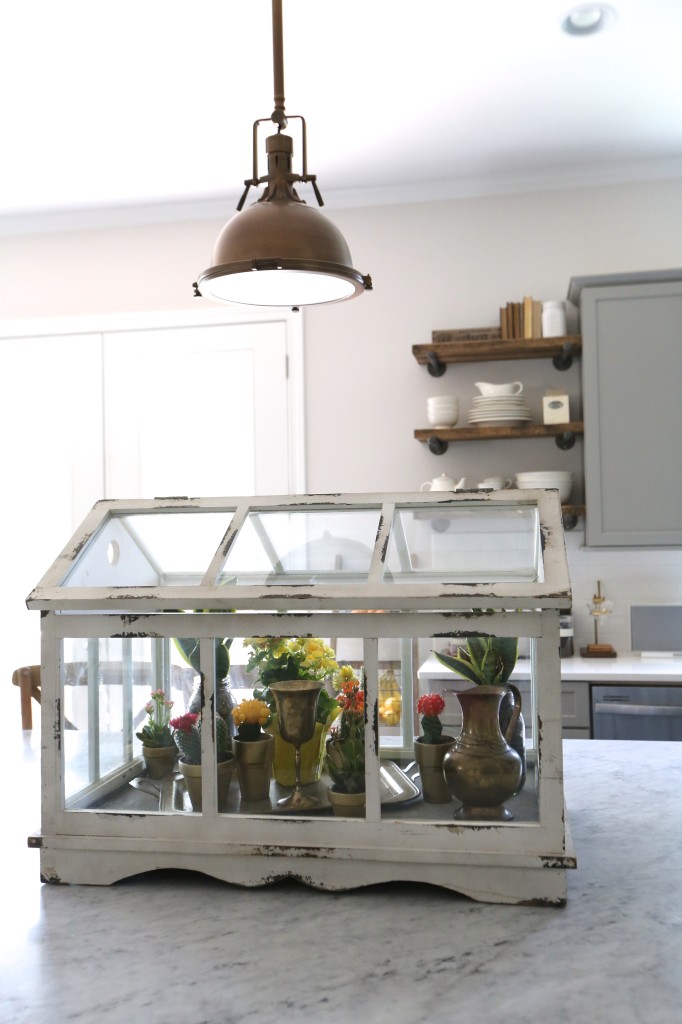 Here are some pics of our terrarium from the Spring, which was filled with leftovers from Cricket’s Birds and Berries birthday party in March: 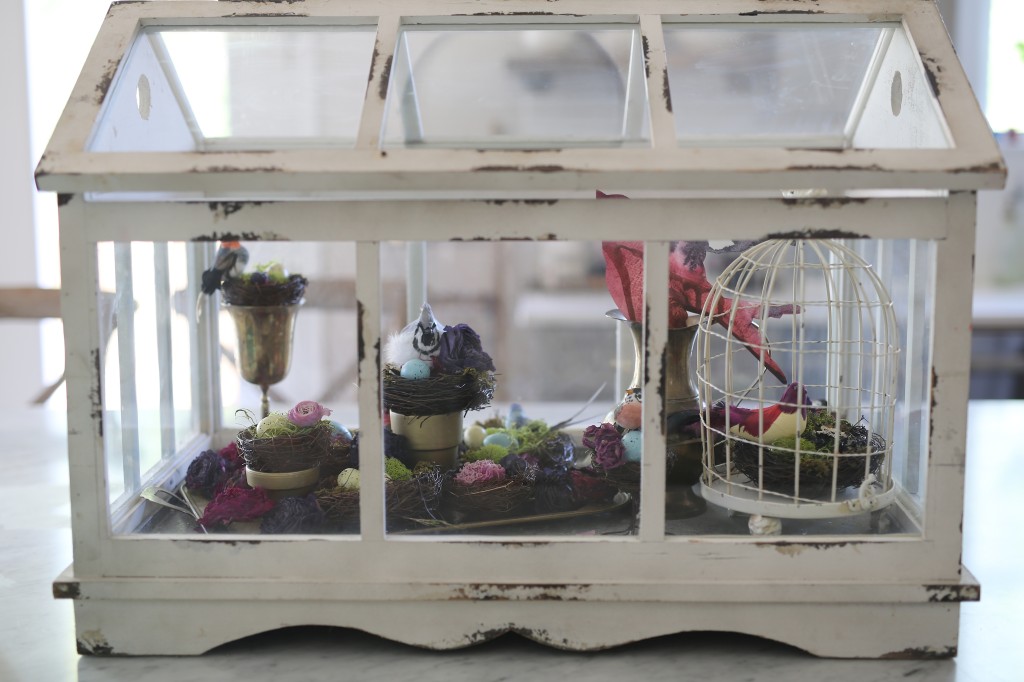 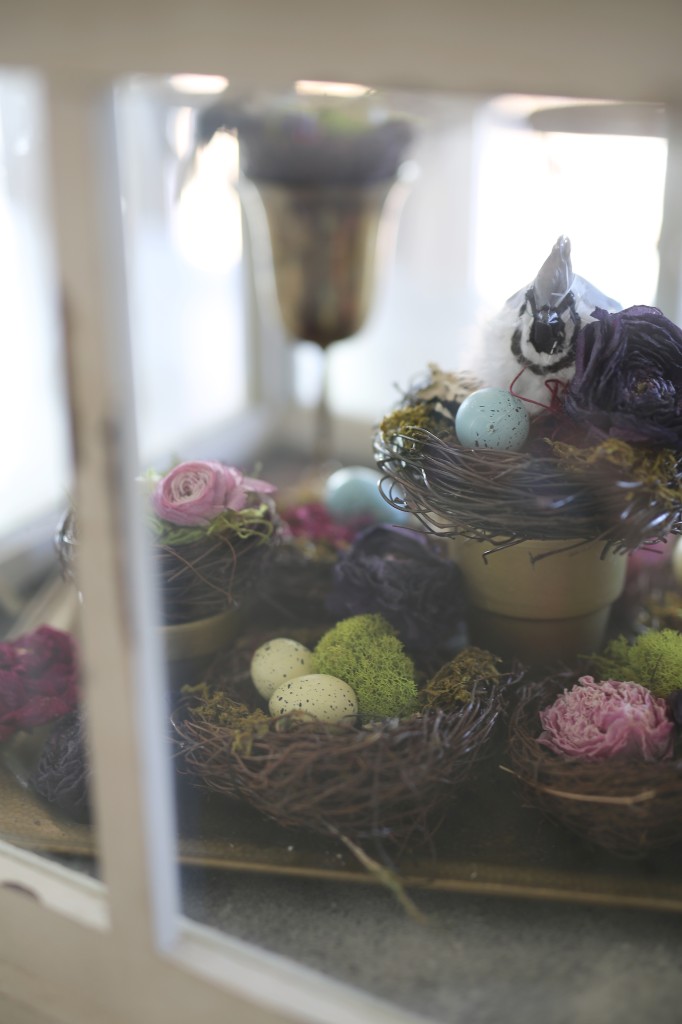 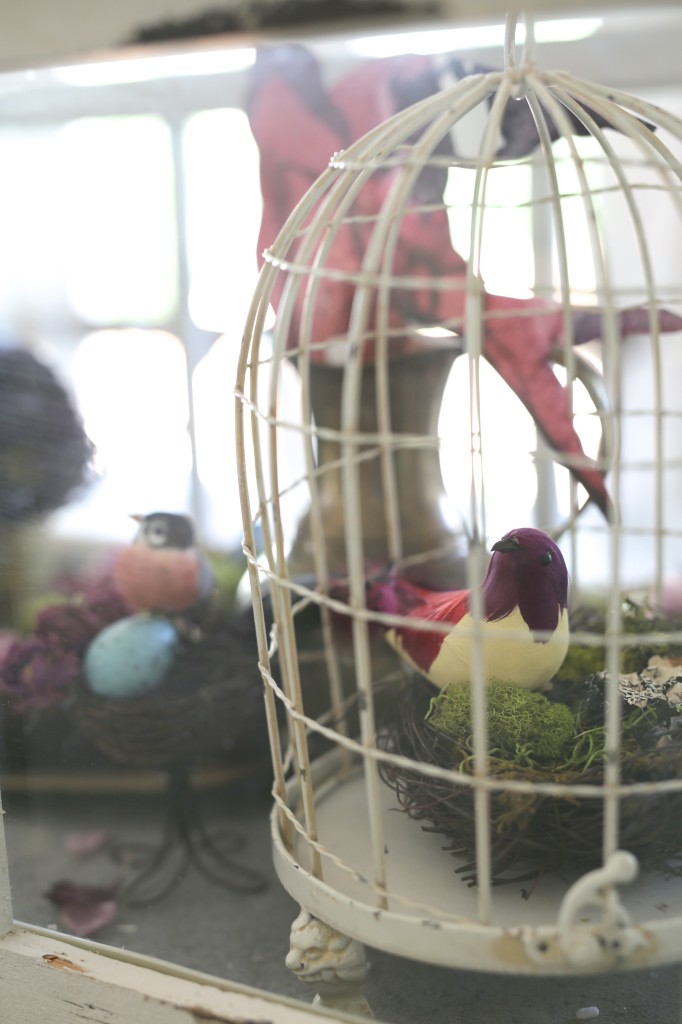 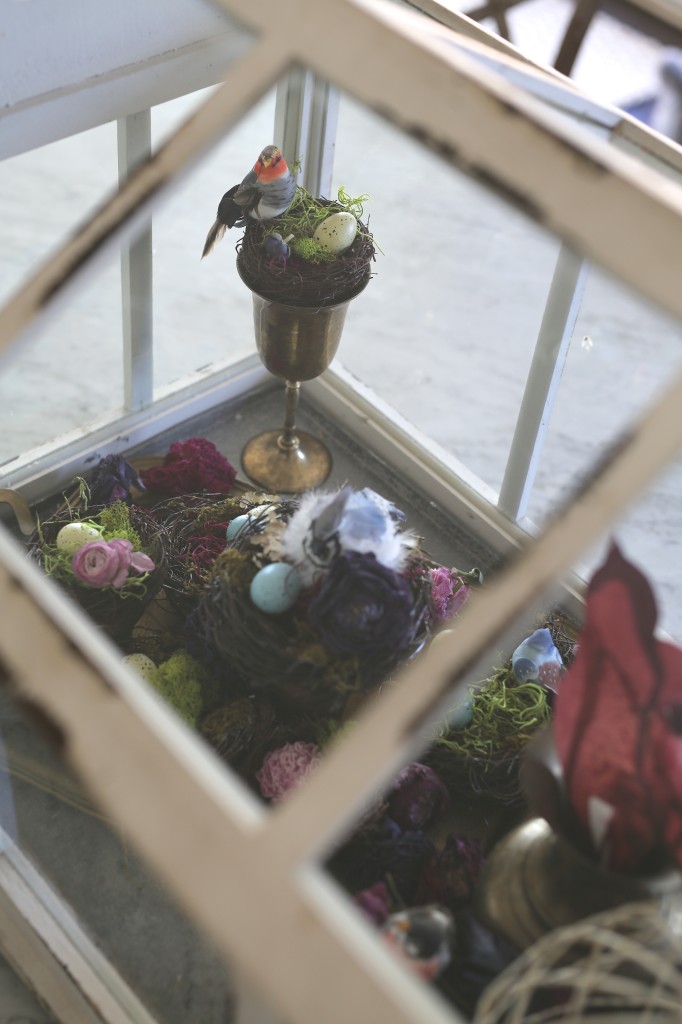 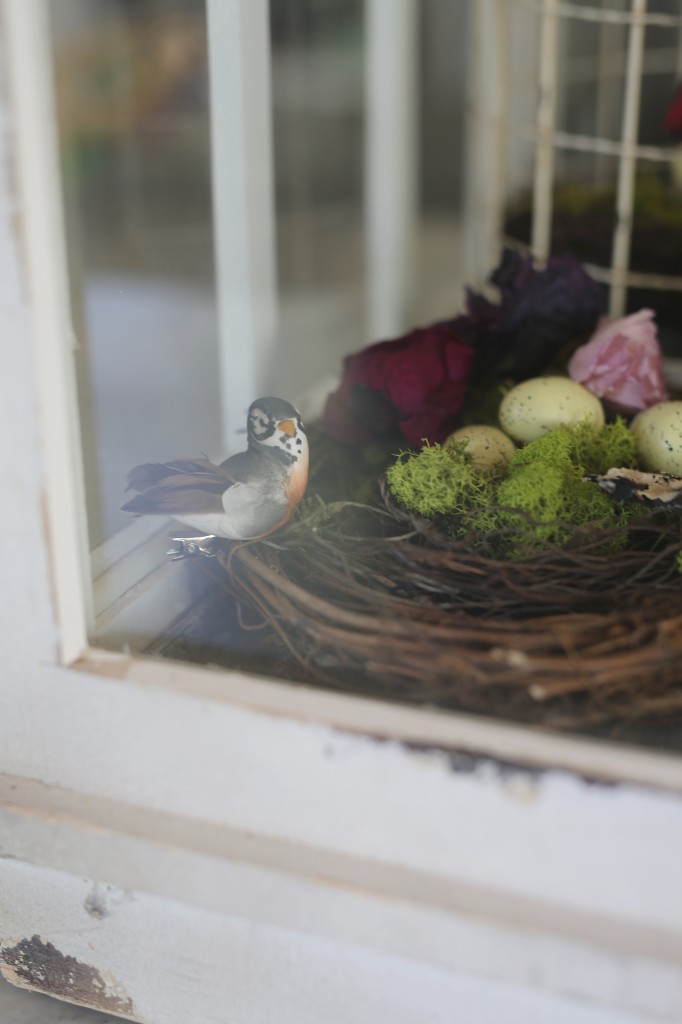 Oh, and here’s the original sketch for my horse painting. I stared at it for a week before painting and decided that a running horse was too chaotic for an already-chaotic area of our house. So I went with a stoic stance. Thoughts? 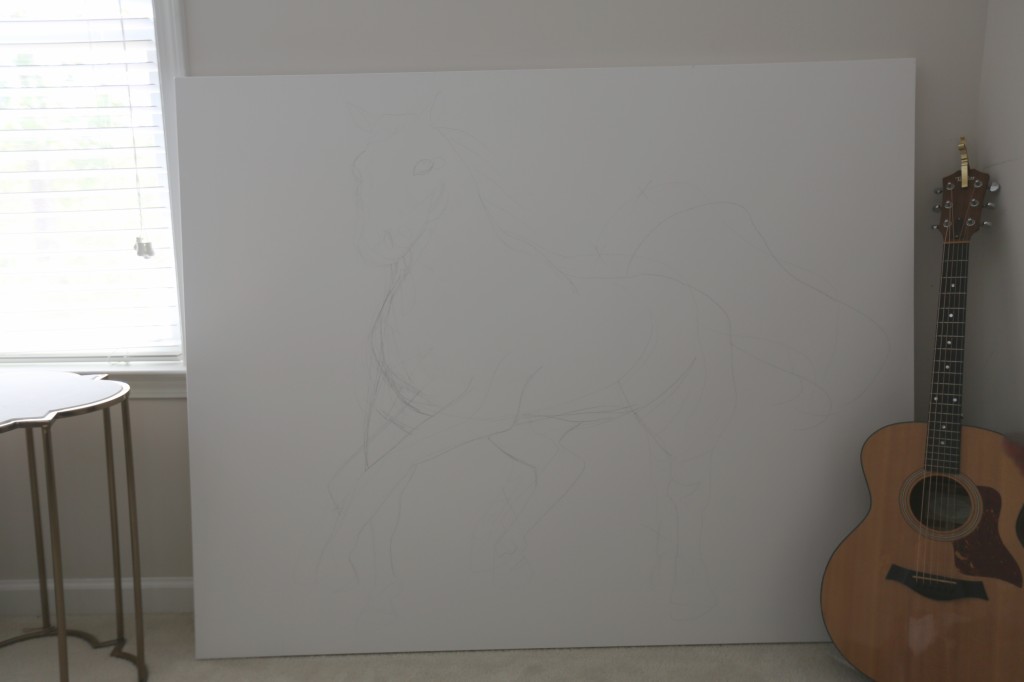