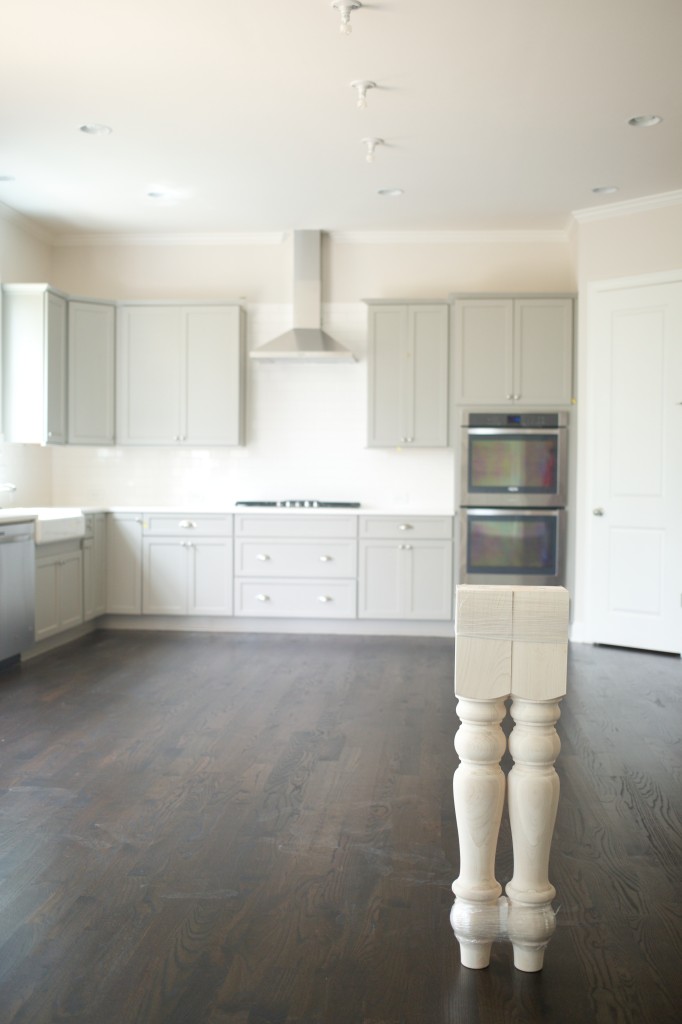 Well, God willing, in less than a week, Ryan and I will be homeowners! (AHHH!) I say “God willing” because there’s something deep within me still that thinks that something will go wrong — with the lender (Wait, you’re SELF-EMPLOYED? Nevermind.)…or the builder…or SOMETHING OR SOMEONE SOMEWHERE that will keep us from buying this house. I suppose the reality is that we’ve been dreaming for nine years and building for the past year, and the fact that it’s finally time to this to actually happen is unfathomable to me. However, barring any unforeseen circumstances, this time next week I should be sharing good news!

The past year of building has not been without its ups and downs, and, truthfully, here at the end, we’re in the nitpicking stage, which feels like a lot of “downs.” We’ve done one walk-through with tape, picking apart every little ding and chip and mistake we could find, and although I kinda’ envisioned it being fun to do, really all it accomplished is making me frustrated. I’ve had to remind myself that humans built this house, and no matter how much I wish that everything was flawless, ALL humans are imperfect, and thus so are the things we create. I’ve had to remind myself to have realistic expectations, to remember how lucky we are to have this dream house of ours, and that really a dent in the drywall is a first world problem. 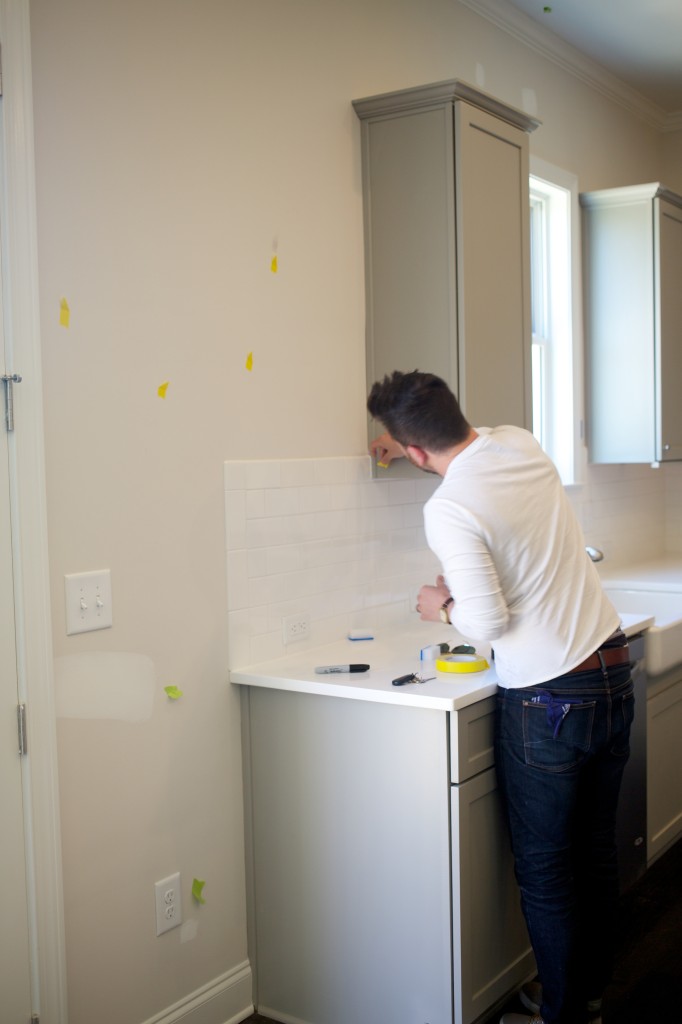 Speaking of first world problems, I may have mentioned that we opted out of having the builder install a kitchen island for us. The specs of what we wanted were out of their normal project scope (i.e. “We can do that, but it’ll cost you…”), so we hired Ryan’s friend from high school to build one for us after market. Thankfully he’s been great in advising and guiding us through the process to make our ideas a reality, and, if everything runs smoothly, he’ll be installing it the week we move in. We’ve had to make a million little decisions about the piece so far, including what legs we wanted. Ryan and I went online to the leg supplier (yes, that’s a “thing”) and picked out some we liked. Last week I met Ryan’s friend at the house to talk through some last details regarding the install, and when we got to the legs, I told him our selection…and then my stomach lurched a little. I had a gut feeling that something wasn’t right with them, so we talked about them at length and decided our choice was fine. However, if building has taught me anything, it’s to listen to your gut, because they came in this week…and they’re MASSIVE. 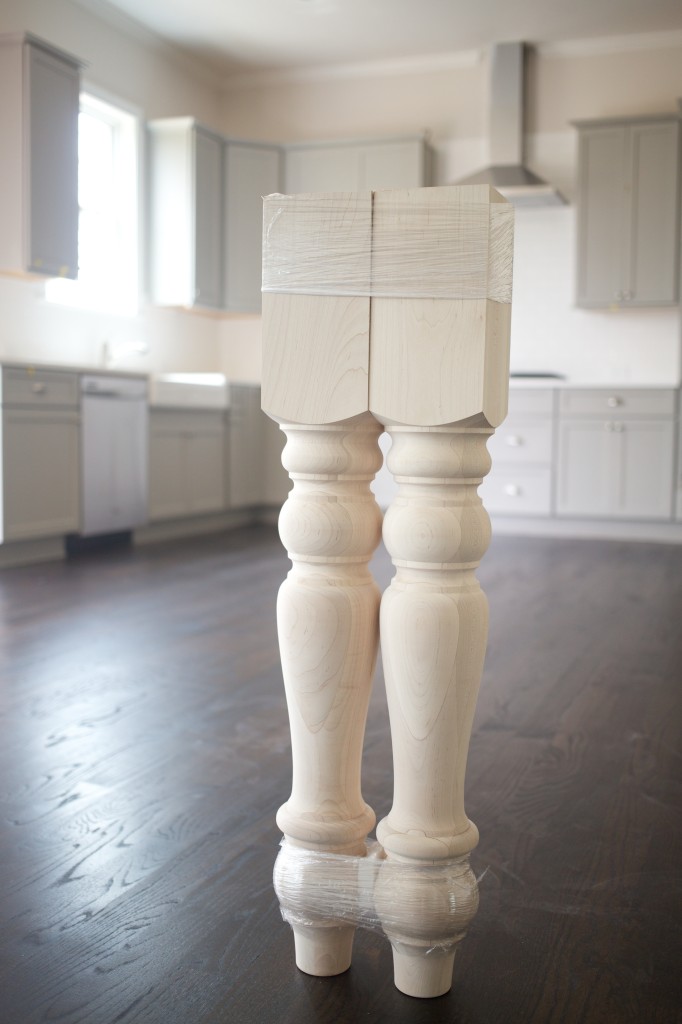 You would think that years and years of doing printwork would give me a keen ability to envision proportions on a computer screen as they translate to real life, but no. When the guy texted me a picture of the legs, I about died. Thankfully he was willing to meet back at the house today to see them in person, and instantly I knew we had chosen wrong. They just looked so…well, fat. Everything in our kitchen is supposed to be farmhouse-y, so it’s very plain and clean. I had wanted some simple turned legs for the island. The legs that we chose, however, are heavy-looking, and the particular style is too busy for the feel we want to achieve. The guy had never had a client request new legs, but thankfully the supplier was willing to switch them out for us with little hassle. Whew. The new legs will be skinnier and plainer…and hopefully much better than our first selection! ;) 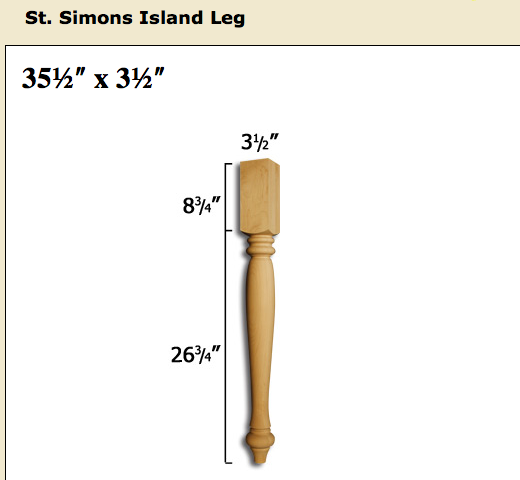 The next week is going to be scary as we prepare to sign over our bank account for the next 30 years to our lender, and then the following days are going to be complete chaos. Our landlord agreed to let us stay two extra weeks so that we can have time to clean out our stuff and move slowly (since we’re moving less than a mile down the road). There’s a lot of JUNK that we’ve built up over the past few years, and neither Ryan nor I have the desire to bring it with us. We both want this house to feel like a fresh start for us, which means that spring cleaning is a must. Wish us luck, and let’s all cross fingers that nothing catastrophic happens, keeping us in Amityville forever! ;) 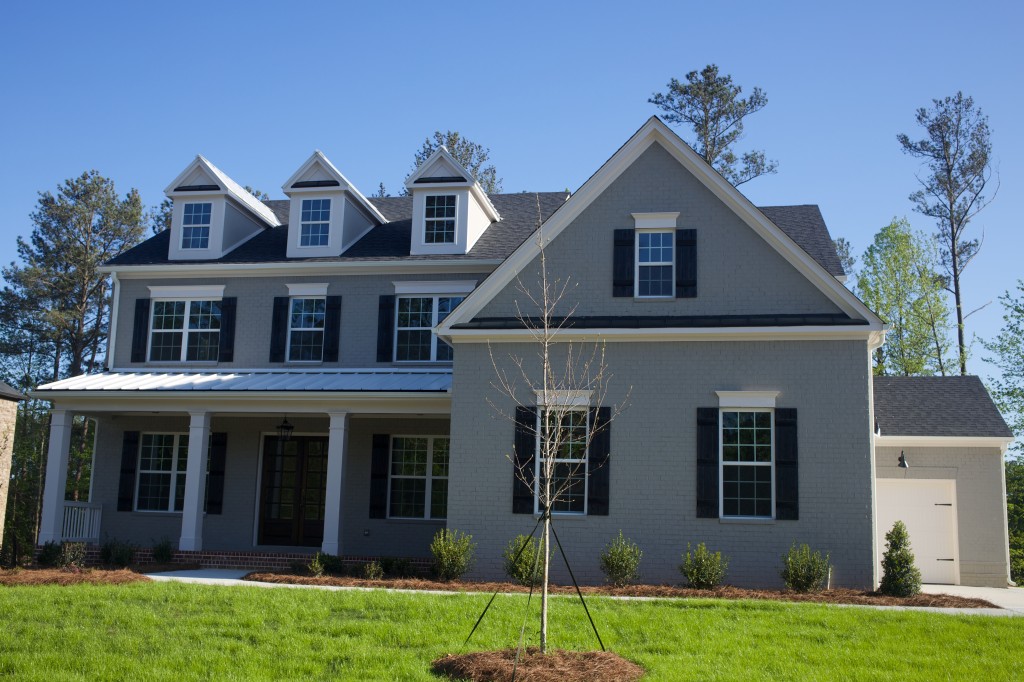