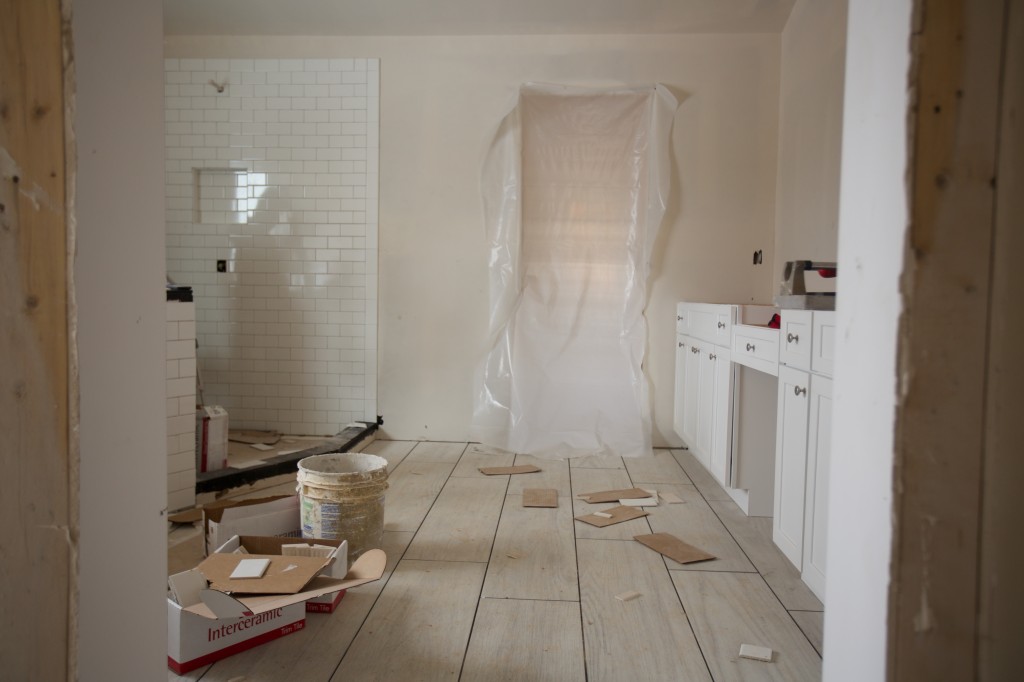 I haven’t written a house update in a while because, well, the updates would be really boring things like:

(I added those exclamation points to make those things seem way more exciting than they are. Did it work???)

However, it’s time to catch up on all things #buildingcasadeshove.

(If you’re only interested in The Big Tile Debacle, then feel free to scroll down. ;) )

The framing did get done, and we do have walls! We were fortunate to watch this same process in another same-floorplan house before our home got started because, MAN, is it hard to envision while it’s going on! Thankfully Ryan and I are happy with all of the structural decisions we made, including things like removing pretty much all walls possible in order to get the most open feel possible. 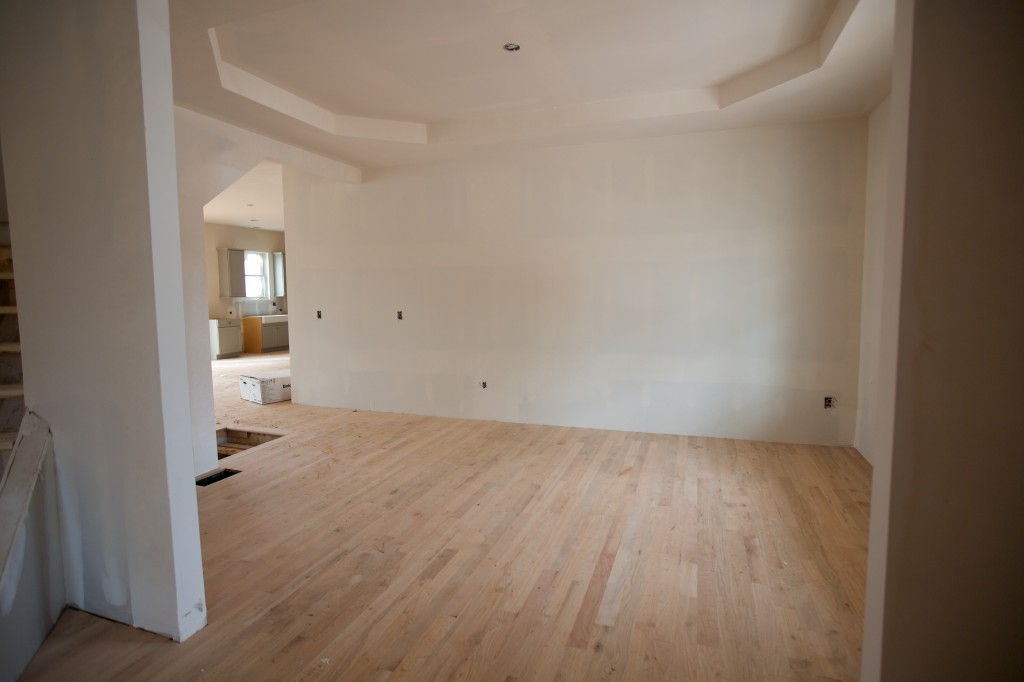 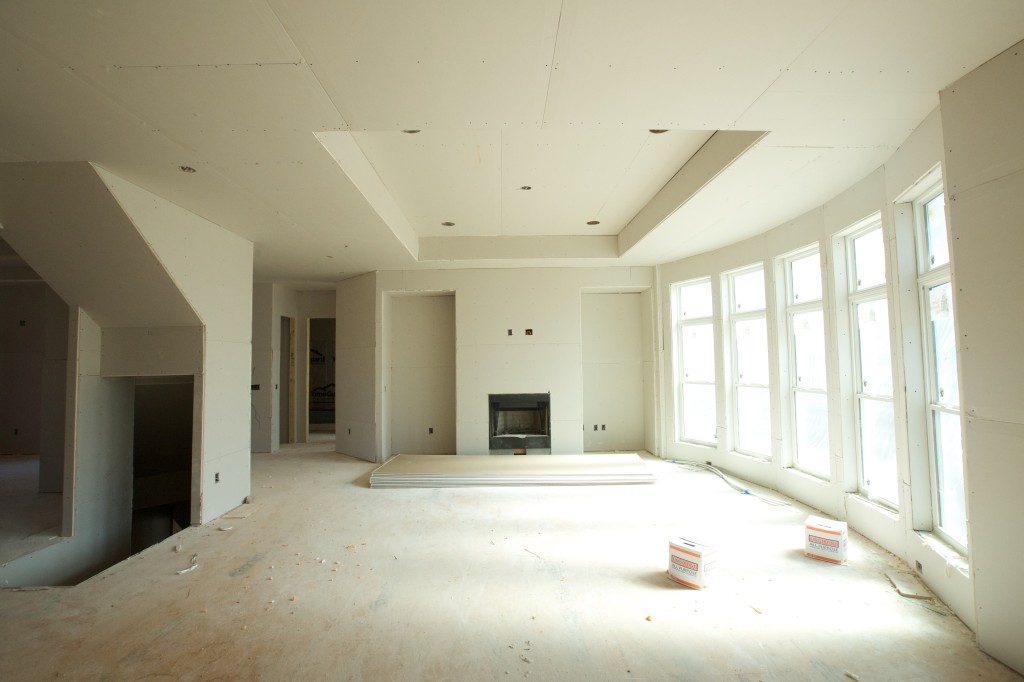 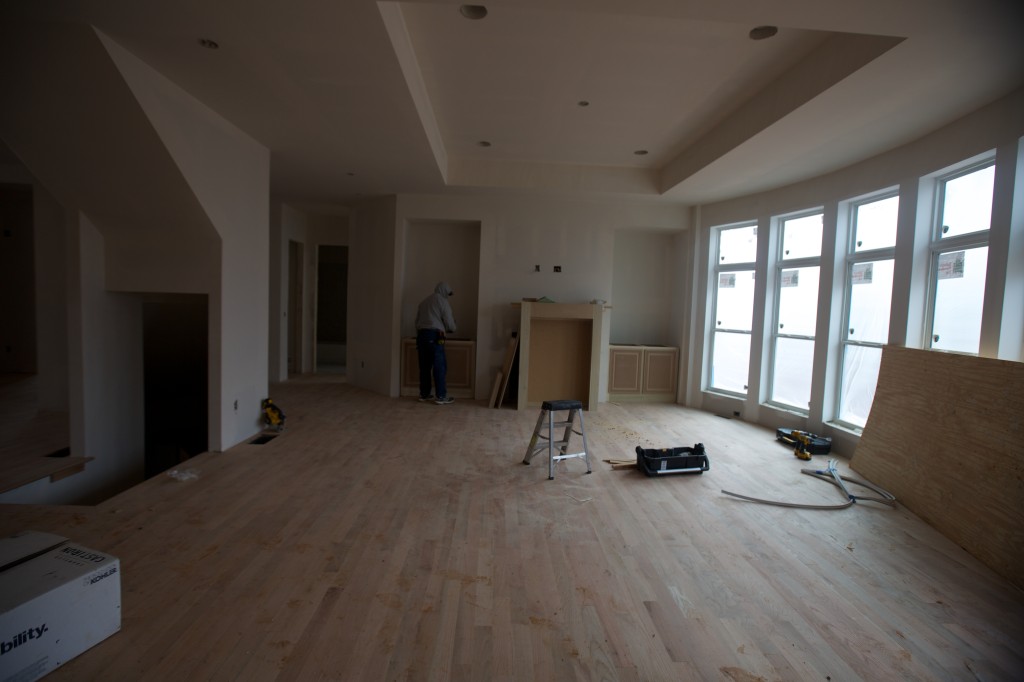 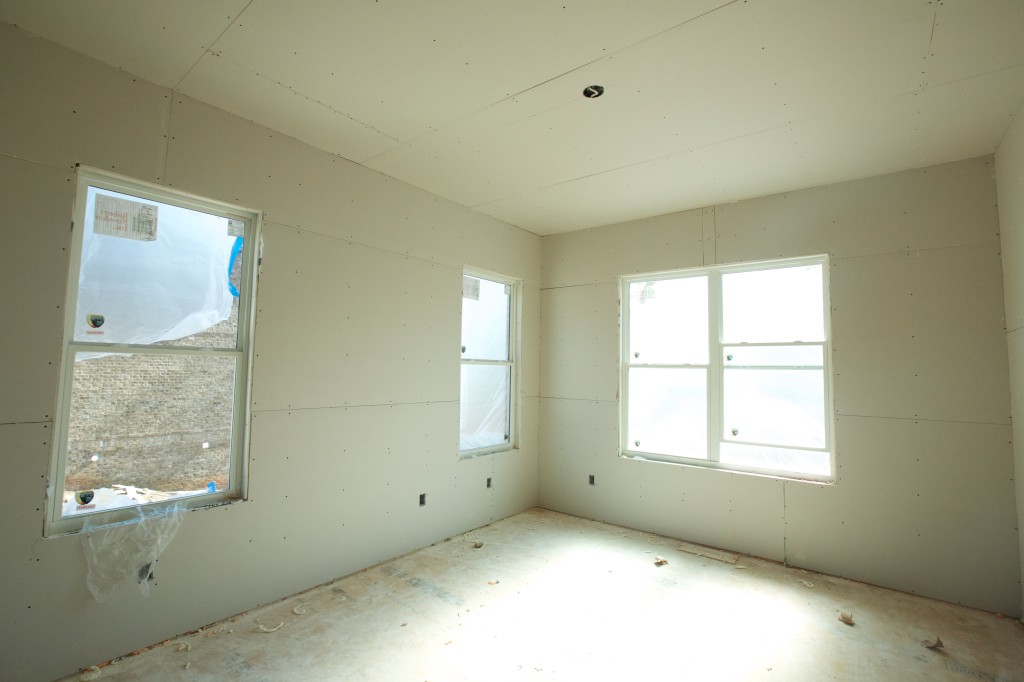 Playroom! (I CANNOT wait to not have toys in my living area…) 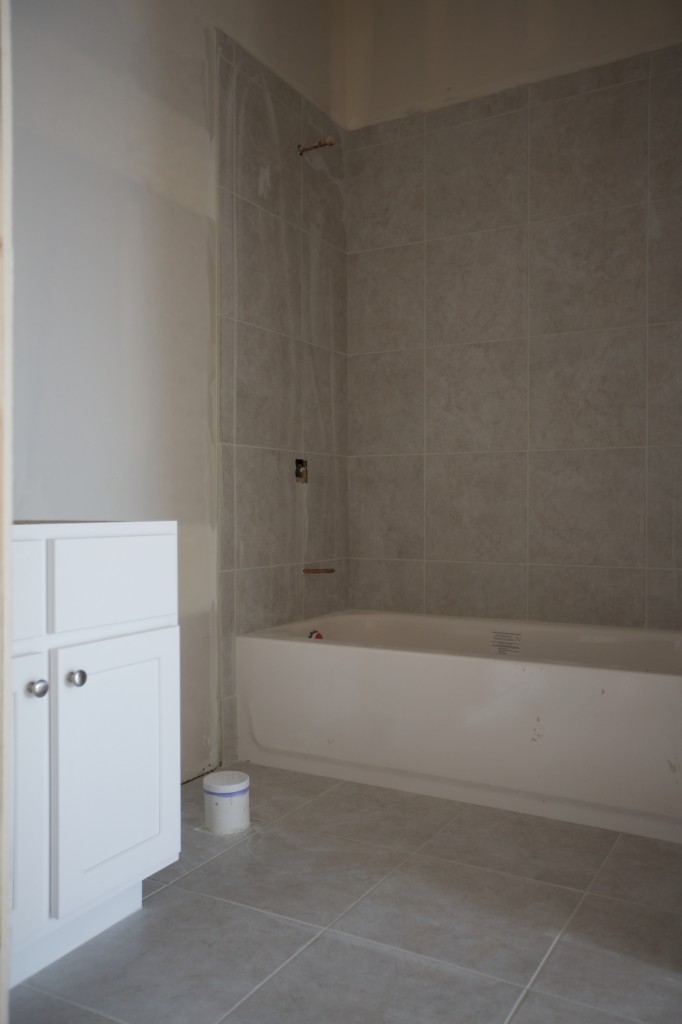 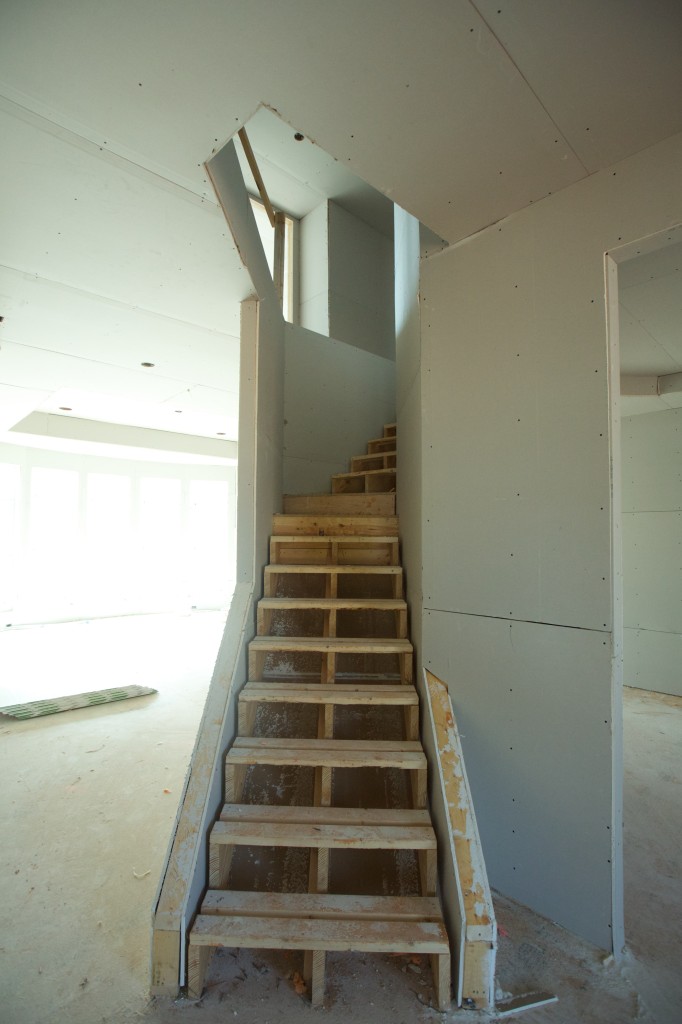 From the front door, the main stairs 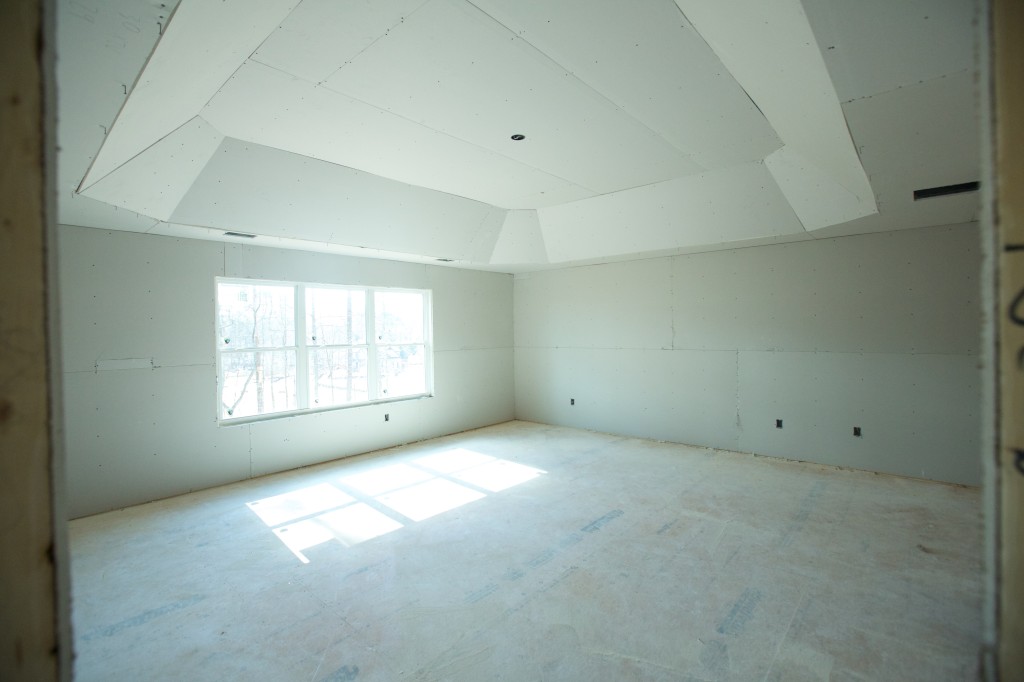 Master bedroom (which is a great size, but let’s be honest, this fisheye-look makes it look waaaay bigger than it is #honesty) 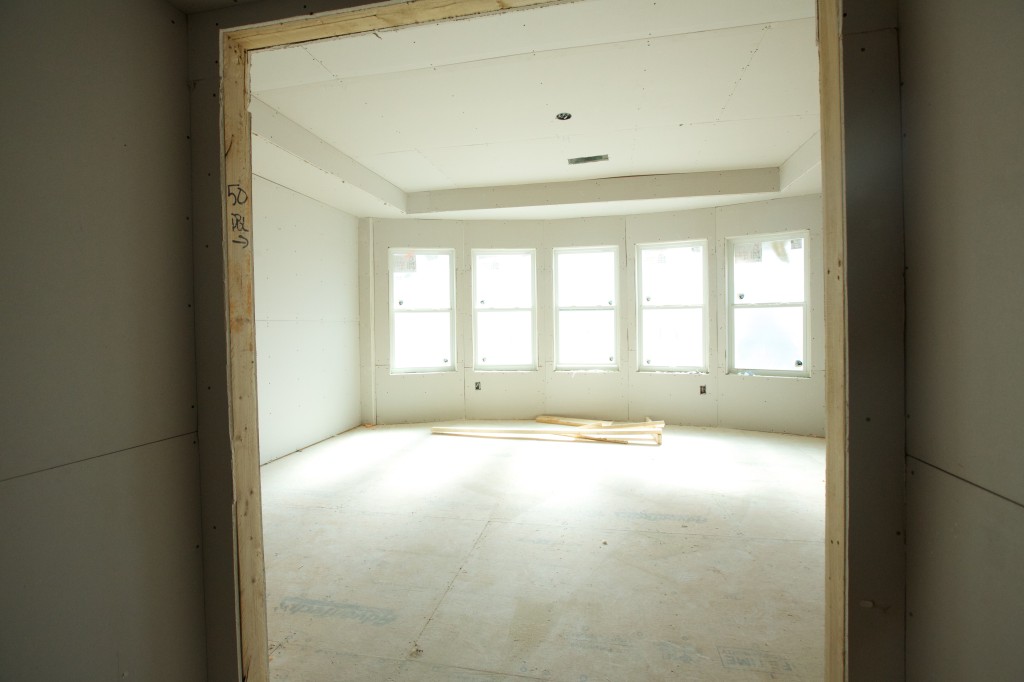 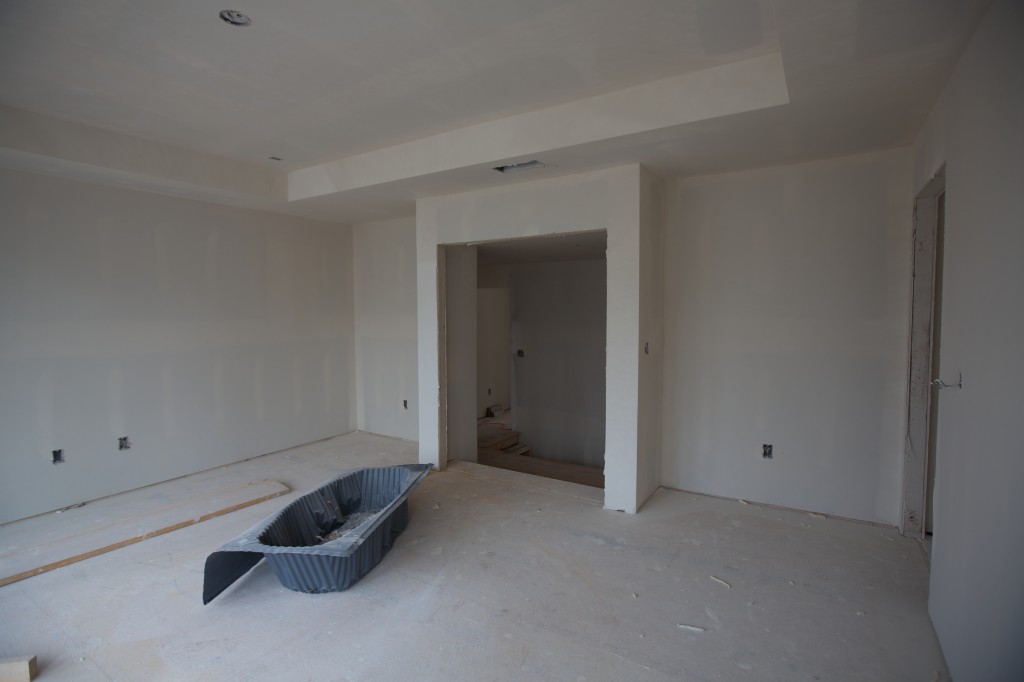 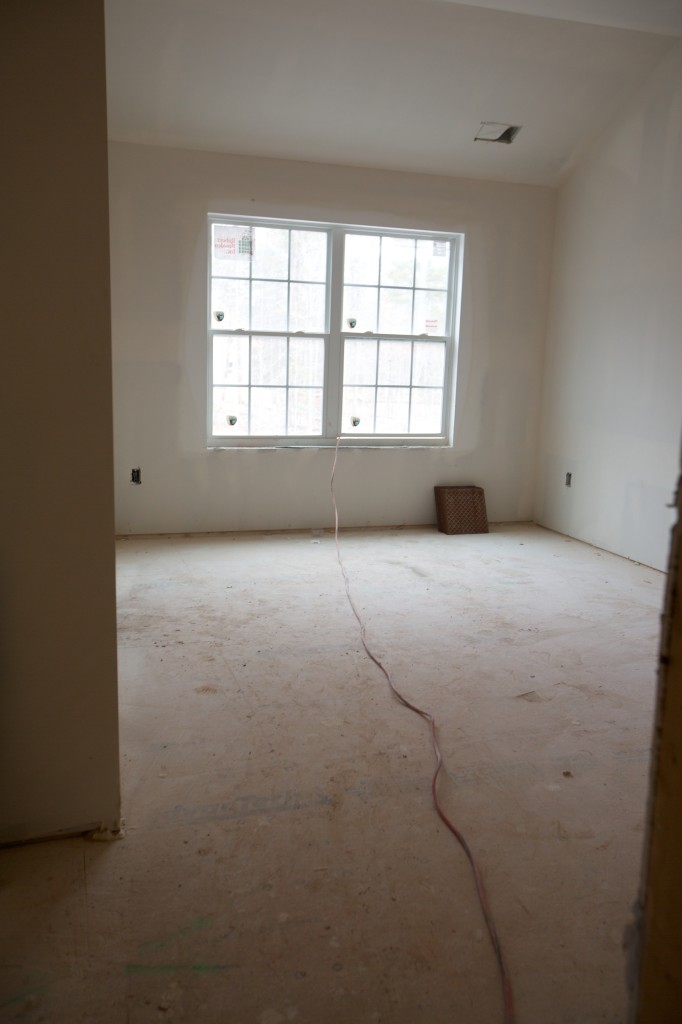 Cricket’s room (closest to our room, of course) 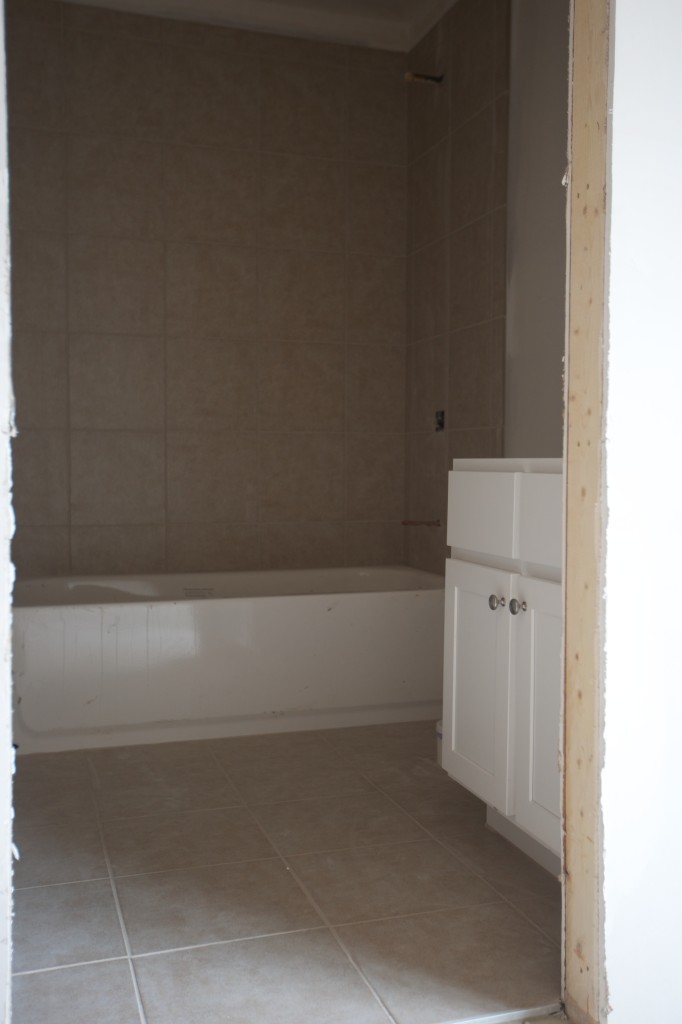 The exterior is almost done! It was a little nerve-wracking there for a while because the brick went unpainted for weeks and weeks and weeeeeeeeks. I’m sure our neighbors were confused about our design choices because we went with cheap gray grout for the house (to save money since it would be painted anyway) and white grout for the porch, which was to stay natural. The decision whether or not to paint the porch was a hot topic around our household for a while, with me staunchly in the unpainted camp and Ryan leaning toward painted. I have to share my triumphant victory because the unpainted porch is perfect, at least in our eyes. Oh, and we had been so anxious to see the gray we picked (Sherwin-Williams Pavestone) on the actual house, and it turned out exactly the tone we wanted. Yay!

There’s still some work to be done on the exterior (moldings over the windows, painting the trim and columns cream, adding real front doors, etc.), but you can get a good idea of how it’s going to look from the latest pictures. Ryan did notice the other day that our porch roof is wrong. Yikes! It’s supposed to be tin but right now it’s shingles, so they’re going to go back and fix it. It’s not a big deal, but it did make us want to look at every inch of the house with a magnifying glass. 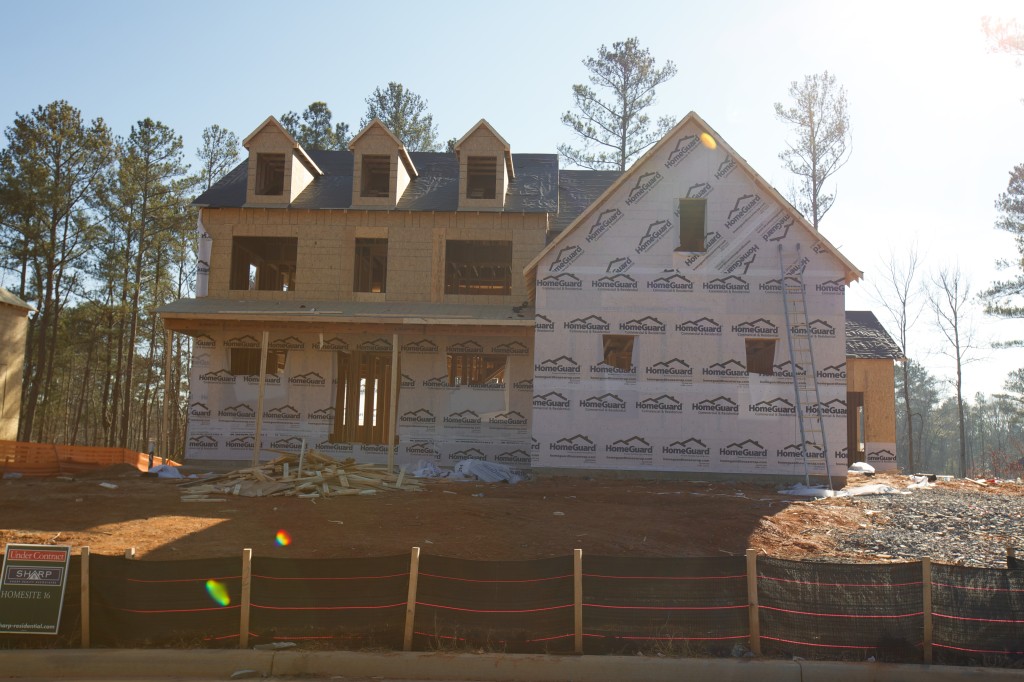 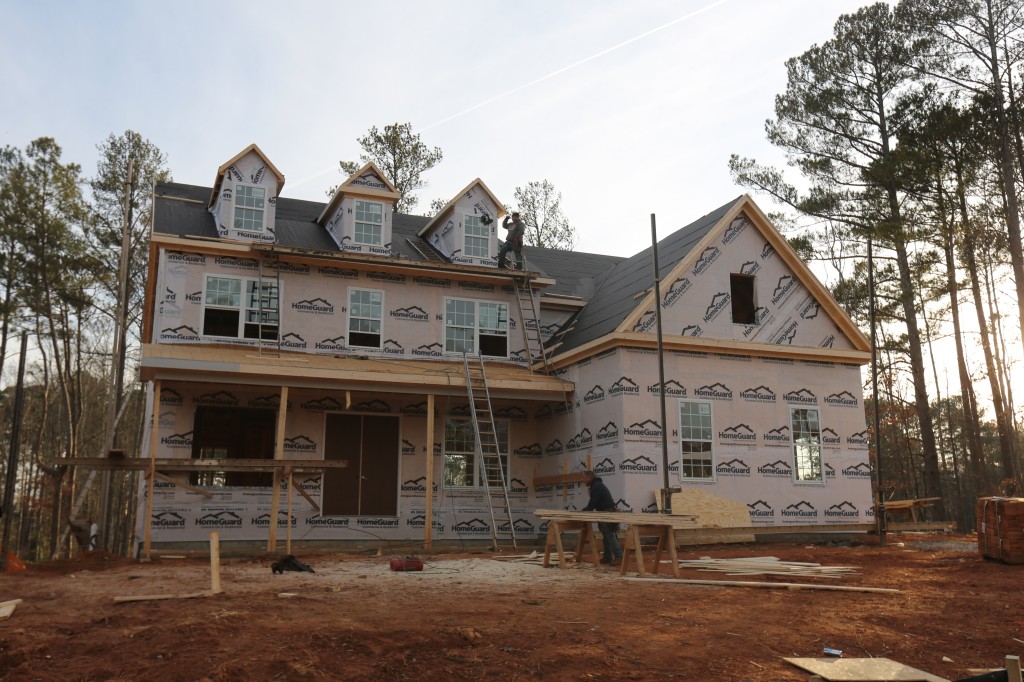 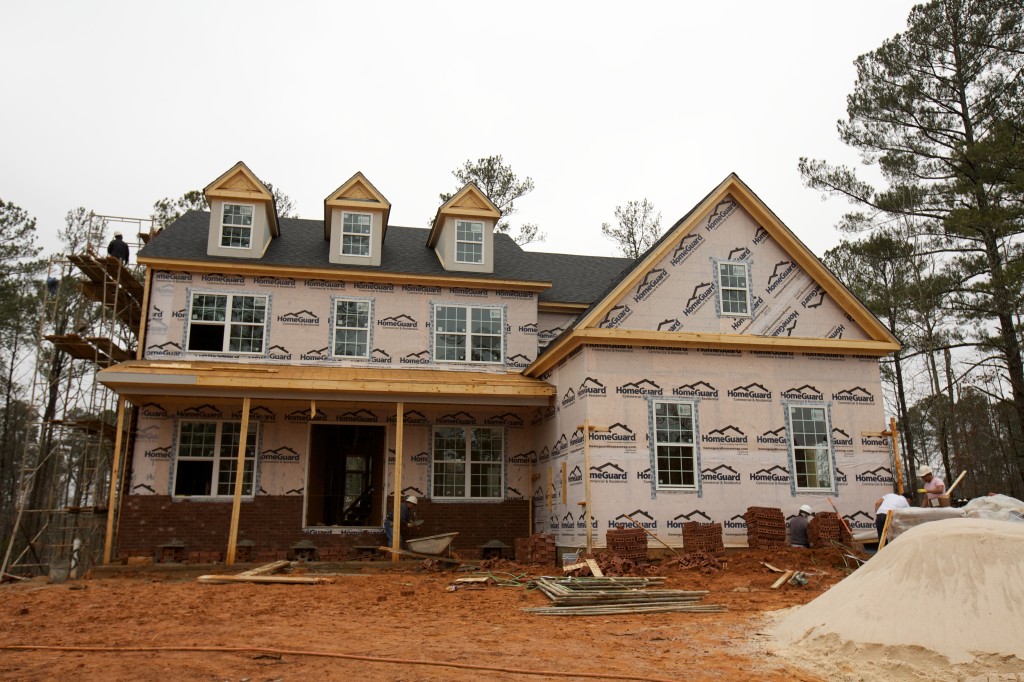 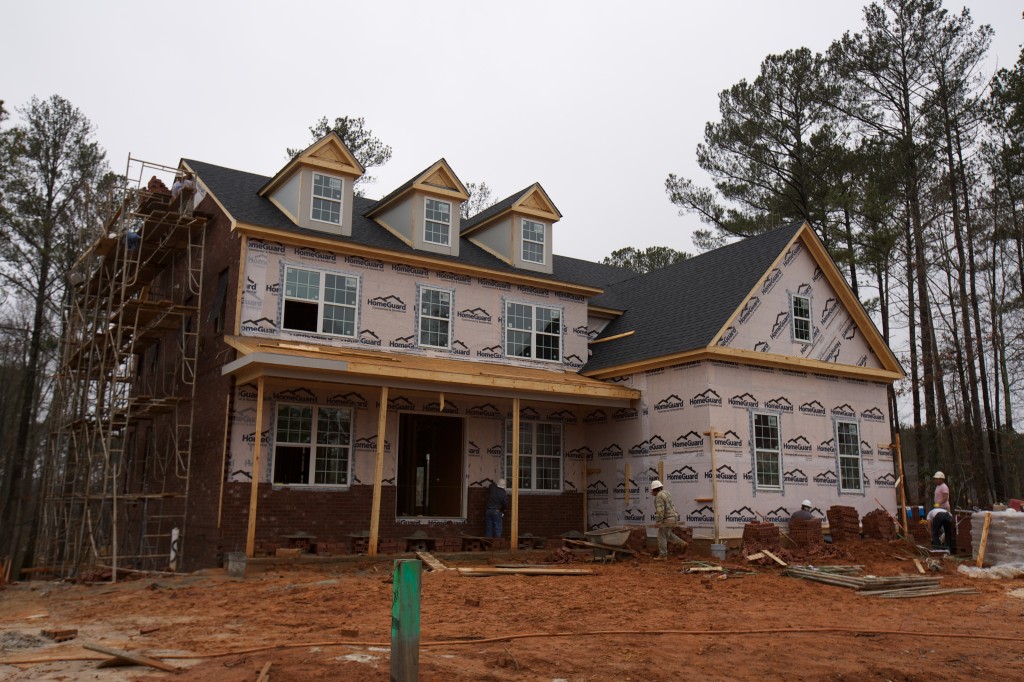 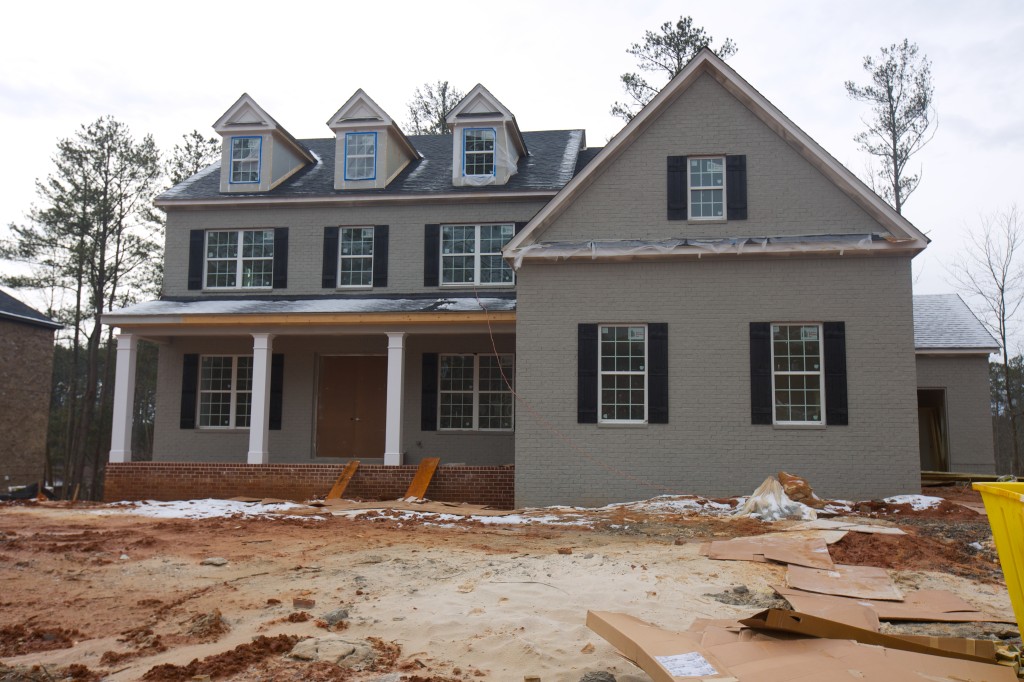 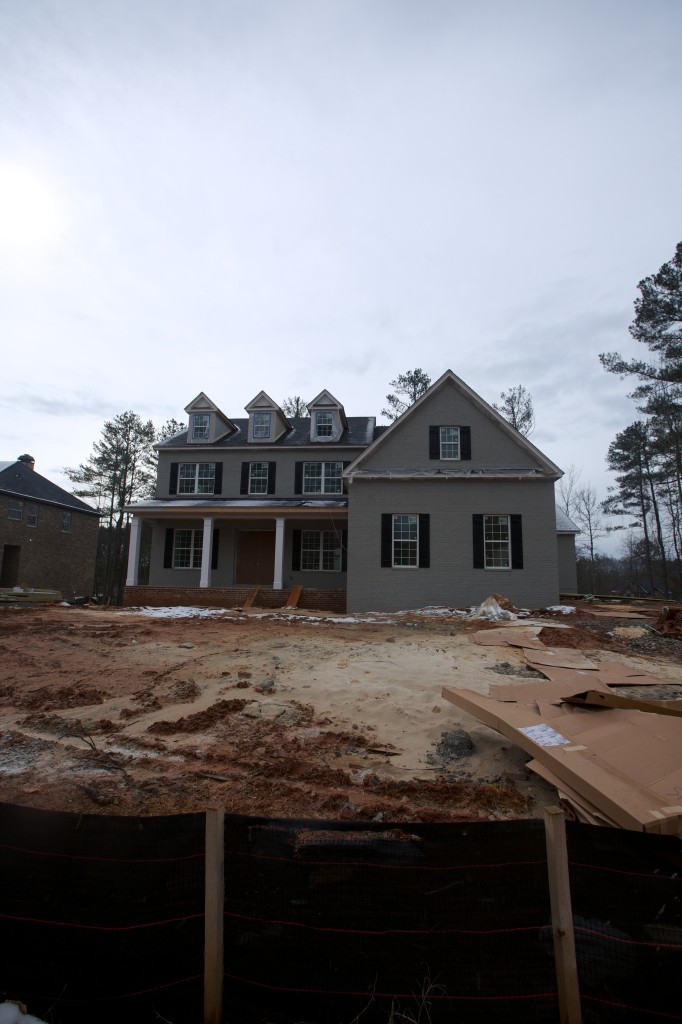 In addition to being nervous about the exterior paint color, we’ve also been worried about the kitchen cabinet color. (From this experience forward, if anyone ever mentions “gray paint” to me, I’m pretty sure my left eye will begin twitching.) We went with SW Dorian Gray, and it’s great. I was afraid that it would read too beige, but it definitely changes with the light; sometimes I swear it leans blue, while other times it’s very beige, and sometimes it just looks plain ol’ gray. Whatever it is, we’re happy with it and super excited to see the kitchen coming together! 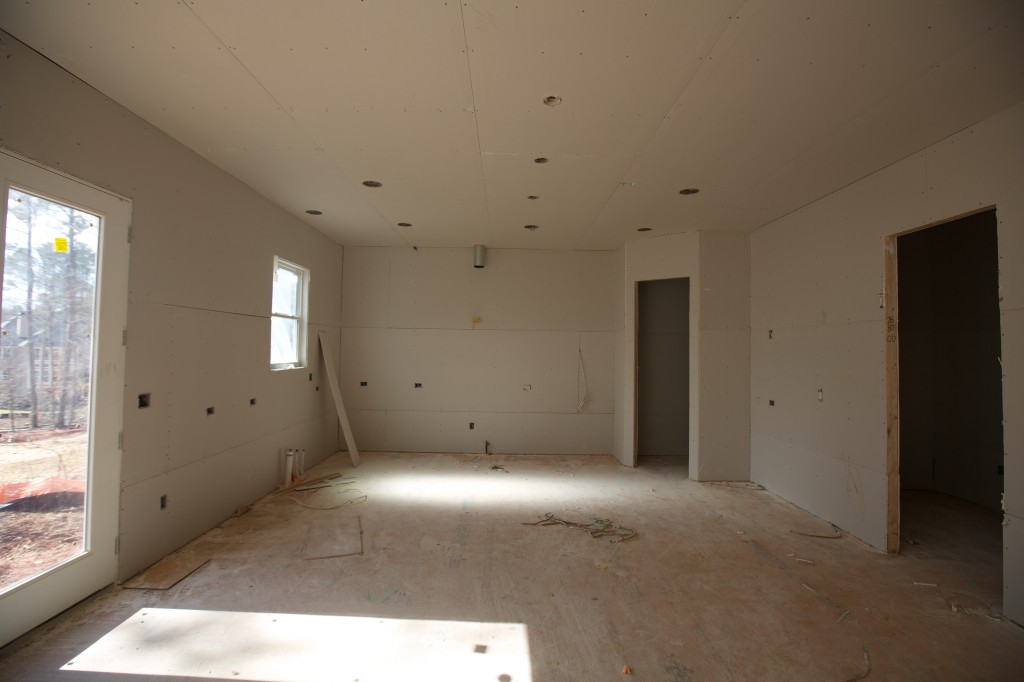 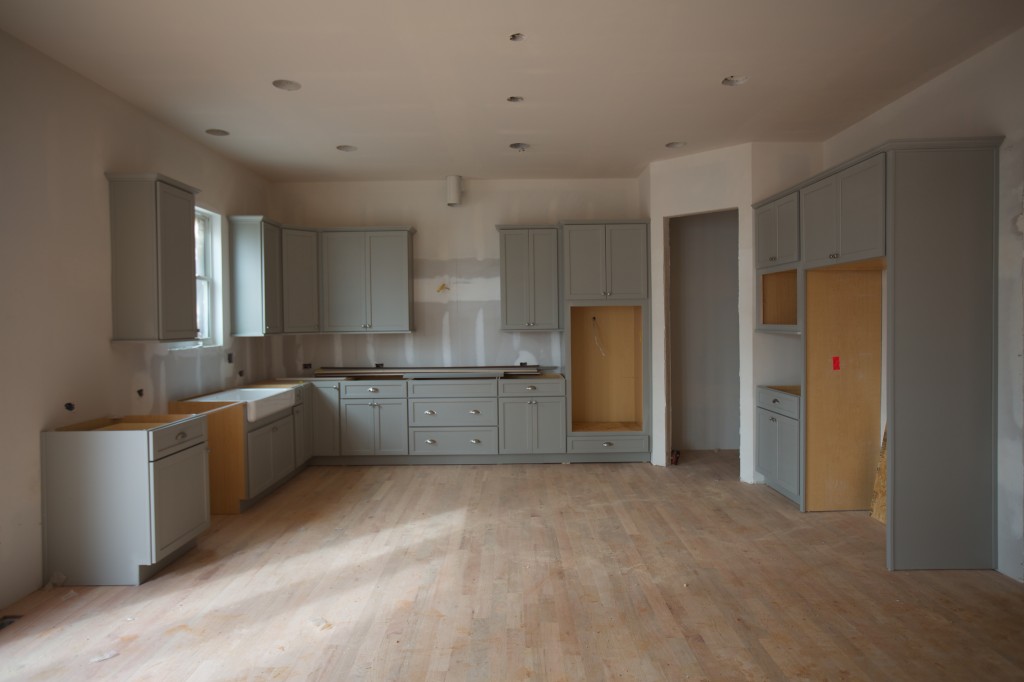 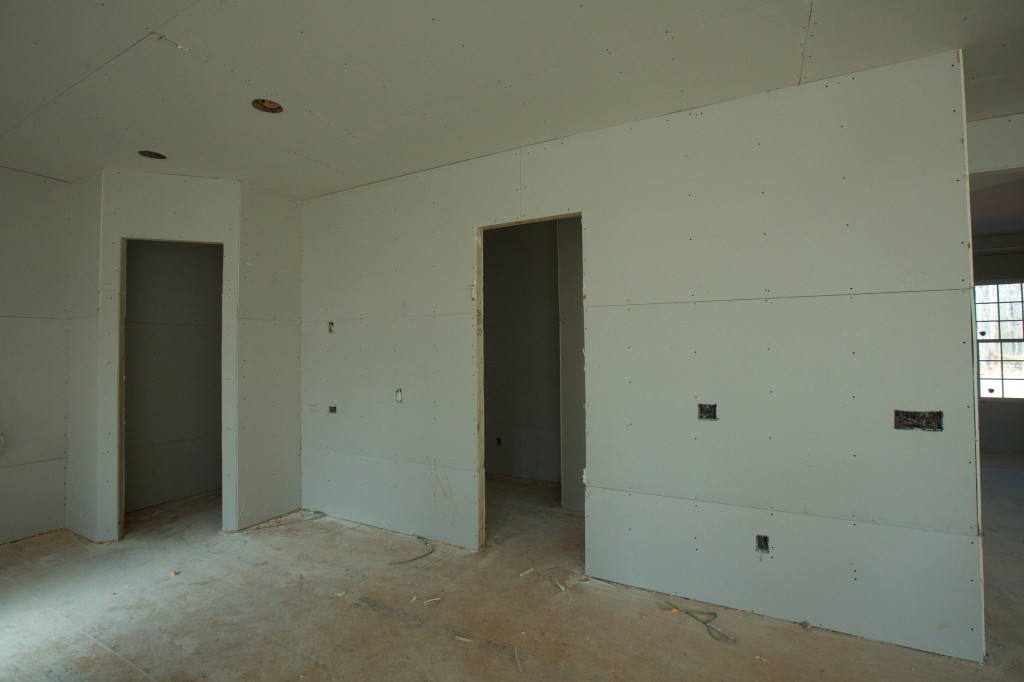 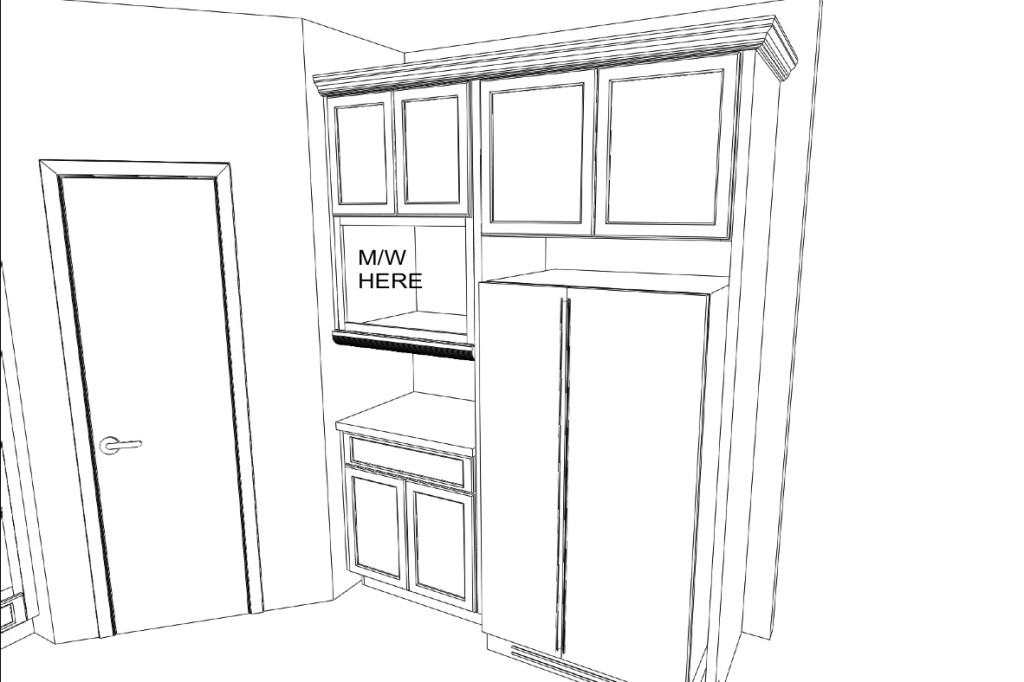 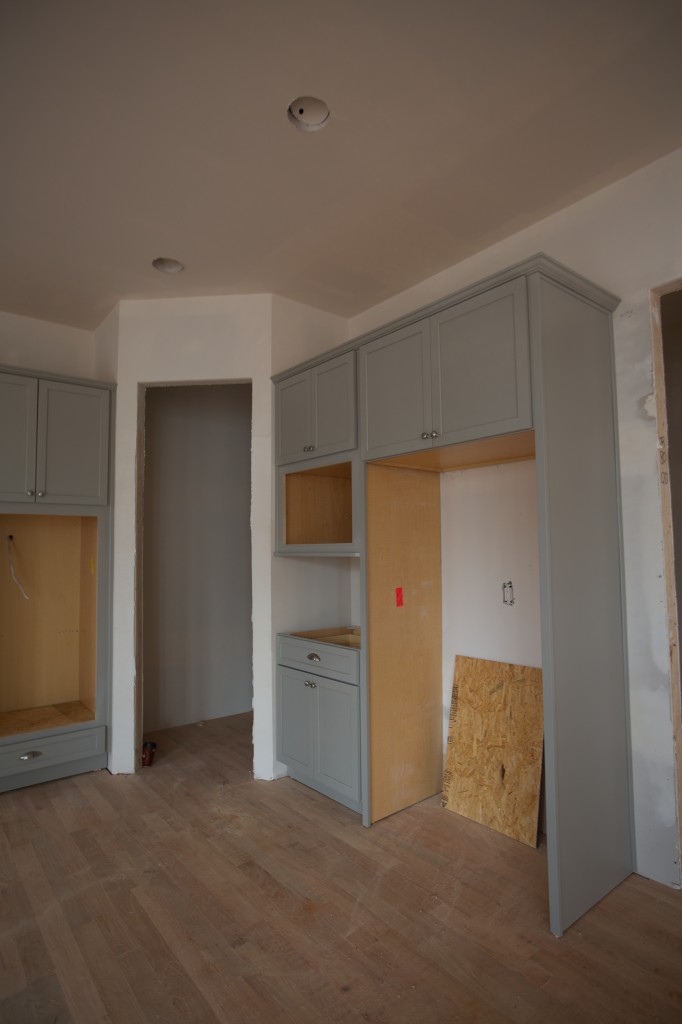 Okay, onto The Big Tile Debacle.

You may remember that I was SUPER excited about the tile we picked for our master bathroom floor. So excited I even took a picture with it, which seemed obnoxious at the time but, in hindsight, was actually quite genius. It’s this tile that looks like long, skinny planks of white-washed wood. It was an upgrade, but I loved it.

Fast-forward four months to this past week when Ryan and I dropped by on tile installation day. The rest of the tile in the house is standard, so we were eager to see the master bathroom. However, as soon as we peeked in, we knew something was wrong. They were installing these really wide planks, not the skinny tile we picked! We took a quick picture, ran home and emailed and texted the builder and designer to alert them to the problem. We were trying to be nice, trying to save them money because they were obviously going to have to undo it. I got an immediate response from the designer that 11″ tile was written on our selection form, followed by a response from the on-site builder that the tile he ordered was, in fact, the correct 11″ tile from the form. The designer then confirmed (via my pictures) with the tile rep that the sample I’m standing with in my picture is a 7″ tile, not an 11″.

At this point (I hope) you’re thinking, “Okay, so they wrote down the wrong tile. No big. Just reorder it and fix it.” At least that’s what I was thinking. BUT, of course, the builder didn’t see it that way.

Unfortunately right now we’re in a lengthy argument with the builder about replacing the half-done master bath tile. It’s an infuriating situation, and I wish I was able to write this anecdote with a positive, definitive end, but we’re not there yet. We will be (because they don’t know who they’re trying to mess with!), but just not quite yet.

Here are the two sides of the arguments so you can decide for yourself, haha:

BUILDER: Your form says 11″ tile, which you signed off on. It looks fine. (Yes, the VP of Construction apparently saw it and said, “Well, it looks fine to me.” Seriously.) We’ll rip it up and replace it for you without marking up our costs. Geez, thanks.

TALIE: I pointed to a full-size piece of tile and said, “I want that exact one.” I HAVE PROOF (A PICTURE) OF THE EXACT SAMPLE I CHOSE. The designer thought it was 11″ wide, but it wasn’t. It is her job to know her product, not mine. (I mean, should I have the wood flooring they installed tested to make sure it’s the correct species we selected?? Really, now.) We did sign off on the 11″ tile, but that was under false information provided by their company employee. It might look “fine” to you, but it is NOT what we selected and does not achieve the look we are going for. It was an upgrade we’ve already paid for, and I refuse to REpay for YOUR mistake.

I’ve tried being very nice to the designer (who’s managing this situation), all the while trying not be a jerk and straight up blame her. We’ve really enjoyed our relationship with her up to this point. However, I know that she knows it was her (or her assistant’s) wrong. (There are a ton of boring details to justify my you-know-this-is-your-fault argument, but I won’t bore you with them.) We’re at a stalemate right now, and unfortunately it’s getting to the point that I’m going to have to unleash my mean side. Ugh. Why can’t people just be honest and logical? Why do we live in a society where the squeaky wheel gets the grease? (The mean squeaky wheel?) Why don’t we reward clients and customers who are considerate and understanding and rational instead of trying to take advantage of them? And, yes, at this point I must also note that I’m fully aware that this is the epitome of a first-world problem, which is why I haven’t totally gone crazy about it yet.

So, more to come on The Big Tile Debacle, but here are some pictures so you can see what I’m talking about. 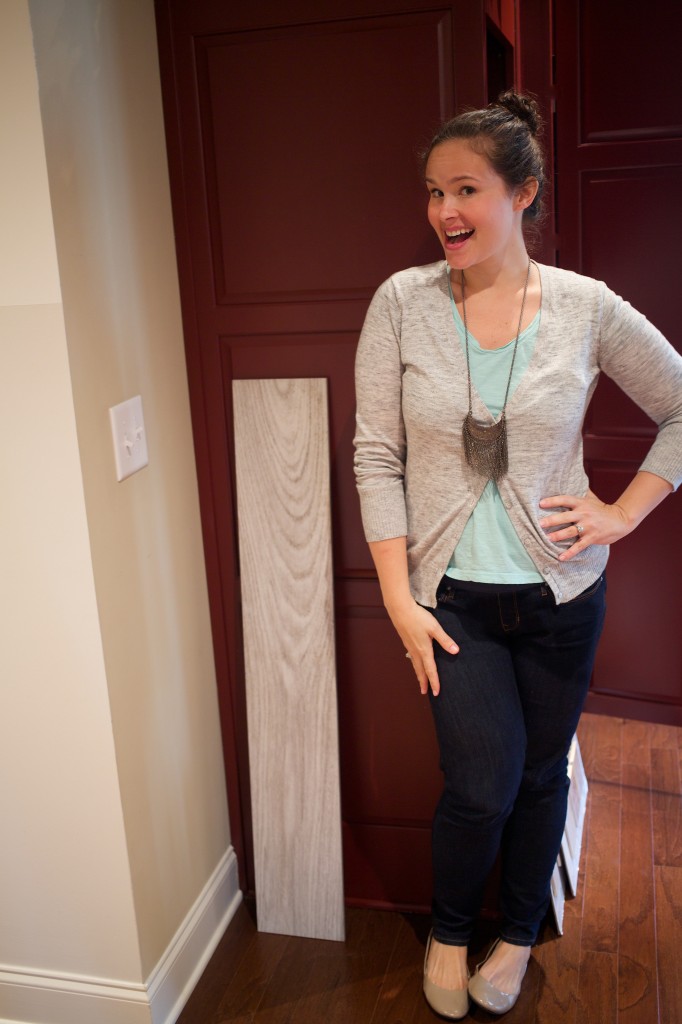 With the 7″ sample in the showroom 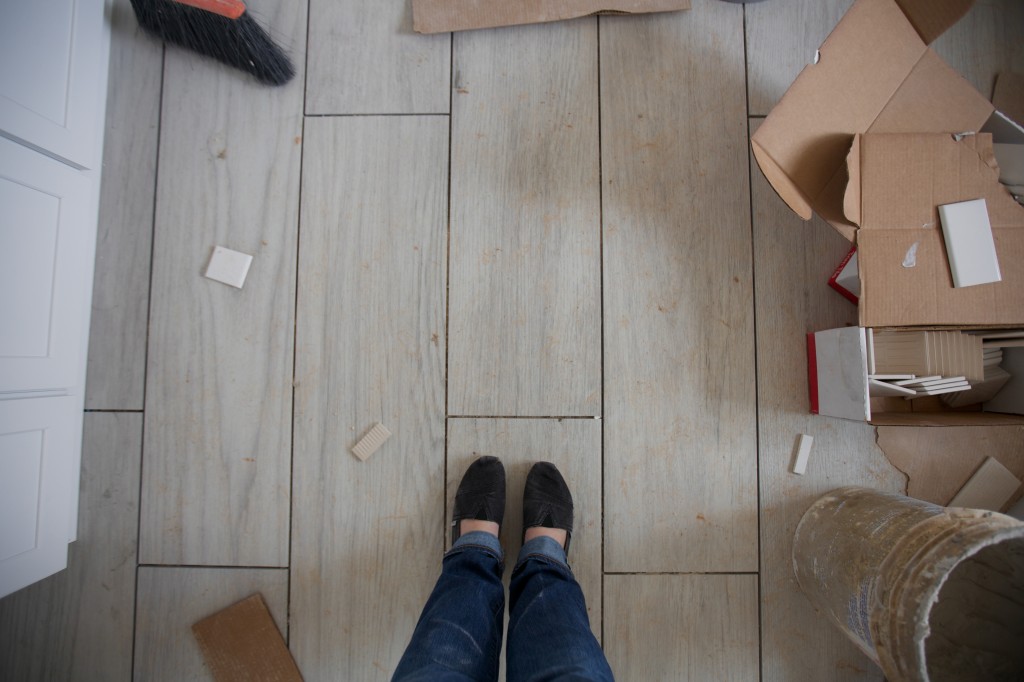 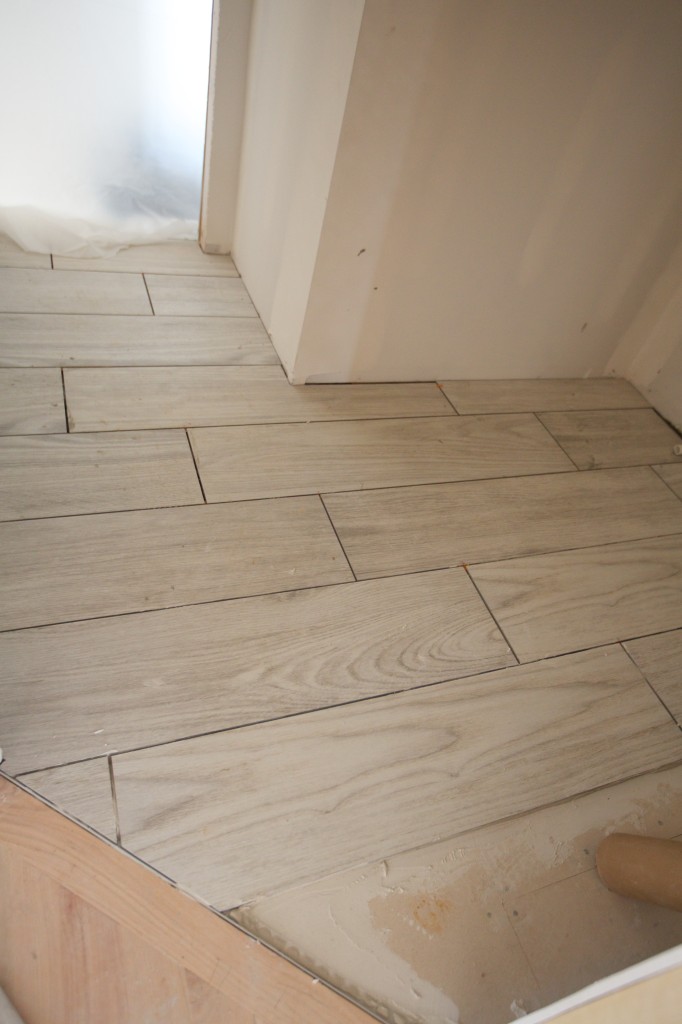 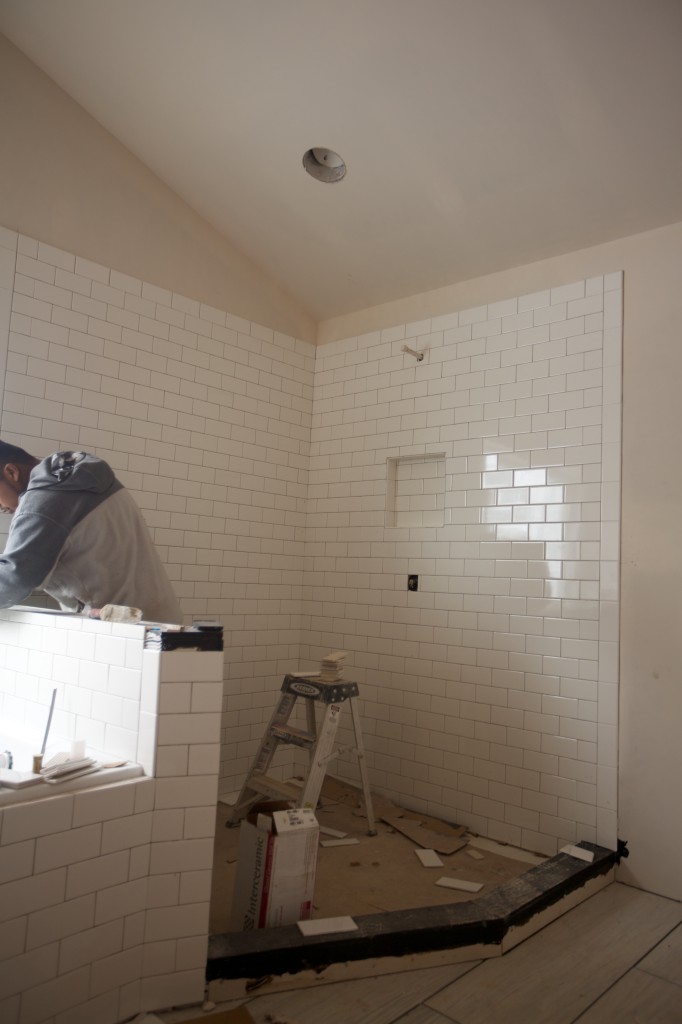 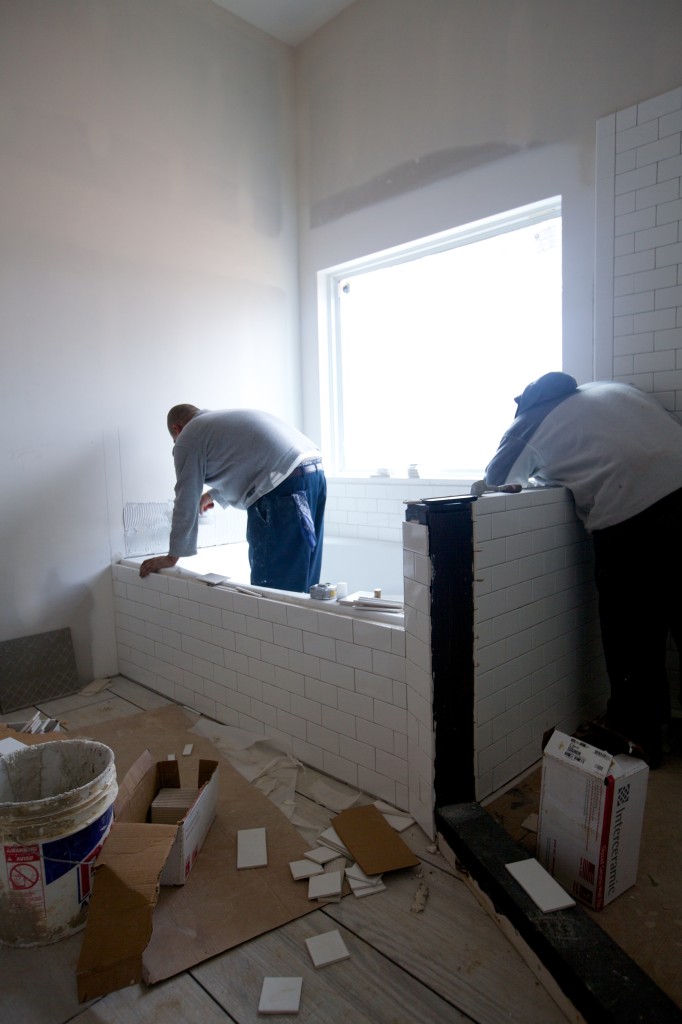 A while ago the builder told us that once cabinets were in they’d be able to give us an idea of our closing date, but as of right now the master bath tile being reinstalled is probably going to be a better gauge. Maybe two more months?? Things were moving as slow as molasses, but the past few weeks have seen a lot of change and progress. I can see a finish line in sight!!!