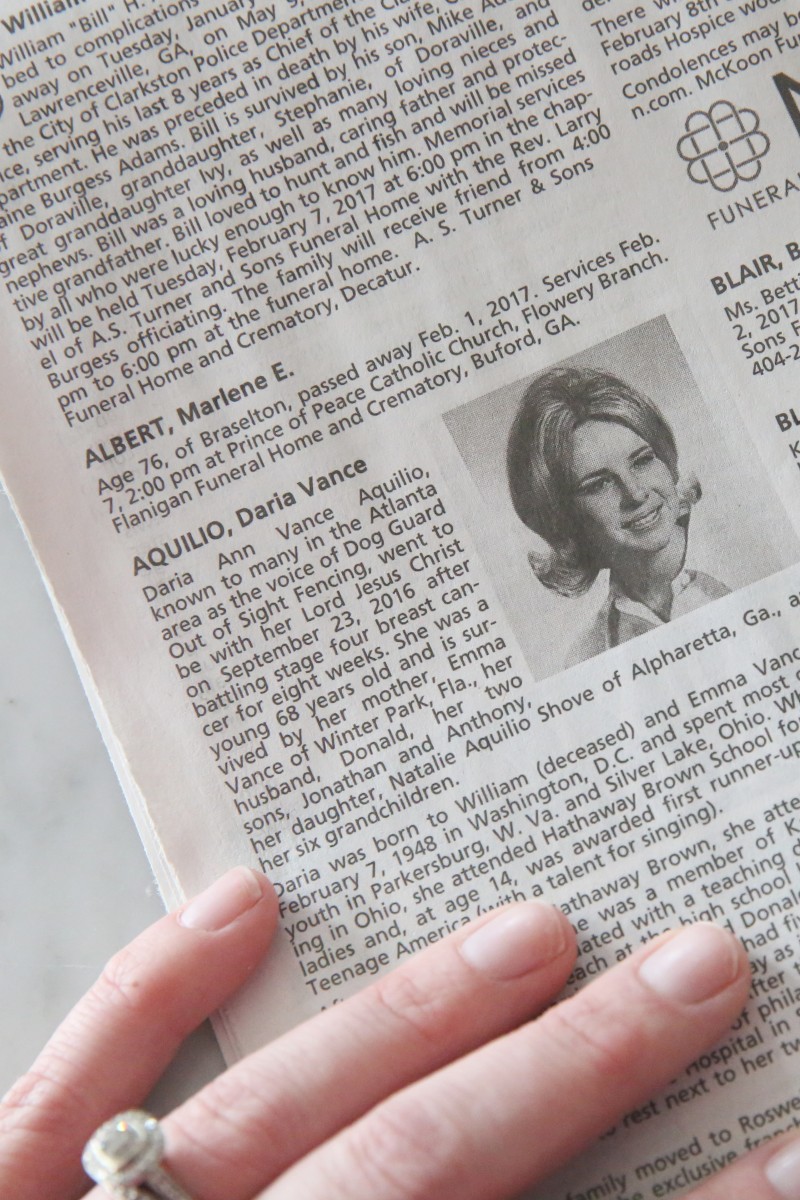 My mother’s obituary ran in the Atlanta Journal-Constitution today. Although she died in September, there were some logistical and emotional cards at play that led to the delay in printing her obit, but now that four months have passed, it was time.

There’s this serious, ironic over-arching theme that God seems to be pressing into my life lately — the theme of determining your life, of being purposeful with your time here, of choosing who you want to be and what you want to do with intentionality. This message is blaring in my ears from every direction it seems — from the books I’m reading, the church groups I’m in, the sermons I’m listening to, the conversations I’m having. They all lead back to this idea of contemplating and defining the Who and What of yourself now rather than later.

And then, on top of everything happening thematically in my life, we had to compile my mother’s obituary. Talk about a loud and clear message.

Obituaries are…hard. I mean, distilling one’s entire time on earth down to a few paragraphs? A few sentences? Or, worse, a byline? It horrifies me. I’ve always been haunted by the knowledge that our past took up so much of our time and energy, but will only be remembered in short, sweeping notions. There’s so much that goes into those generalizations, so much that isn’t said, that’s (truthfully) forgotten.

She spent most of her youth in West Virginia and Ohio is accurate, but doesn’t tell of the childhood where my mother learned independence as a latch-key kid to a set of hardworking parents, or of the time her neighbor called the police because she went up to her apartment to let out the dog before heading to her babysitter’s unit — not because the neighbor worried about my mom, but because she hated the dog.

She attended Hathaway Brown School wasn’t even the most impressive part of that story: My mother was fiercely smart and competitive, and when her rival got a scholarship to a well-known boy’s school, my mother immediately marched herself into the most prestigious girls school and asked for an interview. They were so impressed that she was admitted on scholarship, and my grandmother was both shocked and gleefully proud.

She graduated from Syracuse University lumps four years of studying and socializing — FOUR YEARS — into a mere mention of a once-did.

She majored in science and taught high school doesn’t tell of her time spent charming patients, nurses and doctors as a candy-striper in high school or of her unfulfilled aspirations of becoming a doctor.

(Don’t get me started on the few words that cover my parents’ 45-year marriage, the few sentences that memorialize the worse time in my mother’s life as she lost two children, the short paragraph that sums up decades of work she put into her business.)

Yes, she loved children and pets. Yes, she did philanthropic work for Upstate Hospital. But she was more than “just out taking care of someone else’s problem puppies,” she was living a life in between those sentences —  details and dates, emotions and interactions, relationships and hardships — and I don’t want to forget that.

I don’t think I’ll ever look at obituaries the same. They are merely a scratch on the surface of someone’s life, and if helping compile my mother’s has done anything, it’s made me resolute that when it’s time to compile my own, my family will have a lot of life to sift through.

Daria Ann Vance Aquilio, known to many in the Atlanta area as the voice of Dog Guard Out of Sight Fencing, went to be with her Lord Jesus Christ on September 23, 2016 after battling stage four breast cancer for eight weeks. She was a young 68 years old and is survived by her mother, Emma Vance of Winter Park, Fla., her husband, Donald, her two sons, Jonathan and Anthony, her daughter, Natalie Aquilio Shove of Alpharetta, Ga., and her six grandchildren.

Daria was born to William (deceased) and Emma Vance on February 7, 1948 in Washington, D.C. and spent most of her youth in Parkersburg, W. Va. and Silver Lake, Ohio. While living in Ohio, she attended Hathaway Brown School for young ladies and, at age 14, was awarded first runner-up in Miss Teenage America (with a talent for singing).

After graduating from Hathaway Brown, she attended Syracuse University, where she was a member of Kappa Alpha Theta sorority. She graduated with a teaching degree in science and went on to teach at the high school level. In 1969, she met and later married her husband Donald, a retired attorney. They were married 45 years and had five children, two of which (Jason and Chelsea) passed away as infants and were interred in Fayetteville-Manlius, NY. After the deaths of her two babies, Daria did a great deal of philanthropic work for the pediatric unit of Upstate Hospital in Syracuse. Daria was creamated and laid to rest next to her two babies in October of 2016.

Daria and her family moved to Roswell, Ga. in 1987 and, in 1992, she became the exclusive franchisee of Dog Guard underground fencing in the Atlanta vicinity. When she was not in the office, many of her customers would hear her message that she was “just out taking care of someone else’s problem puppies.” She loved children and pets, especially of the canine variety. She remained the owner and voice of Dog Guard Atlanta until her passing last September.

She is greatly loved and missed by many. Daria, rest in peace in the arms of your loving Lord and Savior, Jesus Christ. 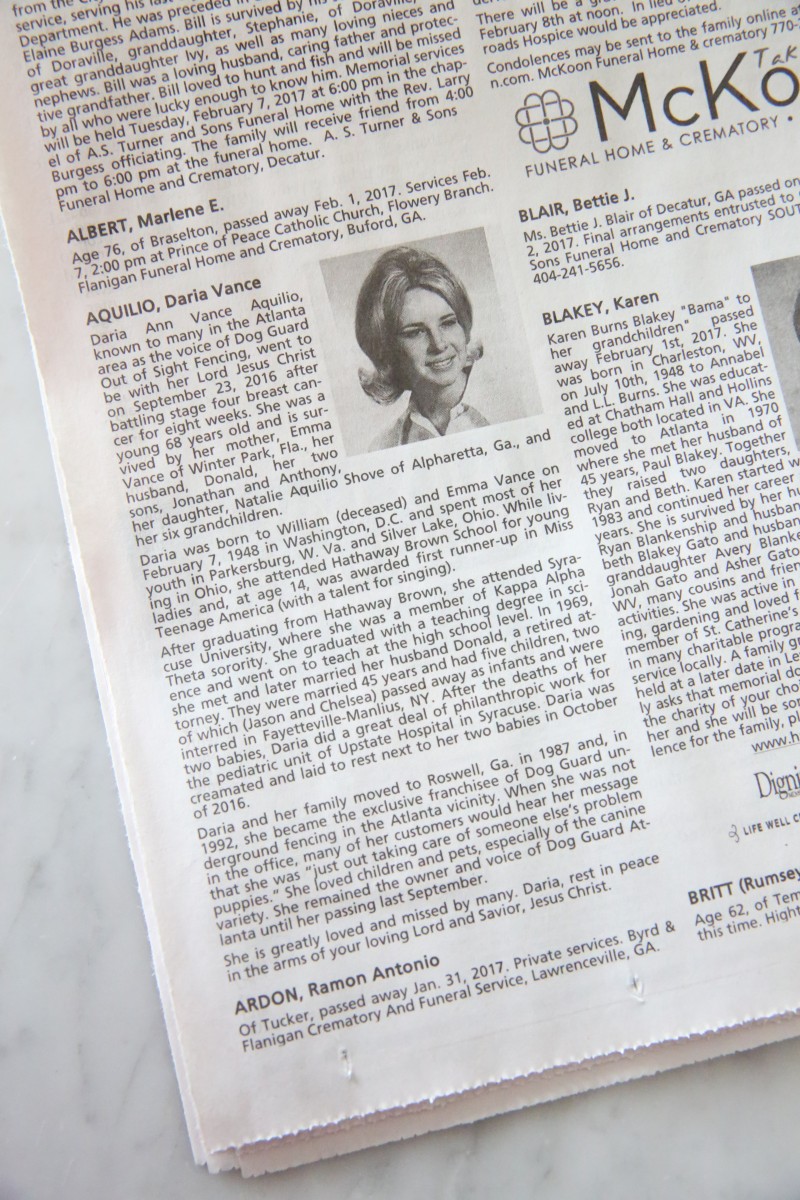