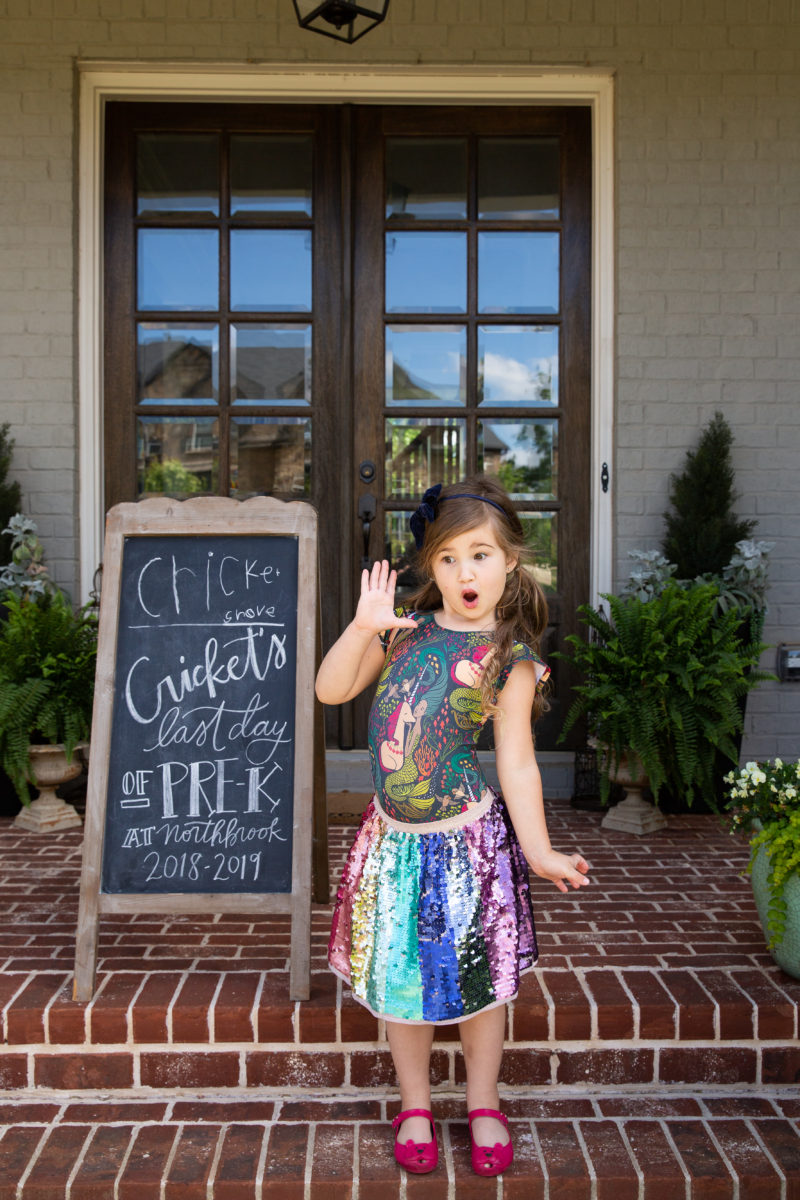 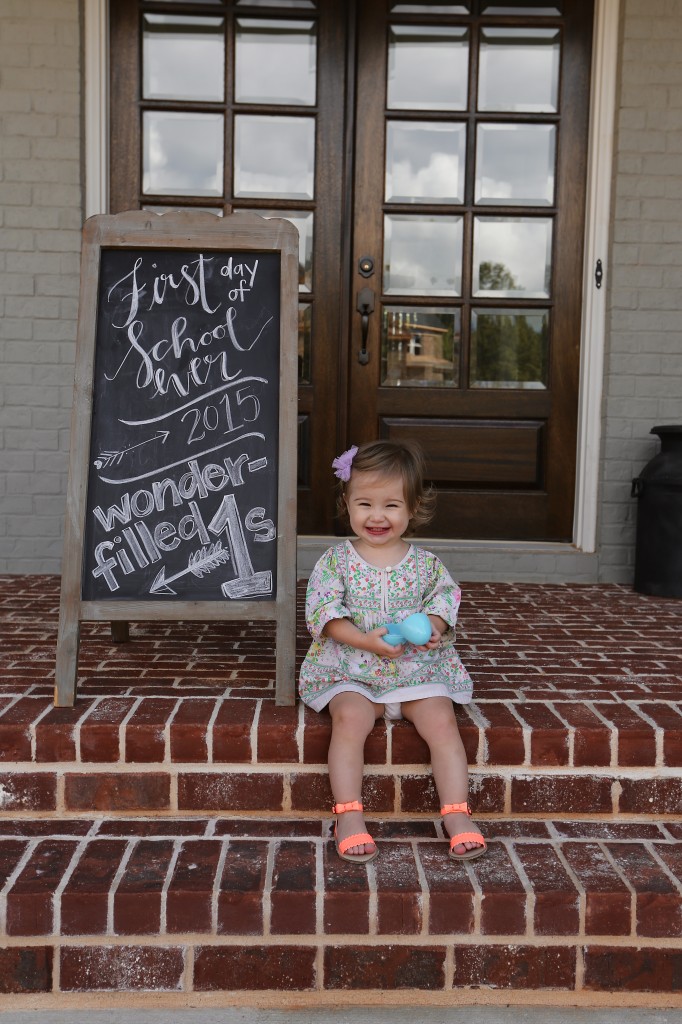 (See more of Cricket’s first day of preschool ever.)

Today, as I walked Cricket out of preschool, a chapter closed behind me along with the doors to the church.

The thing is, most of the seasons of motherhood up until now have been gracious enough to slip away quietly in the night. Babies become toddlers bit by bit, not all at once. It’s as if they know that saying goodbye over and over and over in a thousand different ways would to be too much loss for one person, so the seasons seem to just push the newest and most exciting thing to the forefront (“Look she’s peeing in the potty!”) and then silently back away when you’re distracted. You’re left almost completely oblivious at their passing — one day you just look around the house and think, Something’s out of place. And then suddenly you realize there isn’t a diaper in sight! Most mothers don’t stand woeful and teary-eyed in the diaper aisle and think, “Well, this is the last box of nappies I’ll ever buy.” The season of diapering just kind of…fades. At some point you just happen to notice that somehow you have marched forward, unconscious and unaware like a sleepwalker, into the potty-trained phase without much thought of what you were leaving behind.

But today is different. Walking out of preschool for the last time was a very distinct, very obvious ending which I’m having a hard time comprehending.

When E.V. graduated out of preschool, I felt sadness — but that sadness was mixed with excitement and anticipation and accomplishment. We were moving into The Big Unknown: ELEMENTARY SCHOOL! I didn’t think much about our preschool itself; we would be back there in a couple months with Cricket. I would still see familiar faces, former teachers, younger siblings; I would park in the same spot, follow the same 9:15 to 1:15 schedule, still panic that I’d forgotten it was t-shirt day. So I didn’t feel the same sense of loss as I do this time around. Today represents the literal end to a seven-year season in our life, the end of our time at Northbrook Preschool and as family with preschoolers.

I’m sure I’ve shared this before, but I came to Northbrook by way of luck. At the time, I wasn’t planning on enrolling 14-month-old E.V. anywhere for another year, and, furthermore, I had a different preschool picked out. But was early August in the South, and I was pregnant with Cricket and hot and miserable and at my wit’s end. I needed a break from mothering, quite honestly. A friend of mine texted me out of the blue one day — an opening had just become available in her daughter’s 1s class, and it was a rare and fleeting opportunity at a desirable school. I’m not sure what came over me, but I (uncharacteristically) didn’t think twice about it. Sign me up.

I called the director of the school that day, and she asked me to come in to see her immediately. I chuckle now at the vivid memory of standing, a bit confused, at the then-unfamiliar glass doors I would come to pass through thousands of times over the next seven years of my life. I remember the hall was dimly lit and it smelled, well, like a school — a little sterile, a little like a crowd had been there recently. There wasn’t any art on the walls, it was still summer, but little bits of the past year’s activities were scattered here and there — a piece of yarn, the corner of a colorful finger painting, a bit of glitter. As I sat down across from the director at her desk, she explained the class’s schedule, what the cost would be, asked if I had any questions. I had one. What if I change my mind? She was puzzled at that one, but honestly I remember feeling like I was in a daze. How had I gotten here, to this moment, so fast and thoughtlessly?

I honestly just wanted to know if I could get a tuition refund if I didn’t like it. She said probably not. But I signed up anyway. (What’s that thing about pregnant women being irrational?) I remember writing the check, pressing my pen into the woodgrain of her desk, and handing it to her with a bit of confusion. Am I doing this? Is this really happening? I reminded myself that it was only one day a week, and if I wasn’t happy, we’d go back to Plan A next year with no time lost. Two days later, I dropped off my oldest daughter at Northbrook for the first time.

And today I picked up my youngest daughter at that same preschool for the last time.

As I’ve tried to navigate all of the emotions swelling in and around me today, I have to say that I’m regretful that this season of freedom is ending. Truthfully, in the midst of it, I never thought of the last seven years as freeing, but as I realize that we’ve accidentally slipped into the phase of structure and afternoon activities and school calendars without even trying, I’m keenly aware of how desperate I am to go back to the days of noon nap schedules and wondering what we’ll do today — perhaps nothing! The days of sitting around, rocking my babies and reading board books being enough to call the day successful are lost. Those days live only in my memory now, and thinking of them hurts. Yes, they also bring me joy, but that joy is completely entangled with the feeling of loss. And helplessness.

So, as we drove away this afternoon, I could literally feel the weight of the pages as a chapter in our lives closed. My babies aren’t babies anymore; they aren’t even toddlers, or preschoolers. In some way, the preschool season has been like a tiny little garden surrounded with a white picket fence. For seven years, I stood outside that protective fence, watching my girls wander the garden, picking wildflowers and inspecting rocks and crushing bugs. I’ve seen them plant small seeds and wait patiently as they grow. I’ve observed as they mastered their responsibilities, watering and nurturing the world around them. On occasion I’ve stepped foot in the garden, getting to dig in the dirt right alongside them and prune unwanted leaves. I’ve stood nearby as others have helped my children along, taught them how to bring beauty into this world with their own little hands. I’ve watched as the storms have rolled in and out and the excitement in my children’s eyes of seeing what new seedlings have popped up out of the earth after the rain has faded. For seven years, I’ve leaned eagerly against that white picket fence, all the while watching my daughters grow from teetering, toothless, chubby-cheeked babies into, well, kids, and today I called Cricket over to the gate one last time.

Thinking back on that first visit and all of the days in between, I had no idea what wheels I was setting into motion. Once I had handed my money to the director and walked out of her office, I wandered, feeling disoriented in the then-unfamiliar hallways, completely unaware that I was jumping into such a wonderful, wonder-filled season of life. And into such a magical place. Although I’m sad to say that season ended today, it lasted a long, precious seven years. Seven lucky, lucky years. 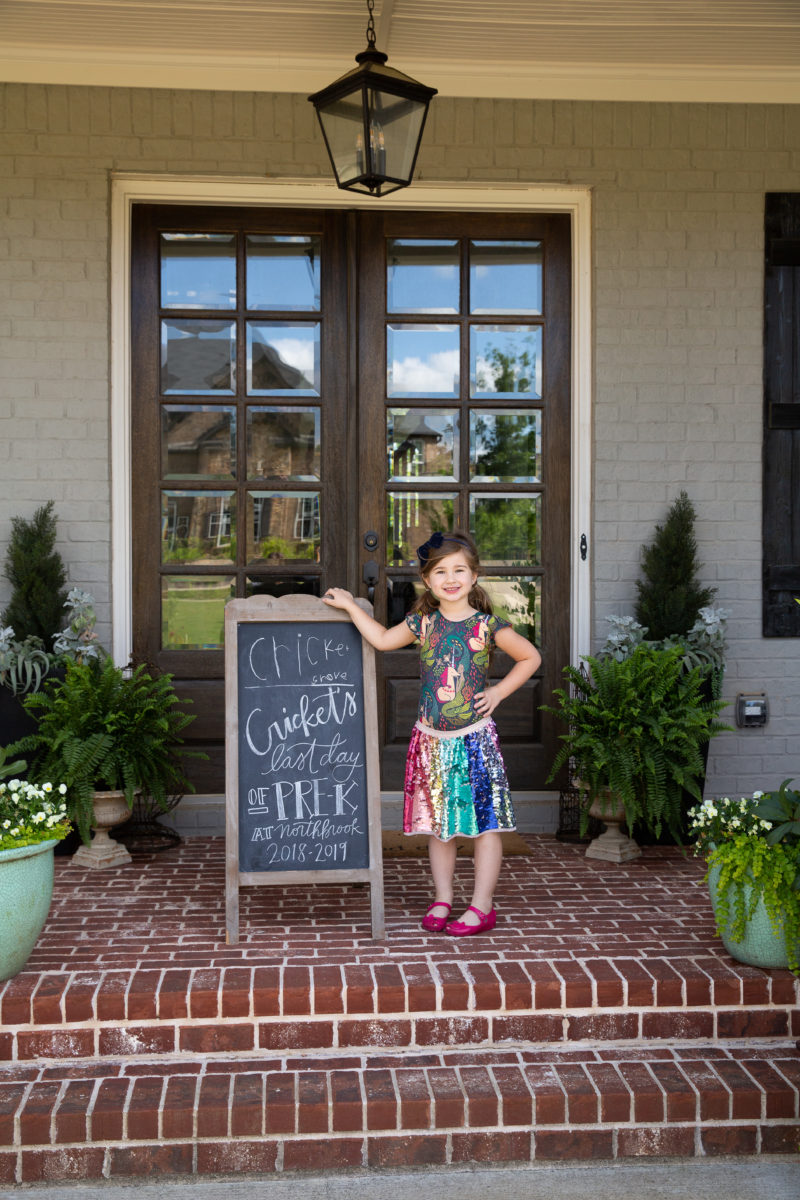 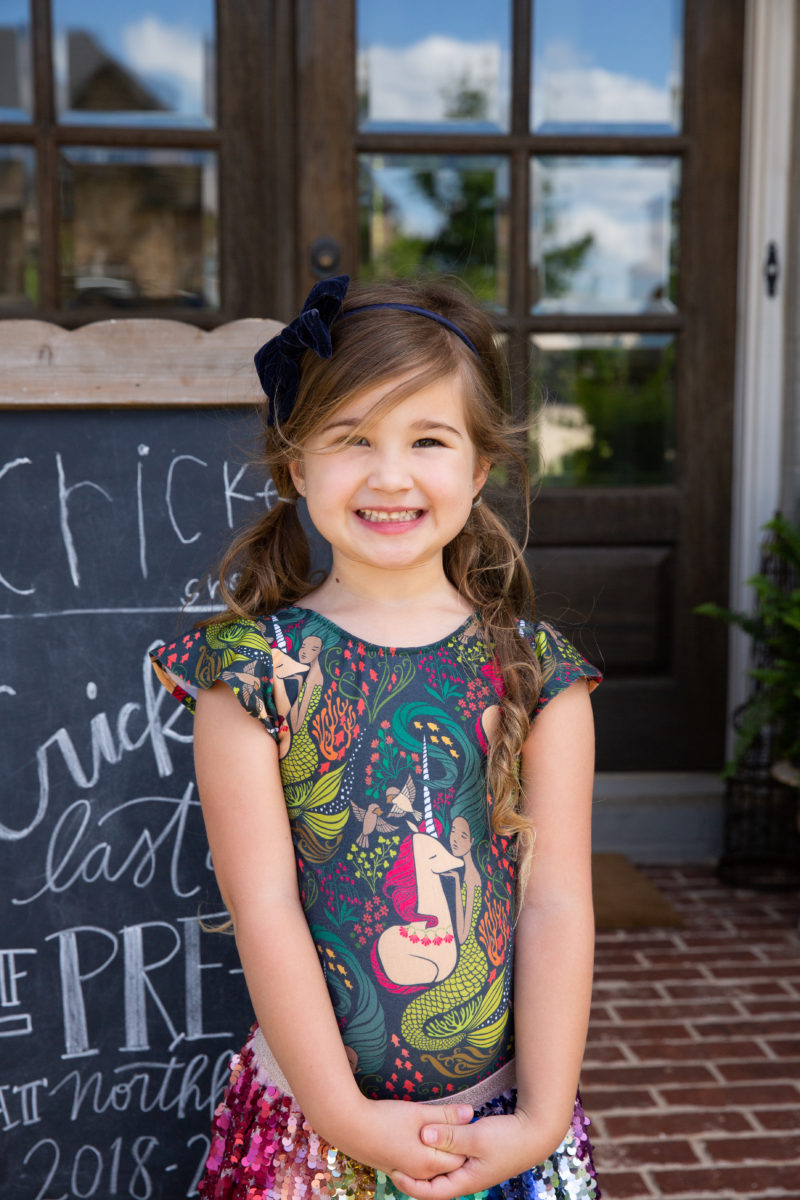 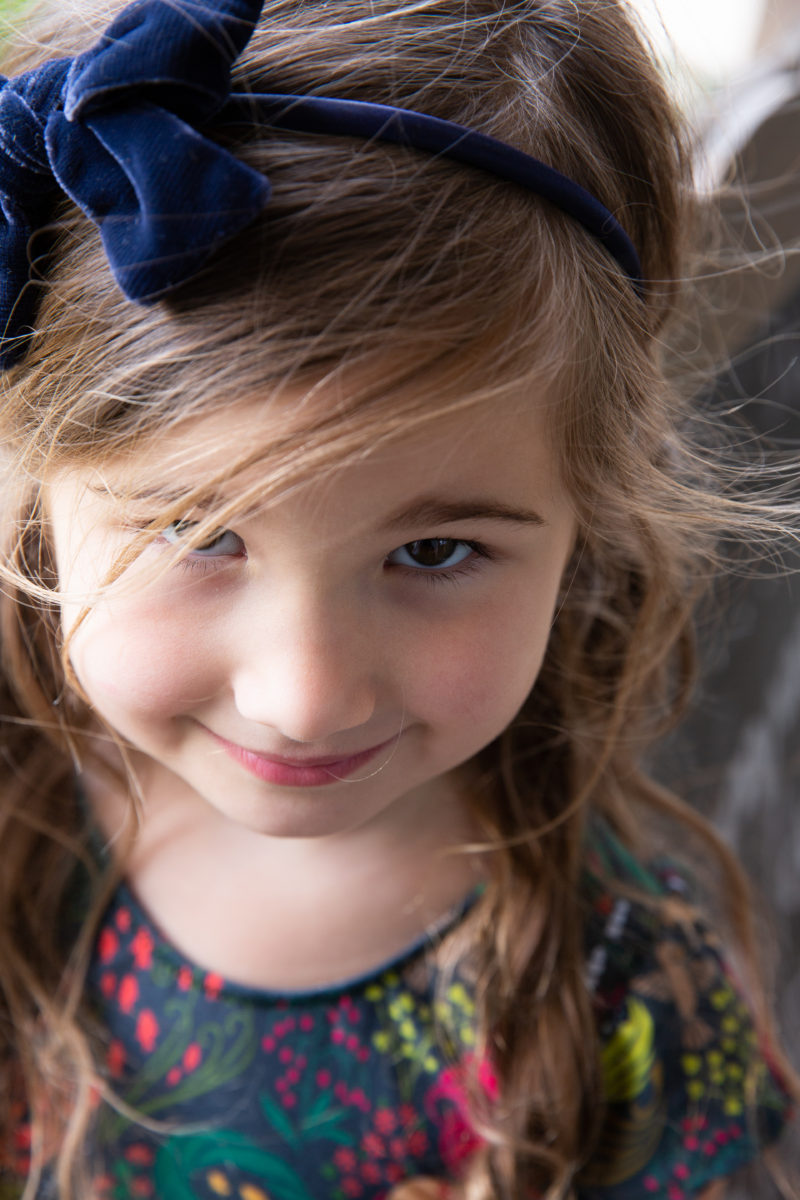 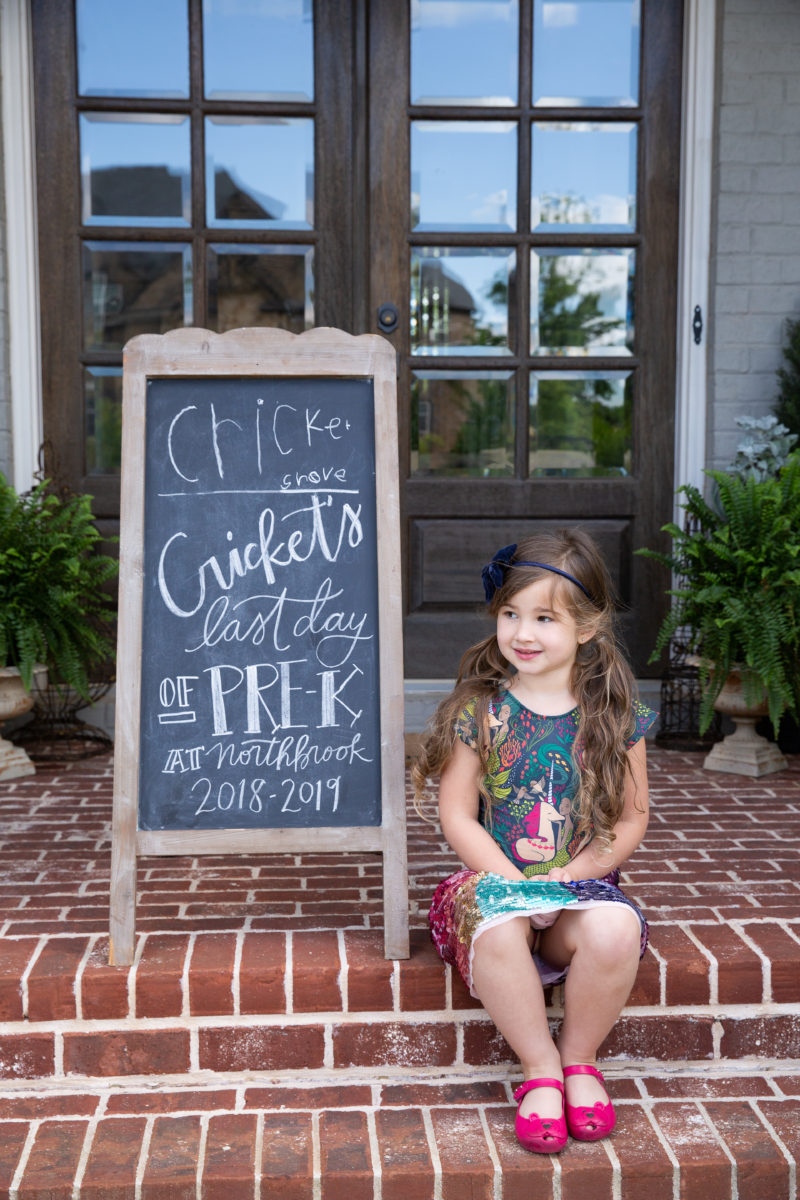 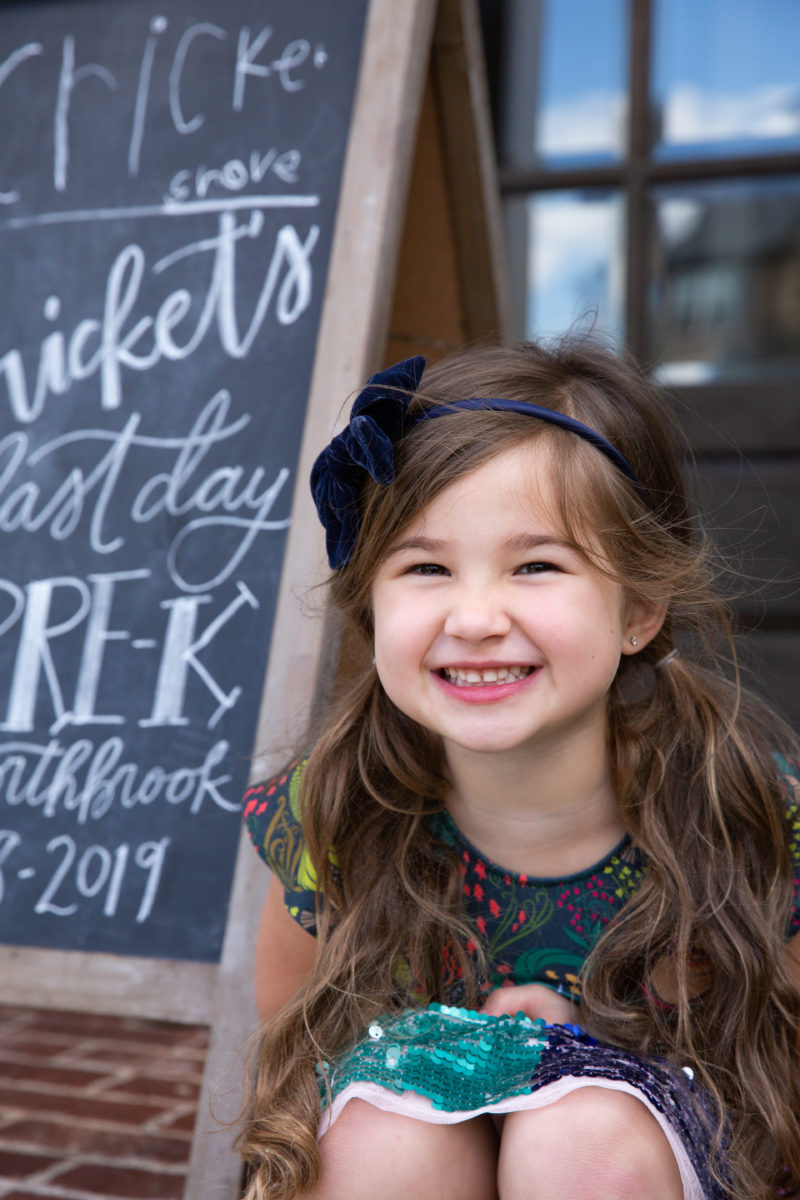 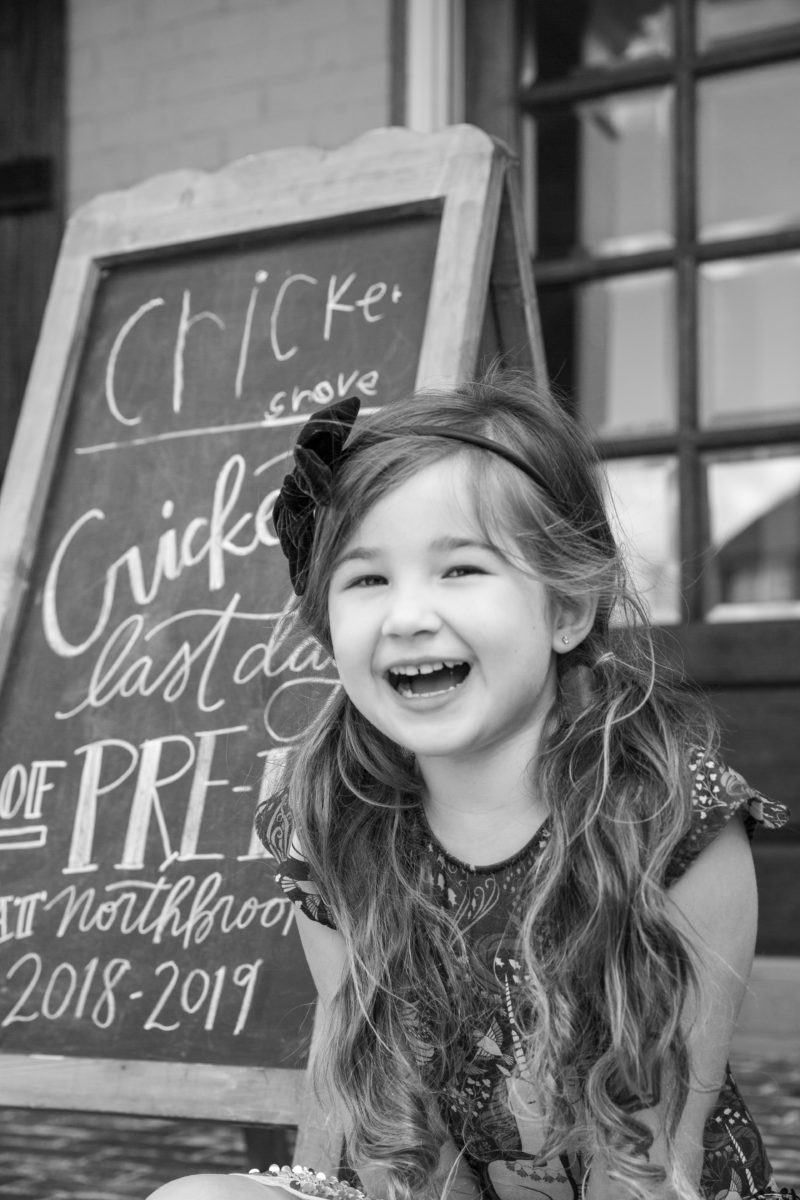 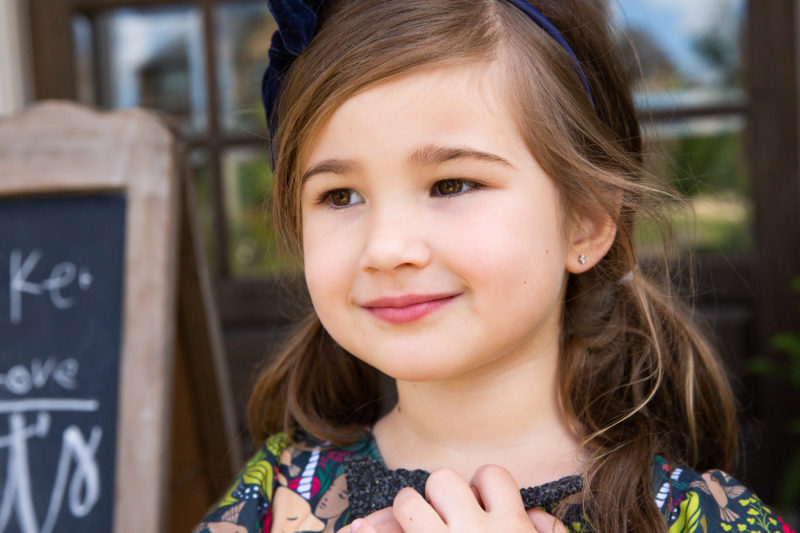 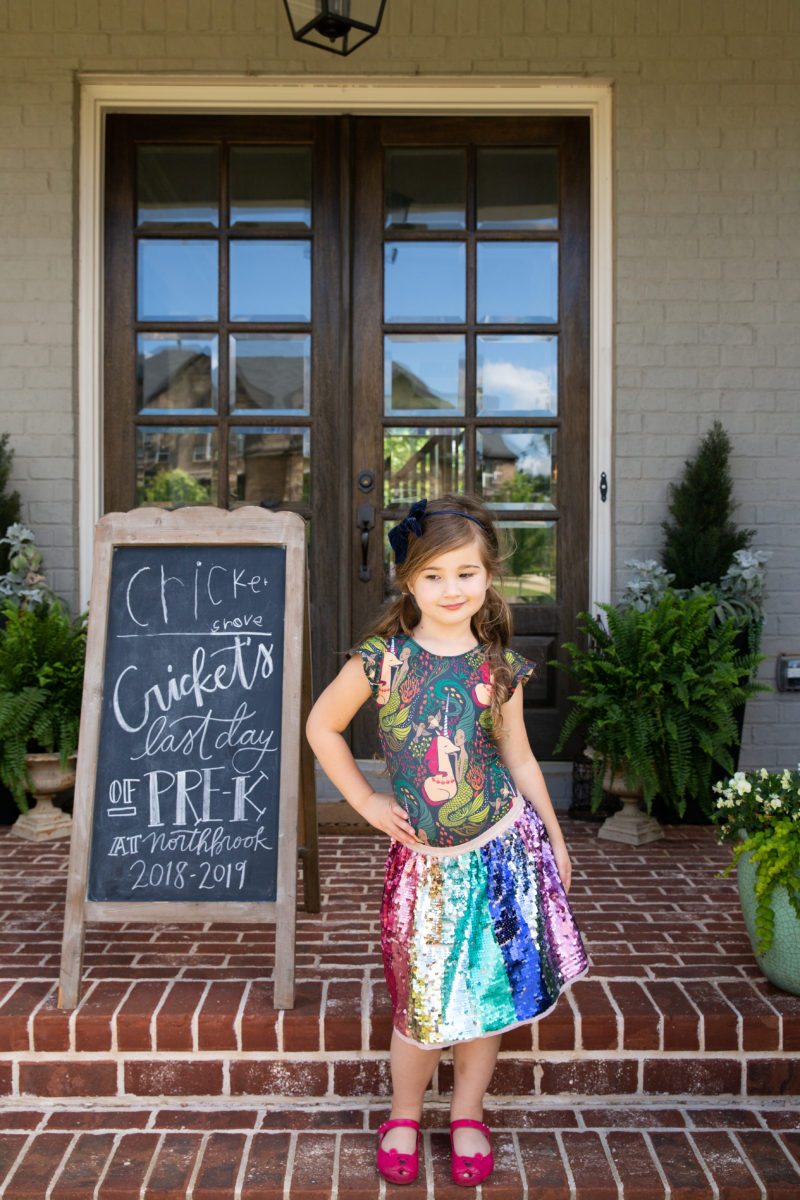 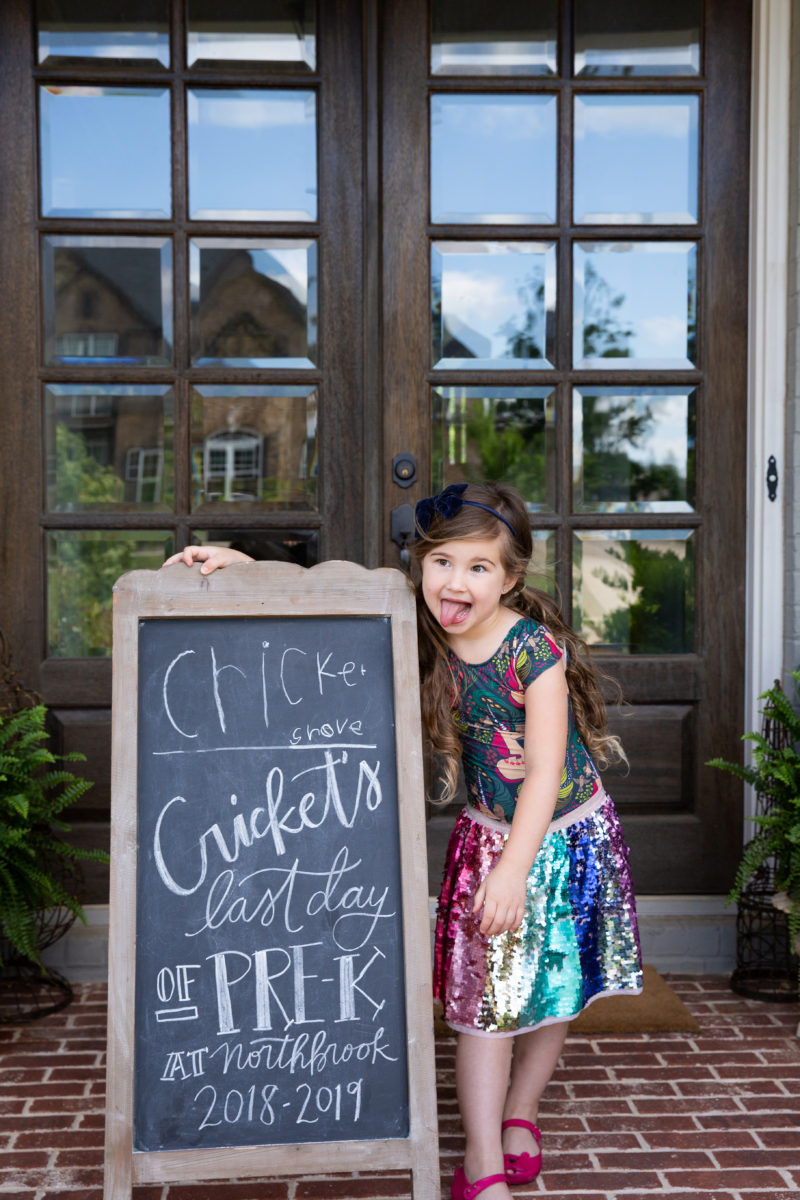 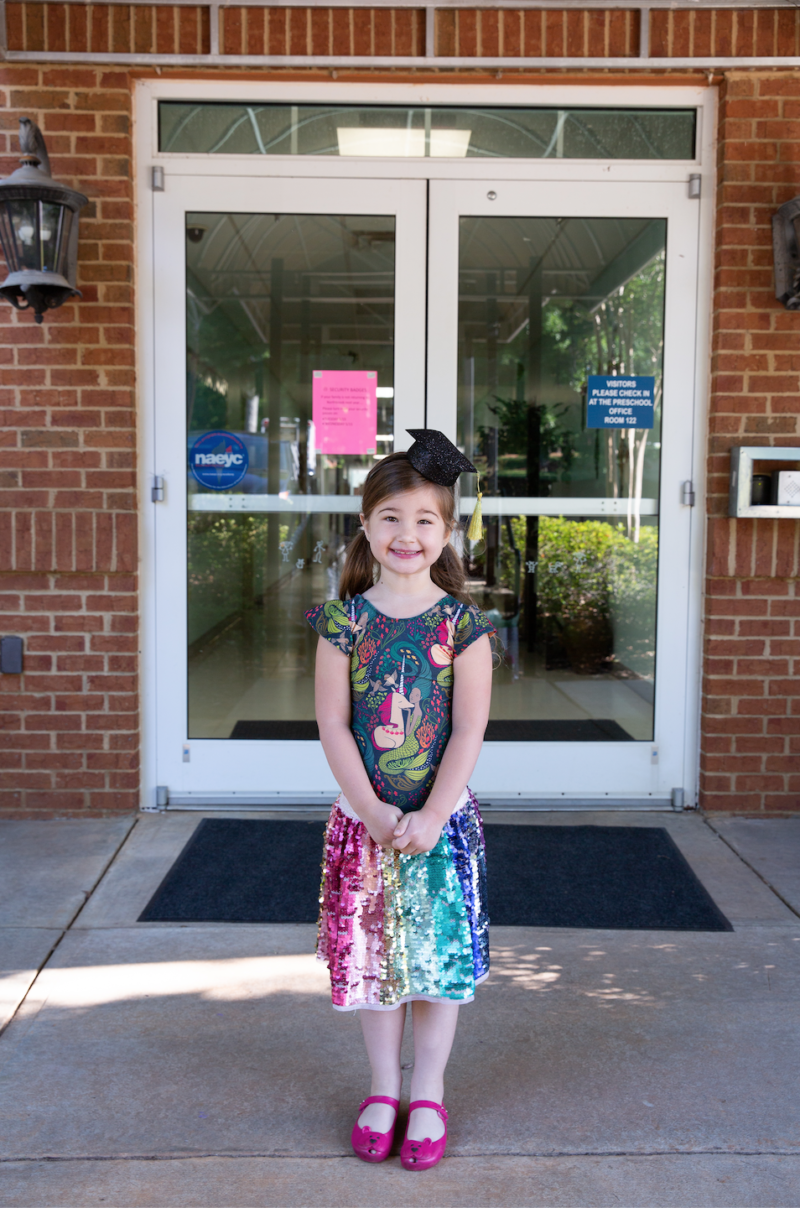 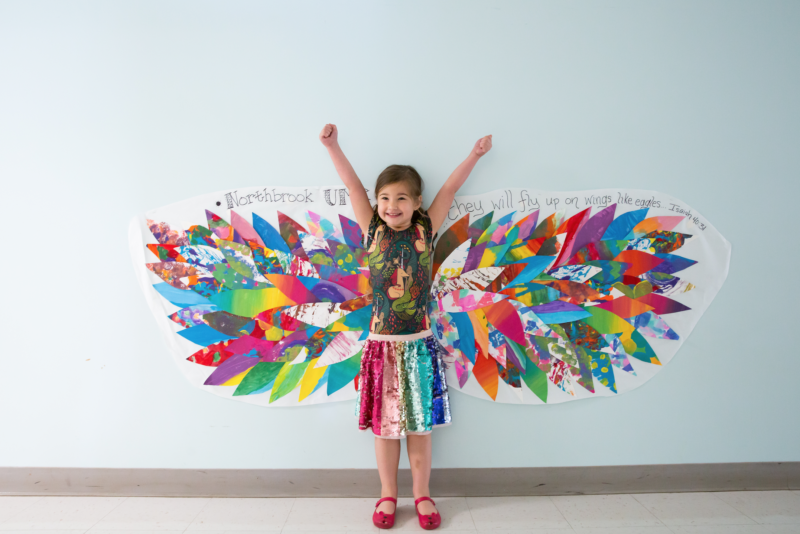 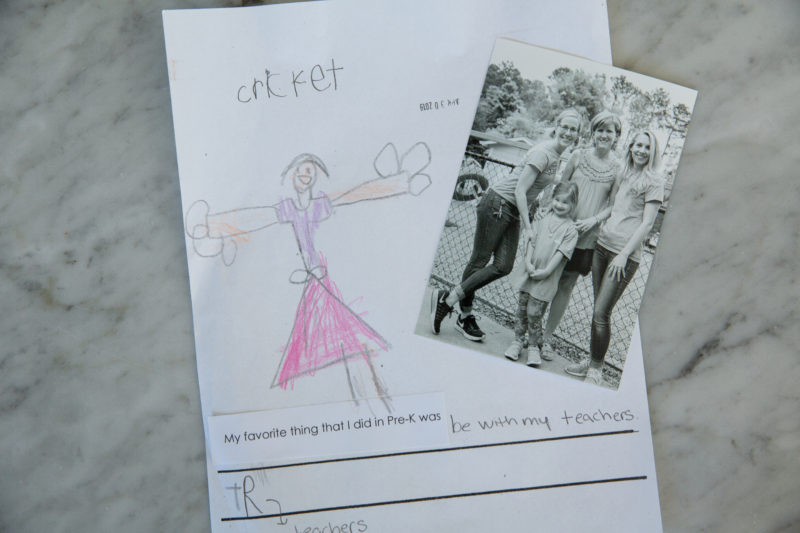 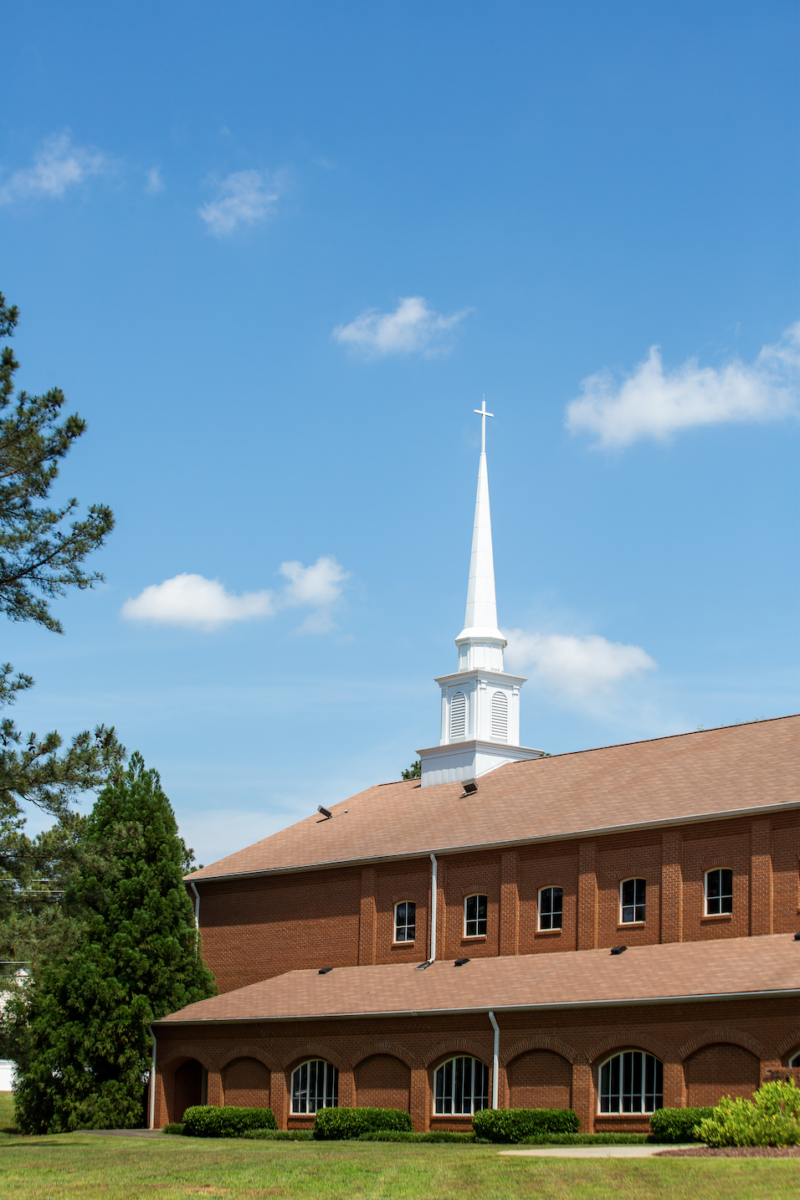 Oh, and here’s Cricket’s first day of Pre-K (thank goodness her “uniform” didn’t last all year…whew). She got a little taller and learned to write her name, but that hair / attitude / mischievous grin? #same 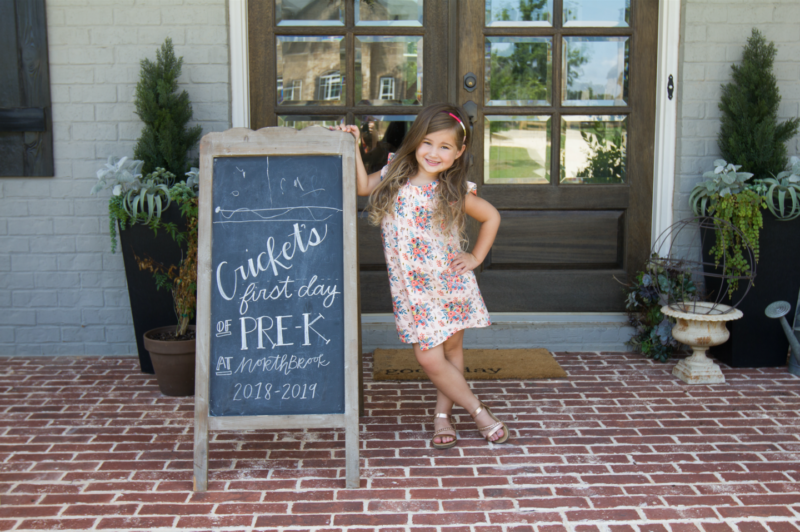 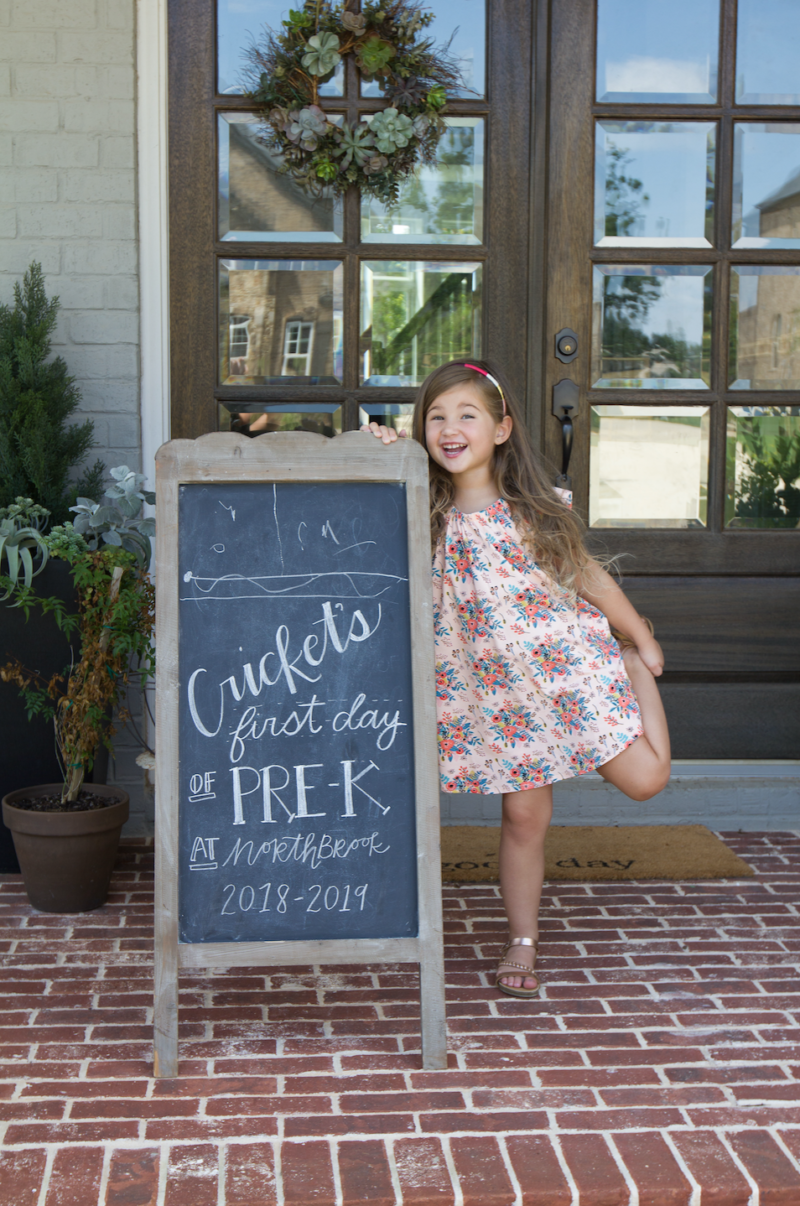 A few things we gave as end-of-year gifts to her teachers + the Garden Room at Northbrook:

Each child gave us a descriptions of our teachers, and we inscribed the words on clay eggs for our class gift. 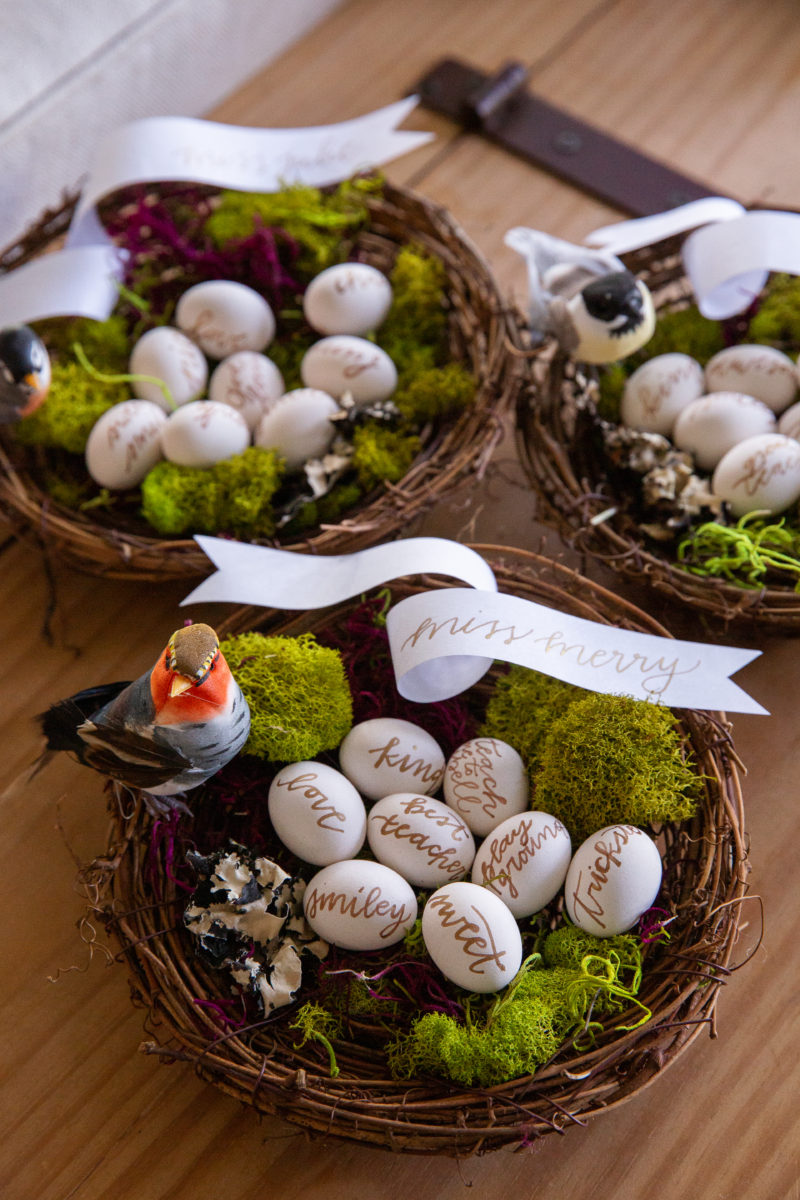 Cricket and I picked out a book to donate to our classroom, The Garden Room, for future classes. 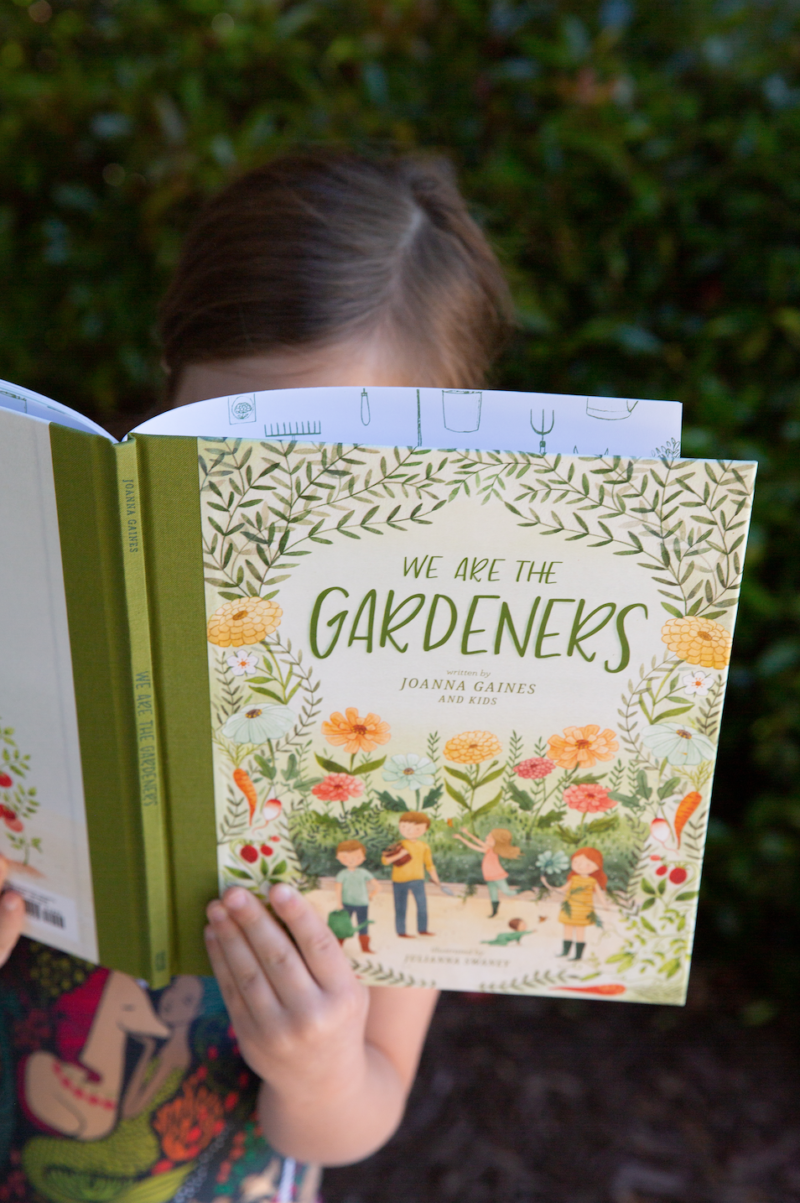 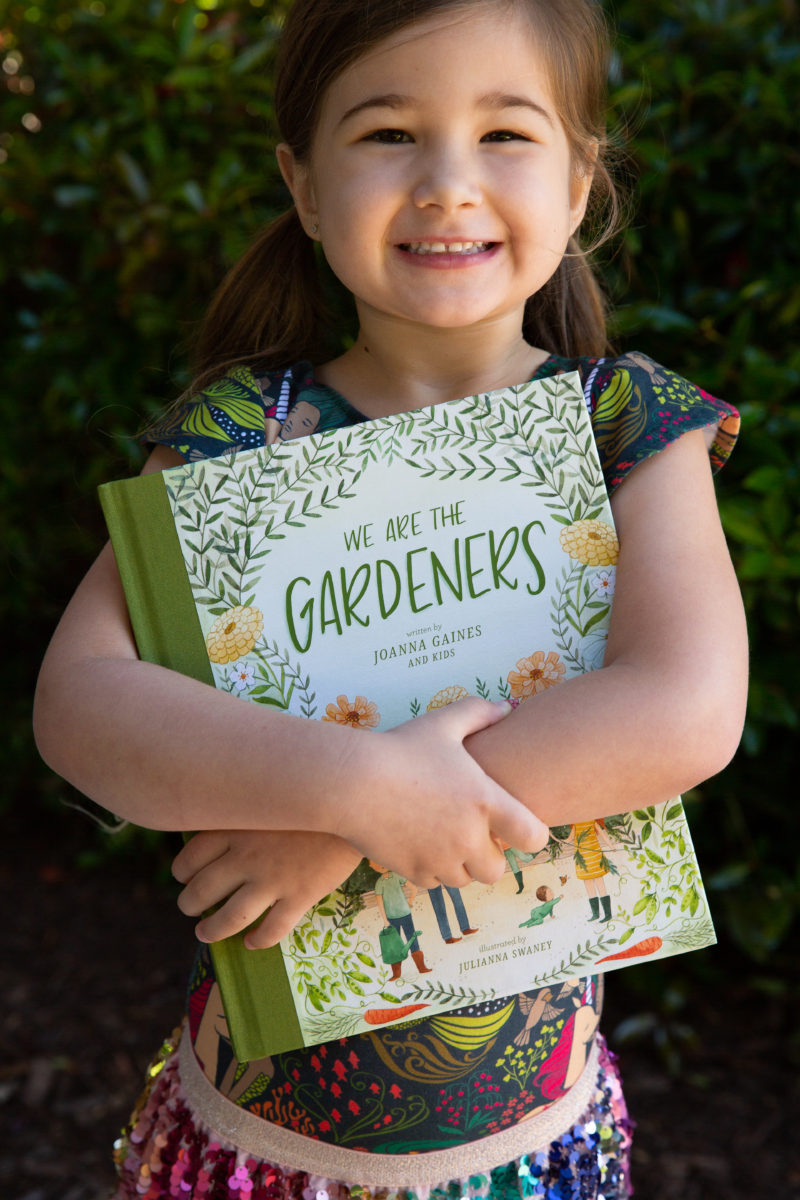 We gave our main teacher a “custom” bird feeder, haha! 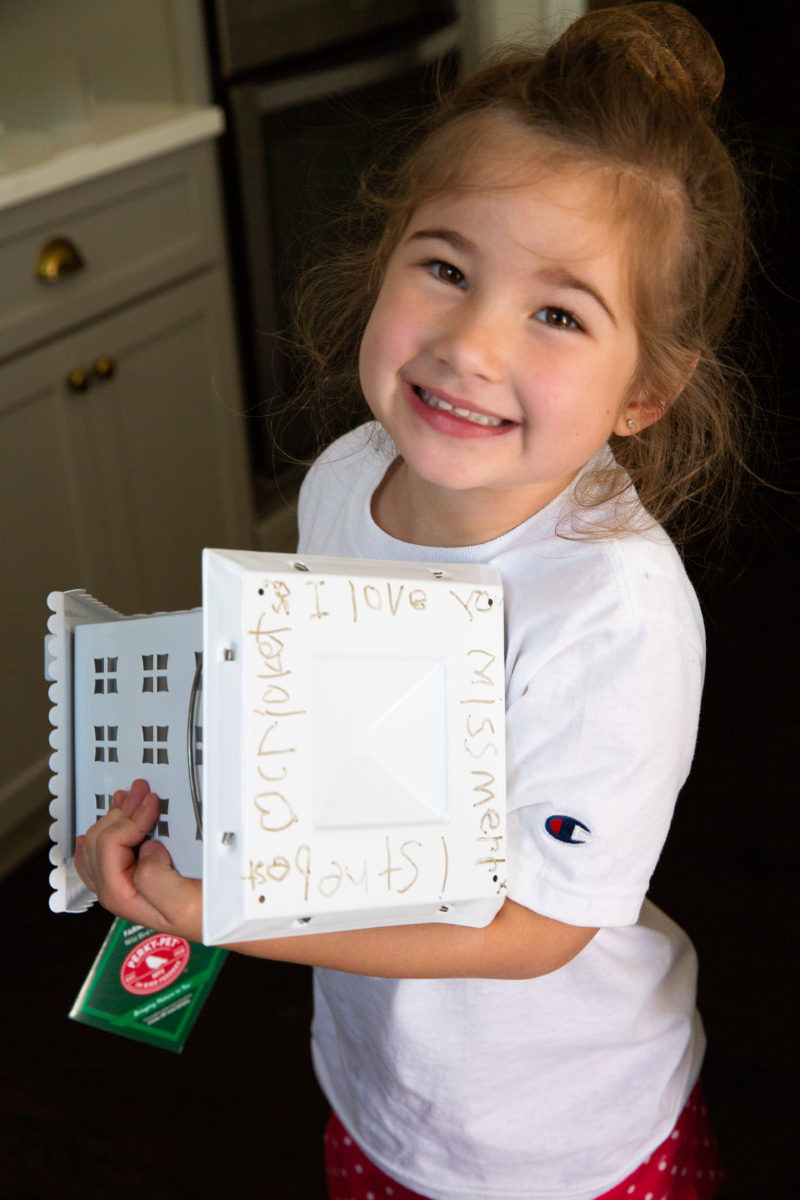 And the annual class drawing! 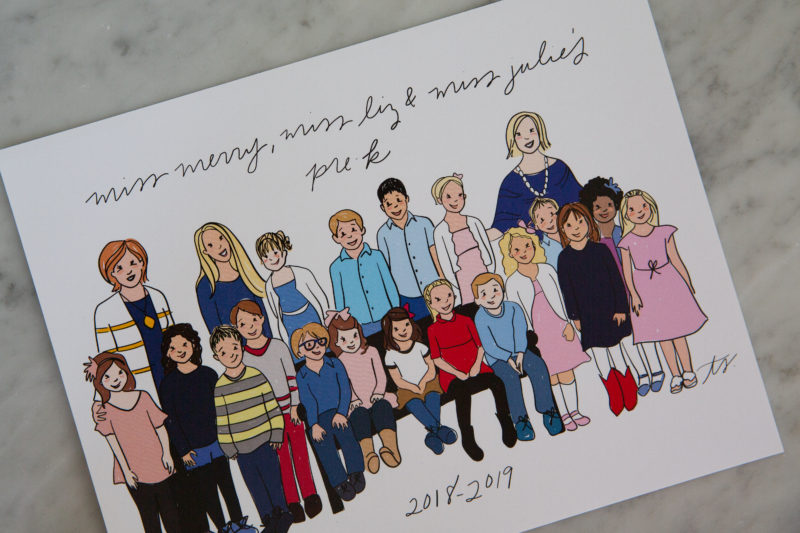 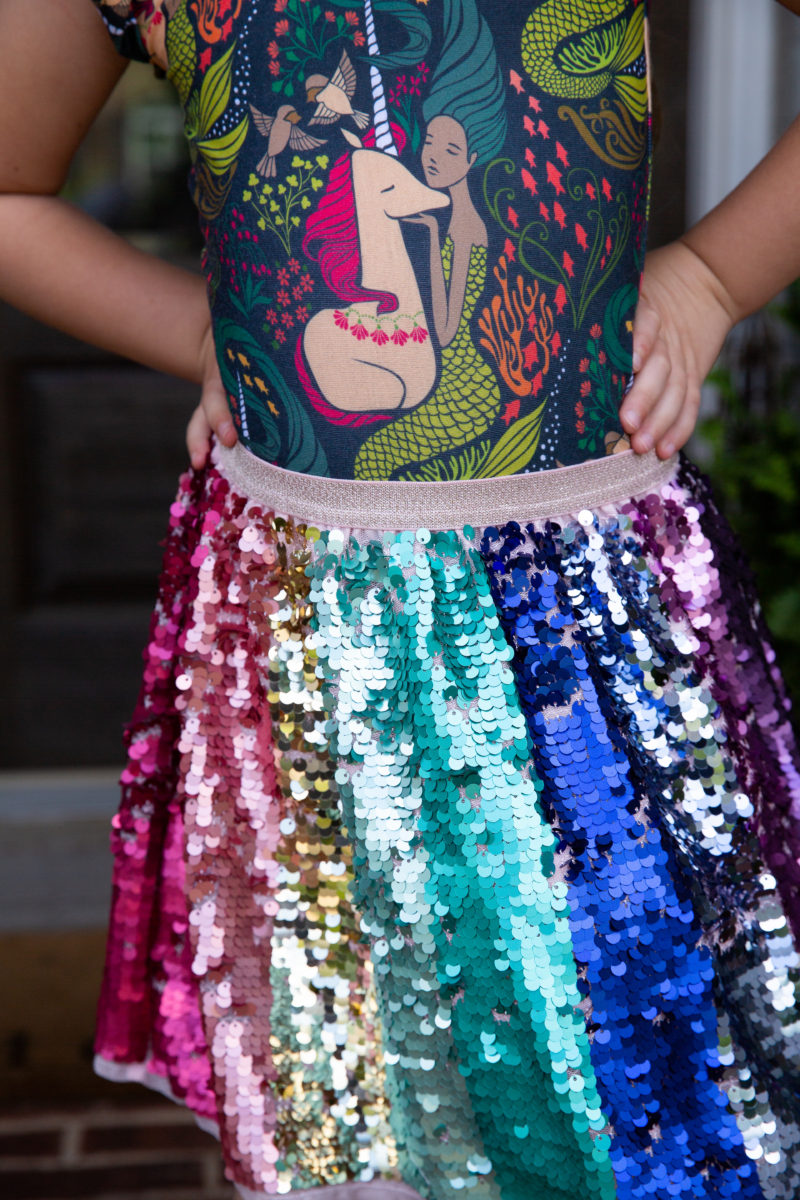 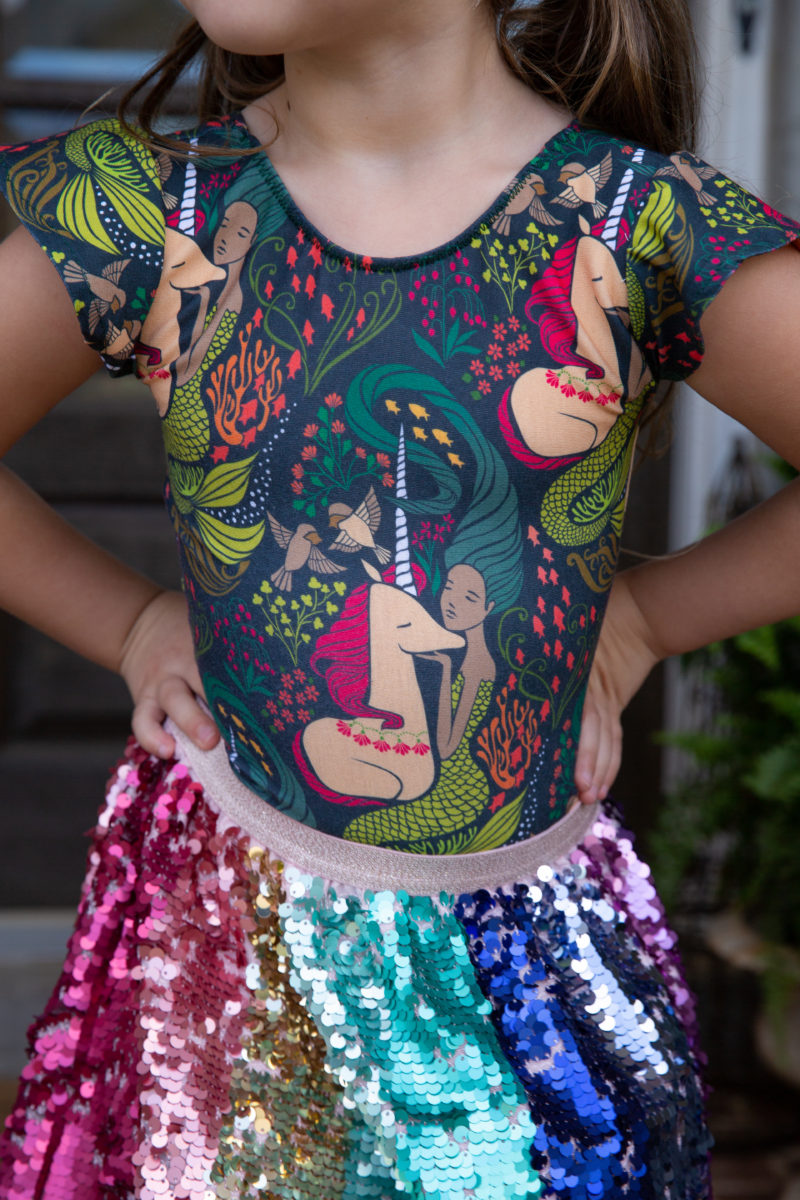